Dungeons & Dragons: Dark Alliance is a co-op hack and slasher set in the Dungeons & Dragons universe and was developed by Canadian coders Tuque Games, who previously gave us Livelock, a co-op top-down shooter that I’ve somehow got no memory of despite getting the Platinum on it back in 2018.

As you can imagine, Dark Alliance is an entirely different animal to that game.  What we have here is a co-op focused brawler that takes the settings, characters, monsters and loot from its universe and channels it into a surprisingly focused set of levels.  The last time we saw something like this was in Kingdom Under Fire: Circle of Doom which was an RPG with great combat and almost linear levels.  We absolutely loved that game so we’re not against something doing similar things. 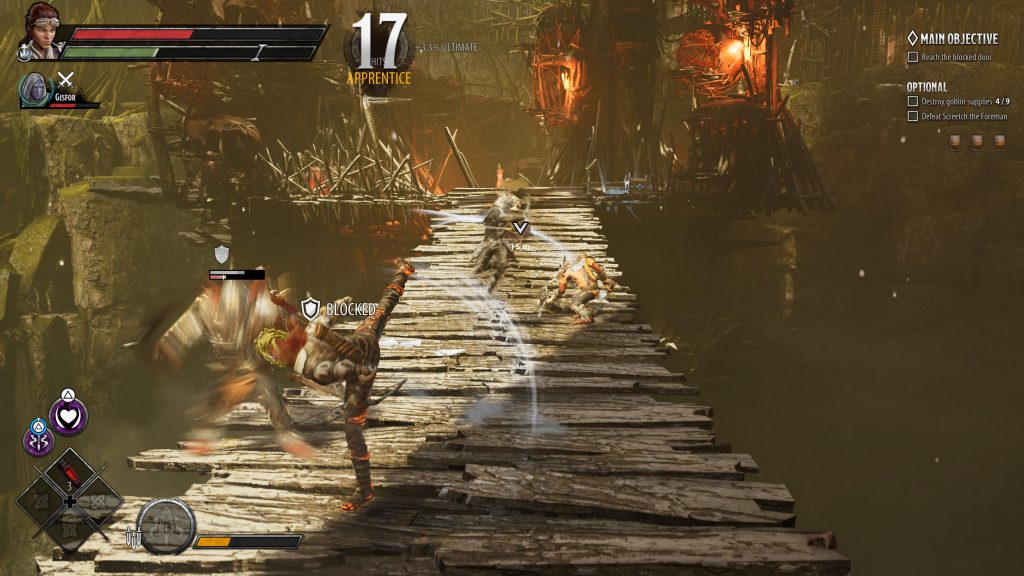 Early impressions with Dark Alliance are actually very good.  There’s a decent CGI intro (something we’re not used to seeing all that often thanks to us mainly reviewing indie games with non-existent budgets) and this sets the scene nicely.  Serious D&Ders will get more out of this than other players as it is set in a specific D&D timeline (Forgotten Realms) and set in the Icewind Dale region, all penned by Chris Perkins who has a history with D&D that goes back to the ’90s.

You get a choice of four characters to play as too, all of whom are actual D&D characters from campaigns past.  They fall into the four expected classes.   Drizzt Do’Urden is your rogue style character, who can attack with speed and stealth.  Cattie-Brie is your ranged option, using a bow to attack from distance (while having some decent martial arts chops for melee).  Wulgar is your standard big dude with a hammer who puts a lot of damage on single targets.  Bruenor is your standard all-rounder melee character.  Every character has ranged attacks but really Catti-Brie is the only one who can deliver in this area reliably.

A hub area offers an upgrading station for your characters but, once you’ve done the brief tutorial, you’ll be looking to get into the main campaign.  This offers seven overall levels, each split into three acts.  These acts task you generally with the same few objectives.  Blowing things up with explosive barrels, finding specific areas and taking on bosses.  Secondary objectives are there also, and these usually ask you to kill additional elite characters or to find collectibles (heads up:  you will nearly always be one short at the end of the mission). 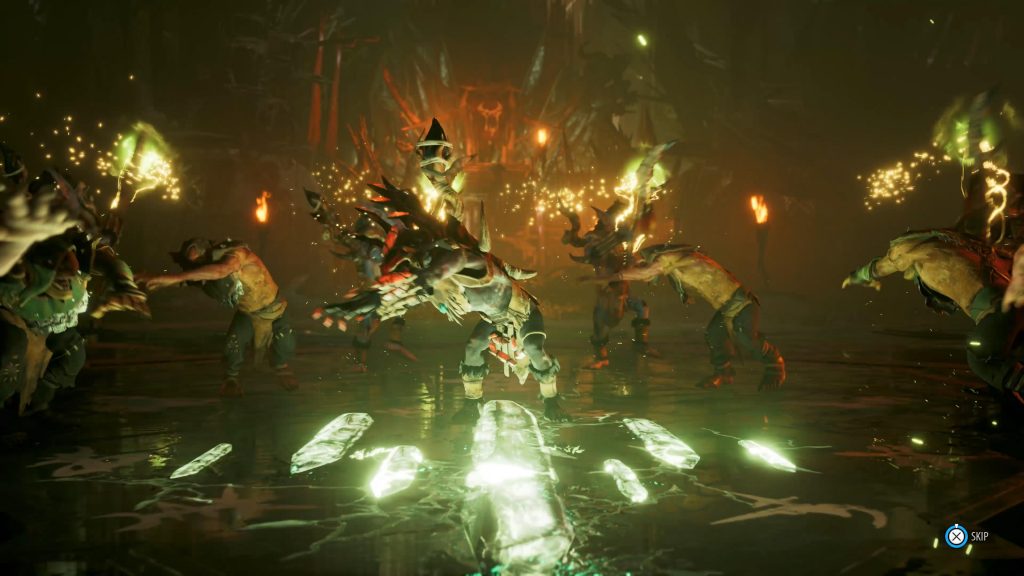 In terms of gameplay though it’s all pretty standard stuff.  You run around the levels, which are small and a little complex (although a handy marker always tells you where to go) getting into scraps and finding loot.  It won’t be long before you run into enemies and you’ll want to dispatch them quickly.  You can do this using standard attacks or more powerful ones and of course you have those ranged options and even a special attack (that has to be charged up over time).  It’s all quite typical but these skirmishes can be quite intense, especially if you end up fighting an elite or two backed up with regular enemies, archers and sorcerors.

However, you can’t button mash your way to success because stamina is a real issue in the game.  A few powerful attacks will soon drain your stamina, leaving your flailing like a heavyweight boxer who hasn’t managed to score an early knockout.  Running out of stamina is a constant thing and very much tempers the flow of combat and therein lies the game’s biggest problem.  It doesn’t really know what it wants to be.  Some brawlers are about timing and precision (your Ninja Gaidens for example), others are about violence and spectacle and some are just about that loot.  Dark Alliance however isn’t any of these.  The combat falls just short of being exciting or complex.  It can be tricky though and so there is satisfaction to be had from emerging out of a tough battle but it’s never something that will get the adrenaline pumping.  That’s due, in part, to the fact that enemies absorb a LOT of damage.  So rather than beasting them Bruce Lee style, you really just wear people down. 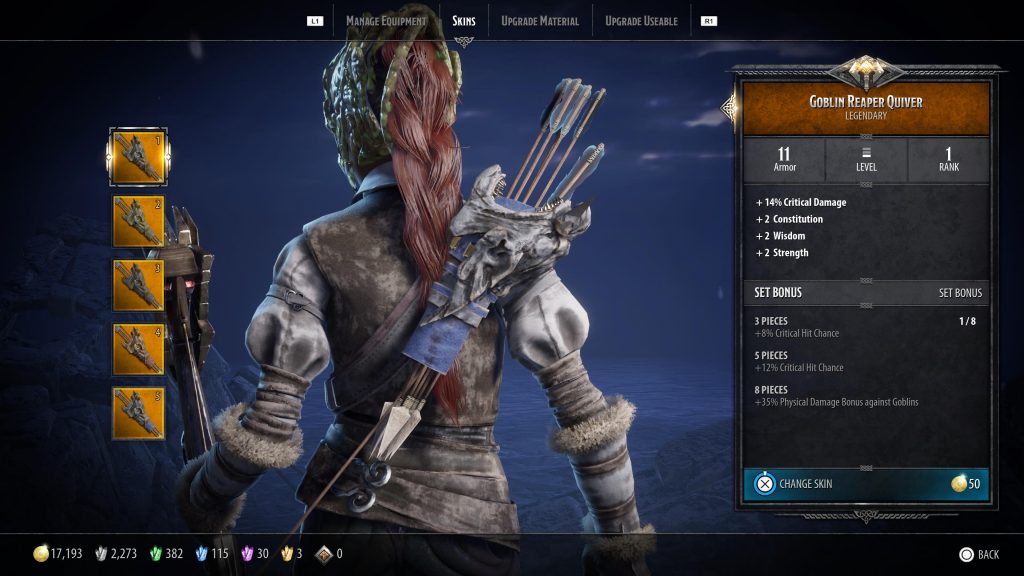 Enemies don’t drop loot either.  This is found in chests that are placed around each level (completing a level also awards you two pieces of loot also).  If you’re going to put loot in a game you really need to do it well.  You want that dopamine that comes from finding the perfect weapon or bit of gear but everything in Dark Alliance is usually just a tiny step up and given that everything has set bonuses attached (and there are so many sets), you’ll often end up holding onto less good gear, just to keep the set bonus going.  Until eventually you have to ditch it because you finally find something good and this will be way before you get a set of eight completed.  It’s just not particularly satisfying and a lot of it all feels very samey.  You can skin up your gear too but you’ll be hard pressed to tell the difference between any of the five colour options each bit of gear has.

Being a game set in the D&D universe, the loot also has a lot of stats involved.  Any given piece of armour might affect your fire resistance or poison or ice etc as well as your character stats such as charisma or dexterity.  Thankfully, you don’t get much loot during missions and so you won’t be ploughing through dozens of items each time you try to arrange your inventory.  Weirdly, you can’t equip or change things mid-mission.  All inventory and stat management has to be done in the hub world between acts.  Many won’t like that but it does at least keep you focused on the mission at hand. 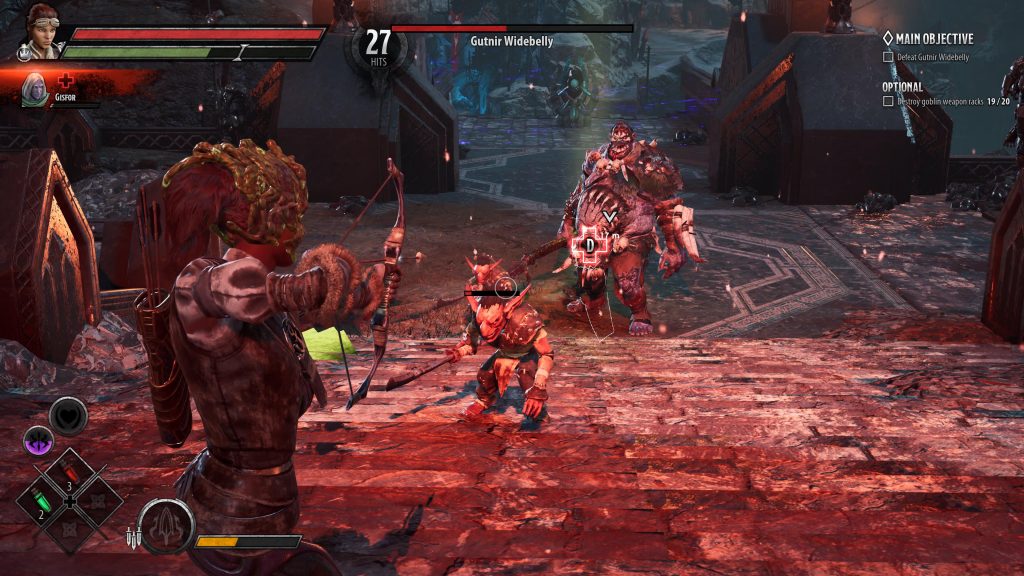 Now all that isn’t to say that there isn’t fun to be had.  Grab yourself a co-op partner or three for some online action and you will find Dark Alliance to have some value.  Oddly, players are somewhat tethered to the host which means you can all go off exploring freely (which is odd as the levels really aren’t that big).  That’s an odd decision.  Also, if you’re not the host, then you’ll find that enemies will attack without you seeing the animation and there will be some noticeable input lag.  The devs are currently looking to patch that but it’s definitely an issue at launch.

As are some of the problems the game has around its animation.  This is evident from the title screen where you’ll see a flag glitching around.  Even as the host I would see large numbers of frames being dropped from enemy animations and the game really struggles to animate lifts when you travel between high and low areas.  Your main character seems to slip and slide over the environment a little too as if they are being animated separately to the ground and then slid across it.  It’s a shame though because the actual graphics are rather nice with some detailed environments and some large, impressive structures to behold. 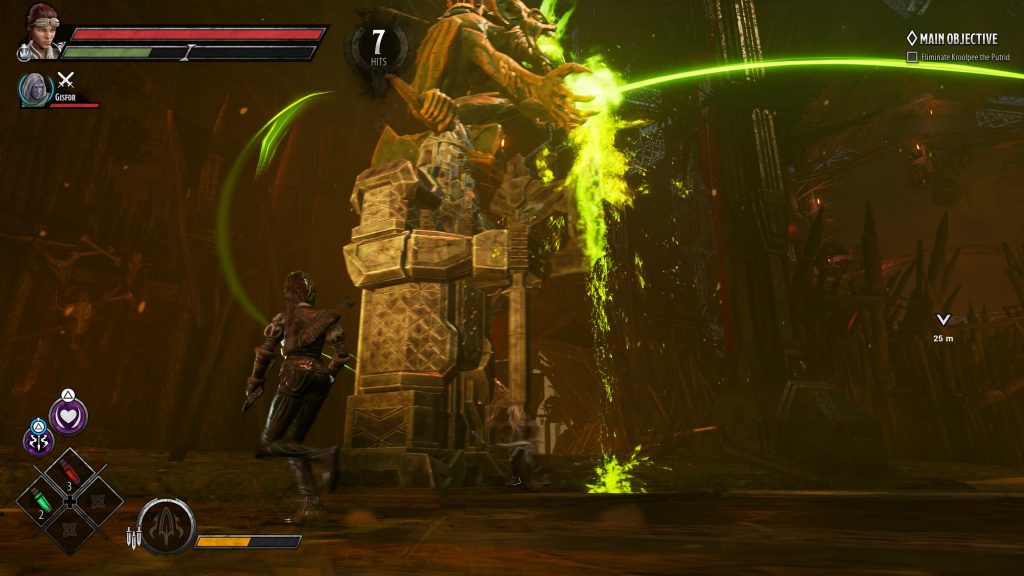 That general lack of finish is evident in the gameplay too.  My co-op partner found themselves knocked out of the playable area and stuck there while I had to finish the final boss battle myself.  We both lost access to our special powers multiple times while playing.  We finished one level and all the EXP and items he earned didn’t count and the act did show up as completed for him so we had to do it all again.  This is basic stuff that playtesting would pick up pretty quickly and so this gives the game the telling feeling that the PS4/5 were not the lead platform by any means.   Indeed, playing on PS5 is quite underwhelming as none of the things we’d want to see (smooth frame rates, haptics and minimal loading times) are there.  You don’t get any of those benefits at all.

That said, in a few patches time, Dark Alliance might end up surprising us.  If they can smooth out the rough edges and tweak the gameplay, this could end up being a solid, co-op experience and we’d welcome that given the game’s mid-budget price (£39.99) but for now the game doesn’t really do anything that it sets out to do.  The combat is ropey, the looting is mediocre and it’s a bit of a mess technically.  The setting and some of the CGI cutscenes will definitely appeal to D&D fans though (kind of like how you can make an average FPS, shove it into the Aliens universe and it’ll do well) but for everyone else, you might want to wait some patches and a price drop.

Dungeons & Dragons: Dark Alliance
5 Overall
Pros
+ The bigger fights can be enjoyable
+ Online co-op for up to four players
+ Some good graphics and CGI
+ The loot and stats give some depth
Cons
- A bit of a mess technically
- Loot is uninspiring
- Lacks variety between levels
- Lacks polish in all areas
Summary
Fans of Dungeons and Dragons will enjoy the characters and setting of Dark Alliance but the game doesn't do much with its combat, exploration or looting elements and ends up feeling underwhelming in all areas. If the game gets the technical improvements it badly needs and can tighten up the gameplay, then this could be a decent co-op brawler. But for now it all feels a bit unfinished.