From Serbian developer Brave Giant Studio comes Queen’s Quest 2: Stories of Forgotten Past, the latest hidden object title from Polish publisher Artifex Mundi. We didn’t play the first Queen’s Quest though we do have previous with Artifex title My Brother Rabbit.

Queen’s Quest 2 is a sumptuously illustrated animated picture book straddling several Grimm fairy tales as well as other myths and legends including Robin Hood. But to be honest, if you’ve played any of the  previous Artifex Mundi games you’ll have a reasonable idea about what to expect. 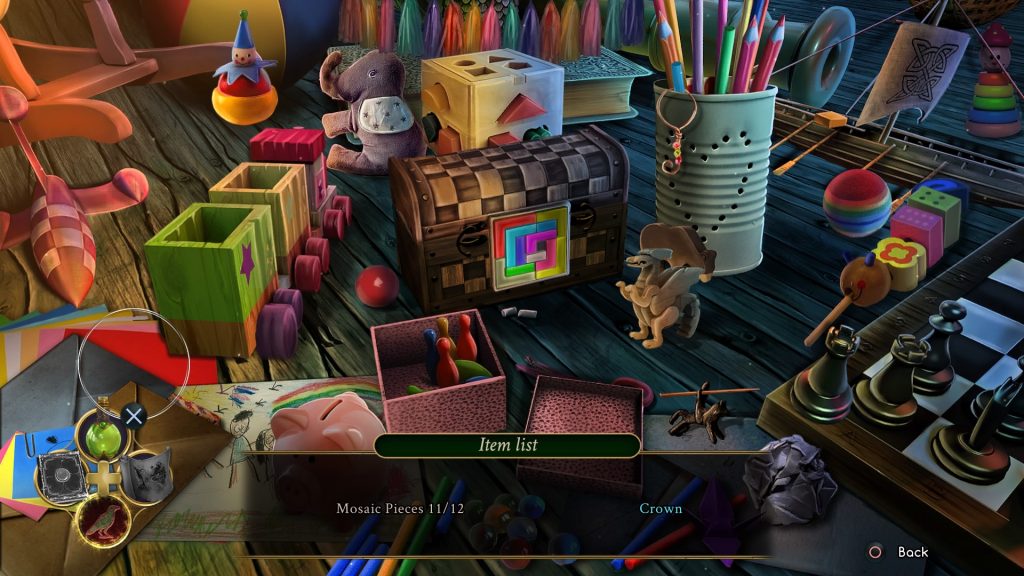 That being intricated designed levels with individual items to discover as well as questlines to fulfil, in this case a medieval whodunit. The voice acting and animation are pretty much redundant, your main aim is to solve puzzles and minigames of which there are plenty.

They fall into three main types: the titular hidden objects, one-shot minigames and a rudimentary alchemy minigame. Your character is an alchemist you see, so it makes sense from a narrative point of view at least. CSI: Happy Ever After perhaps. Your first task at the outset of the game is to build your alchemical toolkit and subsequently gain the ability to transmute yourself into a bird. 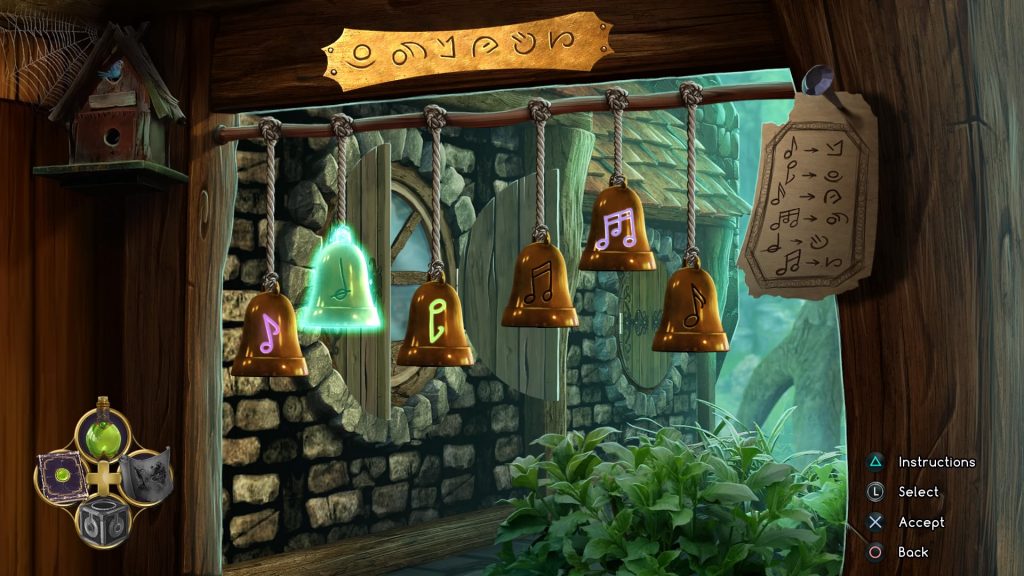 Hidden object puzzles are generally a well illustrated static image with a list of the of the objects you’re required to find at the bottom. One of these objects will generally be pivotal to moving the plot along, the others being pretty window dressing. For example you’ll need to find twelve sharp tools but only come away with one after completion of the puzzle.

Next there are minigames which vary from the likes of simple code translations; match the musical note to the symbol perhaps; to memory games and simple pattern matching. None of them are particularly complex and are unlikely to give anyone barring the youngest players any trouble. 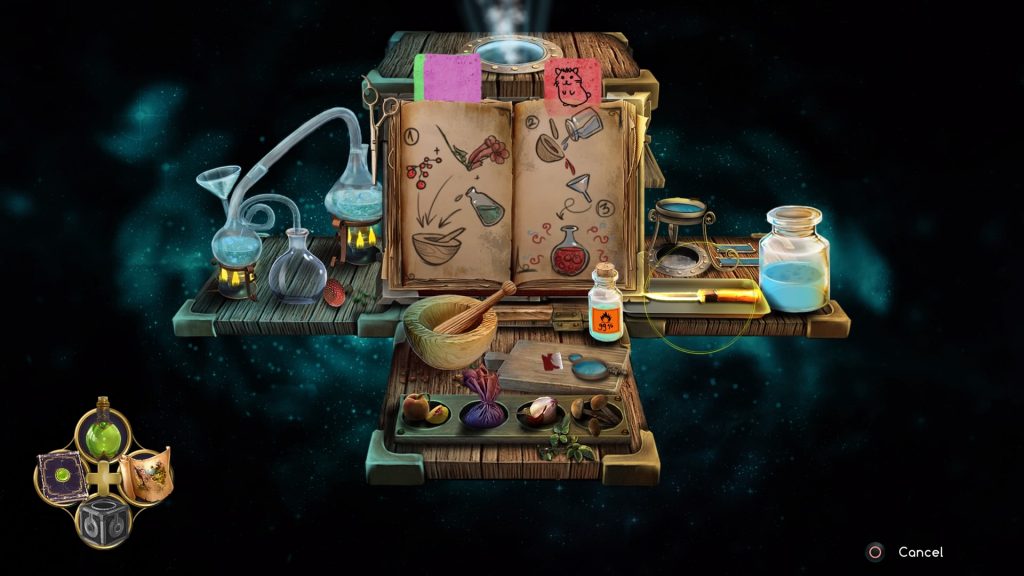 Finally  there’s the alchemical minigame. Your toolkit has various implements that you can use in conjunction with ingredients you’ll find scattered throughout the game world. Generally the puzzles get no more complex than cutting up or grinding ingredients in your mortar and pestle, adding a fluid of some kind and boiling it up into a potion you’ll generally end up imbibing shortly after.

One early puzzle jumped out as something of an anachronism. You’re required to examine two blood samples from different sources to see if you get a match. Only the guard you submit the results to refers to them as DNA samples. Given that DNA was only isolated in the nineteenth century and properly identified in the mid-twentieth, it feels a bit at odds in a middle-ages set fairytale environment.  It adds to the CSI feel anyway. 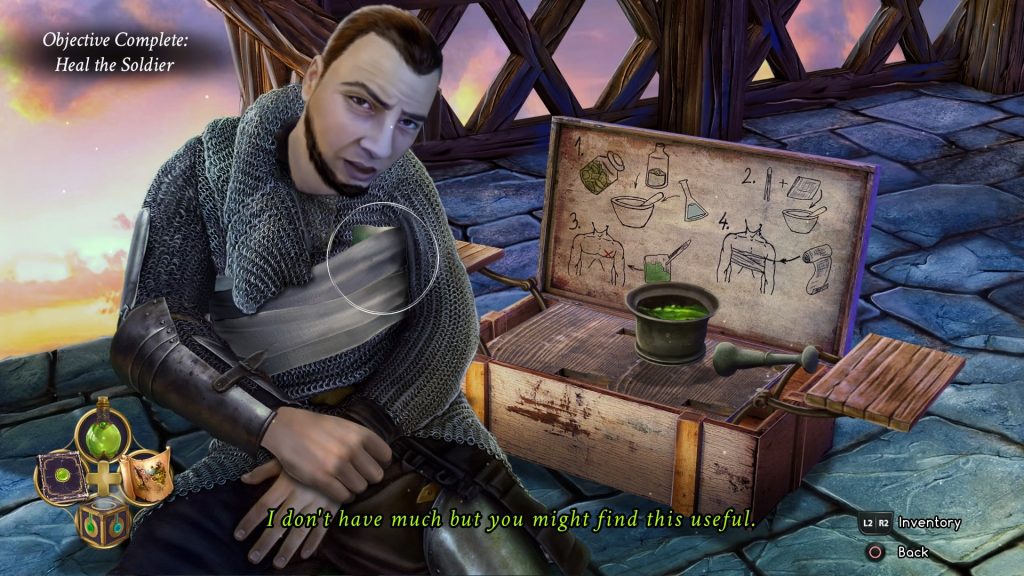 The voice acting and animation are functional at best, the characters making even the most wooden guard in Skyrim talking about taking an arrow to the knee seem Oscar-worthy by comparison. Though as we said before, you’re here for the puzzles and they’re well done.

There’s a hint system you can abuse to your heart’s content, but if you use it within the hidden puzzles you’ll deprive yourself of a trophy. Nothing to stop you using it in the overworld without penalty though as there’s no associated trophy there. 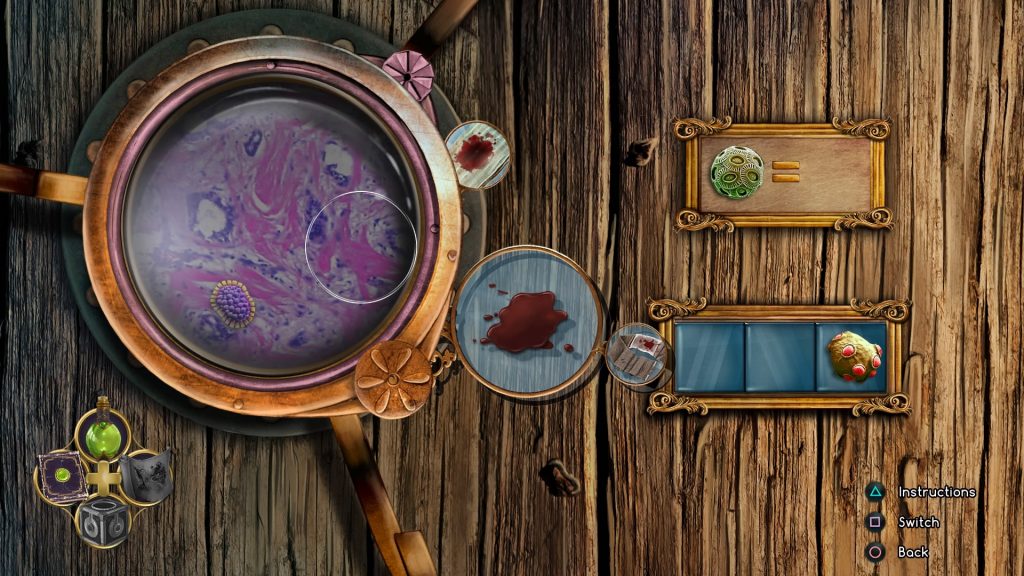 You can select normal or expert difficulty for your playthrough, we’d recommend normal to start with. If only to play through with a few extra hints. Expert has a longer cooldown on the hint powerup plus it includes a timeout mechanism in the hidden object puzzles that attempts to stop you spamming X everywhere on the screen in order to find objects.

Along with a hearty rumble on normal difficulty, this is enough to stop you take a more considered approach and actually study the illustrations and find the objects you need.

Once you’ve beaten the main storyline there’s an epilogue chapter for you to play through, it’s a nice palate cleanser to see out the game. 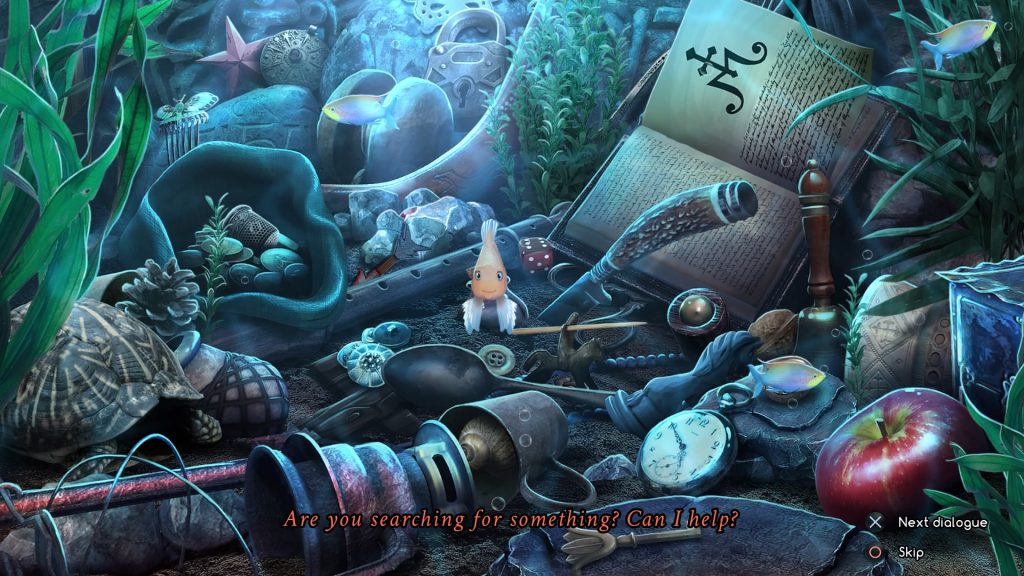 All through the story there are forty puzzle pieces and fifteen figures to find, thankfully your progress collecting each is carried over to your next playthrough so you don’t need to gather them all in a single perfect run.

In conclusion then, Queen’s Quest 2 is a well done puzzle game with ropy voice acting and wooden characters but good puzzle mechanics. Everything is secondary to that anyway. The plot is rudimentary and the villain of the piece was pretty obvious to us from early on.

Queen's Quest 2
8 Overall
Pros
+ Intricately designed puzzles
+ Beautifully illustrated for the most part
+ Anti-spam mechanism works well
+ Collectibles carry over to next playthrough
Cons
- Some puzzles are overly simplistic
- Voice acting and characters are wooden at best, plot is an afterthought
- DNA sequencing in the middle ages is a baffling anachronism
- No real penalty for abusing hint system outside puzzles
Summary
Another polished Artifex Mundi hidden puzzle game with a fairytale twist and added alchemy. A worthwhile way to spend a few hours.