Over the Moon brought us part one of The Fall in 2015 and, after a long, long wait, the second instalment has finally arrived. I’ve been anticipating this after part one delivered a tight, darkly comic exploration of Asimov’s three laws. The Fall Part 2: Unbound certainly looks to build upon it but with a lot more character work and a larger cast. 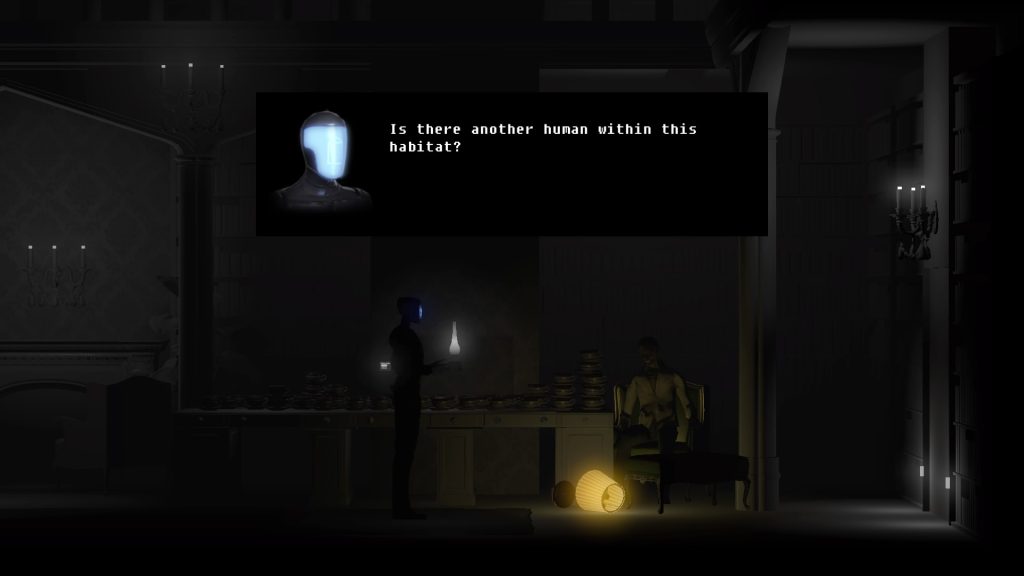 Arid’s story continues where we left it. She’s been discovered to be faulty after her suit was deemed to have no human occupant. As malfunctioning artificial intelligence, she’s been earmarked for the scrapheap. In an act of self preservation, she creates a law to save herself and adheres to it, for better and worse. It moves in some interesting directions with Arid looking to utilise others to protect herself whilst trying to reconnect with her operator Jacobs.

The tone remains murky and Arid’s business-like delivery is dry, forceful and sometimes leads to some darkly humorous situations. There’s a much bigger cast to play with who come with their own arcs and personalities. Each of them are likeable in their own way and they come together to provide an ensemble that works well together. There’s some good acting on display and the writing is witty, if occasionally beyond my understanding. 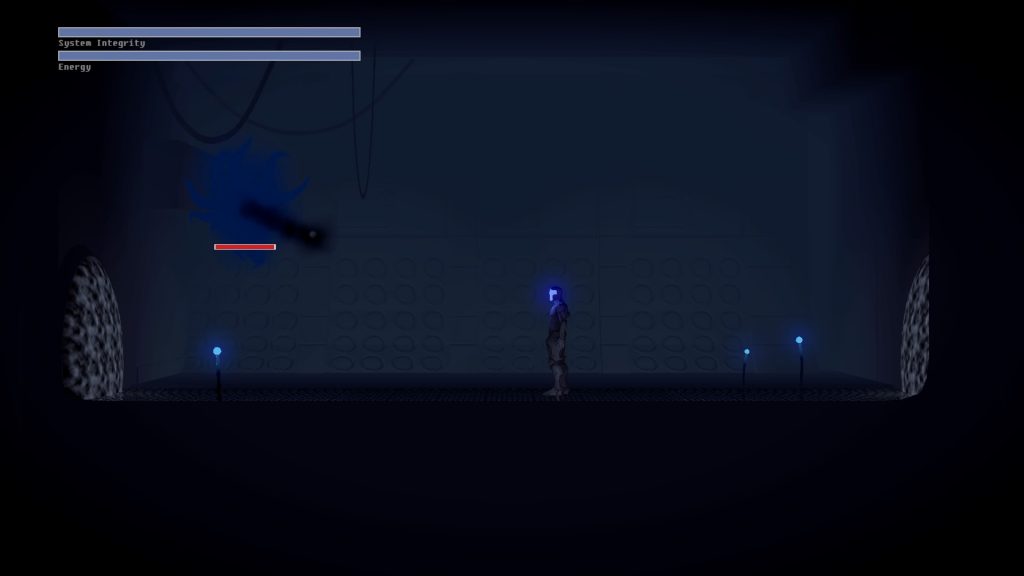 The Fall Part 2: Unbound almost flirts with an open world. Your main puzzle areas are connected to something of a hub area with pylons becoming available for fast travel. This could have led to a potentially more expansive experience but exploration seems a falsehood. There’s a clear linear path from one story beat to the next with only a couple of trinkets off the beaten path. You gain upgrades to your weapon but they merely act as a way to open doors and traverse firewalls. It toys with the idea of revisiting areas but the open areas just don’t feel justified.

Combat arrives in two forms. Arid has some fairly tame gunplay which, in reality, doesn’t work well. You tend to face enemies in locked-off arenas with some light platform elements that usually come into play. Your jumping and shots are governed by an energy pool that does recharge. Being careless with your shots can leave you short but enemies are usually designed to have windows where they can be attacked. You have a lock-on which is vital when dealing with hordes of viruses.

You can take a few hits but, when the game ramps up the enemy configurations and attack patterns, it can be tough to manage energy. Checkpoints are handy for a quick retry after failure but I did find myself impeded by a few encounters. You can adjust difficulty on the fly but success can sometimes be found by just keeping an eye on who spawns where and when. I don’t find it satisfying and question whether it really needed to be there. 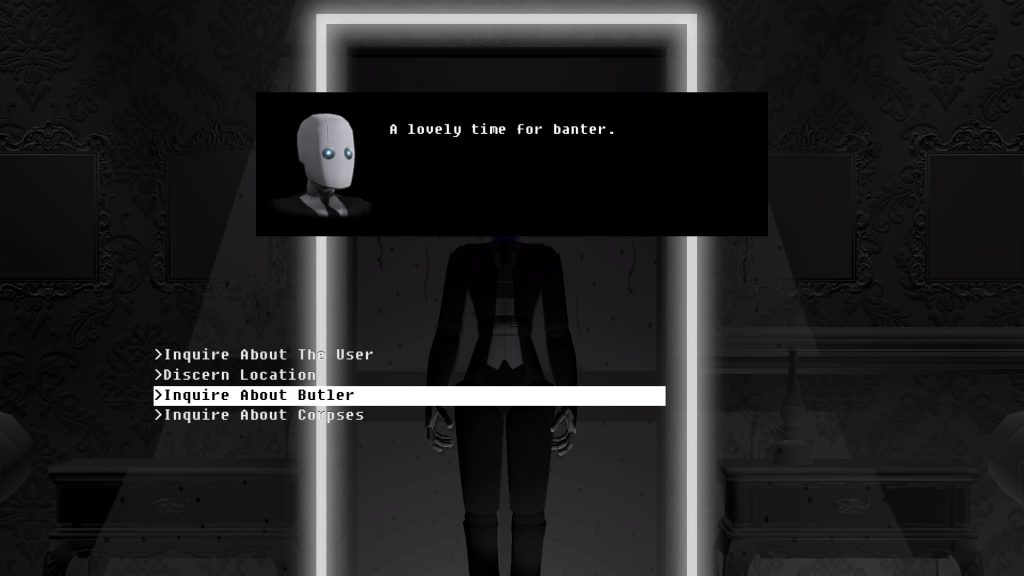 The One’s combat makes more sense. It plays out like a rhythm game as you time button presses to counter enemies on your left or right flank. There’s more feedback on offer and it’s something you can comfortably deal with. Introducing more enemy types does help keep it fresh and there’s a more enjoyable visual component as you dispatch foes with your martial arts. You’re graded on your success which, however minor, does give you something to master.

As an adventure game, The Fall Part Two: Unbound sticks closely to its predecessor. You can highlight the environment for flavour text and interactive objects and are ultimately trying to connect the dots to complete a solitary objective. Your inventory is never cluttered and you’re usually handling just a single item to tinker with. There’s effort made to give the environment character and quips build upon Arid’s single-minded ambition.

There’s charm to it and the puzzles on offer do tend to follow a sensible logic. It gets a little trickier when you’re dealing with applying concepts to a spot on the map, rather than a physical object. This happens in the home stretch and, if you’re not in that line of thinking, you might find yourself stumped. The new characters allow you to switch perspectives and this interchanging between narratives comes into view in the closing acts. What this game does lose in pacing and momentum, it gains in variety. 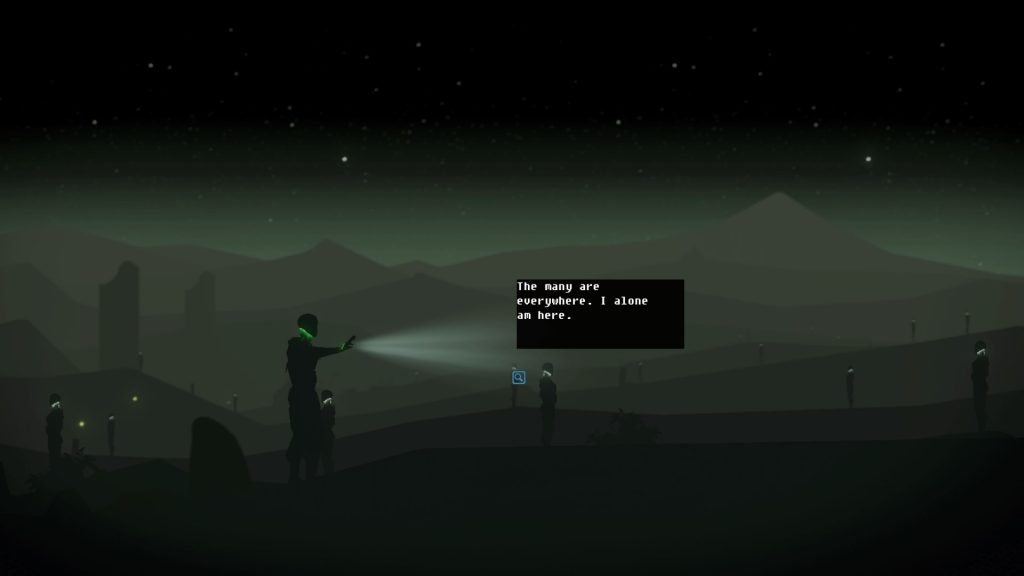 There’s a grim atmosphere to The Fall Part 2: Unbound which is held together nicely with some desolate, abandoned set design and some rather bleak themes. It doesn’t look to improve much on the blueprint but there’s some nice flourishes that play out when switching perspectives. It’s a believably bleak sci-fi world in which robots are there in servitude and the humans involved have their own set of problems. There’s not a lot of light on offer and music is used very sparingly to give a sense of desolation.

As a continuation of the story, this manages to succeed well. Themes are expanded and subverted in more depth and it concludes on something surprisingly hopeful. It lacks the stinging, succinct pacing of the opener but the linearity is retained and puzzles remain uncomplicated to keep pushing you along. I’m eager to see how this trilogy ends, even if it might take a while to come to fruition.

The Fall Part 2: Unbound
7 Overall
Pros
+ A well-written story.
+ Strong, atmospheric visuals.
+ A complimentary cast of characters.
+ Puzzles are logical and offer moments of dark humour.
Cons
- Arid's combat feels a little cumbersome and needless.
- Lacks the sharp pace of the first episode.
- The hub world struggles to justify being there.
Summary
The Fall Part 2: Unbound manages to retain the atmosphere, dark humour and themes of the original whilst bolstering the narrative with an ensemble cast and their own journeys. It works, even if the pacing does lag compared to the short and sharper first part. I feel Arid's combat doesn't strike me as necessary whilst the hub connecting the levels feels too empty and linear to justify being there. That said, there's an anticipation here to see how this story wraps up.