The rather clumsily named QUByte Classics – The Immortal by PIKO has released on PS4. It’s a port of two versions of the same game, The Immortal. In the package they are labelled as 8-bit and 16-bit but more specifically they’re ports of the NES and Mega Drive/Genesis versions. You may not of heard of it before, if you have you probably know they’re pretty unforgiving games and that’s still mostly the case. 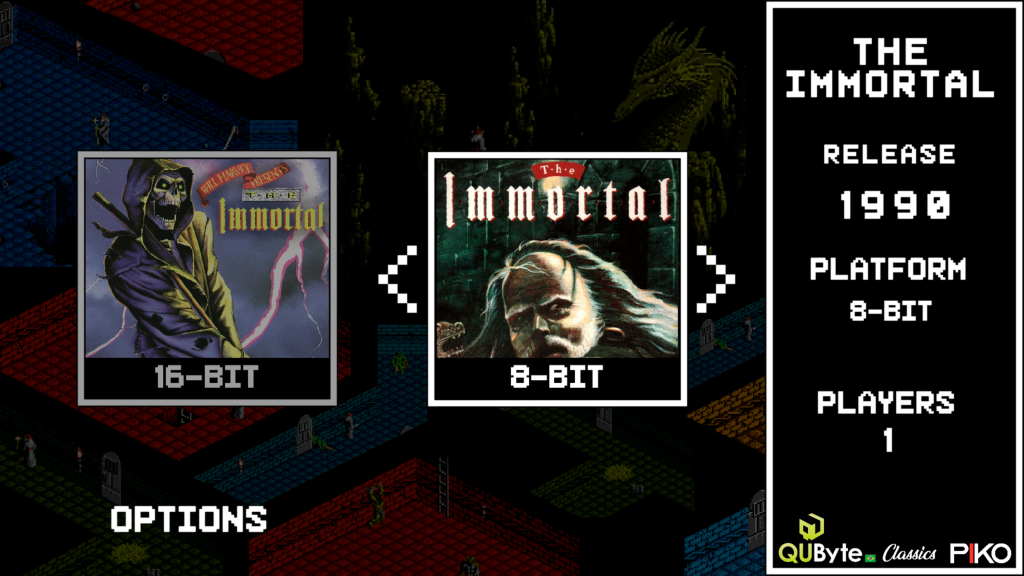 You play as a wizard who has travelled to a dungeon to rescue your mentor. Upon entering the dungeon an apparition of your mentor appears to speak to you, but it refers to you by someone else’s name. Unperturbed you set out on your adventure filled with murderous enemies and death traps to complete your rescue.

The two versions are relatively similar but not exactly the same. Both are viewed from an isometric perspective and have you wandering around environments whilst avoiding traps, fighting off enemies and picking up items in order to solve puzzles. The game is split into levels and each is relatively short but getting to the end will take time and is very difficult. 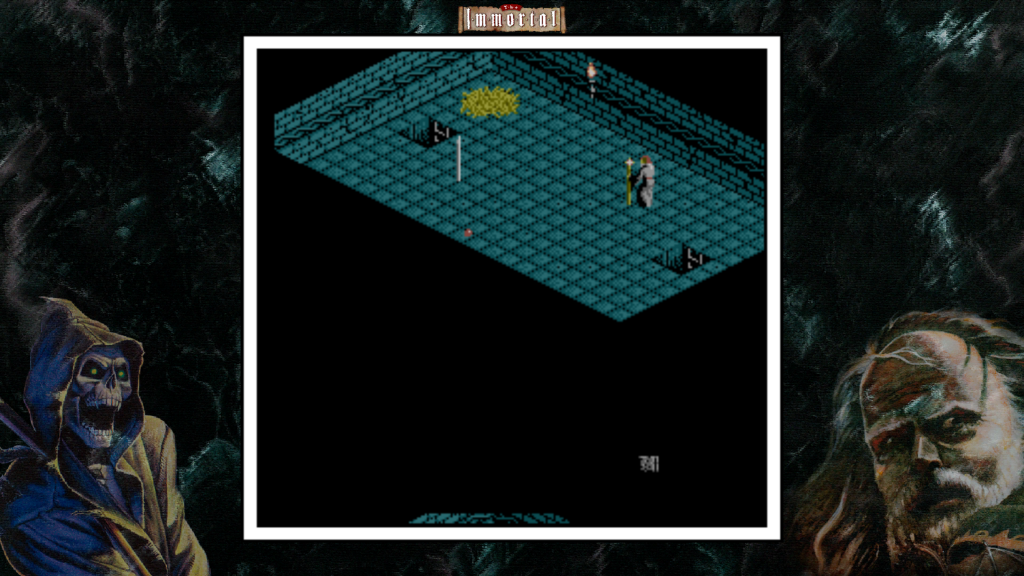 Upon starting the game I fired up the 8-bit version, figuring it’d be better to go up to 16-bit rather than starting with the more advanced version and then working backwards. It’s a tough introduction to be sure. In the first room there are two mounds of earth. The game rather generously warns you that you might want to move when you step on them as if you don’t a giant worm comes out of the ground and eats you. That’s one of your three lives gone.

Move into the next room and fire balls are flying out of the walls and flame jets out of the floor. The fire balls, thankfully, aren’t one hit kill they’ll just do damage to you. The flame jets will kill you in one. There is a corpse nearby. Approach it and you can search it and get some items. There is a locked chest amongst the flames and off screen a goblin is fighting someone. You can fight the goblin, to save the man, to get the key that will open the chest and grant you some items. 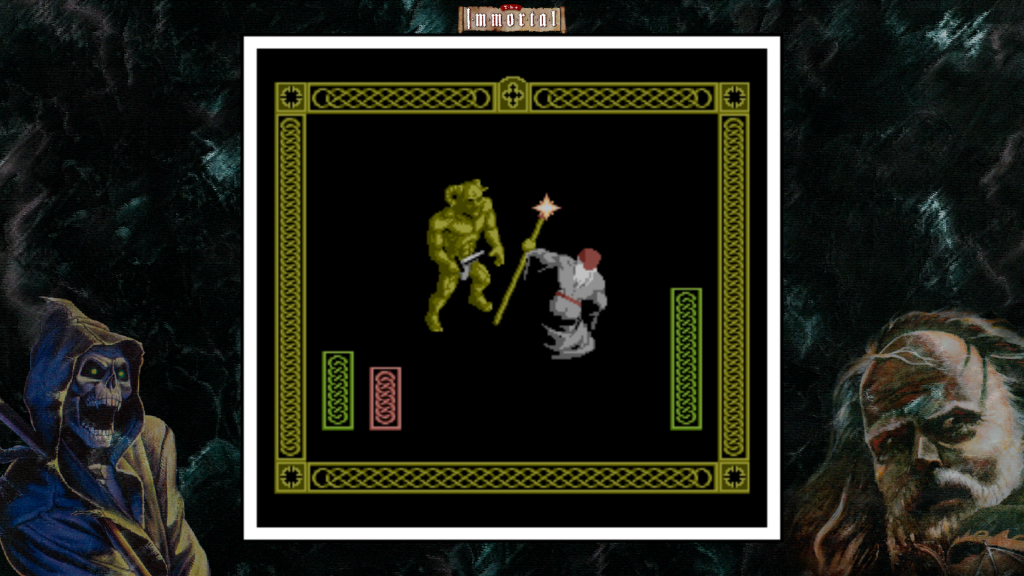 Fighting takes you to a different screen where you’re zoomed in on your character and the enemy. You can dodge left or right and you can swing your sword left or right and stab. You might be able to get through the odd fight just by swinging blindly but your health won’t recover and you’ll likely have to fight someone else at some point.

Basically what you want to do is dodge each swing in the right direction as each time the enemy attacks they get more tired and the same goes for you. The more tired they are the slower their swings which opens up opportunities for you to attack otherwise whether you get in first or get hit is pot luck. It sounds like an involved system but Punch Out! it isn’t, however you do eventually get the hang of it. 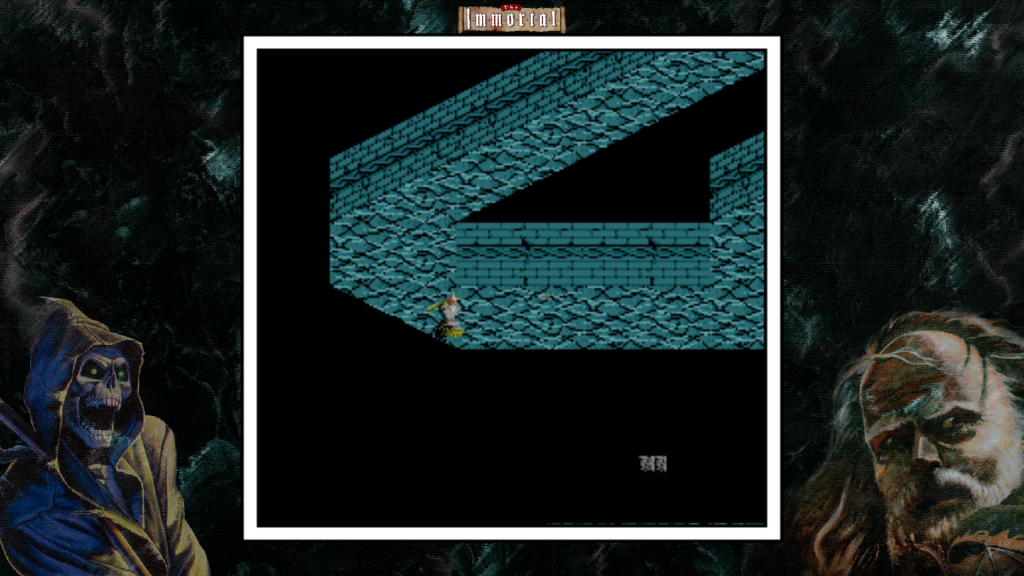 The game continues like that, with random holes in the floor that you can pull yourself out of if you know what buttons to press, spikes in the floor and more giant worms. Use an item at the wrong time and you’ll instantly die too. The thing is I don’t mind that. Yes you only have three lives but if you lose them all then you can continue at the level you were just on either straight away or with a password. My issue is with other parts of the game such as bats that just appear and zip around you. You can shoot them with fire balls but they just tend to appear and are tough to target so you can lose a lot of life to them which just seems mean spirited. There are also a couple of points in the game where the controls don’t work in your favour so dying isn’t really your fault.

Luckily you’re given the gift of save states in this collection. You get five slots per game to play with so if there is a part you’re particularly struggling with you can give yourself a leg up, thank the lord. If it wasn’t for these more random elements then you wouldn’t really need them as most other areas just rely on your knowing what to do but having to go through the whole level again to fail at a section through no real fault of your own is a pain. 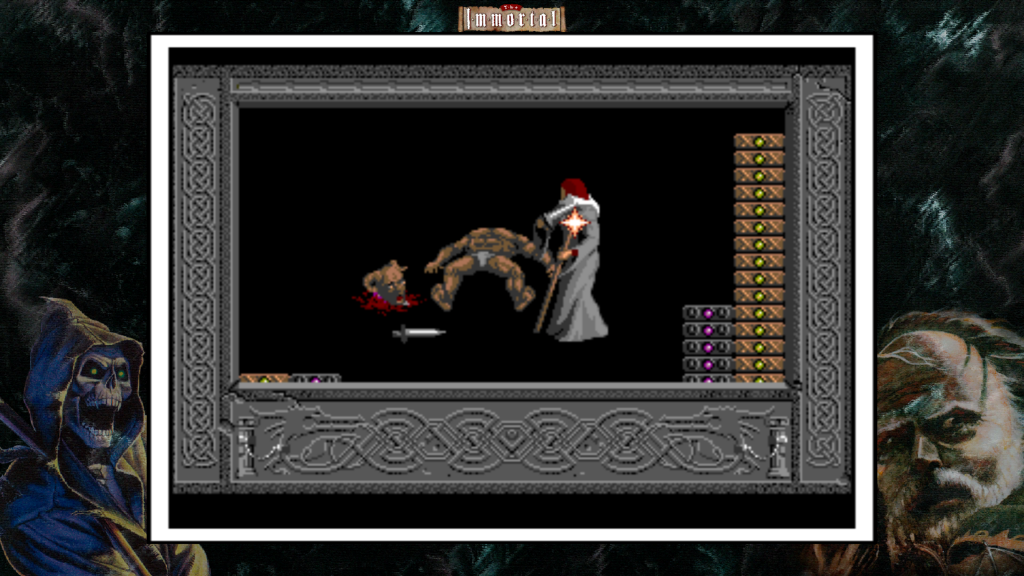 The 16-bit version thankfully gets rid of the bats and you can’t just shoot fireballs willy nilly now either as it’s not necessary. It also has less traps, possibly because the viewpoint is zoomed much further in so your spatial awareness is lessened. It mostly follows the same layout as the 8-bit version however, including the parts where the controls don’t work with you, but there is one extra level slotted in near the end.

The graphics on both versions are decent for their time. The 8-bit version’s environments aren’t anything special but the animation is strong, especially the unique deaths you can get. When you go into a fight the sprites are much bigger and detailed though the animation is less impressive. The 16-bit version naturally ups the detail and the animations are even better and more varied, but at times the frame rate can become quite chuggy, which I assume is being emulated correctly. 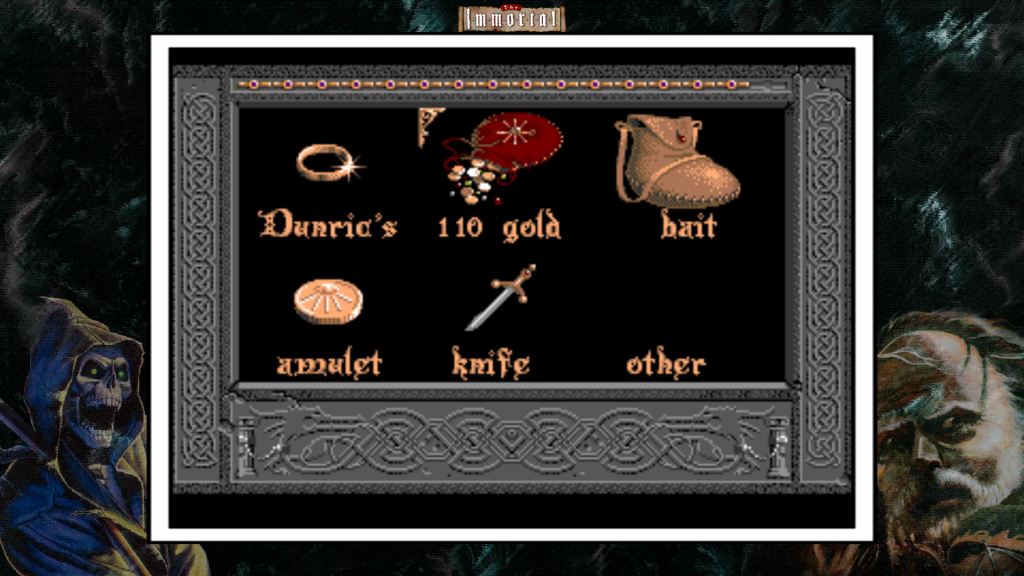 There are some filter options like CRT effects or screen stretching but I didn’t particularly like any of them so stuck with the default. I also left the controls the same though as the games are only being emulated the game will refer to the ‘A Button’ rather than the correct PlayStation button. Not a game breaker but an indication of the amount of work that has gone into the ports. There’s no ‘How to Play’ or instruction manual scans for instance, which would have been helpful for newcomers.

QUByte Classics – The Immortal by PIKO is a pretty bare bones package but the games do have some merit. I’d never played them before and there was a frustrating difficulty curve but they have some cool set pieces and the fact that it’s difficult makes them that much more impactful. It’s pretty linear and the two versions aren’t so different to make playing both a necessity but they’re relatively short if you don’t get stuck and it’s also pretty cheap, though could be cheaper. The inclusion of save states does make things a little more palatable to modern audiences but that’s basically all the extras you get which is a missed opportunity. 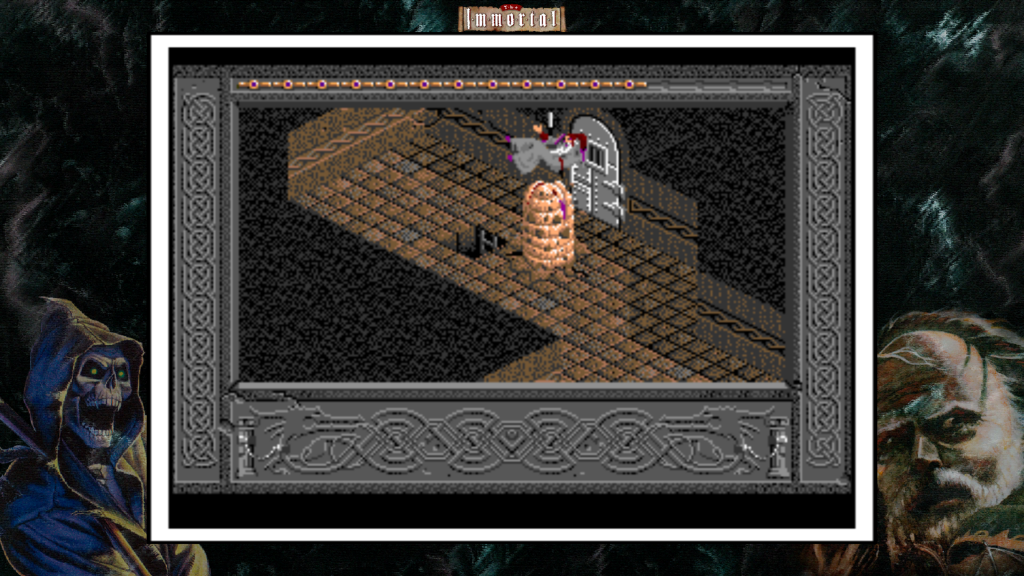 Fans of the originals will enjoy getting trophies for playing through them again and new players can enjoy an intriguing title with some interesting ideas and a philosophy that is quite different to modern games.

QUByte Classics - The Immortal by PIKO
6 Overall
Pros
+ Some cool set pieces still
+ Save states
+ Unique death animations are cool
Cons
- Basic package
- Some irritating parts
- Two games are very similar
Summary
QUByte Classics - The Immortal by PIKO is a basic package for two versions of the same game. It does have merit to this day however, with some great set pieces but the adventure is linear and the difficulty can be perverse. Thank goodness for save states.