Milli & Greg is the latest effort from Brazilian developers 2ndBoss and is best described as a 16-bit styled 2D retro platformer.  Yes, we’ve had a lot of those recently, especially in the indie space, but can this one stand above the others or is it just another retro throwback?

In this game you play as Milli, a girl whose cat, Greg, has disappeared into the woods and now she has to go and retrieve him.  Beyond that there’s no real plot to worry about and given that you’ll catch Greg at the end of each level, it wouldn’t make any sense anyway. 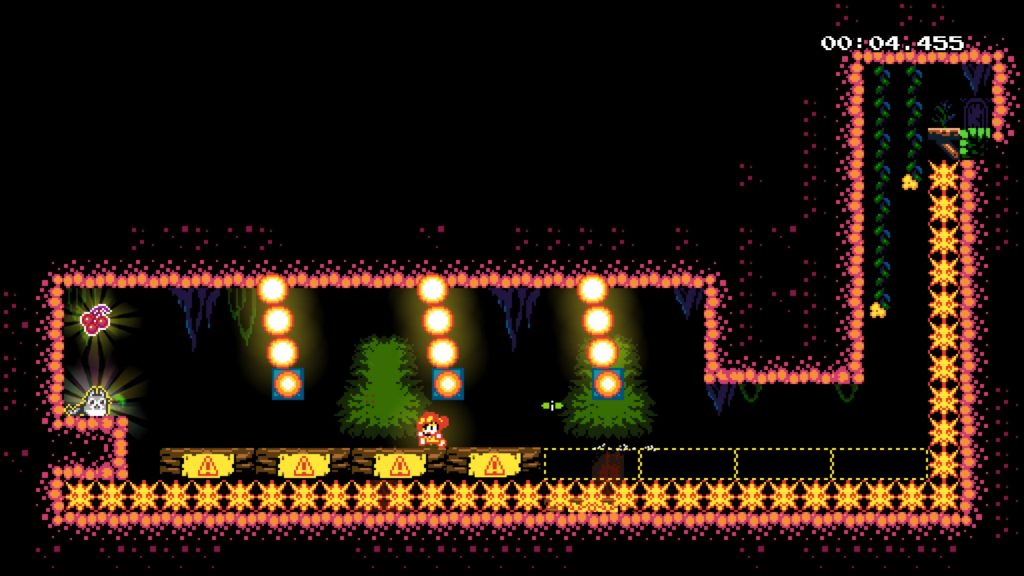 The game plays out over 100 levels (plus 50 bonus stages), set across four environment types, and each one of those is a single screen affair.  You start in one corner and your cat is in another.  Between you and him are traps, spikes, fireballs and collapsing platforms.  You’ve played a platformer before.  You know how this works.

It’s standard stuff but what sets the gameplay apart from the absolute glut of other 2D, 16-bit looking indie platformers is a heavy dose of inertia.  Yep, once Milli starts moving, it takes quite a few frames of animation for her to stop.  This means that controlling her feels like she’s got a nice pair of buttered shoes and it really does affect the gameplay.  So much so that without that particular gameplay mechanic, this might have been one of the easiest platformers on PSN.  But with it there, the game becomes very difficult. 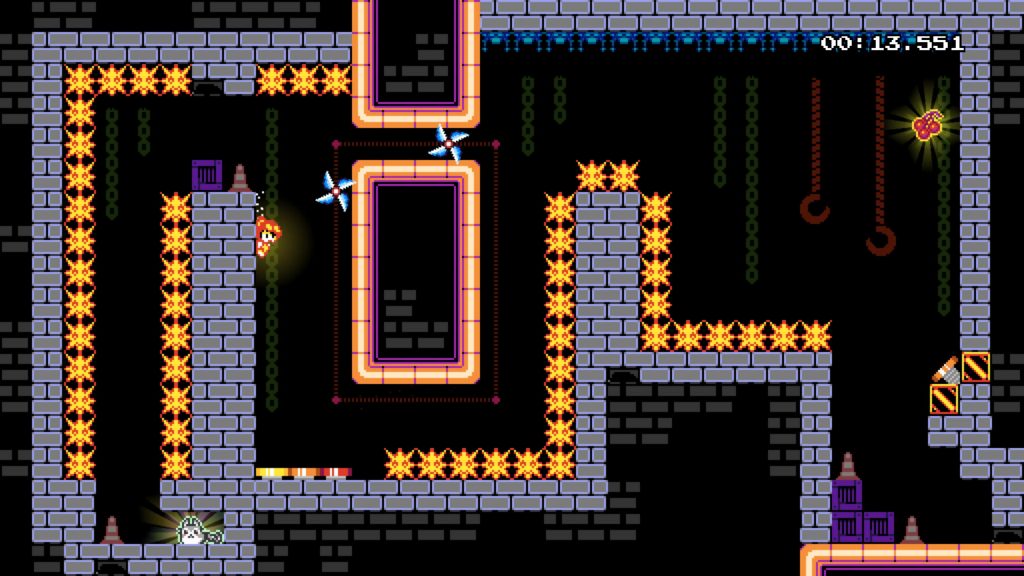 A degree of precision is required for the trickier levels of the game and Milli & Greg has a mixture of very difficult bits and difficult bits that are chained together.  By that I mean that you might have to do two or three tricky things to get through a level.  This is can be a problem when you’re constantly wrestling the controls.  But that said, these aren’t bad controls, the game is playable, it’s just a design choice.

That’s all fine but after a while the game really does start to turn the screw and there were plenty of times where we thought that we were done, that we’d reached the limits of our skills.  However, with a lot of repetition and patience, you will get through it and while the next level might not be as difficult, you’ll soon come up against another wall.

Just getting through the levels is tough but Milli & Greg also has collectibles in it.  Fruit and picture frames can be found, usually in the hardest to reach places and so if you want to max this game out, you’ll need to grab all of those too.  That’s a commitment we can’t relate to though. 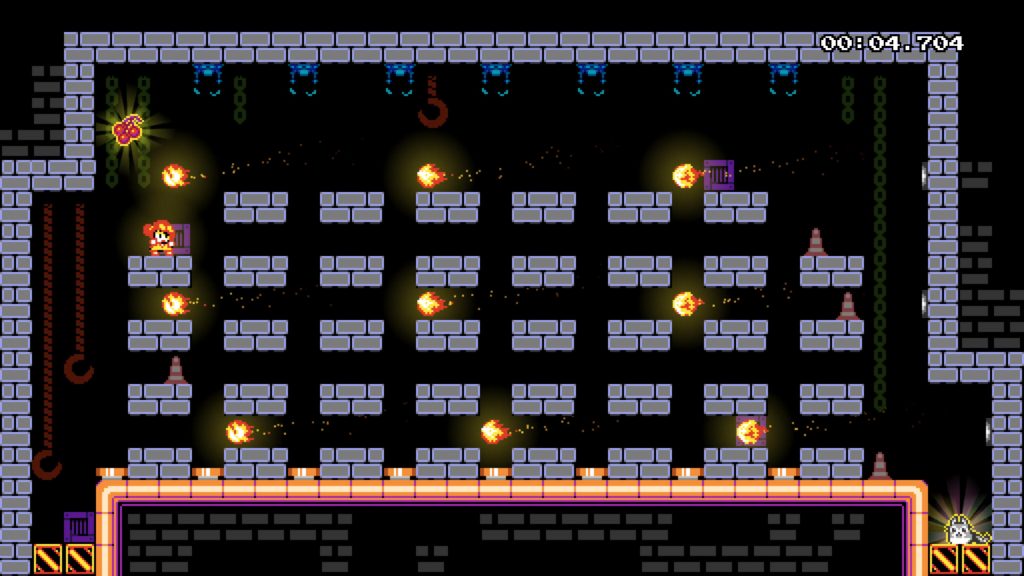 There isn’t much else to say about the gameplay.  Your controls are pretty straightforward save for a dash move that can be used to travel up or across in order to traverse tricky gaps but that’s about it.  This isn’t one of those games that drip feeds you new mechanics and we quite like that.  Instead of feeling like an extended tutorial, Milli & Greg sets out its challenge and asks you to work through it with the skills it introduces right away.   There will be plenty of times where you’ll be like ‘sod this f’ing cat’ though.

While the game sports that now-common 2D, 16-bit look it does look okay.  Many games in this genre think it’s enough to just look like a NES or SNES throwback but Milli & Greg looks a tiny bit slicker than that and the music is actually pretty impressive with some big sounding retro-styled tunes to enjoy.  It’s still just another retro aesthetic but there’s a smoothness to the game that makes it feel polished.  Maybe more polished than it actually is. 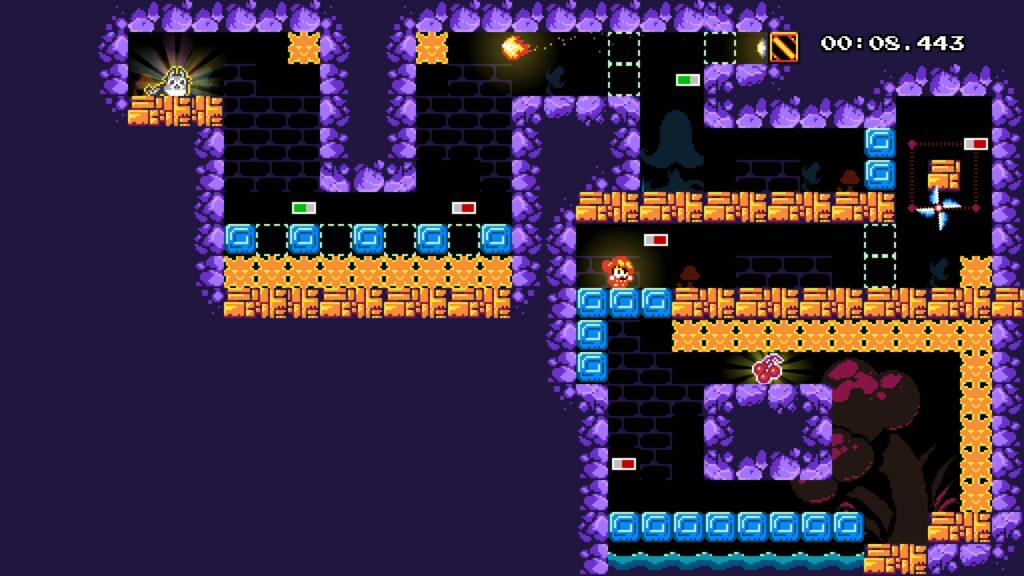 Beyond that, there’s not a whole lot else to say about the game.  As one of the most prolific indie game review sites out there, we see games similar to this pretty much once a week and usually they’re all born on Steam as private projects of one or two man dev teams, so it’s hard to get excited about yet another one but there’s enough of a challenge here for this game to be compelling enough to be considered interesting.

Of course, the flip side is that you might just find it unenjoyable and frustrating.  It might not be up there with Super Meat Boy in terms of difficulty but with PSN saturated now with easy to Platinum Meat Boy clones, at least you know that you won’t beat Milli & Greg in a single session.  Indeed this one will keep you going for weeks if you’re prepared to face the challenges it sets.  There’s nothing remarkable here, nothing you haven’t seen before but this is a bit better than the PC shovelware that shows up on PSN and sometimes that’s just enough for a half-hearted recommendation.

Milli & Greg
5 Overall
Pros
+ Reasonable polish for an indie platformer
+ A tough challenge
Cons
- Inertia is a bit too heavy
- Some levels will make you want to quit gaming
- Seen it all before
Summary
Milli & Greg is a no-frills 2D platformer with a retro aesthetic and a whole lot of difficulty, made especially tricky because it throws a lot of inertia into the mix. We've seen it all before but we've seen it done a lot worse.