The venerable old Puzzle Bobble series came back in 2021 thanks to a PSVR-enabled outing and this game here is the non-PSVR PS5 port of the same game.  But without its virtual reality gimmick have State-side software specialists Survios, got enough here for the game to standalone?  Let’s find out.

For the uninitiated, Puzzle Bobble was a 1994 match-three puzzle game that saw you trying to clear pre-arranged patterns of coloured bubbles by shooting more bubbles at them.  To do this you aimed a pointer at them and hopefully land your bubble onto the rest in such a way that you create a link of three or more of them.  Do that and all the linked bubbles go away.   Ultimately, your aim was to clear the screen of bubbles.  Simple enough. 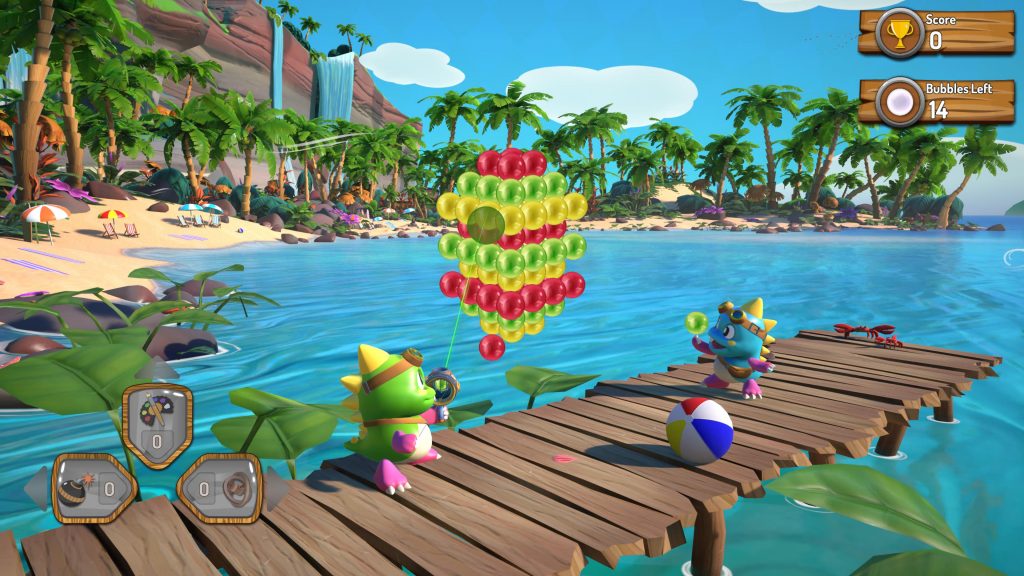 But that was in 2D, where as Puzzle Bobble 3D: Vacation Odyssey adds, as you’d surmise from the title, an extra dimension.   Now the bubbles are grouped in 3D clumps with depth now added to the other two dimensions.  However, the main concept is still the same.  You still fire bubbles into the area aiming to clear all the existing bubbles away.  These are attached to a core that then has to be destroyed.

To fire a bubble now you have to squeeze R2, aim with the left stick and then release R2.  Aside from hopefully clearing out some bubbles, the impact of your shot will also spin the bubble group on a central axis, changing up your view of it.   But, rather than having balls drop ominously towards you like in the original, now your failure conditions are either a time limit or a shot limit.  Run out of shots and you’ll need to restart the level. 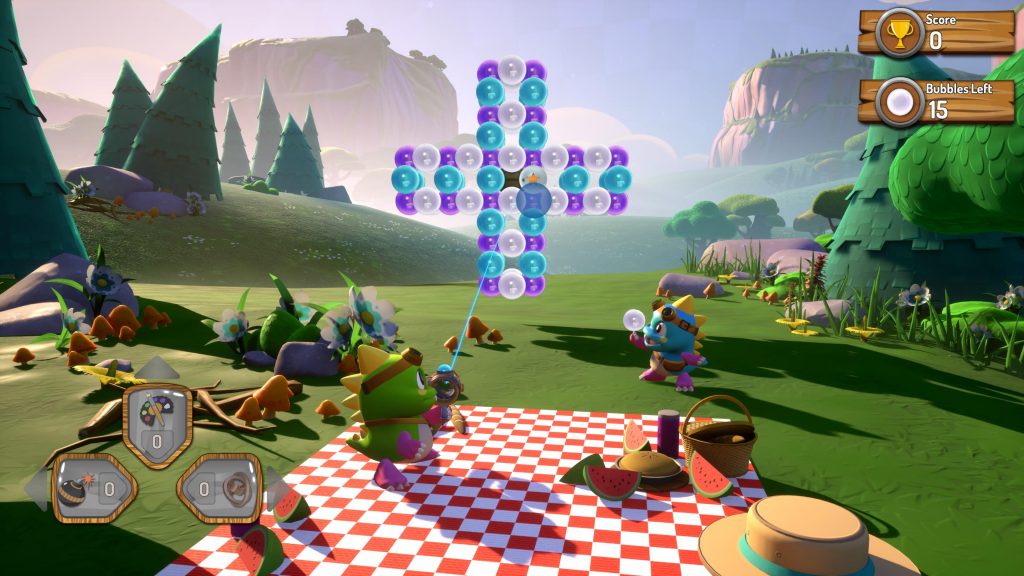 Aside from power-ups that are unlocked as you go along, with the bomb being the most useful.  Annoyingly though, if you use a power-up and still fail the level, you’ll be restarting without it.  And at 20 coins per use (100 to unlock them) that can take two or three successful level completions.

Beyond that, the simplicity of the original game is still there.  New viewpoint aside, this is still a simple match-three puzzler at heart.  There are problems though.  The first really depends on if you’re a fan of the series.  Unlike other puzzlers where combos are super satisfying to make, in this series usually it’s just about seeing the bigger grouping of one colour and getting rid of it.  In 3D this is even worse as it’s often a lot harder to shoot at, or even see, key bubbles that could detach larger clumps of bubbles.  Also, with 100 levels to play through, it does start to get old pretty quickly. 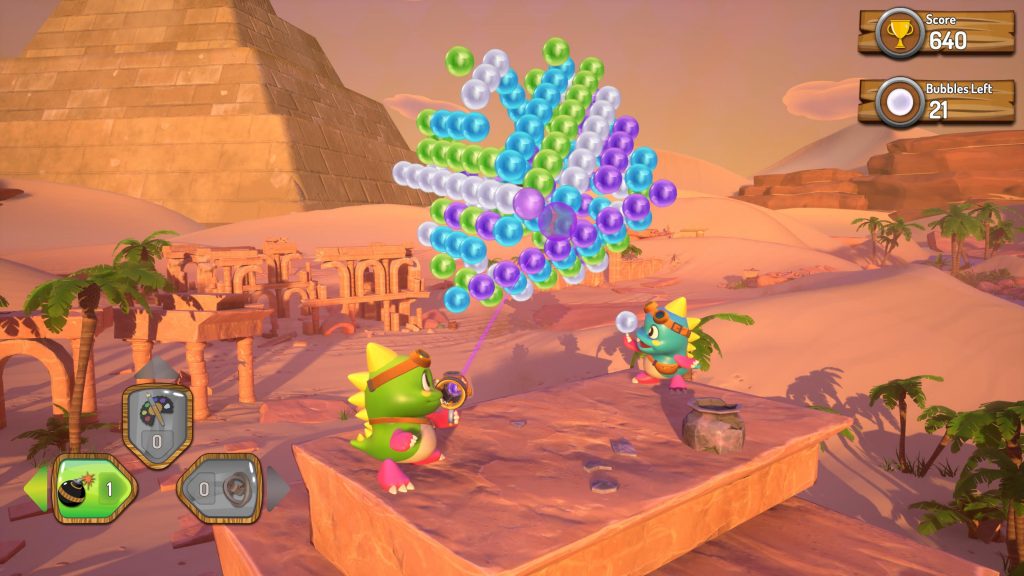 However, the worst aspect of Puzzle Bobble 3D is down to the aiming.  Well, sort of.  Aiming is actually reasonably straight forward.  The problem is that it’s slow and cumbersome and also a little unreliable.  Even on the early levels, you’ll find yourself missing because the aiming line suddenly moves by a pixel and means that you’ve now added a bubble to the clump instead of clearing anything.  This gets worse later on when the clumps begin moving.  At that point it starts to get a little joyless.

On the plus side, the move to 3D does work quite well visually.  The whole game has a lovely clean look and the graphics are sharp, bright and colourful.  Add to that some cheery music and plenty of blue skies and Puzzle Bobble 3D is reasonably charming to play.  And the game has offline versus play as well as an endless mode for people who want more of an arcade-y experience.

But, for us, we could tell that this whole thing was meant to be enjoyed in PSVR.  The shift to 3D doesn’t really aid the gameplay and indeed takes away some of the precision that you need to really aim your shots.  But having played plenty of versions of Puzzle Bobble in the past, it’s pretty cool that they tried something different and fans of the series do get a big chunk of game for their £15.99.

Puzzle Bobble 3D
6 Overall
Pros
+ Nice visuals
+ Interesting new take on a classic gameplay formula
+ Lots of levels to get through
Cons
- Controls are super reliable
- Does get old pretty quickly
- Probably best in PSVR
Summary
It's Puzzle Bobble in 3D and on your PS5. Fundamentally it does all work but the twitchy controls do spoil the fun a little. PSVR gamers will probably get more out of it but the sharp PS5 visuals are probably the high point of this version of the game.