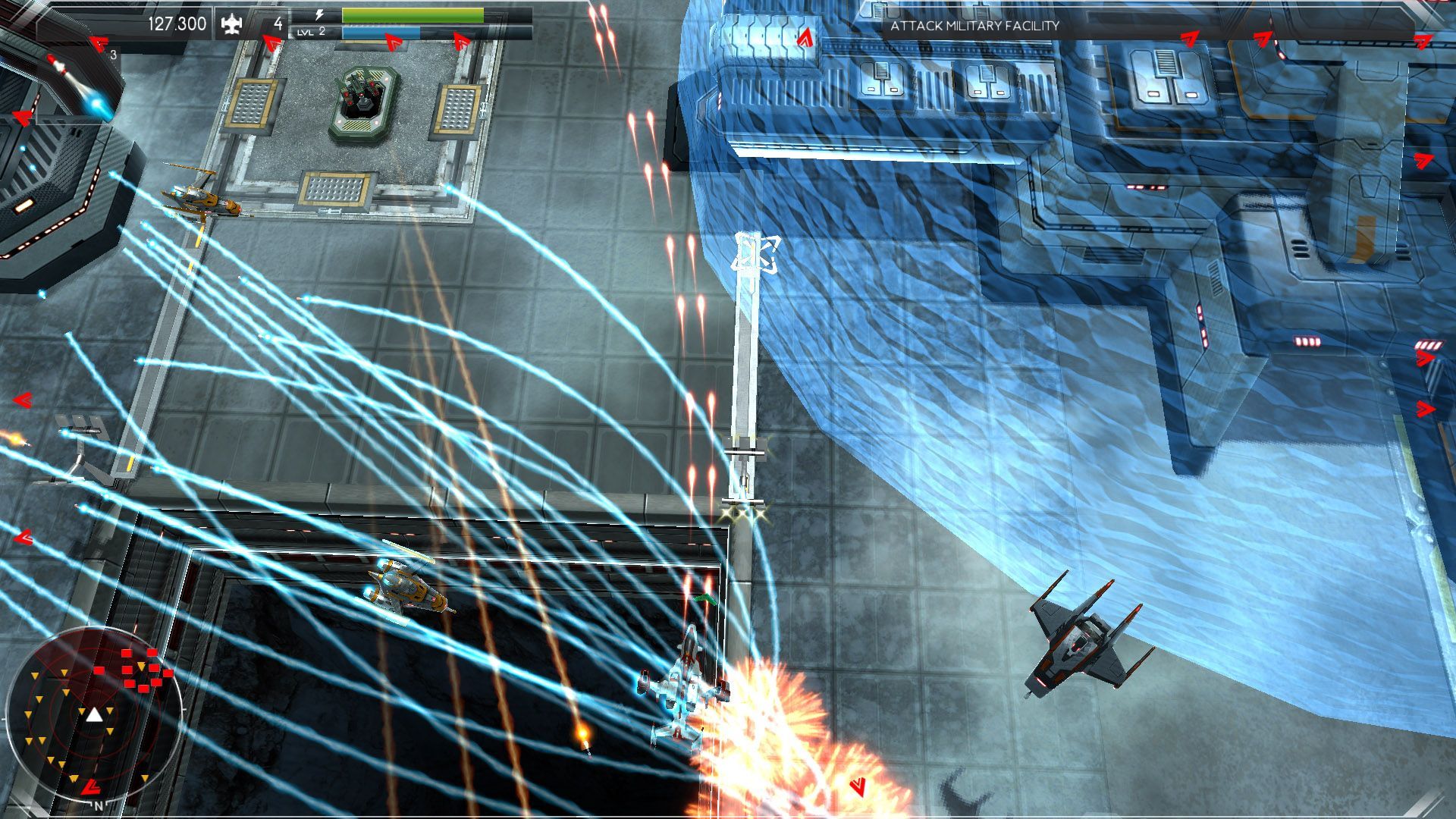 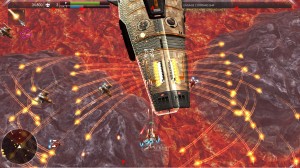 Despite my lack of expertise in the genre, I’m a real fan of shoot ’em ups, especially funky little indie ones and so I’m always excited when a new one hits PSN and Project Root arrived recently promising some exciting free-roaming, top-down shooty action. Of course, there’s not much of a story to be concerned with. Just some fluff about taking down a massive corporation that has been wrecking communities. Quite why they have an army, or why you are prepared to murder hundreds to get back at them, I don’t know. That unfortunately is the first in a laundry list of things that are badly thought out with this game though and probably the least offensive.

So, once you get past the very minimal menu options, you are presented with five levels (six if you include the basic tutorial stage). You control an F-72 Zonda aircraft (I don’t know what that really means except that it kind of reminds me of the VTOLs from Saints Row 4) which has a basic machine gun attack, a weak bombing function and can occasionally equip and use special weapons (EMPs, homing missiles and rockets).

You manouevre with the left stick and rotate with the right. As the camera is trained mostly on your ship, this essentially rotates the game world. You fire and bomb using the triggers, with special attacks controlled off of a quick press of one of the shoulder buttons. It’s easy enough to figure out quickly but this isn’t a great set up. The problem is that your ship really isn’t very agile, certainly no more agile than your enemies. Also, they’ll constantly strafe to avoid you so every encounter tends to devolve into you spinning around trying to land shots semi-randomly on whatever else is on the screen. A small cursor ahead of you indicates where your bombing attacks will land but ultimately these feel much weaker than your machine gun. Not sure why. You’d think bombs are more deadly than bullets but what do I know. Either way, neither weapon is particularly satisfying. It legitimately feels like you’re armed with a pea shooter and water bombs at times.

Things marginally improve when an enemy randomly drops a power-up. These give you access to better weapons (three rounds initially) and the use of these can make the difference in certain encounters but again there is no real oomph to it. Also, when you die you lose whatever you were carrying which seems like a mean-spirited thing to do given that you’ve just died. Also, the EMP, which only takes out enemy bullets and rockets) is barely useful. 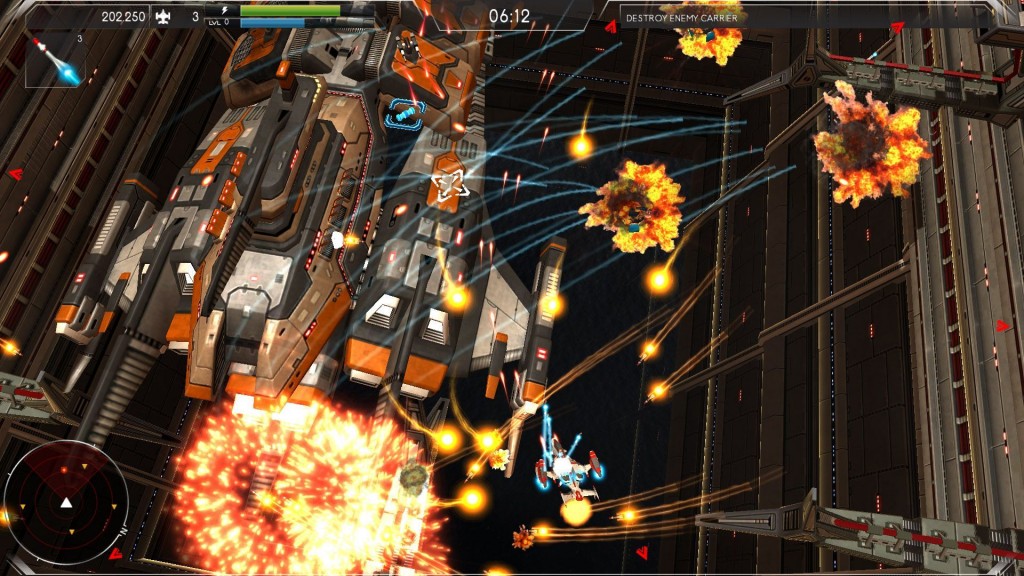 Everyone has played R-Type and the reason why it is so popular isn’t just down to the graphics but also the way that you powered up. After a couple of pick ups, you felt like a legit badass but Project Root is a game where you feel weak. The enemies do also but there are a hell of a lot more of them than you and given that nobody is moving particularly gracefully up there, eventually they are going to get you and there isn’t much you and your piss weak weaponary can do about it.

Well, there is one thing. You could upgrade. Slowly. I mean really slowly. It takes a while to earn enough XP to upgrade and when you do, you’ll question if the upgrade even did anything. This painfully slow process lacks the instant gratification of, well, just about every good shoot ’em up ever made and instead puts Project Root in the same category as the risible Aces of the Luftwaffe. And that’s swearing. 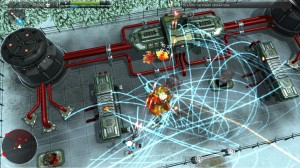 The only thing that Project Root needs then is to not overstay its welcome but with each stage clocking in at a ridiculous 30-60 minutes each, and with no fucking checkpoints, that’s not the case here. Dying over and over forty minutes into a level as all hell breaks loose is no fun and that’s not a skill thing. Project Root is rarely about skill. You never feel in the zone with it because the game doesn’t give you the tools to make the kind of insane evasions that you might pull of in, say, a Cave shoot ’em up like Dodonpachi. Instead, perhaps you are expected to grind out upgrades until you are capable of surviving but this is such a slow, and truly joyless, process that you’d have to be of a different species to me to actually enjoy it.

Add to that the fact that your upgrades don’t carry across to different difficulties (the trophies don’t stack either) or the fact that you can legitimately end up lost in the game quite easily and you’ve got yourselves a shoot ’em up that is as stupidly designed as it is horrible to play. The only upside is that the graphics are reasonably well presented and clear but even then the uninspiring enemy designs and bland landscapes make that all a bit irrelevant. RICH

Project Root
2 Overall
Pros
+ It looks quite nice is a dull sort of way. + Cross-buy PS4/Vita.
Cons
- Literally created out of particles of 'anti-fun.' - Goes on for 1000% longer than it should.
Summary
If the overwhelming enemy forces don't get you, then falling asleep from sheer boredom might. Project Root is technically well put together but just isn't any fun. There's no sense of impact here, no dynamics. Just a very tiresome trudge through some of the least interesting levels ever created.
We use cookies on our website to give you the most relevant experience by remembering your preferences and repeat visits. By clicking “Accept”, you consent to the use of ALL the cookies.
Cookie settingsACCEPTREJECT
Manage consent