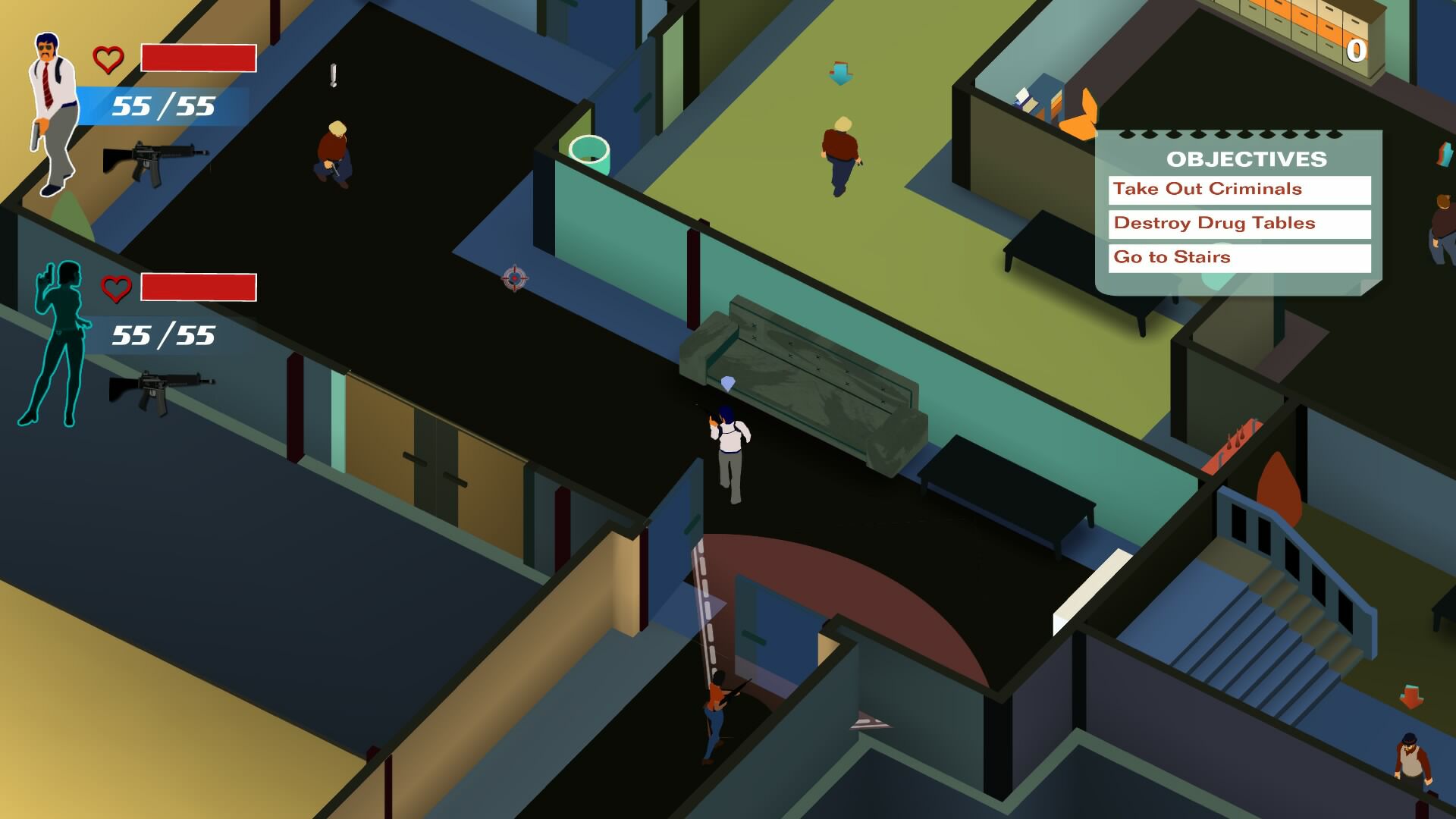 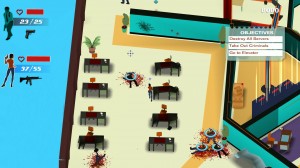 LA Cops is an isometric shooter in the vein of a 70s cop show where everyone has a moustache and nobody plays by the rules. They make their own rules in other words. Rules like, “When the AI is in control of your partner they will be as good as useless” and “The camera will make you run into the environment like you’re playing a Jon Ritman game”.

You may or may not have heard of a game called Hotline Miami. In this game you have a floor of a building full of enemies and you must dispatch them all before moving onto the next. LA Cops is basically the same thing. The camera has moved from top down to an isometric view and the visuals are 3D models rather than 2D sprites but in concept they are the same. Similar tactics work as well.

Unlike Hotline Miami in LA Cops you only have guns, you start with a pistol but as you level up you can unlock new ones or you can pick them up off dead enemies. If you do manage to sneak up on an enemy you can arrest them with a quick melee attack which nets double points but obviously is slightly more dangerous than taking them out from afar.

With a tap of the square button you can lock on to the nearest enemy which isn’t perfect but is necessary if you want to go on the offensive. On Nightmare difficulty (the third of three difficulties) the lock on is disabled and free aiming with the second analogue stick is incredibly difficult thanks to the isometric view point. When you’re aiming at an enemy the reticule does change colour but you’re not going to be able to burst into an room and kill everyone free aim, you’re going to have to be smart and try and attract the enemy through a doorway or around a corner.

To aid in this specific tactic you have an AI partner with you at all times. You can tell them where to go with the cross button but all they’ll do is run to where you point, there’s no other commands. You can switch between the two characters with triangle and if the character you’re controlling dies then it will auto switch to the other. If the AI partner sees an enemy (they have a vision cone but I’ve seen them shoot beyond it and turn around if they have to) then they should shoot it. Sometimes they’re incredible, mowing down waves of enemies single handedly and sometimes they’ll just stand there and take it. Luckily the enemy AI tends to want to kill the human controlled character more than the AI controlled one so you can buy yourself a little more time for the AI to react by standing behind them or around a corner from your partner. 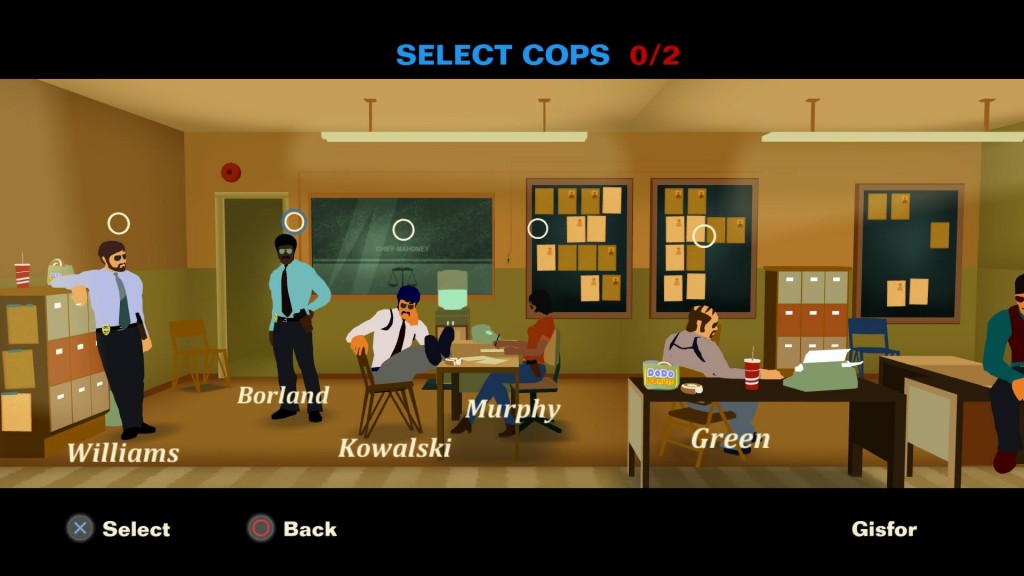 Despite being a game based around guns enemies will not take cover or shoot from a distance (which is nice that you won’t get shot from off screen) but they just run toward you, only stopping to take a shot once they are pretty close. If they didn’t the game as it is would have been pretty much impossible so in a way it’s a good thing, but it negates any chance of true tactical play with gun fights or breaching a room with your partner. If there’s a room with multiple enemies then you’ve just got to use the tactic I described above if you want to survive and it’s not a fun or rewarding one at all.

The camera itself fights against the gameplay as well and was probably only chosen to make the Hotline Miami comparisons less obvious. It’s in too tight for a start (you can zoom out slightly but why this isn’t the default view I don’t know), you can’t scroll the screen to see ahead, you can rotate the camera but that doesn’t generally help and as mentioned before getting an accurate shot when aiming is needlessly difficult. There is a mini map, but it just shows the exact same area that you can see on screen so it’s not like you can use it to plan ahead, it’s pointless. Also the top left screen is filled with massive icons of you and your partner and the top right is filled with your objectives which hides even more of the screen. The icons are so big it feels like an iOS game, though I imagine it would be completely impossible to play on a touchscreen.

The visuals are okay. Quite basic and the animations on the characters aren’t anything special but from a stylised point of view with it’s solid blocks of colour with no detail it works. Some of the music is quite catchy which is good as it just constantly plays as you try and retry a level so it never grates. Unfortunately the voice acting and story elements in general are really poor. The voice acting feels like place holder files and the scenes are obviously meant to be parodies of cop show things like the new female cop or running out of doughnuts but everything just falls flat and goes on too long. Luckily you can skip the scenes without missing out on much.

You get experience for completing each of the eight levels (plus five bonus levels) which you can put towards powering up your character but apart from speed and clip size I didn’t notice a massive difference when I upgraded my health and attack power, you still die super quick and enemies die reasonably quickly too. You can replay levels to grind up XP and if you want to max out all the characters you’ll have to as there are six characters altogether. You can use the same two on every mission and they are all exactly the same barring some minor differences in starting stats so there’s really no reason not to. 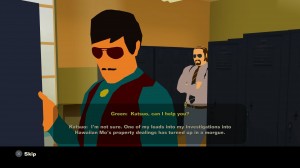 Ultimately I cannot recommend LA Cops. The set up is interesting and there are a couple of good tracks to listen to as you’re playing but so much of the design feels half baked and poorly thought out that it is not worth anywhere near the asking price. I completed the game on the default difficulty in less than a few hours and yes there are more difficulties but the game was already super repetitive long before then.

LA Cops
4 Overall
Pros
+ Visuals are interesting if plain + Some good music tracks
Cons
- Gun play is poor - Not a lot of content - Story/voice acting would be better off not being there - Camera is a hindrance - No point to multiple characters
Summary
I cannot recommend LA Cops. The set up is interesting and there are a couple of good tracks to listen to as you're playing but so much of the design feels half baked and poorly thought out that it is not worth anywhere near the asking price.