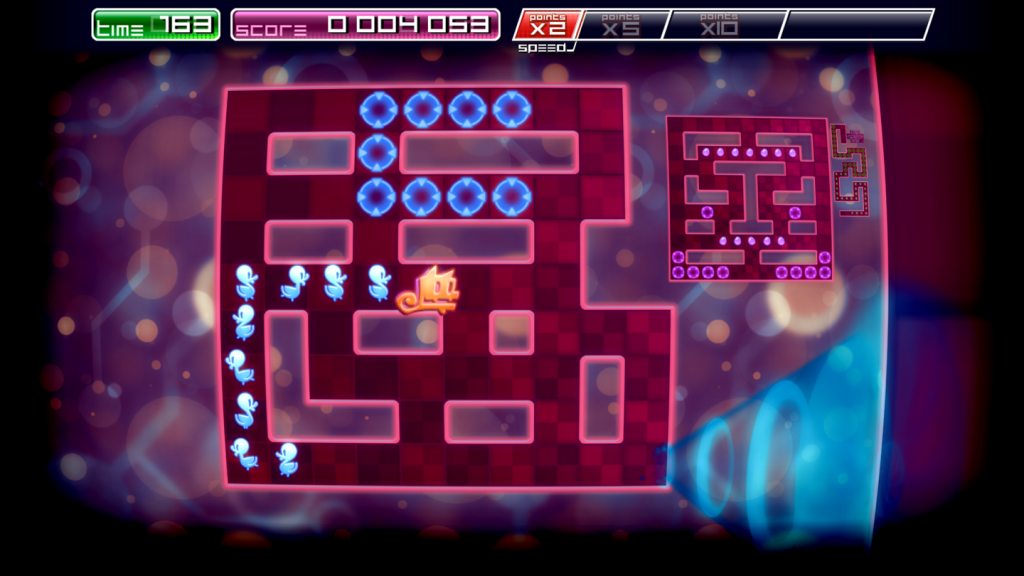 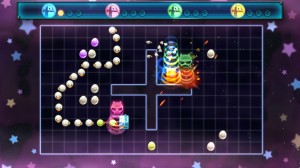 Neo-retro action from Pix the Cat.

Pix the Cat arrives on the PS4 and Vita as one of the freebies in this month’s PlayStation Plus ‘Instant Game Collection’ line-up and it’s a bit of a gem.  A typical neo-retro title, with classic aesthetics pushed through a neon filter, Pix the Cat is a simple arcade effort that is equal parts Pac-Man: Championship Edition, Chu Chu Rocket and the old mobile phone game Snake which is a pretty good combination in my opinion.

The game has you playing as the titular Pix, a pixelated cat who, for reasons unknown, is tasked with hatching ducks and returning them to their own safe zones within small Pac-Man style mazes.  Ultimately this means navigating a path to get to all the ducks before you enter any of the drop-off points on the map.   The ducks line up behind you giving you a long line of them to avoid which increases your footprint on the map.  That’s the Snake influence right there.  You can of course just grab some of the ducks and deposit them before going for more but everything about the game is geared towards getting the big scores and if you want to unlock more modes and extras, and look respectable on the leaderboards, then you’ll be looking to ‘perfect’ every stage.

What’s interesting about the game is that the stages are linked and you can move freely back through earlier ones in order to make more space for your tail of ducks and the fluid way that the game layers levels after levels really helps keep up the game’s frantic pace and even though you’ll have to attempt to memorise a lot of the stages, it never feels like an Ikaruga-esque chore.  Especially as you don’t get to play for very long before your timer runs out. 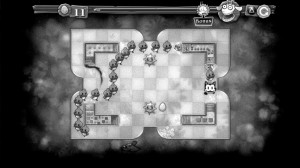 Pix’s ‘Nostalgia’ mode is a series of puzzles that will eventually cause your brain to leak out of your ears.

The game sets you various challenges – some score-based, others involve doing specific things like grinding the walls, rescuing large numbers of ducks and killing enemies (floating heads that you kill when you get your combo up to ‘fever’ levels) –  and these unlock extras such as music, commentary voices and new game modes.  Game modes are either harder versions of the main game or puzzle-based modes where you have a large number of single screen puzzles to work through.  These are satisfyingly tough and should provide some depth when the arcade charms of the main mode start to wear off.

The visuals are standard indie fare but they do present the action in a bright and charming way and the game’s Nostalgia mode goes for a ’20s animated style (much like the Xbox One title Cuphead) which is a nice addition to the visuals.  The music and spot effects are pretty forgettable but the commentary voices are a nice addition.  There’s not a heap of content here though but the devious level design and tight controls mean that Pix and his duck chums should keep your attention for a while.

That said, I did prefer the controls on the PS4 and found the Vita version to be harder in the crucial moments where perfection is key to increasing my score and it’s a shame that the two versions don’t share progress, scores or trophies.  Being able to work on my overall progress and score on the Vita and PS4 at any time would have been great and I don’t really understand why they’ve seperated them so much.

I really like Pix the Cat.   Initially it felt kind of pointless and basic but the score-chasing gameplay meant I killed hours on it earlier when I was meant to be playing Alien: Isolation.   I was only intending to have a quick go out of curiosity too.  I can tell you which game I’ve had more fun with and that’s kind of the point.  Pix the Cat is tremendously good fun.  It may be standard indie fodder but the game’s cheery presentation and immediate, addictive gameplay make it a winner and for zero cash for PS+ subscribers, you literally cannot go wrong especially if you own the PS4 and the Vita.

One thought on “Pix the Cat – PS4 Review”