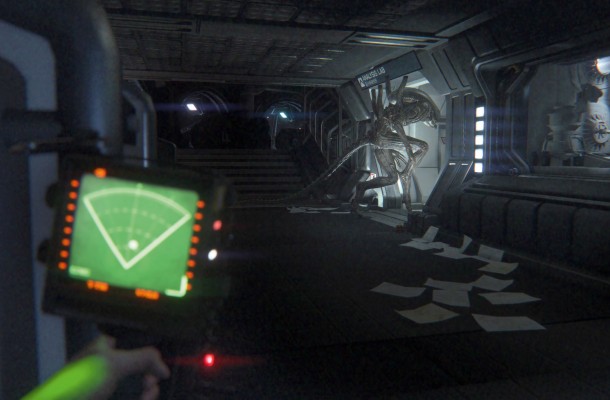 It’s not easy being an Aliens fan.  Everything to do with the franchise has been awful for at least fifteen years now (although, for the record, I love Alien Resurrection – well, apart from the entire ending) and us xeno-loving gamers have had it even worse.  I’ve been on the record before as saying that almost every Alien game is a disappointment.  I actually liked Aliens: Colonial Marines though.  As ropey as it was, I wasn’t devastated by any broken promises because I avoided all the hype.  In the end it was a nice four-player co-op shooter with some good virtual LV426 tourism on offer but it was no classic. 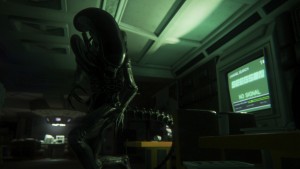 Alien Isolation however has promised a lot.  It’s marketed as a different type of Alien game.  The first indicator of that is that it is closer to Alien where as most of the games have used Aliens as their creative muse.  The difference is apparent right away.  You don’t get to spray pulse rifle fire at hordes of aliens as emergency lights flicker and your enemies scream like baby elephants.

Instead this is a much more composed and deliberate affair that sees you playing as Amanda Ripley, daughter of Ellen, who is an engineer that follows in the family footsteps and ends up in a space station that is being terrorised by a single alien.  Now that’s a bold step for a modern game.  Stripping out the smart-gun fodder to a single xenomorph?  It’s a brave decision and one that comes with some tough gameplay choices for the developers.

Initially all is well in Alien Isolation.  You start on Torrens, a similar ship to the Nostromo, all beige corridors and ’70s-envisioned future tech.  It’s years from now and everything looks like an Amstrad CPC 464 but that’s perfect.  It’s as close to the opening hour of Alien as you can get and I love the game for that.  The film is immediately and obviously a labour of love for the developers. 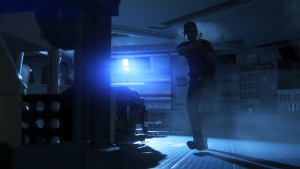 People are probably worth avoiding too in the game as most of them want to kill you.

Eventually you attempt to land on Sevastapol, a space station that has been damaged and looks deserted.  In classic Alien fashion, three crew members go to investigate and before long Amanda is alone and regreting her career choices.

Then the game will go one of two ways for you.  Everyone will experience the same game but some people will love it and some people will be me.  So what’s the problem?  Well.  My first session of the game saw me playing for four hours.  In that time I walked, and crawled, around looking for whatever switch I needed to press or key I had to find, in order to go somewhere else, to then go somewhere else, to then… well you get the idea.  Games that use ‘getting there’ as a major chunk of gameplay don’t impress me at all and Alien Isolation has vast sections of just that.  It doesn’t always signpost it very well, with the in-game map being needlessly confusing at times.

Somewhere in the second hour I got into a fight with some humans.  I had tried stealthing my way past them several times but these all ended in failure.  Eventually I walked right up to them and melee’d each person one after the other.  They stood there and let it happen.  Christ.

In the third hour I spent a lot of time sneaking past androids.  This was quite tense, as the things are very hard to kill, but the stealth here is clumsy and unrealistic with all your enemies appearing to be very short-sighted.

This all carried on into my second day’s play at which point the alien became more of a factor.  Now initially the alien is terrifying.  This is partly because it’s an alien but also because the game only allows you to save your progress at save points littered around the map.  Sometimes these are quite far apart and the idea of slowly retreading the last fifteen minutes is too nerve-wracking to bear. 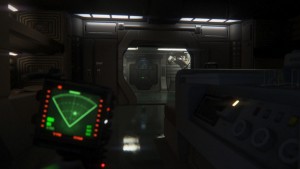 The motion tracker is basically the most useful thing the game gives you.

The times where you are in a small network of corridors with an alien in there are what makes the game.  Using your motion detector (sparingly, because the alien will kill you if they hear it) and crawling in and out of cover is the way to survive and it will get your heart beating.  However, the game can be a little cheap.  It’ll tell you to go somewhere to find an object but then when you get there it’ll send you somewhere else.  The whole time you are being stalked by an alien and, well, it all stops being fun pretty quickly.

The first time I faced this situation it was tense.  The second time felt like a chore.  Not being able to do anything at any sort of pace because the alien might be there, well it gets tedious.  Also, it feels a bit odd as you crouch behind a chair as the alien blindly stomps past you.  The alien starts to feel like a prison guard, especially as it never wall-crawls.  Also, it starts going a bit Scooby Doo when it goes in one wall and appears out of another or you take a transit car away from it in one area and it’s waiting in the next.

After that point, you are stalked pretty much the whole time, which turns what would be very ordinary objectives into lengthy struggles as you shuffle a few feet forward at a time so as not to alert the alien of your presence and all it really does is mask how utterly ordinary this game is.

There’s something about Alien Isolation.  It’s mature, the pacing is unique and it feels legit as an Alien story but the level design feels dated.  Early on I was in a room with three doors.  One needed a jack device to open it, one needed an ion torch and the last needed a plasma torch.  What the hell is this?  Am I suddenly playing Duke Nukem?  The game is just an excuse to do loads of backtracking and when the game goes on as long as this does (a punishing fifteen or so hours) your motivation to explore soon evaporates.  Especially later on when the alien is setting off your motion tracker.

The game is presented well with a minimalist interface, some restrained but detailed graphics and an authentic music score although with this much dramatic music, I couldn’t help feel like I was being stalked by a medium-sized orchestra.  Music is a great tool for increasing tension in a game and it does it well but overdoes it and before long you start tuning the music out rather than it messing with your mind like Silent Hill soundtracks do.

I’m not crushed by disappointment by Alien Isolation as my expectations were already low and I appreciate the game’s obvious affection for the source material but ultimately I can’t forgive games that are boring.  I can take bad graphics and even bad gameplay choices if the game is interesting but ’90s level design, endless backtracking and constantly moving goalpost objectives aren’t acceptable to me in this day and age.  Take the alien license away from this and you’ve got the most average game that will come out this year.