Not many people will be giving much attention to PAW Patrol: On A Roll given that it is one of the few retail games that dared pop its head above the parapet and release on the same day as Rockstar’s Yeehaw Simulator MkII but we figured it was worth a crack.

The somewhat different target demographic was no doubt a factor colouring the decision to release the same day as the already critically acclaimed juggernaut. PAW Patrol: On A Roll is also facing off against the likes of Nickelodeon Kart Racer and Just Dance 2019 so the publishers probably thought now would be a good time to ship to be heavily discounted in time for the Christmas buying season. Cynical perhaps, but those are the realities of games retail these days. 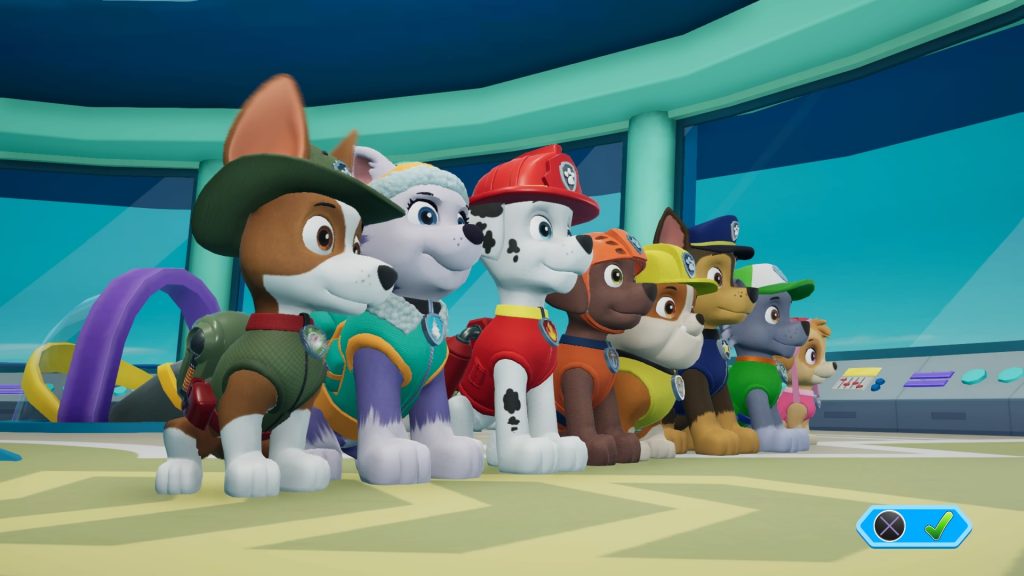 Those of you without young children in your household, you’re unlikely to be familiar with the Canadian toy company Spin Master’s cross-media juggernaut aimed at pre-school kids, PAW Patrol. The main angle of attack is the TV show that airs on Nickelodeon alongside Spongebob Squarepants and another Spin Master property Rusty Rivets. My kid has PAW Patrol clothing, a duvet, food bowls, toys and a game for his LeapPad kiddie proof tablet for example.

The titular patrol is manned (dogged?) by half a dozen or so puppies of varying breeds, each with a dog kennel/vehicle and ‘Pup Pack’ that infers special abilities on whichever canine is the focus of the episode. Marshall for example, is a Dalmatian who drives a fire truck that also transforms into an ambulance. He’s also clumsy which is a constant source of amusement to my kid.

The TV show is all safe enough, yet utterly asinine garbage with no redemptive features for the adult viewer. No subversive gags here, it plays it resolutely straight. All the adults portrayed are generally inept and in need of rescue, the main characters being rescued generally being Mayor Goodway or Captain Turbot. Both of them are clueless but well meaning. Though you’d not trust either of them in public office or in control of shipping respectively. 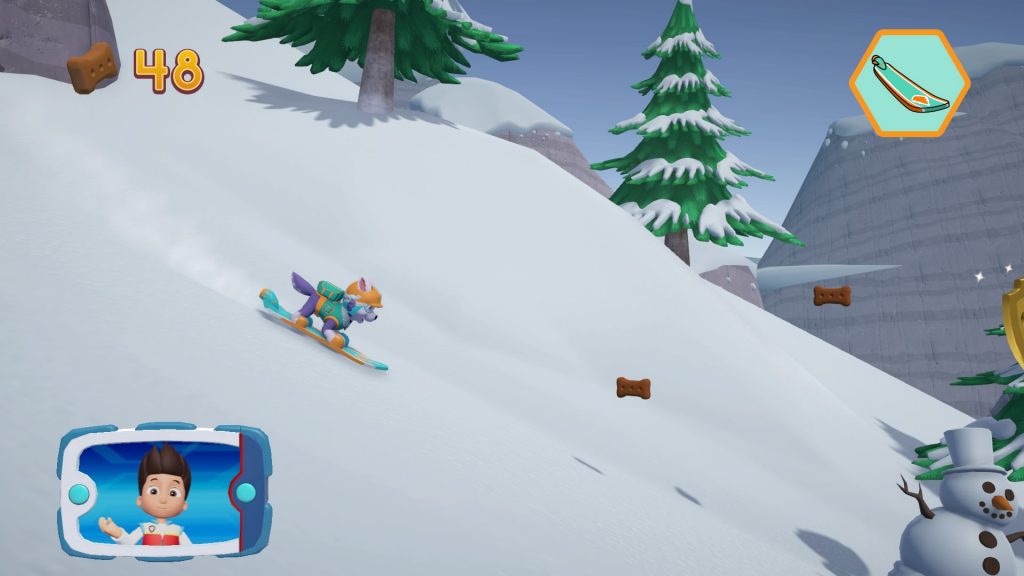 Paw Patrol: On A Roll the game then. It’s a rudimentary platformer with straightforward obstacles and two different pups to play in each of the sixteen levels. The main challenge comes from collectibles, of which there are 200 bones and 5 golden paw prints (aka PAW Patrol logos) per level.

Like the TV show, each level is pretty formulaic, with an introduction to the minor crisis at hand and the puppies chosen for the levels getting kitted out and going down a helter skelter to their vehicles before rolling out. The first half of a level and subsequently the first 100 bones are one puppy, and the second half and remaining bones are dedicated to another.

The 100 bones per half is helpful as it means you know whether you’re on track on a particular level with regards collectibles, though to be honest the levels are short enough that replaying isn’t a huge chore.

Each puppy has two unique abilities they can use, Marshall has a water jet that allows him to traverse short gaps and sure enough, a fire hose. The latter is used to put out a fire once throughout the game but otherwise sparingly. Amusingly he does encounter some monkeys that have been rolling in something pungent that he has to wash clean. 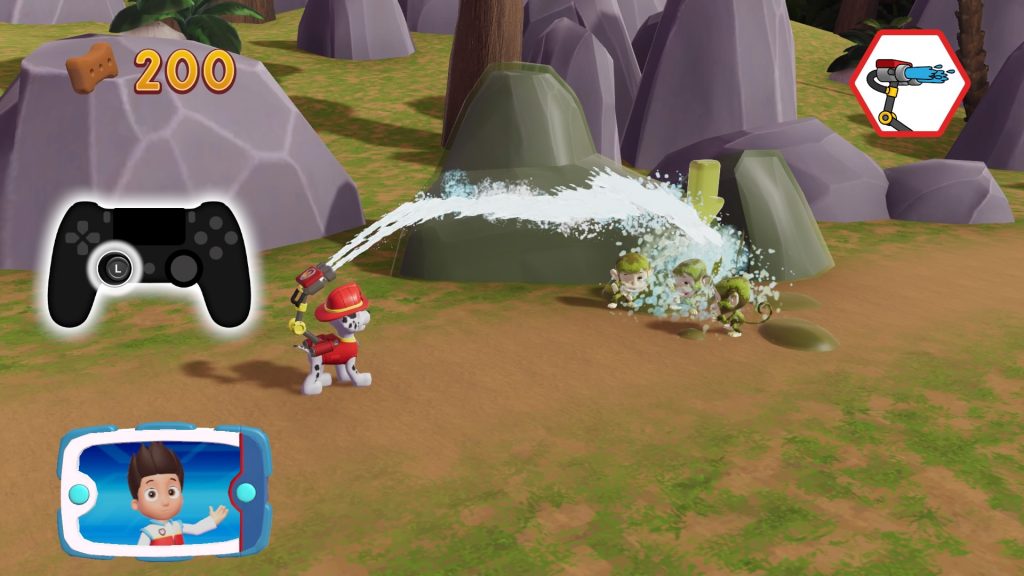 Once or twice per level your character is encouraged to ‘Yelp for help!’, staying strictly within the  PAW Patrol licence terms no doubt. This entails one of your fellow Patrol members showing up to clear an obstacle, be it a pile of rocks or a snowdrift.

Although the only time the token girl of the gang Skye shows up to help, she uses her helicopter to pick up a log so you can get across a gap. In one laughable late game appearance, she arbitrarily shows up to put a log across a gap you could easily have jumped over.

Some of the unique abilities have a light puzzle element, though nothing more complicated than shape matching. It’s nothing that will tax a kid who had a block toy as a baby anyway. 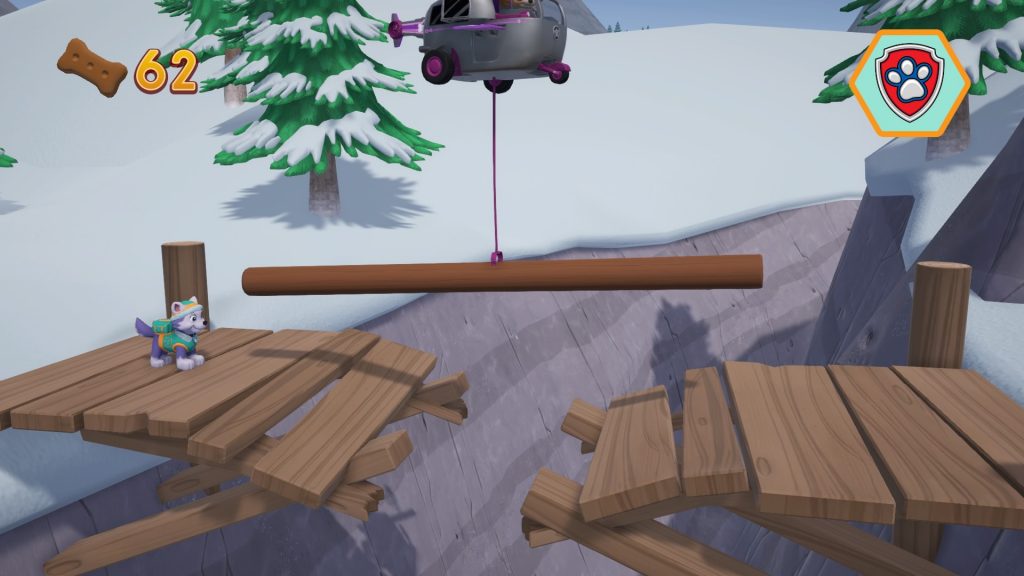 The platforming is pretty vanilla and not really challenging, especially if your kid has already cut their teeth on Nintendo’s offerings. The double jump and flying/underwater sections are likely to be the only obstacles to younger players at least.

Talking of the trophies, they’re generally straightforward but consisting of just 12 bronze and four silver they were never going to be too challenging, even to a younger player.   IThere’s no platinum on offer though. 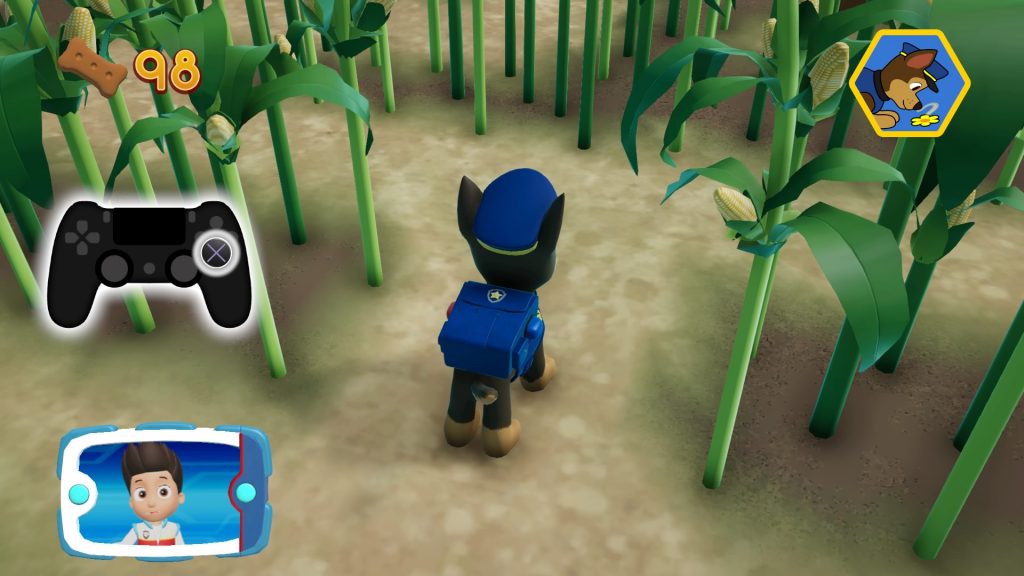 The original Canadian voice cast very much phoned in their performances for the characters in the original cartoon, so we’re heartened to observe the UK voices are present and correct as they do a far better job within the constraints of the source material.

We can’t help but feel this is a by the numbers kids licence though, out just in time for Christmas. To a younger kid they’re sure to be delighted but for older children it’ll probably disappoint. The developer was never going to pull out a Mario Odyssey style masterpiece, but it does feel like they could’ve perhaps done a bit more than a side scrolling platformer. The vehicular aspect is woefully underused for instance, we can’t help but wonder what could’ve been done if Traveller’s Tales had done a Lego version. 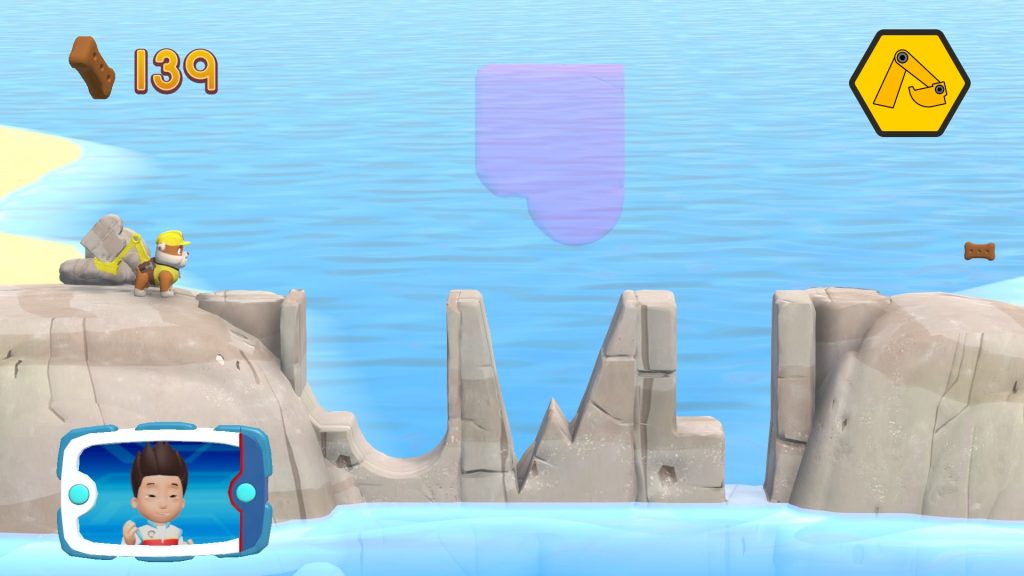 Some levels in particular recycle assets to such an extent that we were jumping from a sequence of rocky platforms what felt like half a dozen times over the course of one level.

All in all, PAW Patrol: On A Roll is sure to appeal to the already converted, but for any kids not familiar with the source material it’s just a rudimentary platformer with none-too-difficult collectibles to hoover up.

PAW Patrol: On A Roll
6 Overall
Pros
+Faithful to the kids show to a tee, thankfully with UK voice cast
+Child friendly, though if they've moved on to FPS games already, probably not for them
+Sixteen levels so plenty to keep kids occupied
+Anything that stops them playing Fortnite is good, right?
Cons
-Not that challenging, even for younger players
-Even kids deserve platinum trophies
-A sidescrolling platformer is hardly innovative, the TV show has more to it than this
-Overuse of some assets, yes you Mr Rocky Outcrop
Summary
A safe kids licence that will be sure to delight the younger members of your household. Platforming by numbers otherwise. Add a point to our score if they're already a fan.