Panorama Cotton continues the recent series of Cotton ports that have been hitting the PS4.  We’ve seen Cotton (as Cotton Reboot!) and, more recently, Cotton 100% get the port treatment but this game is a little different.  Where most of the other Cotton games are 2D horizontally scrolling shoot ’em ups, this one is an into-the-screen, pseudo-3D shooter functioning much along the same lines as the classic Sega shoot ’em up Space Harrier.  Also, it was never an arcade game.  This one only ever saw a Mega Drive release back in 1994, a limited one at that.

Being Japanese in origin, the plot to the Cotton games is a little bit out there.  As usual you play as Cotton, a young witch who flies on a broomstick.  Your companion, Silk (a small fairy), follows you around as usual too.  In this game Silk’s sister informs you that the Fairy Queen, Velvet, has gone a bit mad because she’s been eating burnt candy.  At least that’s what I’ve been able to gather from Wikipedia as the game’s cutscenes are all in Japanese and don’t have subtitles. 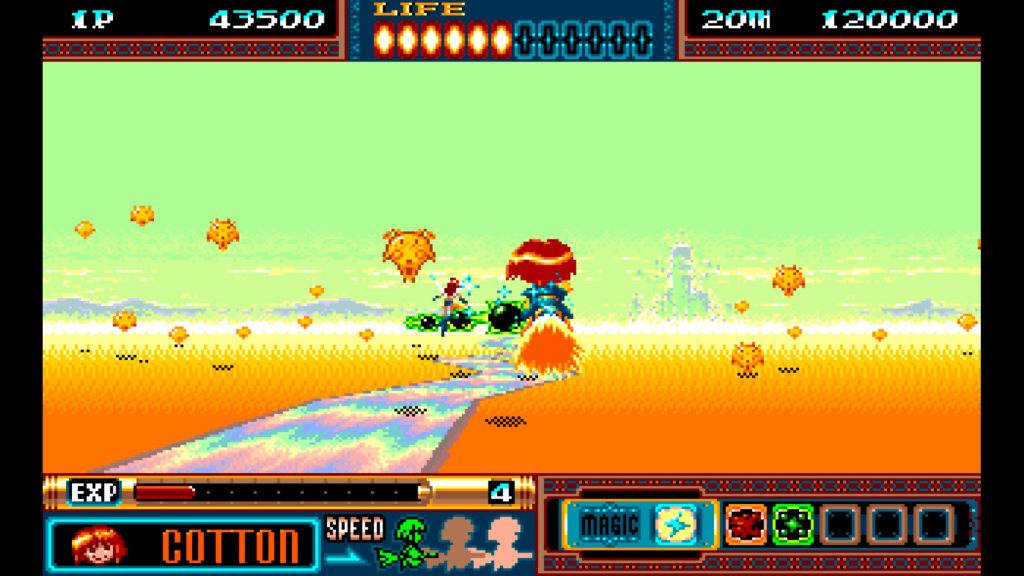 So, ignoring that silliness, let’s get into the game.  Panorama Cotton offers you two versions of the exact same game.  A standard mode and an enhanced one.  While these look and play identically, the enhanced mode gives you access to a very handy and generous rewind feature and quick-saving.  However, unlike Cotton Reboot, you don’t get updated visuals in either mode although you do get some surprisingly customisable CRT filters to make the game look like it is running on an old monitor.

The game is set across five stages and each of those sees you flying forward, into the screen, as enemies come at you in the opposite direction.  You’ll be shooting them down and avoiding obstacles which is made fairly easy because you can move up, down, left and right around the entire play area.  The only additional gameplay element to consider is the return of the coloured crystals which give you special magical attacks.  However, the exact way they work is never explained making it hard to use them in any kind of viable strategy.  Instead, you’ll probably find yourself constantly circling the play area so that nothing hits you. 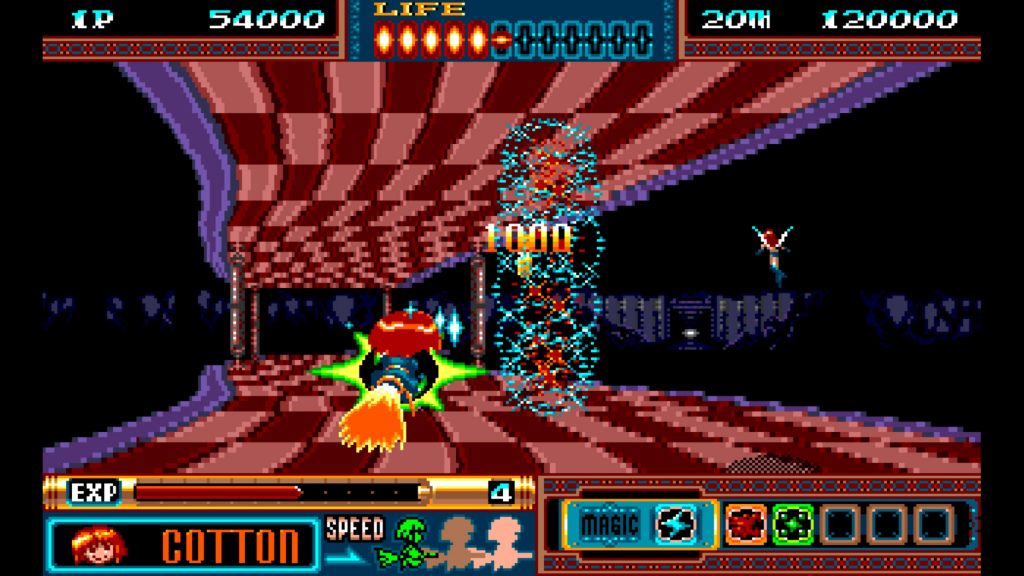 That tactic comes straight out of the Space Harrier playbook and is a bit of a necessity with this type of game because you shoot directly forward, so you can only hit things that are directly in front of you which is the one blind spot you’ll have because, yep, that’s where your sprite is.  That’s just a limitation that the genre had back when it was still essentially moving and scaling 2D sprites (games like Rez avoid it by putting you lower on the screen but that would have involved some very clever maths back in 1994 so it’s understandable).

Despite the compromised viewpoint and lack of instructions, Panorama Cotton is still quite playable and it uses the pseudo-3D gimmick fairly well with some good visual variety between its five short-ish stages.    From empty sky stages to tracks, roads and crazy fantasy settings, the game does its best to keep things interesting and we did appreciate the bold use of colour.  But that said, the visuals are pretty dated as 1994 is where developers were trying to create proper 3D games on strictly 2D hardware and so while this was amazing to see in 1994, it doesn’t really work now that we have games like Rez and Panzer Dragoon. 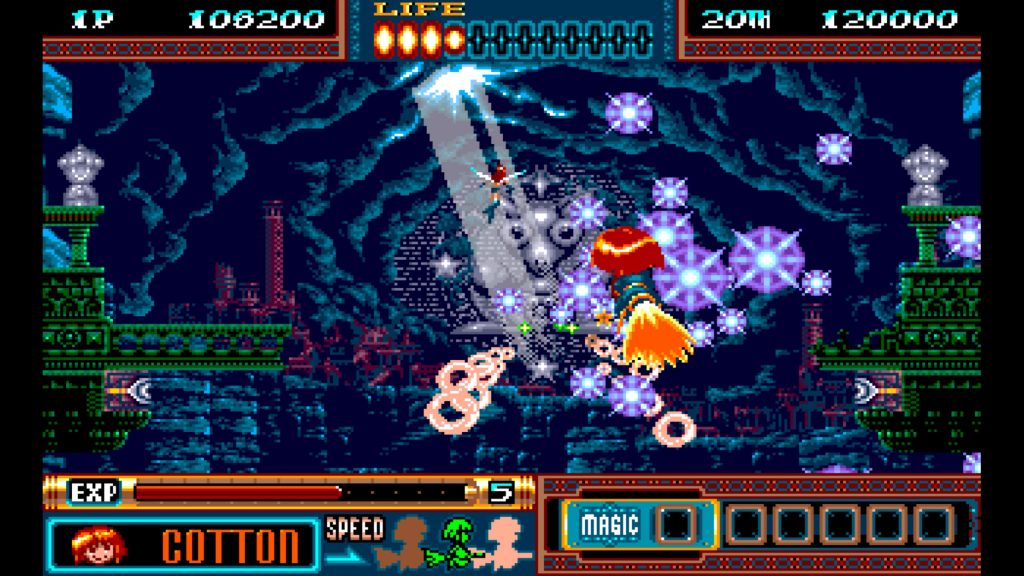 One major issue is that the draw distance and sense of depth is quite lacking.  This is particularly apparent when trying to capture the coloured crystals that fly towards you.  Trying to position yourself relative to them is needlessly tricky and so you can imagine how much harder it is to figure out with things that are actively trying to hurt you.  Damage can really can happen very quickly and that’s a problem because damage lowers your firepower.

However, one unforgiveable issue is that we found ourselves taking damage for no reason.  Using the rewind feature, we’d go back to see what happened but it was clear that nothing was hitting us.  It turns out that some obstacles aren’t being rendered properly by the emulation and so we were being hit by things that the game wasn’t showing us.  That’s pretty bad.  I mean this is a fairly lazy port job anyway but you’d think that properly playtesting such a short game would be an easy process.  Apparently not. 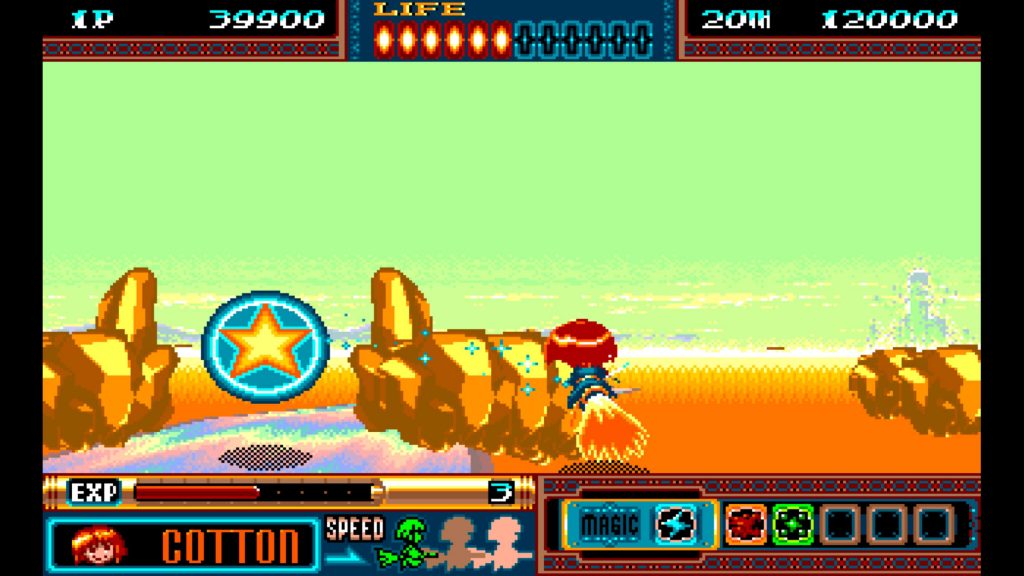 So when it comes to our opinion about the game, it really is a game of two halves so to speak.  The negatives are apparent.  It’s short, dated, lazily-ported and technically flawed.  However, it’s also a game that nearly everyone in the West would have missed first time around and the rewind feature means that you can enjoy the interesting visuals without having to worry about the gameplay niggles.  And for all of its faults, the game is still quite playable as we said.

But overall, Panorama Cotton probably won’t hold much appeal to anyone but hardcore Cotton fans or Mega Drive obsessives.  For everyone else it’ll just be a interesting curio.  Modern gamers will get nothing from it but those of us who remember the awkward transition of gaming from 2D to 3D can at least admire what an ambitious game this was in 1994 and we’re never unhappy to see obscure games get a new day in the sun.

Panorama Cotton
4 Overall
Pros
+ An interesting game to get the port treatment
+ Visuals are very ambitious for a 1994 game
+ Reasonably playable
+ Rewind feature takes away some of the pain
Cons
- Lazily ported
- Flawed emulation
- Dated gameplay
Summary
While we're always happy to see obscure retro games get a new audience, it's hard not to be disappointed when they get a lazy port like this. As retro fans, we did enjoy aspects of this lesser-seen Mega Drive title, the enjoyment was fleeting and tempered by some core gameplay issues and problems with the emulation.