Outbuddies DX is an old-school Metroidvania-esque explorer/platformer/shooter from one-man developer Julian Laufer that tells the story of Nikolay Bernstein, a maritime archaeologist who unwittingly becomes trapped in Bahlam, an underwater fortress (not the South London town on the Northern Line) that was home to the Old Gods, but now harbours hostile creatures who have taken it over and are subjugating the Wozan, a friendly tribe of mining creatures.

Your mission is to clear the fortress, liberate the Wozan and escape with your life.  To do this you’ll need to combine your agility and marksmanship in true Metroid fashion.  This is a large game and one that will require you to explore, find new equipment and weaponry and figure out how to navigate some tricky gaps.  However, what separates Outbuddies from its main inspirations is the Buddy unit, an occasionally helpful device that can perform a host of handy extra functions. 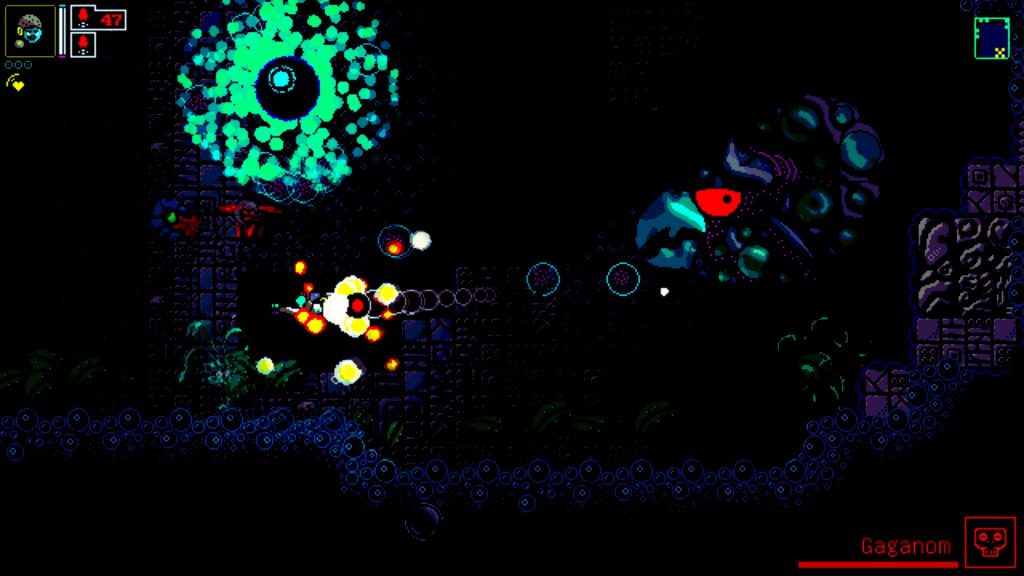 Initially the game is all about the jumping and shooting.  Gaps have to leapt over, wall jumps have to be used to navigate upwards to higher ground and enemies present themselves looking to be shot in the face with your regular blaster.  A handy dodge roll mapped to

gives you a bit of extra agility and survivability too but you’ll eventually come to obstacles you can’t overcome or doors that you cannot unlock.  This usually means that you need to find an object somewhere else in the map that will grant you the ability, or firepower, to progress.

A stronger blaster allows you to open up the next tier of doors while Buddy’s ability to lift objects and hack enemies, allows you to work your way into previously inaccessible areas.  Buddy also updates your map and can just be used to scroll around the room you are in to get your bearings and form a strategy for progressing further.

While the combat can be a bit stiff, the platforming oddly is the more engaging element of the gameplay.  Thankfully though, Outbuddies, applies equal focus to both with some rooms requiring more thought and exploration while others just need clearing out.  This mixes up the action and stops every new room from feeling like a puzzle that needs solving.  We appreciated that.  The combat does ramp up a bit as you go along though and, of course, there are occasional boss battles which tend to test your ability a bit more than the regular enemies do. 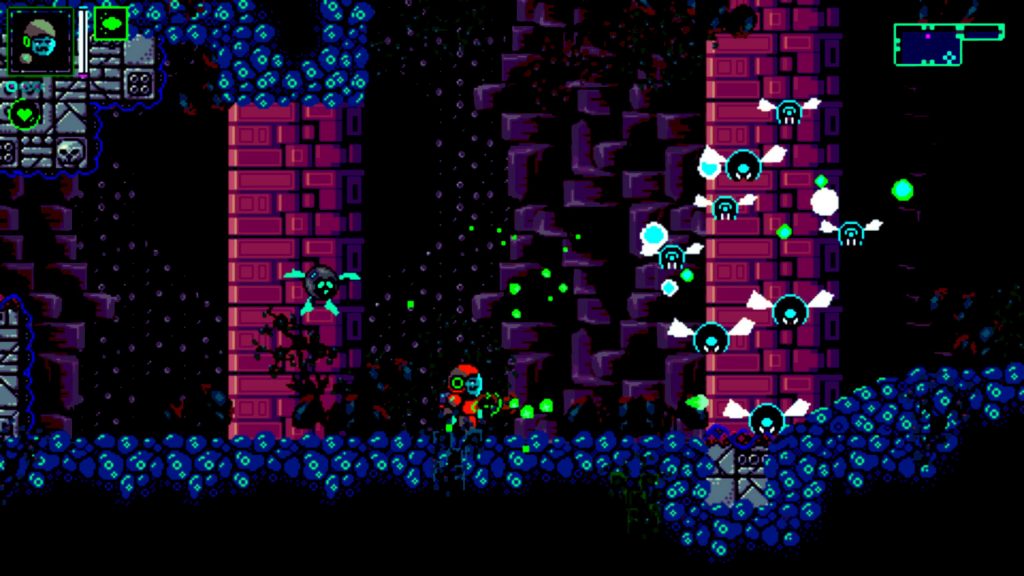 What we like is that Julian has really created a game of some scale here.  The map is large, the gameplay is relatively varied and the Buddy unit does add something to the gameplay.  Much of the game is set in water which provides a nice contrast to the on-foot sections too and the bosses do all bring a degree of spectacle to them.  In many ways it does what we ask all retro-inspired games to do, it provides a game that would have made waves back in the 1980s.  Back then the scale and scope of Outbuddies would have set it apart from the crowd.  This isn’t just a game by a guy using retro aesthetics and techniques because they are easier, Outbuddies feels like a labour of love.

It’s not all good news though.  The old-school approach means we are lacking a few comforts.  The map screen is unhelpful and unwieldy, we often found ourselves stumped wondering what to do next and too often the way ahead it through some destructible bit of scenery which has to be scanned by Buddy.  This is a dark game and while that helps set the creepy underwater vibe, it can lead to problems when you just want to progress.  Also, the backtracking in this game is slow.  There are teleporters dotted around but these aren’t useful at all.  Everything just feels a little unhelpful at times.  This leads to slow progress and slow progress leads to frustration and none of that is a recipe for fun.  But when you do find the way forward, your brain tells you that you’re clever and gives you a nice little Scooby Snack of dopamine.  Then you’re re-energised because you’ve got fresh tunnels to explore and you’re not stuck or lost anymore.  Until the next barrier anyway. 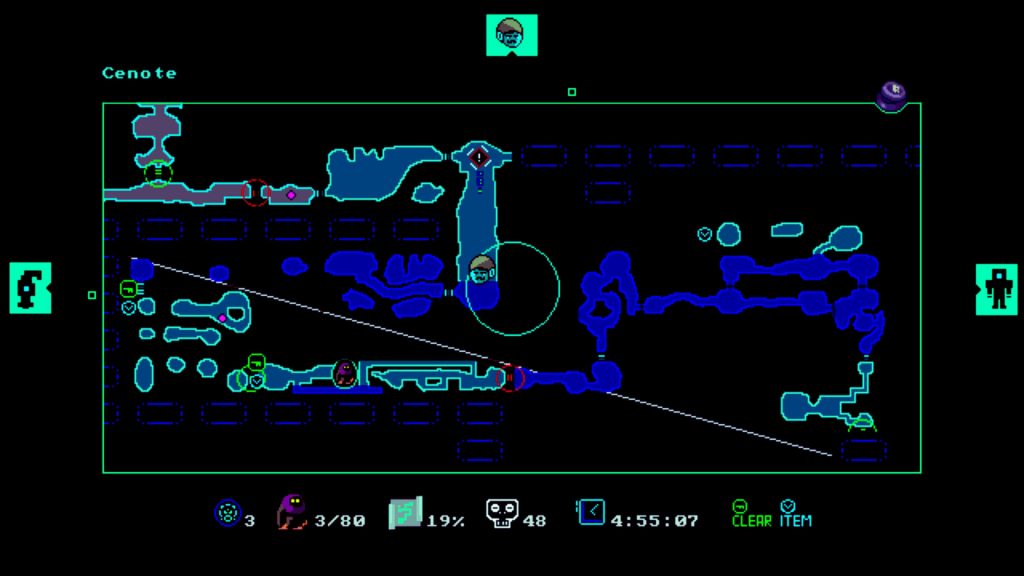 When we think of some of the best modern Metroidvanias, such as Shadow Complex or Dust, we don’t remember wasting time being stuck or lost.  The way forward was always more clear and certainly not hidden behind destructible walls that look like regular walls or any nonsense like that.  Outbuddies does things differently and is probably more authentic about things but is it more enjoyable for it?  Probably not.

Another hindrance is the game’s controls.  The game does a lot.  Dashing, rolling, jumping, shooting, switching guns, navigating menus and so on but it’s not handled in the most intuitive way.  Holding down on the right stick changes your weapon but holding up switches all control over to Buddy.  99% of the time that we used buddy, we found ourselves pressing the wrong thing or completely losing our flow when controlling Nikolay again.  Hours in things hadn’t improved.  There’s something off about the control layout and it is probably because the game is trying to do too much.  This applies to the map screen which is just full of awfulness. 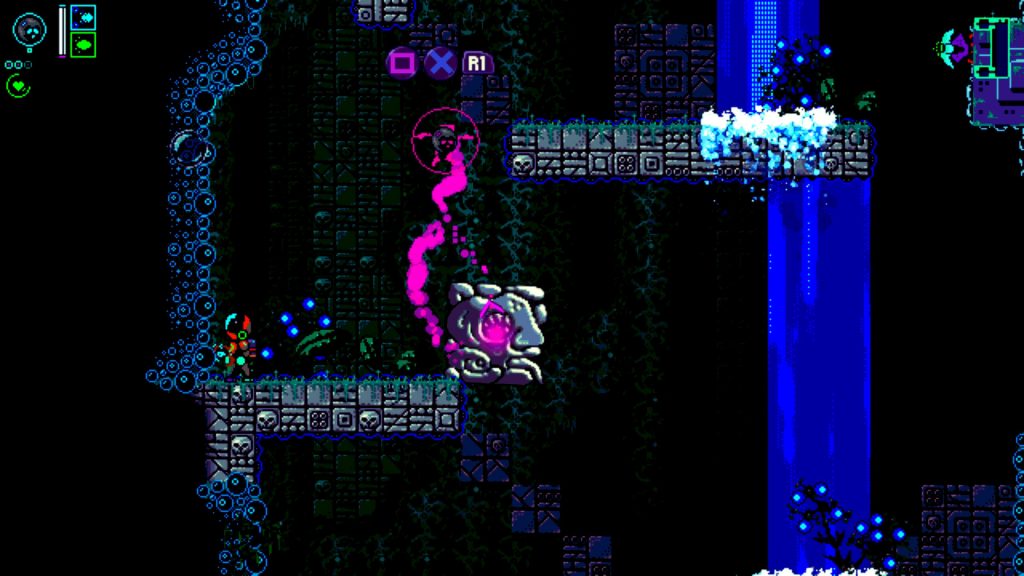 For example, you want to navigate the map using the left trigger.  But no, that takes you to either you weapon screen or gear screen.  However, both these screens are useless, offering zero interactions at all.   You can view, upgrade or interact with any of your stuff so why there are two whole screens devoted to it are a mystery.  Instead you navigate the map with the right stick but even then the map is rubbish, giving you the minimum information with no helpful hints as to where to go.

Also, you never feel like your upgrades feel like actual upgrades but rather just keys by a different name.  We never felt more powerful, nimble or agile but rather just able to get through a different door.  Your progress is entirely designed in relation to where you are and where you are going, you’re never overpowered as such.  Still, we’re always moaning about the laziness of randomly generated levels and so we do at least prefer this approach.  But when you do get something handy, like a steam-powered double jump all that happens is that the gaps get wider.  Indeed, after around six or seven hours in, the game becomes much more about difficult platforming action with enemies now becoming temporary platforms.  It does make things more challenging but does make any exploring even slower than before. 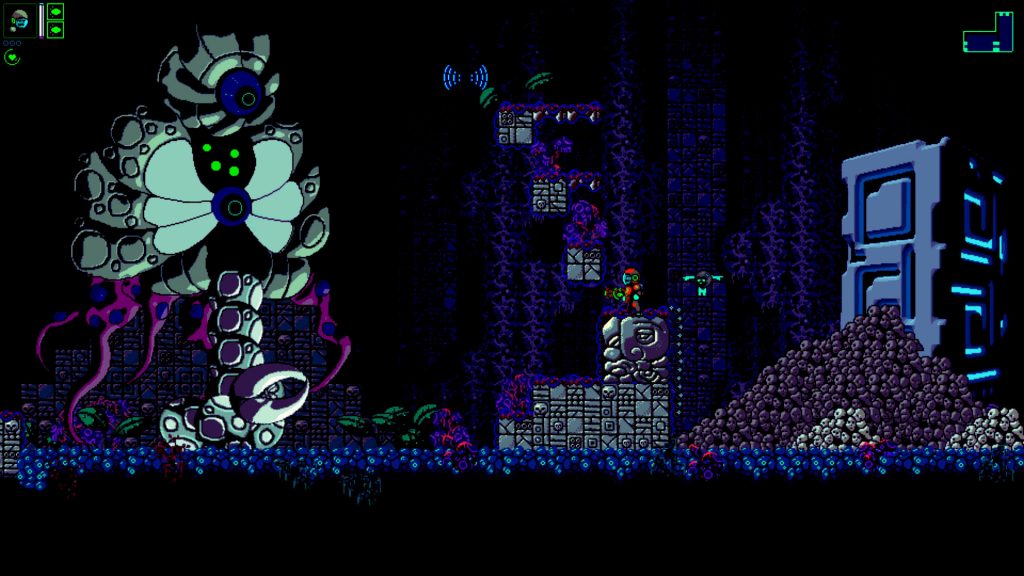 The game’s presentation is somewhat mixed.  The visuals are very 8-bit with colour choices that seem to resemble a limited system palette rather than what is right for the game.  Everything is so blue and gloomy and dark that it makes the game world of Bahlam a little bit uninspiring to be in.  The animation is also pretty simplistic too.  So, overall the graphics didn’t wow us (some of the boss designs were pretty good though).  On the other hand, the game sounds great with good effects and a well-crafted soundtrack that really suits the game and elevates it.

In the end we’re torn when it comes to Outbuddies.  We often have to review cookie-cutter 8/16-bit style run and gun shooters and platformers and they are usually pretty soulless.  That’s not the case here.  Julian Laufer has created an epic game here which has been well-designed and competently put together but, as is often the case, we feel that a little more external playtesting would have highlighted some of the game’s less friendly aspects.  This exact game with a few quality of life features would make for a great time but instead it’s really just a frustrating one for a lot of the time.  But when you do make progress, the mix of shooting and platforming works well enough.  While the game drops a few points for playability, it definitely earns some for ambition and execution and if you’re a serious Metroidvania fan, you’ll find a lot to enjoy here.

Outbuddies DX
7 Overall
Pros
+ Impressive scale and ambition
+ Good, varied mix of gameplay mechanics
+ Decent soundtrack
Cons
- Unimpressive visuals
- Progress is slow and this is a long game
- Navigation can be tricky and the way forward is often unclear
- Leans heavily on difficult platforming later on
- Controls are fiddly
Summary
You have to admire the scale and scope of Outbuddies DX, a Metroidvania that is packed full of gameplay mechanics and ideas. It's arguably too slow, too long and a little bit unfriendly in terms of its clumsy interface, controls and map design but your patience is rewarded especially if you enjoy exploration, platforming and big boss battles.