We’ve probably all, at one point in our lives, dragged matchbox cars across the bedroom floor or the kitchen worktops. Letting our imagination place impossible jumps, hazards and courses that weave around tables and chairs. Games are no stranger to the concept but it’s been a while since a toy racer has really hit the stores. Rumbora Party Games are the latest developer to have a crack at these mini machines and, whilst the concept and presentation is wonderful, the package feels fairly empty. 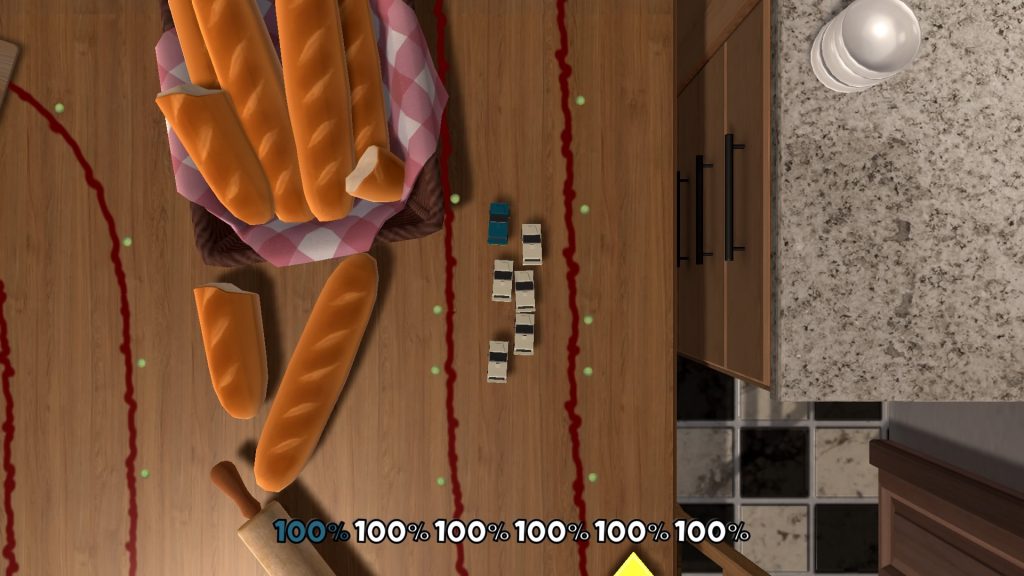 Tinker Racers does get the basics right. Controls are simple and responsive with acceleration tied to the cross button. Movement is handled by the left stick and the overhead perspective allows for some tank controls to play an effective role in moving your tiny vehicle around the tabletops. It has a good feel and needing to slow your speed down is as simple as easing off the gas and sliding around a corner. The only other available control is largely for reversing with circle. I have briefly tried to use that for braking but it’s far too sudden to be cheekily applied.

Races are treated more like eliminator events. Each competitor has a health bar and colliding with objects takes that health away. Whilst you can use that to your advantage, it’s not really advised to hit the opposition for all they’re worth. I don’t find my vehicle especially resilient my favoured route to victory is to lead from the front. Once a car drops out of frame, they’re eliminated so it can lead to a thrilling chase. Arrows will boost you along and track limits aren’t heavily enforced. As long as you can find a corner to cut, you can make some gains. 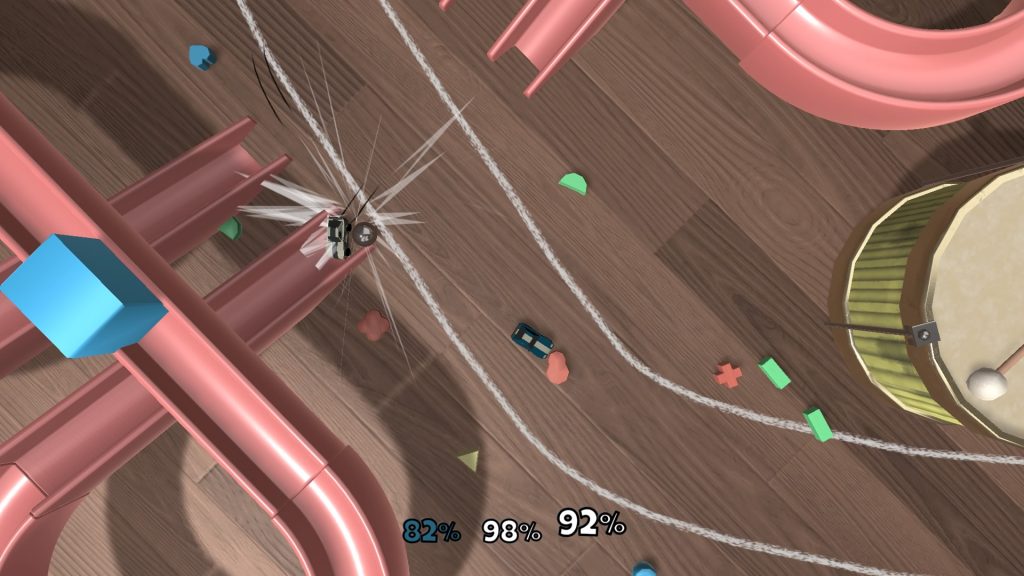 Races take place in a first-to-five format so there’s always the opportunity for some back and forth between you and the other races. It is constantly competitive with the AI putting up a considerable fight. It’s a real shame you can’t tweak their capabilities but they aren’t brutal. It’s all accompanied by a soundtrack that, whilst repetitive, does speed up as the stakes heighten. Collisions come with a realistic plastic clash that definitely hammers home the toy box feel of the vehicles.

Track design feels very inventive. You’re given about half a dozen tracks for each of the game’s three locations. The bedroom tracks contain a hodgepodge of children’s toys, marbles and a general sense of chaos. The tracks are marked out on the floor in a fairly makeshift way and it has a really clever visual style to them.

Moving into the kitchen allows for the raised worktops to deliver some devilish drops. Bridges make an appearance and it’s the first time we see gravity becoming a viable weapon in the game’s combat. Ketchup and other condiments impede competitors and, much like the other areas, there’s been some considerations taken as to just how you would construct a track within the confines of a room. 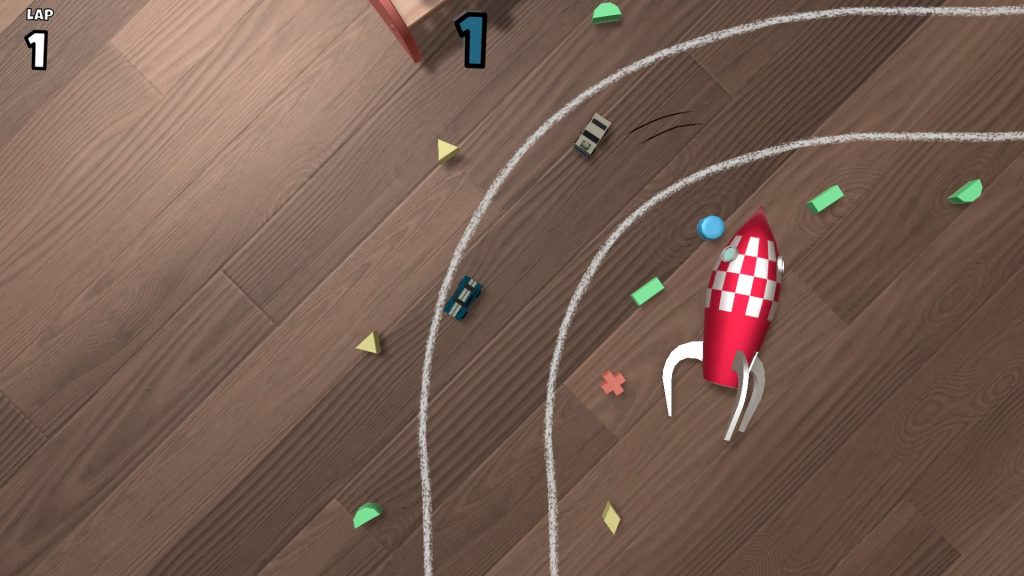 The tracks all build into more complex layouts which allows for you to slowly memorise them. It’s a pity the random elements can undo a hard-earned lead but the sheer creativity on display is one of Tinker Racers‘ strongest aspects. Each track seems to build on the last so you start to see tweaks that change up a familiar pattern. New corners are plotted out, boosts are re-positioned and it does result in a fresh take on something you’re starting to feel comfortable with.

It’s a pity this inventiveness doesn’t lead to more options for the player. The campaign is very rigid in its progression. You unlock the game’s 18 tracks by winning events. You’re presented with just the one event at a time so the progression is rather stiflingly narrow. At least time attack allows you to practice at the more tricky circuits. Standalone races take on a more traditional five-lap affair. It’s fine but it lacks the knockout competition of the campaign. You can compete against others in local multiplayer which, I suspect is where Tinker Racers will get the most joy.

Unfortunately, Tinker Racers remains very tightly constrained when it comes to options. During the campaign you will hop into different cars which do handle differently. There is no way to pick from these vehicles or even change colour. You can’t alter how many rounds events will take, set handicaps or anything like that. It would’ve been really nice to see some variety on offer and it does really dampen what is a racer that is great in concept.

Being tied into repeating the same events can be tiresome, too. Whilst the tracks are well designed, the random elements can lead to some unfair moments. Being blown off course prior to a jump or tipped over by a collision with a well-placed marble can usually result in an instant defeat. A packed grid will always lead to contact and the opposition seem much better at self-preservation.

It’s that frustration that ultimately undermines my enthusiasm for Tinker Racers. As good as the circuit design and home-made aesthetic is, the surrounding package feels constrained and limiting. It feels like a game best dealt in small doses and the whilst the campaign likes to gate you from seeing new tracks, the 18 on offer my come all too soon. It’s cheap but I still feel like you can find better elsewhere.

Tinker Racers
5 Overall
Pros
+ Really clever track design that takes advantage of the game's three locations.
+ I adore the homely aesthetic.
+ Music does well to keep up with the action.
+ Competitive racing that's easy to control.
Cons
- A very restrictive campaign.
- AI can't be tweaked and can lead to some frustrating, late-game challenges.
- Almost no options for players to customise modes and vehicles.
- As cheap as it is, I tired of it quickly.
Summary
Tinker Racers starts promisingly with a great home-made aesthetic and some inventive track design. Unfortunately, the restrictive campaign hampers a game that barely moves beyond a clever concept. The racing is competitive but success in the latter stages seems to require more than a slice of luck. Local multiplayer could at least deliver some longevity but the lack of vehicle and race options result in a very narrow, frustrating experience.