Othercide crept up on me. The code came into the PlayStation Country inbox and I took a quick look at some info and it seemed the perfect fit. I’ve come around to the rogue-like/lite style of progression, it’s a tactical game which I often adore and the graphical style was striking. Upon firing it up I was filled with a sense of anticipation and excitement that the best rogue-likes manage to muster every time you play, whether it’s the first or the hundredth time. It’s reminiscent of a lot of titles but has a few ideas of its own, but do the individual elements combine into a classic? 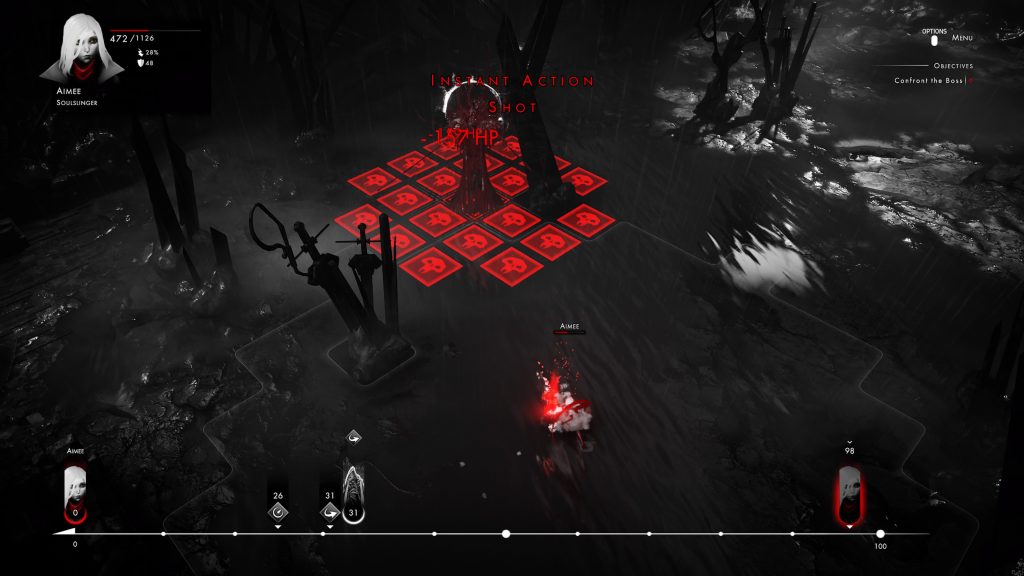 An entity called The Mother has been battling The Suffering to protect The Veil. As she is overcome time and space converges and she calls on her Daughters to take her place. Her Daughters don’t yet exist, they are born from her soul ready to fight and are powered by her Memories. The story is intriguing but not particularly straight forward. Little passages of text are drip-fed to you as you progress and characters and enemies have little titbits in their bios (along with tips on how they behave in battle). I did enjoy it, but if you want to ignore it you can and just get on with gameplay.

Othercide is a turn-based tactics game. You can move around the quite small arenas on a grid using AP (ability points). Unlike the more streamlined XCOM you have, by default, one hundred AP to use as you see fit. The further you move the more AP it takes and most abilities cost a set amount of AP to activate. Managing the enemies as they spawn in along with your AP pool is the key to success and fans of the genre will be nodding their head in a knowing fashion here, but there are some wrinkles to the formula. 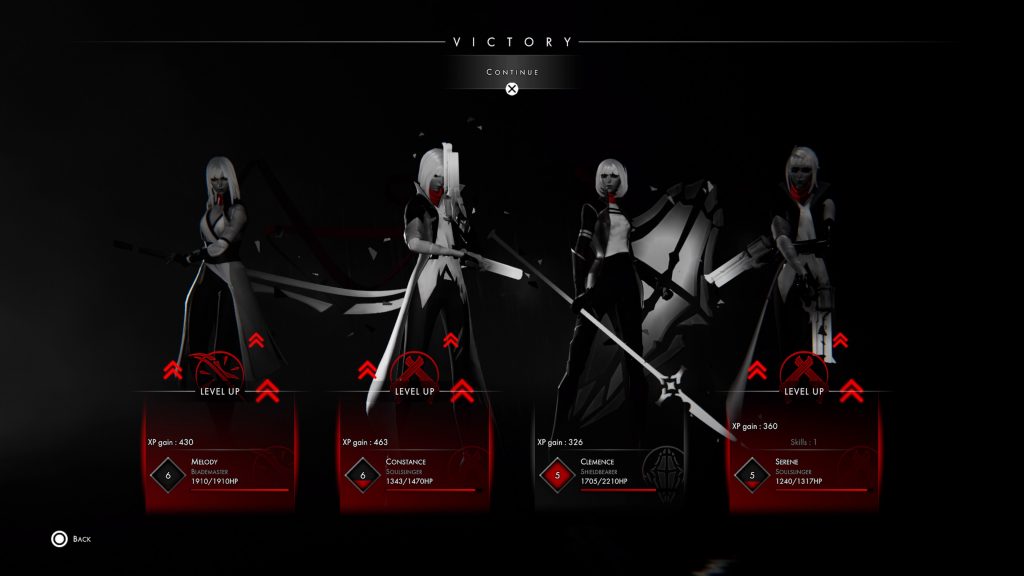 If you only use up to fifty AP then your next turn will come around relatively quickly. If you dip into that final fifty AP then you ‘burst’, so can use more abilities or move further but you’ll have to wait longer for your next turn. Ideally you won’t be bursting but doing so in certain circumstances can save you unwanted damage. Managing the ‘timeline’, the bar at the bottom of the screen which shows turn order, is also very important. Much like the old Grandia games you can delay enemies with certain attacks, giving yourself a chance to get a finishing blow before they hurt you. Preserving health is an important factor as you only have one way of healing.

Outside of battle you can use the resources you win. Experience will obviously level up the Daughters and make them stronger and give you a choice of two skills to unlock at set milestones. You also unlock Vitae which is your basic currency. With this you can germinate new Daughters and apply Memories (perks) to attacks in order to buff them. You can also resurrect fallen Daughters (with a very rare item) or sacrifice one in order to heal another. That’s the only way to get HP back on a character. Not only that but it needs to be a character of the same level or higher which means levelling up two characters in order to heal one. 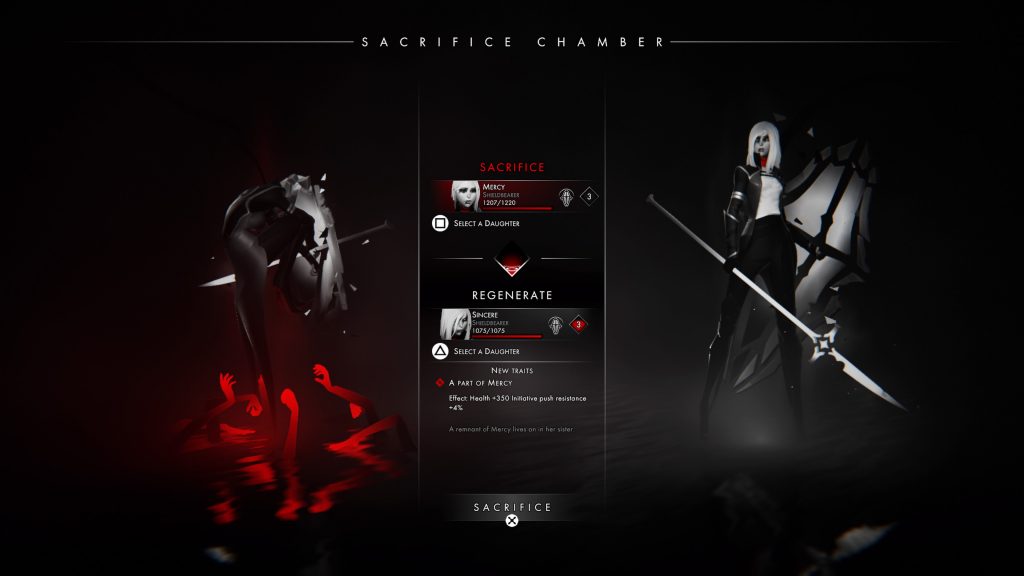 It magnifies the main issue with Othercide and that is repetition. Being a rogue-like you expect it to a degree but even within the same run the repetition rears its head. There are four types of mission (though I’ve found the Hunt type to be by far the most common) to choose from but as you’d imagine they’re all based around battling and the map variety is very poor. The levels aren’t randomised so if you choose a level of the same difficulty twice in a row there’s an incredibly high chance you’ll get the same level with the same enemy types and spawn points again. Good for mastering levels, not great for variety’s sake. Certain attacks also cost a percentage of your HP to use but since health is so difficult to come by you tend to just use the same couple of AP costing attacks until you need to use the more interesting ones for the bosses. Skill descriptions can also be a little confusing, so you may not use them due to simply not understanding them.

There a seven days per Era, with five Eras altogether and a boss appears on the fourth day. They can be fought on any day from then on but will force a fight on the seventh. Before then you’ll be given a selection of missions to tackle each day and each Daughter can only do one mission a day before needing a rest. If you only have one squad then that can be six missions to strengthen before the boss, but if you want to heal up before then then you’ll need a second squad too, doubling however many missions you do to ensure they’re the same level. You’re then also building up characters not to use, but just to use as a health pack which doesn’t exactly get you invested in them. Maybe that isn’t the best way to approach things but it seems the most logical. 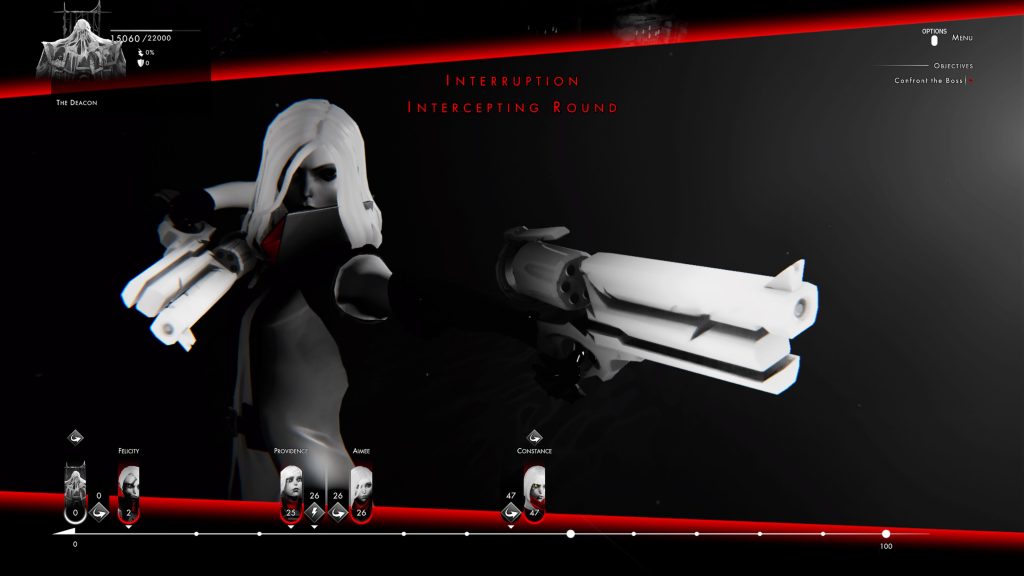 Similarly on a design front although the visuals are initially striking and I do really like the enemy designs and the boss designs especially, the Daughters all look very similar. Their hair can be slightly different but all being black and white with a red scarf means you only really identify them by their weapons, of which there are three for some time before a fourth unlocks. They all serve a purpose, with tanks and support and the like but if you lined all my characters up and asked me which was the highest level character I’d used the most I’d have no idea whereas I can picture the Ranger class character from my first XCOM 2 run from years ago quite clearly.

If your team does wipe (which it probably will on a boss as they have their own unique abilities that you have to learn through experimentation and experience) then Othercide‘s more caring side comes out. Yes you start again but as you play you’ll unlock Remembrances and the means to buy them (shards). These can boost your character’s HP or attack or can let your newly born Daughters spawn at a higher level and even skip bosses you’ve already beaten. You tend to have plenty of shards to buy basically everything so although you have to ‘start over’ you’re actually stronger and you don’t have to repeat it all again. Weirdly generous for a game that doesn’t let you heal by any traditional means, but welcome. 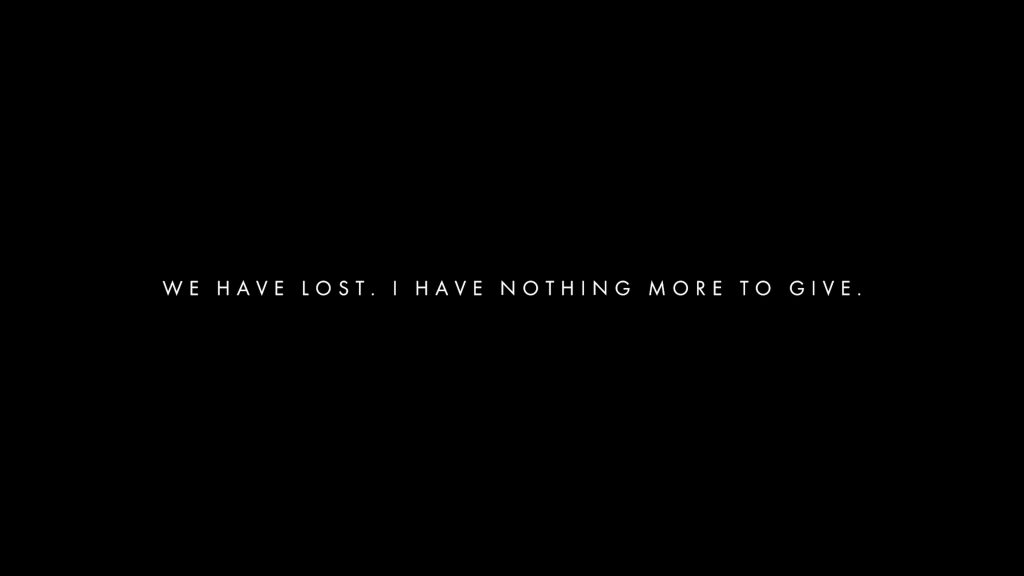 I really want to love Othercide, but I only like it. It sometimes gives me the same feelings that the best rogue-likes do but you have to wade through other elements in order to get there. The bosses are a difficulty spike, though still a highlight, but you have to go through the slog of the levels before hand that become a bit of a formality after a while. A little more, fair, randomness would go a long way into keeping it fresh but as it is the ideas are sound but the content runs thin very quickly.

Fans of tactical games who don’t mind a rogue-like should check it out though as it does have its own identity and ideas which differentiate it from the crowd. It’s just a shame that the bulk of the game lacks variety but I do hope Othercide gets a following as I would love to see some expert level runs through the game in the future.

Othercide
7 Overall
Pros
+ The combat system makes you think
+ Some great enemy designs
+ Bosses are a rewarding challenge
Cons
- Too repetitive
- Some of the skill text is difficult to understand
- Daughters aren't distinct enough
Summary
Othercide brings some great ideas to the table to differentiate it from similar titles. Unfortunately what content is here gets repetetive quite quickly. It does have its moments, such as the boss battles, so fans of the genre should give it a try.