Lost Wing is a… well, what actually is it?  It looks like a shoot ’em up of sorts and you do fire bullets but this is more of an avoid ’em up in the style of games like Race The Sun, Infinity Runner and Air Race Speed and it comes from Manchester-based coders Boxfrog (albeit ported by Spanish company 2Awesome).

There’s no plot to speak of and instead the game gets right to it with a tutorial that explains the game’s simple controls.  This is essentially a game where you fly along a track, into the screen, and have to shoot, dodge or jump over threats that are in your way.  These are generally a handful of different types of obstacle and these are used to create randomly generated levels.

The only quirk to the game’s mechanics are in the ‘charge’ system.  Shooting your gun and triggering slow-motion will use up charge but you can gain more by either boosting using R2 (the idea being that the game is harder the quicker you are going) or by picking up charge orbs.  You could feasibly just travel at the default, rather slow, speed but the levels are pretty long (around ten minutes) before you get to their bosses and so that’d get boring pretty quickly. 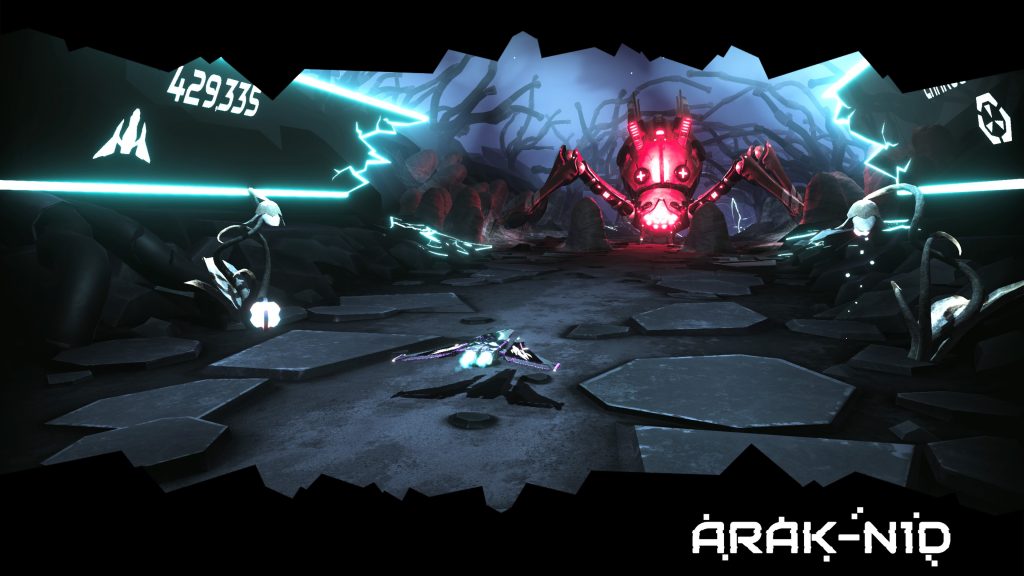 Also, shooting obstacles grants you points and while those don’t mean very much while you are playing, at the end of a go they do get converted into XP which is used to level you up.  This in turn unlocks new ships (and skins) and subsequent stages of which there are just three.  You do also unlock variations on the core gameplay mode, adding boss rushes, score-based modes and so on.

When you get into the core gameplay, it’s actually pretty enjoyable.  We liked those games quoted up there in the first paragraph and this offers much the same experience where it is all about progress and less about the shooting.  You fly along the tunnel, avoiding things, crashing occasionally and it’s all quite slick and addictive.  This is due in part to your own failures being entirely your fault (always the key ingredient in anything addictive) and while the levels can initially feel pretty long, it doesn’t feel like a chore to get right back into them when you hit the Game Over screen.

You do get three lives and the game is pretty generous in that glancing blows will only compromise your ship but not kill you outright.  That’s where the name Lost Wing comes in.  Many collisions will just take a wing, compromising your movement speed in that direction and severely limiting your maneuverability.  Thankfully, it won’t be too long before a pick-up restores you back to your original condition.  Other pick-ups will shrink or grow your ship, add a smart bomb or flip the screen (which essentially flips your controls), which is something of a nuisance but reasonably short-lived.  That said, when it ends a good run, it can be absolutely infuriating. 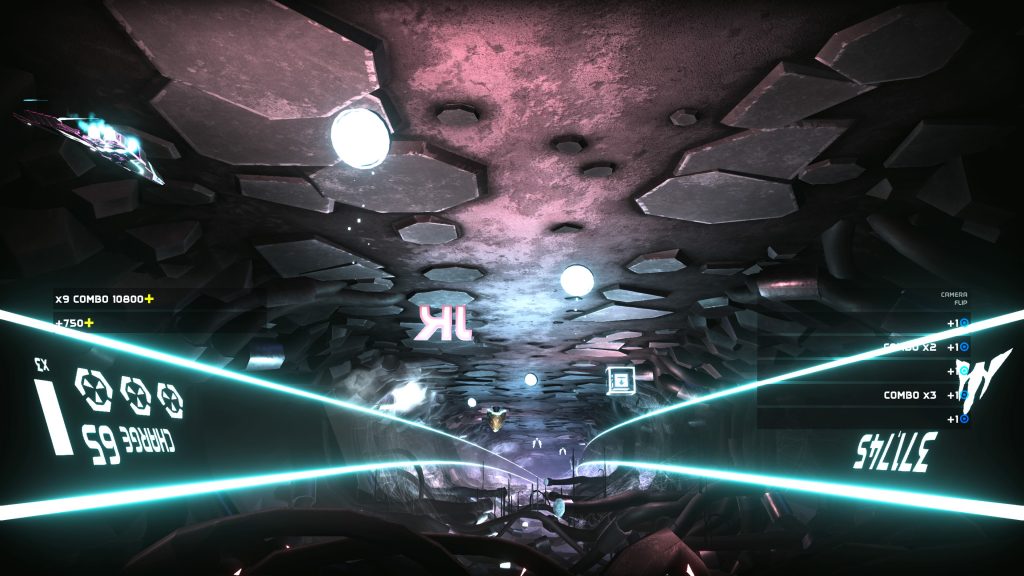 Aside from that, the bosses are all that is left to talk about.  They are a bit of a nuisance too, frankly.  Targeting them can be tricky, as can figuring out how best to damage them.  We found out that keeping your speed up helps, but we weren’t entirely sure why.  It was just the difference between success and failure (on the first boss at least).

It’s all quite enjoyable and slickly presented with some nice futuristic, clean visuals that lean a little towards the more minimalist Race The Sun rather than giving us a deliciously colourful Rez-type experience.  The three stages (Industrial, Forest and Canyon) all look reasonably different and come with different obstacles to worry about but the game isn’t packed with visual diversity.  One massive concern at the point of launch is that while the opening Industrial level feels smooth to play, the other two suffer from a subtle, repetitive lurching effect as if something is causing the frame rate to drop on a set interval.  It doesn’t make things unplayable but it does make it less enjoyable for sure.  We expect that to get patched out but for now it does speak to a lack of extensive playtesting which is the curse of this generation of indie ports. 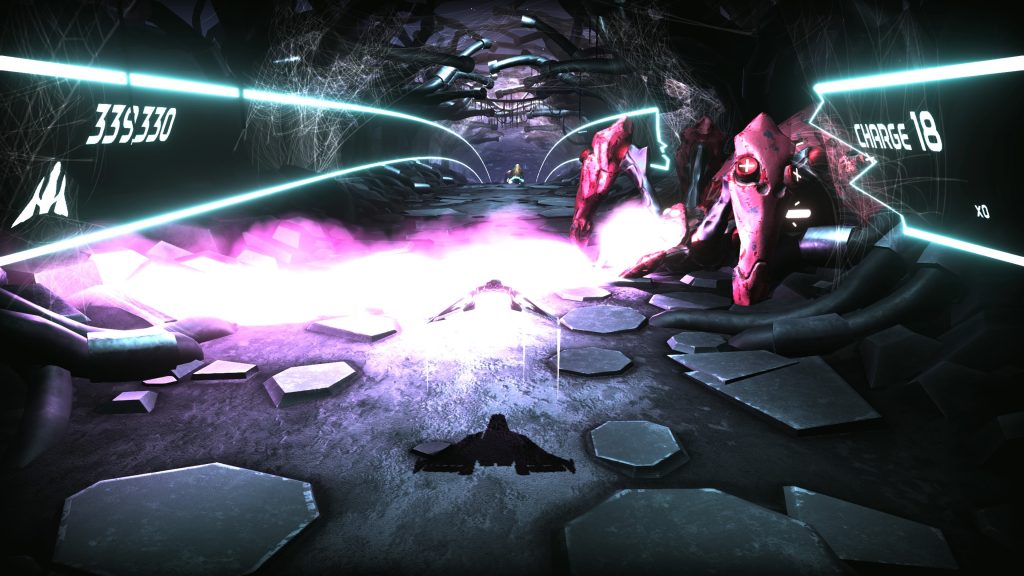 The same could be said for the game’s menu which adds too many buttons for what you are trying to do and loops the options within so that if you pass your option you have to go through a bunch more to get back to where you need to be.  Again, it’s not a huge problem but it just feels a little unsuitable for gamepad control.  Speaking of which, we wouldn’t have minded an option to redefine your controls, especially as the two shoulder buttons are linked to switching music tracks when they would be better suited as options for shooting and jumping.

The music is kind of what you’d expect with everything fitting into a vague EDM bracket.  That said, we’d have preferred the tunes to be more in your face and pumping rather than what we get here which is a little to experimental and ambient.  It’s good stuff in its own right but we’re not sure it compliments the action perfectly.  That said, it’s not intrusive and so it’s not really a problem. 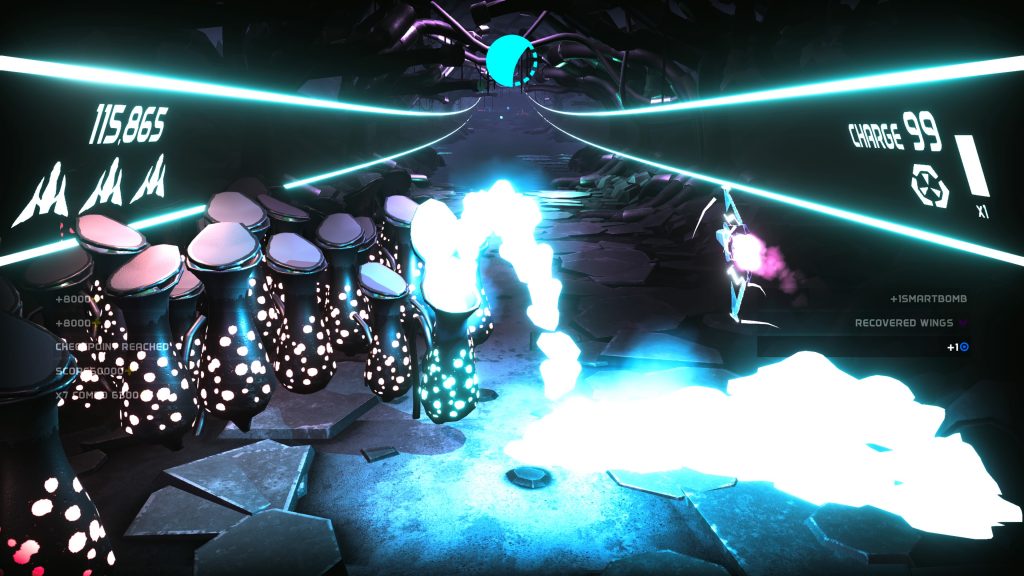 So, all in all this isn’t a game that is brimming with fresh ideas but it is one that is pretty good and won’t disappoint players who like this sort of thing.  We’d have liked more levels, especially if they were a tad shorter, and we could do without the boss battles.  There’s also a degree of grind as you have to replay levels a bit to get the XP to unlock the next ones but that wasn’t a problem as we kept dying on the first boss and had unlocked the second level by the time we finally beat it.

But equally the gameplay is tight and enjoyable, the presentation is pretty good and the sub-tenner price makes it a lot easier to recommend.  Lost Wing might not be a game that you remember forever (indeed it could learn from Race The Sun‘s trick of patching in PSVR support) but it’ll do for now if you’re looking for a solid indie game to play.

Lost Wing
7 Overall
Pros
+ Good core gameplay
+ Slick presentation that adds a bit of quality
+ Reasonably good controls
+ Very addictive
Cons
- Not much variation
- Minor performance issues
- UI isn't great
- Levels are a tad too long
- Getting new content requires some grinding
Summary
Lost Wing is a decent into-the-screen avoid 'em up that looks slick and cultivates a real 'just one more go' addictiveness. Minor niggles around performance and variety spoil the party a little but at this price it is easy to forgive any small failings it has.