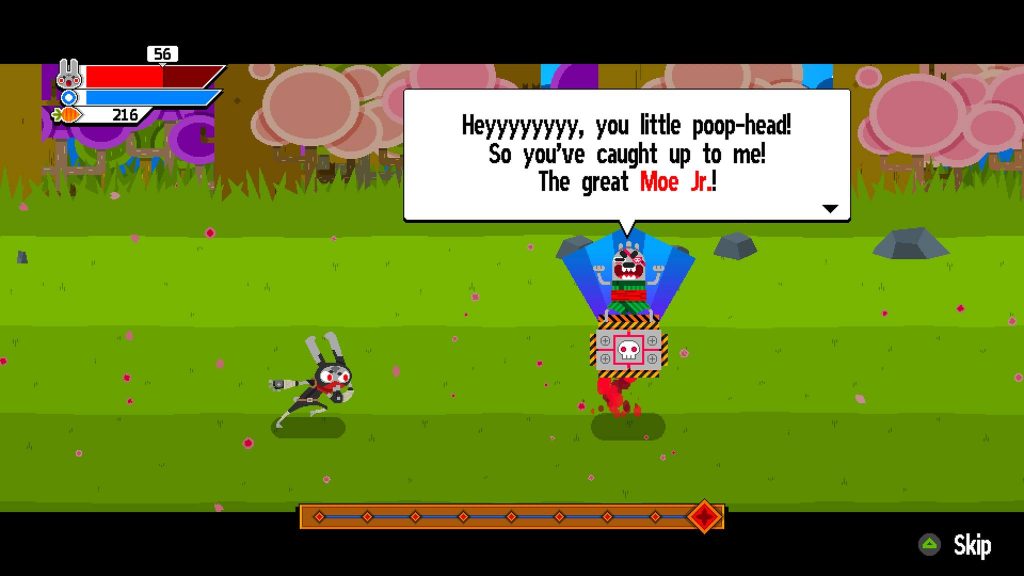 It’s no secret that smashing retro gameplay styles together and mixing these with nostalgia baiting pixel graphics is a popular means for indie devs to express themselves. It’s been a common trend to that point that if you searched for the word “pixel” in the search bar of this very site, you will find more than seven pages of results. To cut a long story short, Ninjin: Clash of Carrots is one of those games, but this time it’s part bullet hell/ part scrolling beat-em-up.

Ninjin is the second game in a series, with the first game launching back in 2013 on mobile platforms. The game feel will be somewhat familiar from the off as the gameplay is fast paced, pocket sized and very easy to get into. You play as one of the two characters; a rabbit or a fox that both happen to be Ninjas as they run into battle and slice at enemies in their path. The game is a scrolling beat-em-up at the core, with enemies appearing in waves of differing types and sizes. The bullet hell mechanic comes from just how much of these dangers that Ninjin throws at you. While not overly numerous, there are a fair amount of projectiles, enemy patterns and types to contend with and the progressive difficulty is laced with intense spikes at times. 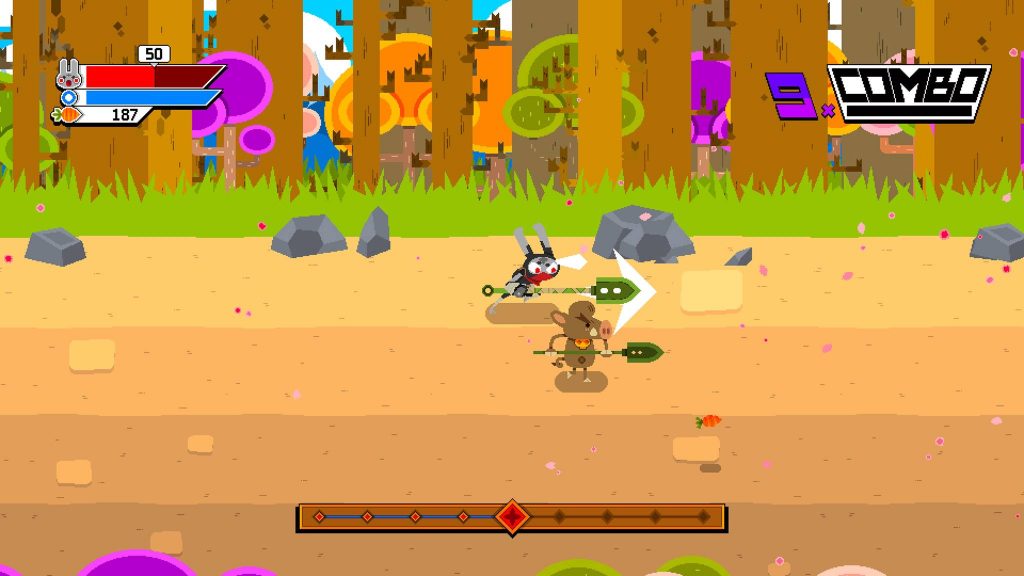 At first, the game does a good job of introducing the core concepts and types of enemies that you encounter. Each are drip fed with their own cutscenes and a single wave that pits you against a single version of the creature to introduce its mechanics. Further waves increase the ante and introduce more of the same, then mixing previously introduced foes together to create more diverse patterns. By the end of the first round of waves you will have encountered creatures with fixed roaming patterns, bomb dropping caltrop throwers and walls of spear wielding warthogs that are out to ruin your day.

The problem, is that beyond these enemy types there isn’t an awful lot of variety. The problem lies with the fact that the majority of the game is played on a constantly scrolling plane and there is simply a finite amount of things you can do with that. Aside from enemy patterns, the only way the game can offset this is with the gearing system that provides a variety of weaponry that you can use to make your time a bit easier. These are purchased with the carrots that you collect from fallen foes and carrot carts that appear periodically. These weapons do help, but mainly with the aforementioned difficulty spikes, as they can be earned even when a level is failed and the ones I earned in particular seem to be ready made to the particular levels that I had problems with. I’m not sure if that was entirely intended however, it could well have been a happy coincidence as there is also an in-game shop which suggests that level duration drops are otherwise randomised. 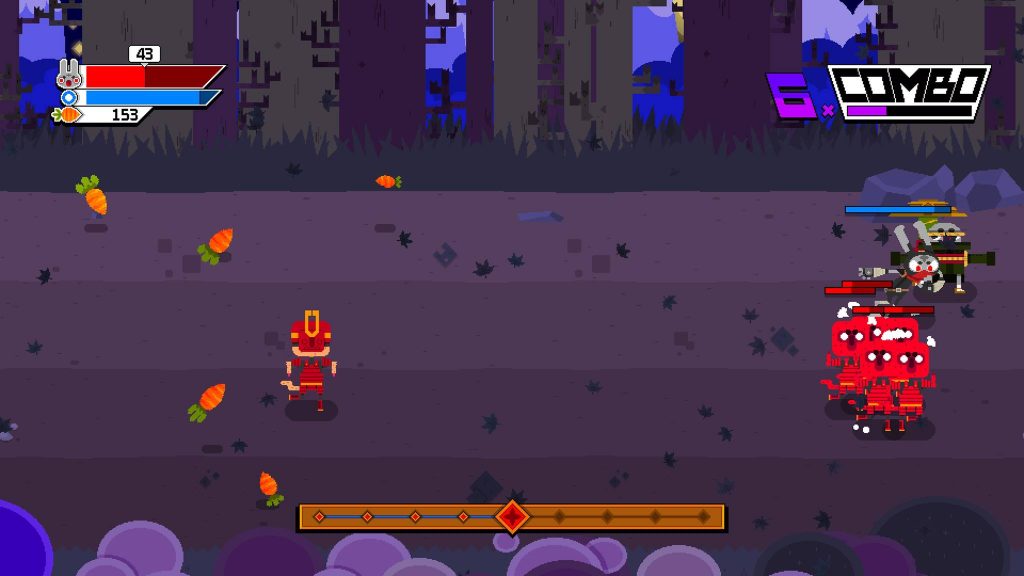 Another aspect that muddies the waters is the somewhat floaty controls. The Rabbit or fox you play as feel somewhat inconsistent in their movements and can often feel like they are running on ice at times. This is okay to a degree as the game doesn’t require exact precision, however it can be frustrating at times when dealing with boss creatures and when you are shoehorned into confined fighting spaces. The soundtrack is a contentious subject as well, considering that you will mostly be listening to the one jingle throughout, which is an aspect that is at odds with the otherwise great presentation.

While it is not entirely unrecommendable, Ninjin: Clash of Carrots leaves much to be desired and it doesn’t take long for the initially fresh gameplay mix to outstay its welcome. It seems to me that the game should have stayed within the confines of a mobile platform as opposed to a TV connected console like the PS4. It’s far more enjoyable in short bursts as opposed to longer stints of play.

Ninjin: Clash of Carrots
6 Overall
Pros
+ Good looking pixel-based visuals
+ The comedy has its moments
+ Gear acquisition system means that failed levels don’t become roadblocks
+ Fundamentally solid gameplay
Cons
- Incredibly repetitive in both soundtrack and playstyle
- Controls need to be tighter, can feel floaty
- Steep difficulty spikes that feel manufactured to be frustrating
Summary
Ninjin: Clash of Carrots is a superb looking game that has an initially fun gameplay loop with the mixture of bullet hell mechanics and scrolling beat-em-ups. Unfortunately, the cracks appear when you hit the midway point and realise that there are no more tricks left and all that is left is repetition and unspent potential.