Divinity: Original Sin 2 came out on PC a year ago but an enhanced version has just been released on PS4 called Divinty: Original Sin 2 – Definitive Edition. The incredibly well received old-school style, isometric RPG has been reworked to function with a controller and it’s really, really good. 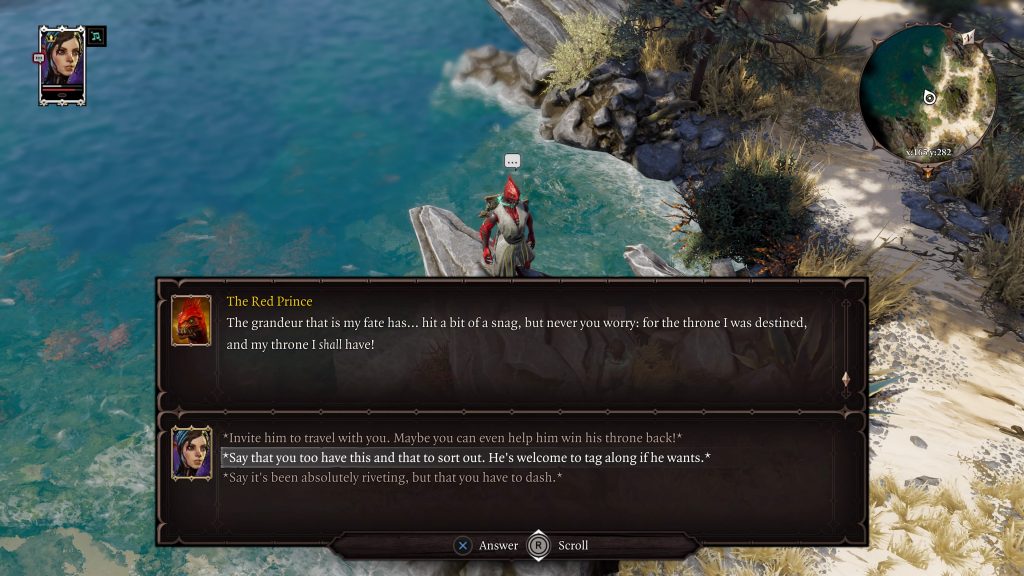 It can be a bit overwhelming at first, as you’re allowed to pick or create a character. There are six pre-made characters to begin with, who each have backstories giving them a goal beyond the main story arc. They’re all interesting in their own right so picking one can be tough. You can also create your own character from scratch if you choose and even if you pick a pre-made character you can then customise their appearance, stats and skills before you start. How you build your character will make things easier or harder as you play through the game, with the difficulty you choose making things more difficult or pretty much impossible if you mess up your build.

However it’s this flexibility with the character builds that, despite being an incredibly long RPG, will allow you to replay it over and over again. As well as all the mixing and matching of skills and classes you can choose whether to take on the adventure alone or have a group of up to four people on the journey, made up of the characters you didn’t choose at the beginning. This means you can see the majority of their story as they accompany you. Although whoever you chose initially will be the leader you can take control of anyone in your party and different people will have different conversations, based on race, background or if you’ve put stats into things like Persuasion.

You all meet on a prisoner ship. Each character is a Sourcerer, someone who has the ability to control Source for magic purposes. Sourcerers are now being rounded up by the Divine Order and taken to Fort Joy where they’re being ‘cured’ as it is believed Voidwoken, monsters and demons effectively, are being drawn from the Void to our dimension by Source users. Beginning the game with a power dampening Source-collar on, you must first escape and then see where your adventure takes you. As I mentioned each character has an underlying plot of their own as well. Sibelle is an elf who was controlled by her master through a scar on her cheek and now wants revenge for all the terrible things he made her do. Fane is an Eternal who wants to find out what happened to the rest of his race, whilst learning about the world as it is now. Lohse is a human performer whose mind is infested with demons, sometimes being overwhelmed by them. She wants her mind back. 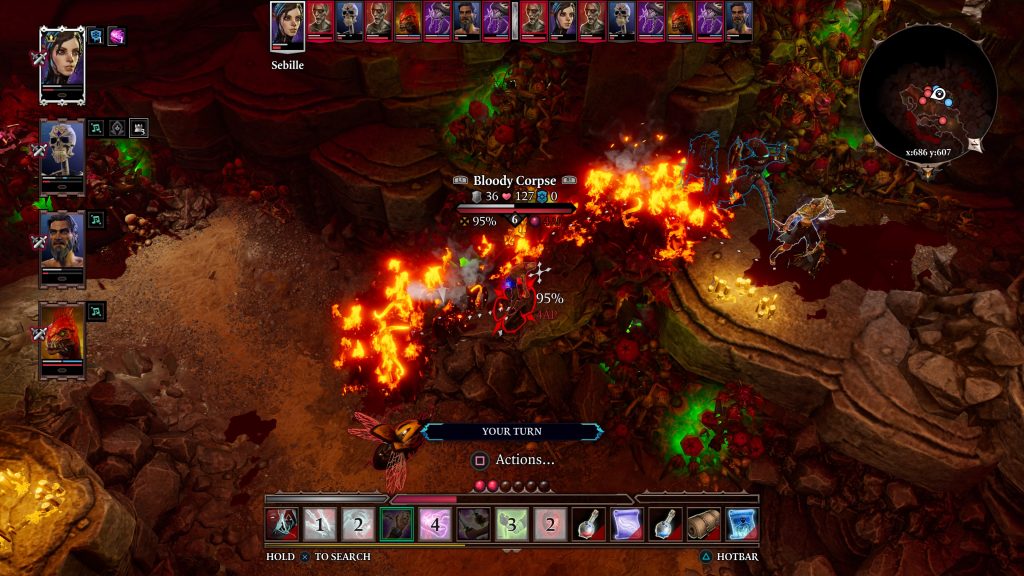 The Red Prince, Beast and Ifan Ben-Mezd round out your choices and when you choose them to accompany you they’ll ask what sort of warrior you want them to be and you have full control over their stats as they level up and what skills you want them to learn. Again this is important as having a team (if you go that route) that compliments one another and works well together makes all the difference in battle.

Battles are turn based with each character having a certain amount of Action Points to use on each turn. Moving will use AP, the further you move the more it costs, and each action will take a certain amount of AP. If you end your turn without using all your AP it will carry over to your next turn. Maximising the damage you’re doing with the AP you have is the key to victory, though clever positioning and tactics will help you survive as well. Original Sin 2 is a tough game, until you get a grasp of the mechanics you will be punished and you will die (saving often is a very good idea), with a dead character staying dead until you use a quite rare Resurrection Scroll to bring them back in most cases.

If you know a battle is coming you can split up your team and set them up in advantageous positions, like giving an archer high ground for a damage bonus, or prepare the battlefield to make use of the potent elemental effects you can use, such as putting oil down to slow advancing enemies, which you can then set alight to create a wall of flame. That does require some prior knowledge and there were quite a few fights that I had to repeat over and over again until I found a tactic that worked, though as I progressed through the game and my characters gained more skills and I became more experienced getting stuck became far less of an issue. 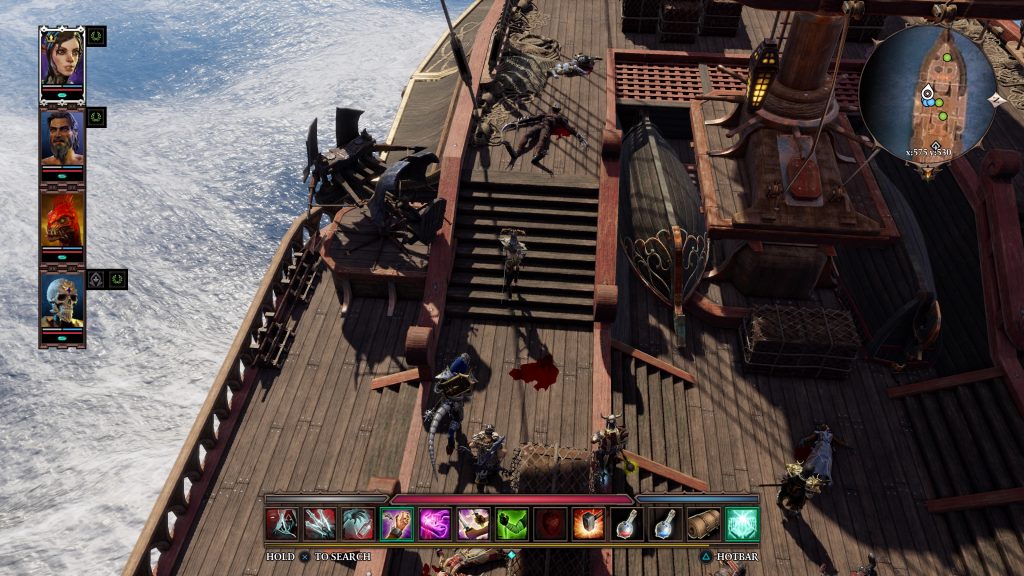 You don’t always have to fight however, as with the character development you have lots of options as you explore each area. You can start fights unnecessarily for experience and the hope of loot, you can avoid fights if you say the right thing in conversations and you can find lots and lots of side quests which will also have multiple ways to complete them. As there is so much ground to cover and each person is generally worth speaking to you will spend lots of time in the same areas before exhausting everything, if that’s how you decide to play it, which may be seen as a slow burn by some but I appreciate the amount of content packed into each area.

The move to controller is generally very good as you explore, with movement on the left stick but there are times when you want to inspect something specific and trying to get the game to recognise that can be tough. With a click of L3 you can effectively control a mouse pointer which works but isn’t the most elegant solution. In general though, apart from a few extra button presses here and there the controller usage is solid causing few issues in the long run.

Presentation across the board is excellent too, with fantastic music, writing, voice acting (every line is voice acted, including a Dungeon Master style Narrator) and the visuals are very pleasing too. Not as detailed and complex as some AAA games but when viewed from the distance it is it is far from an ugly game. It’s a game that is very difficult to fault in pretty much all regards.

You can also play the entire game in co-op if you like. There’s split screen two player or a full four player party online. I can’t imagine doing that personally, both because of the length of the game and giving up control of characters, but it’s a welcome edition that will be a great way to play through for those inclined to do so. There’s also an arena for PvP battles if you want to test yourself against another human. 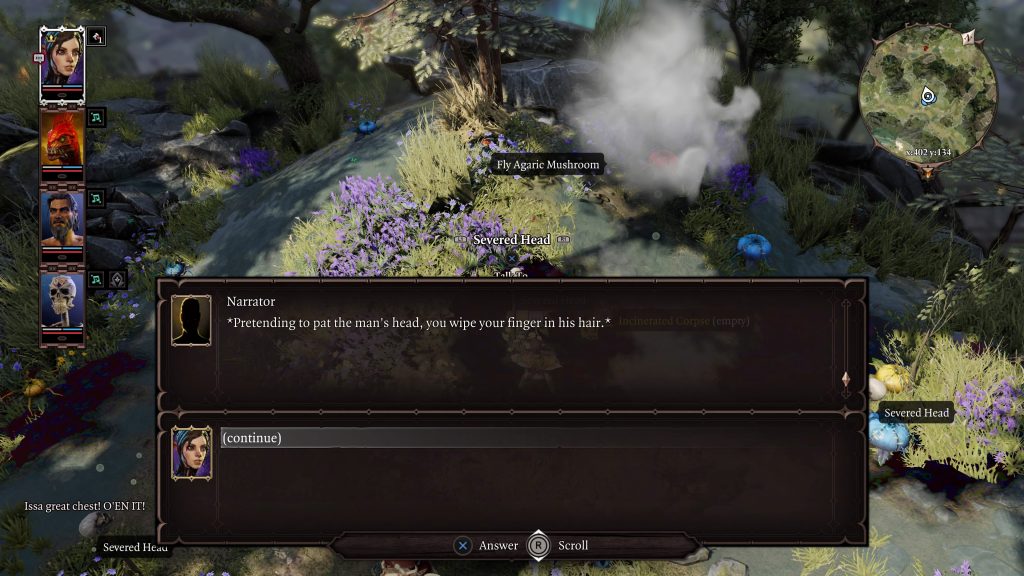 If Divinity: Original Sin 2 – Definitive Edition was released twenty years ago then I could see my teenage self playing it non-stop, over and over, to the point of obsession. For better or worse that’s not possible for me any more, but I can’t help but appreciate both the quality and quantity Larian Studios have managed to squeeze into this package. The initial complexity might scare off CRPG virgins but anyone who gives this title a chance will struggle not to get drawn in, no matter how you choose to play it.

Divinity: Original Sin 2 - Definitive Edition
9 Overall
Pros
+ So much content
+ Quality presentation is every regard
+ Player choice is key
+ Co-op if you want it
Cons
- Some trial and error
- Controller isn't the ideal way to play
Summary
Divinity: Original Sin 2 - Definitive Edition is an expertly crafted CRPG that has survived the port to console nigh on perfectly. The amount of player choice in every facet of gameplay is superb and the amount of content, combined with the replayability, could easily keep you busy for hundreds of hours.