Arc Systems and French Bread have been producing anime fighters for years and it was only a matter of time before Under Night In-Birth:Exe Late[st] was given a complete package for the Playstation 4. Whilst not boasting a new coat of paint, there’s hope this ambitious fighter can find new challengers on the current consoles. How does it stack up? 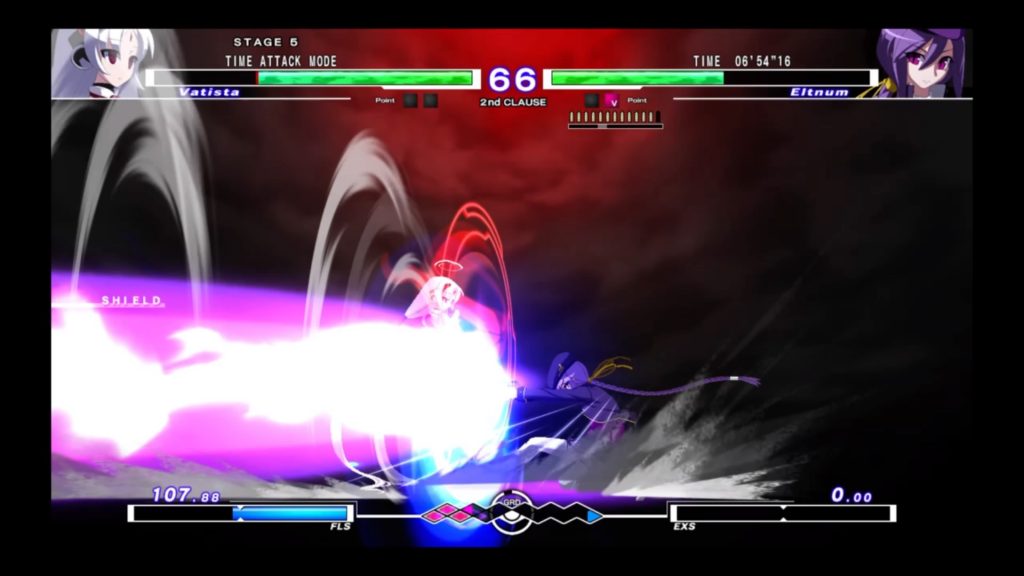 One of the problems levelled at the original release was how hard it was for new players to get a grip on the game’s more interesting systems. The extensive tutorial does go some way to rectifying that. I found it informative, although still needed to refer to outside resources to fill in some of the blanks. At least it provides you a practice area where your hand is held firmly until you finally make your mark. It does seem to be making me a better player, little by little.

Single player content is relatively broad with tutorial mode complimented by time and score attack modes. Mission mode allows you to concentrate on specific combo challenges and the survival mode is the gauntlet you can expect. There’s five difficulties to choose from with the default setting proving something of a cakewalk for a scrub like me. The top difficulty provides ample challenge with the game punishing a player’s mistakes. It’s not perfect and does seem to prefer certain combo strings but it can give you a tough opponent.

The traditional arcade mode is a brief, ten bout excursion that allows you to experiment with new fighters. It’s a shame the story behind them is a bit of a nonsense. Hyde and Linne act as your protagonists and, after being attacked by shadows, they’ve awoken the power of an in-birth. This grants them the power to fight so they duly oblige. Visual novel portraits and text push the narrative along but it’s a touch forgettable and not presented in a hugely appealing way. 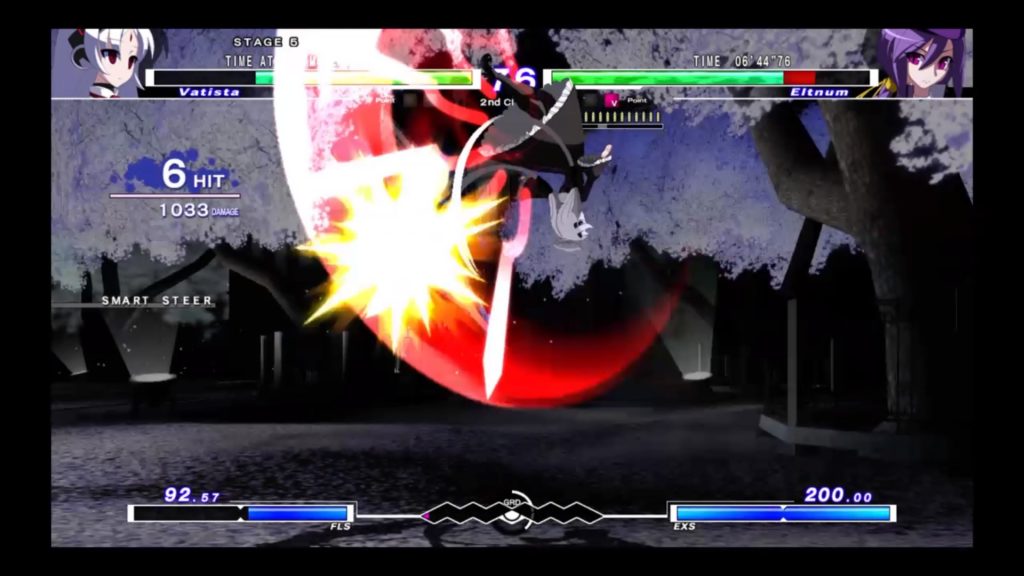 The roster, at first glance, seems fairly balanced. There’s some real brutes combined with nimble slashers. Some provide great range and projectile attacks. I like Marakava’s range but his attack speed is slow enough to be caught out. He’s an early favourite of mine but finding out how other characters work is half the fun. There’s a diversity here that makes for intriguing match-ups.

Animation feels snappy and sudden and stage backgrounds seem somewhat lifeless. Given how the action flows and explodes, you’ll probably not pay much attention to them. The character models and portraits have a fair bit of individuality to them. It’s a fairly well-travelled anime art style but it’s still pleasing enough on the eye. It does appear dated with some corners being cut. The lack of cutscenes do hurt the story mode with each one concluding with a piece of artwork and credits.

Music remains enjoyable, even if it does wander into a mix of J-Rock and electronic beats that can produce the odd memorable track. 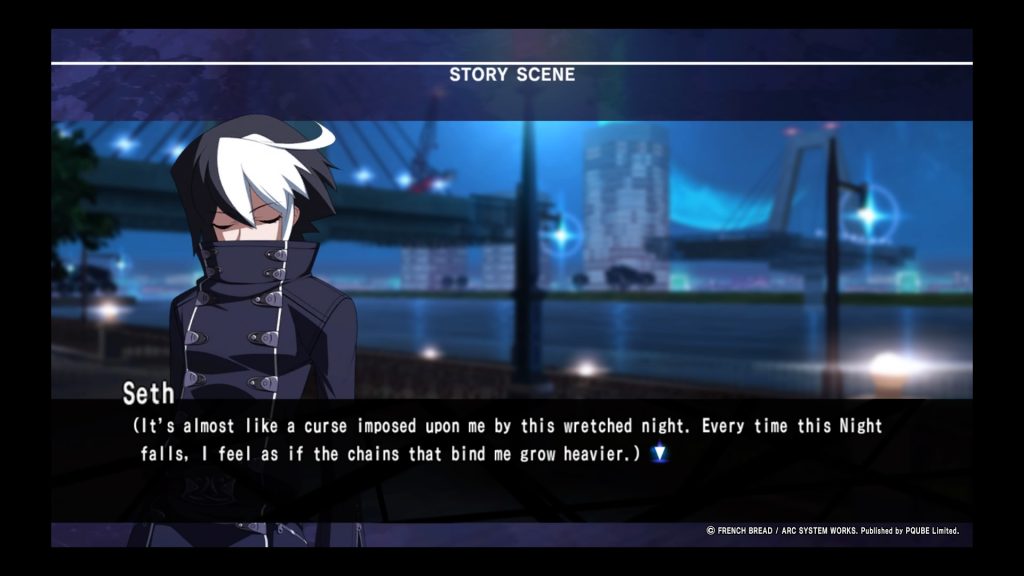 Fighting in Under Night In-Birth:Exe Late[st] involves quite a few systems unique to the series. The GRD system rewards aggression with players gaining it when they move closer to their opponent. The game takes stock regularly of who has the upper hand but you can choose to cash in early if you think it’s worth your while. Doing so gains you an additional attack buff which, provided your opponent is open, can reap rewards. This then leads to the EXS meter which can be spent on special moves at a reduced meter cost. It can be confusing but having these systems bleed into each other does allow for switches in momentum and some really frantic encounters. It goes deeper and, when it clicks, you find a lot of options are at your disposal.

It makes for a frantic, flashy encounter where you’re trying to balance your offence with smart, timed defence. Whilst the systems at play might be overbearing, it does help present a deep fighter that allows for a lot of experimentation. Bouts can turn so swiftly but being in control and perfecting the many mechanics makes practice very gratifying. 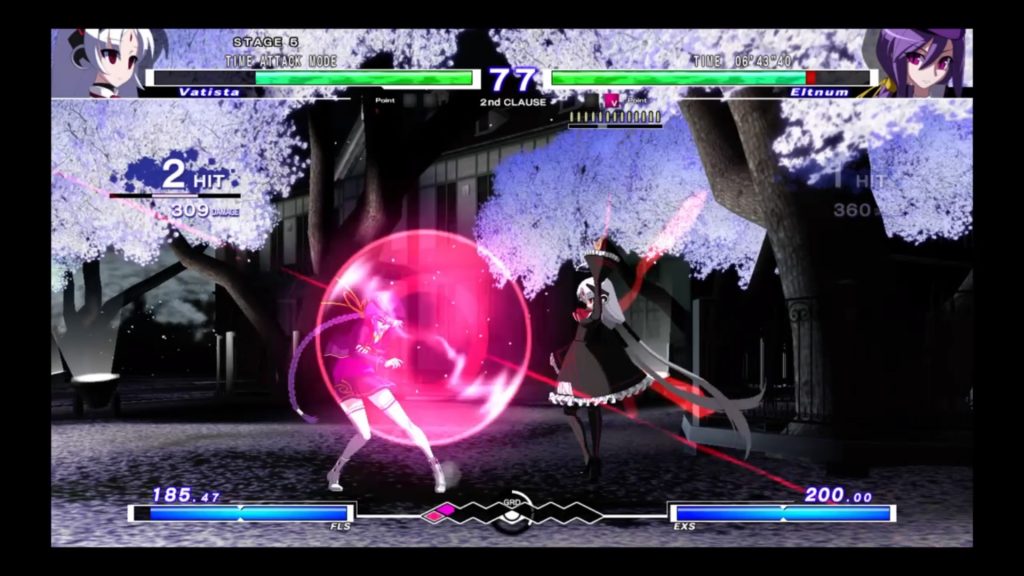 Judging the strength of the online community is a little tough ahead of release. The matches I have found have been sparse but the netcode’s been solid and performed well. I did find plenty of players on my first couple of nights with it but they did refuse a ranked match with me. Hopefully this will become less of a problem as this game becomes available in Europe and the US in a few weeks. Online modes seem basic with only ranked and unranked options available. You can set lobbies of up to six players and tweak matchmaking to your liking. In the past, Under Night In Birth Exe Latest has been fascinating to watch competitively. I do hope that continues.

As a package, Under Night In-Birth:Exe Late[st] has a lot to offer those that want a deep and interesting challenge. The varied roster and multiple mechanics allow for a lot of experimentation and the fights are often entertaining. The combat itself is presented well and easy enough to follow. It’s a shame the presentation of the story seems so light and the online community seems spread so thin. It’s a game that’s fascinating and enjoyable with human opposition.

Under Night In-Birth:Exe Late[st]
7 Overall
Pros
+ Enjoyable, deep fighting mechanics.
+ A diverse roster of combatants.
+ An extensive tutorial helps introduce newcomers.
+ Plenty of single-player content.
Cons
- You'll still need outside resources to plug the gaps in your knowledge.
- Visually dated with some bland stage art.
- Online is functional but slim on modes.
Summary
Under Night In-Birth:Exe Late[st] is a game showing its age but the complexity of its systems continue to shine. A diverse roster should hopefully be complimented by a burgeoning online community. As it is, there's plenty of single-player content, even if the AI is a touch predictable. There's a likeable game at the heart of this with enjoyable combat. I just wish more was put into the presentation.