About a month ago we reviewed the Vita port of Papers, Please, a game where you work a seemingly simple job but are put in the uncomfortable position of carrying out the government’s orders even at the cost of what appear to be ordinary, innocent people. Beholder: Complete Edition feels like it’s cut from the same cloth, although the gameplay is quite different. 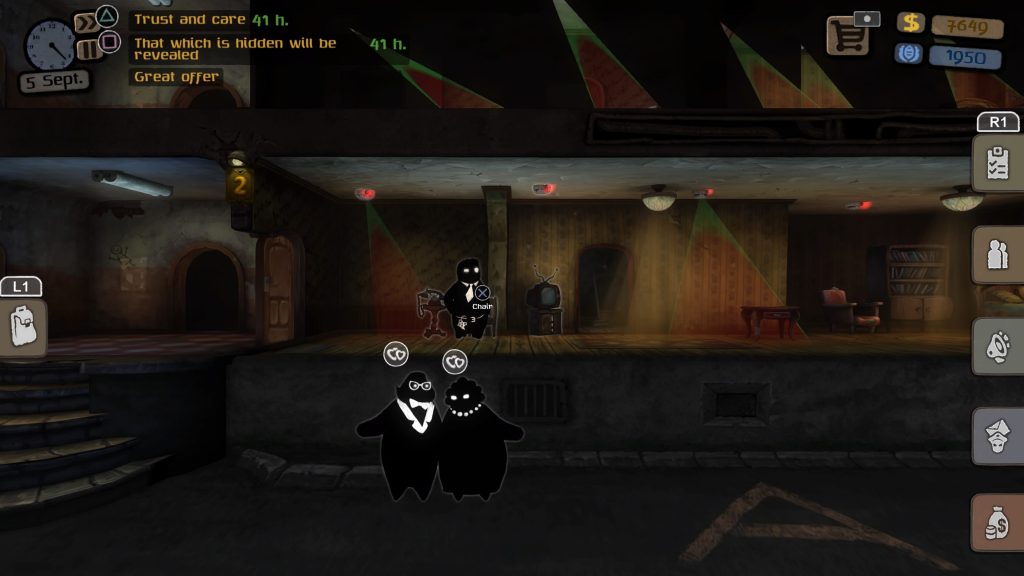 You play as Carl, a newly appointed manager at an apartment. As you arrive the old manager, obviously beaten, is being taken away by police due to not living up to the government’s standards. Carl and his family – wife Anna, son Patrick and daughter Martha – move into the basement and Carl must manage the residents in the rooms above. He has been drugged so doesn’t require sleep, he must simply do as the ‘Ministry’ tells him. Generally speaking this means spying on the residents.

You view a cross-section of the house with the basement housing your living quarters, a room for reporting crimes and receiving phone calls, a communal kitchen and wash room. Above ground are six rooms which are either occupied or empty, depending on where you are in the story or how you’ve treated the tenants. You can move Carl around each floor, talking to people he encounters or interacting with objects. When the residents leave their rooms, whether to have some food or go to work, you can enter them with your master key to start rummaging through their belongings.

The Ministry wants profiles on everybody and will pay you for the amount of information you acquire. Find a chess set and you can assume the resident likes chess, dumbbells implies they work out or tobacco gives away that they’re a smoker. More important, to the government at least, is if anyone commits any crimes. You can install cameras in the rooms to keep an eye on them but illegal objects can also be reported. As the game progresses the list of crimes grows and includes such oddities as owning jeans, fish or reading. Catch anyone with these things and you know what to do. 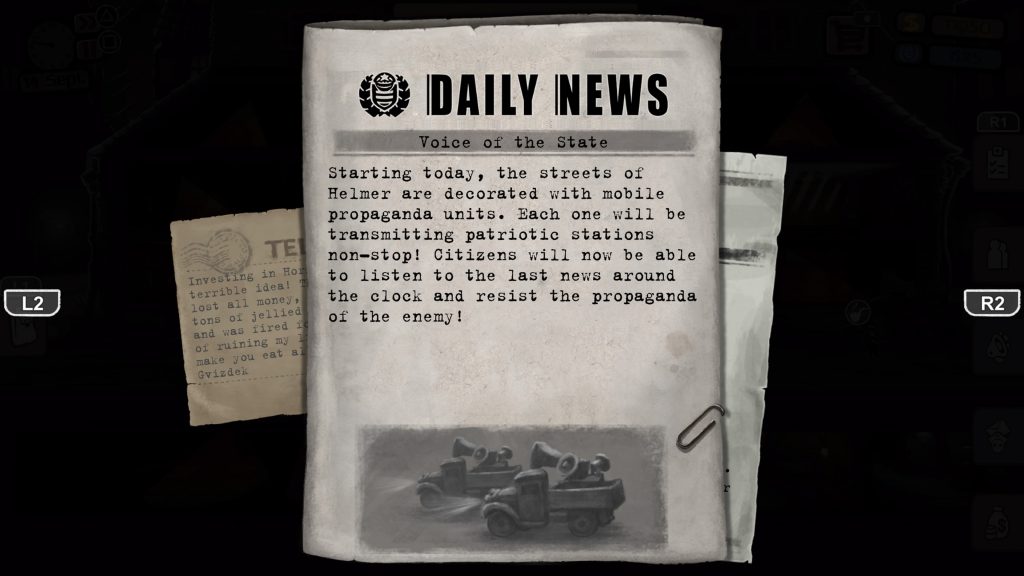 Or do you? Reading that small list you probably think those are quite ridiculous laws and so do the people of this fictional country. Maybe you will let it slide, after all you’ve come to know these people a little through the quests they’ve asked for your help with and they seem nice enough. Maybe you’re hard up for cash and so will bribe them or maybe a crime is a crime and you’ll just report them and they’ll be arrested and you’ll have an empty room for someone else to move into.

There are a lot of choices to make in Beholder, if the Ministry asks you to remove someone do you evict them, possibly planting an illegal item in their room and framing them? Do you talk to them and help them find a way out, possibly through another resident’s connections? The eventual outcome is the same, an empty room, but there are a few methods to go about it. Also a friendlier approach won’t necessarily guarantee a happy ending, Beholder is pretty bleak.

The toughest challenge will be keeping your family happy which basically equates to money. Your son attends University and needs books and money for tuition fees or he’ll be kicked out and sent to work in the mines. Your daughter is sickly and needs medicine. These fees add up to a hefty amount which I struggled to achieve being a nice guy. I helped every resident I could, didn’t report crimes but it didn’t bring in the green. Bribing is the best way of gaining money, whether they’ve done something illegal or you’ve simply planted something and although initially you won’t feel good about it you’ll quickly adjust and just see it as a gameplay mechanic, which is a shame. 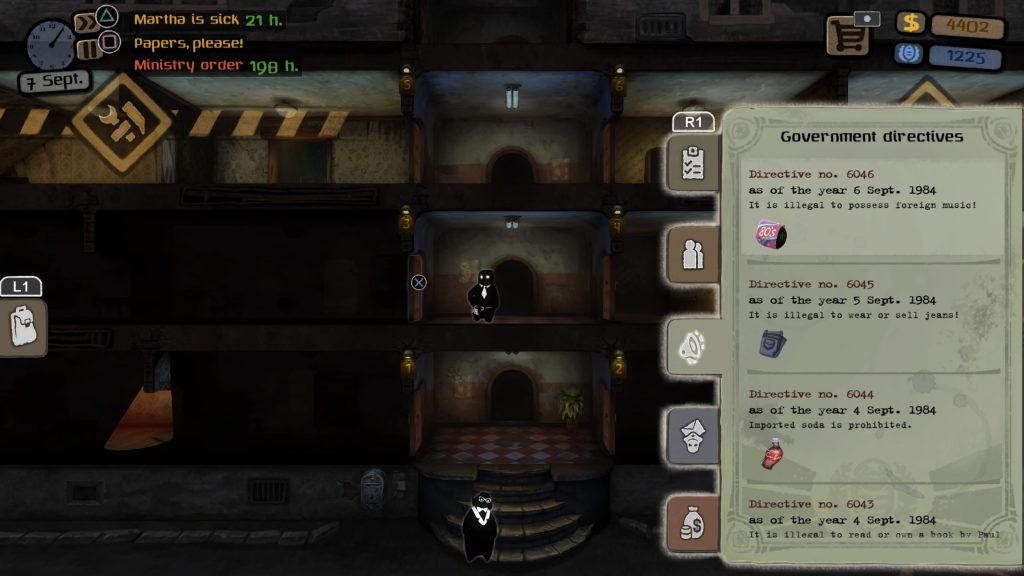 After my initial failure I tried again from the beginning and had to play through the same intro again. Although there is choice Beholder is a linear game. The same residents will be there in the beginning, the same residents will move in at the same points, although the amount of choice allows for multiple playthroughs with many endings the gameplay is not particularly fun to replay. You can’t manually save to create a strong position to start mid way from, you have to rely on the autosave which holds a lot of save slots but will only update every time you progress in a quest, not at timed intervals so late on when I was struggling for funds to complete quests the game simply refused to save and I ended up losing half an hour’s gameplay.

That first playthrough is enjoyable though. The visual style is strong, being both attractive and depressing at the same time. Characters are almost featureless but are easily recognisable and their designs show personality. The music reacts to what is happening, with the approach or police bringing with it a dread inducing tune, whilst getting caught in someone’s room is startling thanks to the accompanying sound.

There are a couple of difficulties which affect how much money you receive, the normal difficulty being much, much stricter than the easier one. Chances are either way you’ll be relying on those autosaves as things can go drastically wrong for Carl, with death or arrest both looming over him at times if you annoy the wrong person or make the wrong choice. There are a lot of outcomes, both mid game and at the end which is commendable, it’s just a shame you have to go through the motions every time. 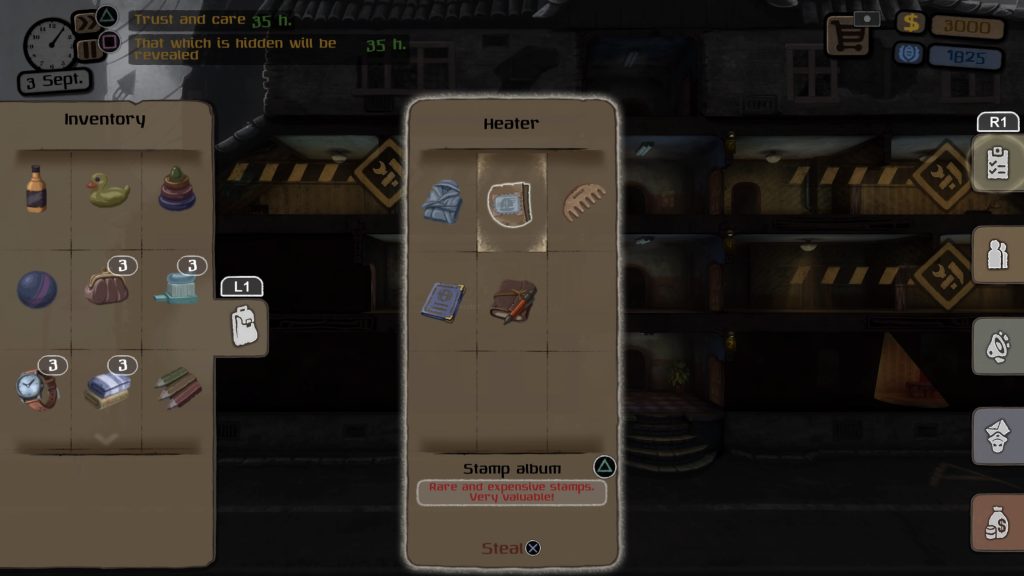 This Complete Edition also comes with the Blissful Sleep DLC, which has you playing as a different character though doing much the same stuff. It’s welcome for those that want more and it’s no doubt that this will appeal to a certain gamer. The atmosphere is strong and that initial playthrough, feeling out the mechanics and seeing how far you can push them, is fun. Beyond that though I found the slow start to be a huge hurdle to seeing everything the game had to offer.

Beholder: Complete Edition
6 Overall
Pros
+ Strong style
+ A lot of choices as to how things progress
+ Feeling out the mechanics is fun
Cons
- The stuff between the choices is overly repetitive
- No manual save
- Some control issues
Summary
Beholder: Complete Edition initially impresses with its strong style and theme. The challenge and multiple choices, although welcome, require you to repeat the same actions to get to those interesting moments and if you want to succeed the game forces your hand to play a certain way. A great concept that stutters slightly on the execution.