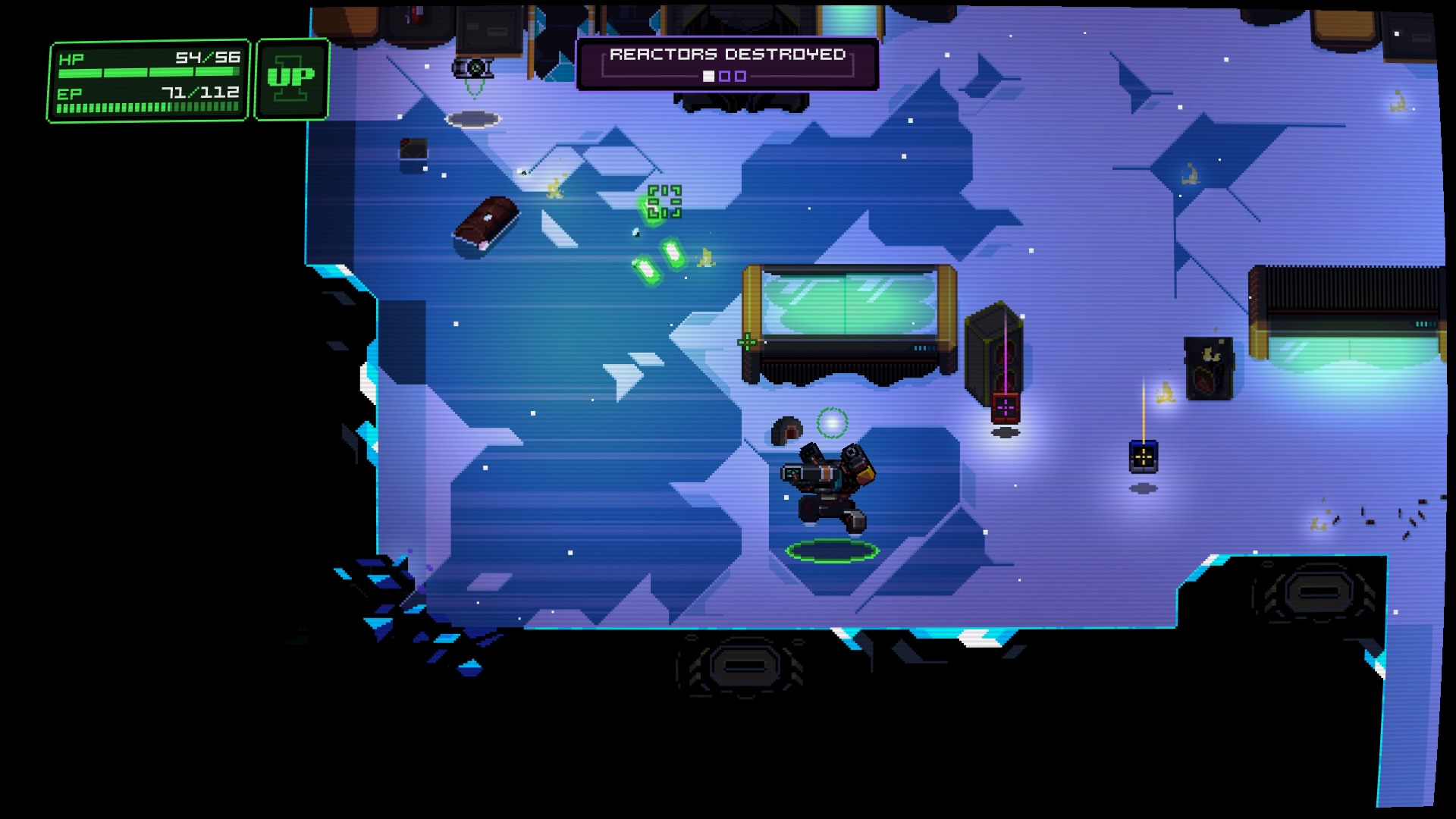 Having recently rediscovered Neon Chrome, a cyberpunk twin-stick shooter roguelike that sees you taking on level after level of robotic enemies punctuated by occasional boss battles and plenty of opportunities to upgrade your offensive and defensive capabilities, it figured that basically the exact same thing would come along again and that’s what NeuroVoider is.

The game’s tutorial explains it at all.  You are a brain that bursts out of the glass tube holding it and bounces its way over to a mech (so you’re basically that Krang thing from the Turtles cartoon).  And now I’ve explained it all. 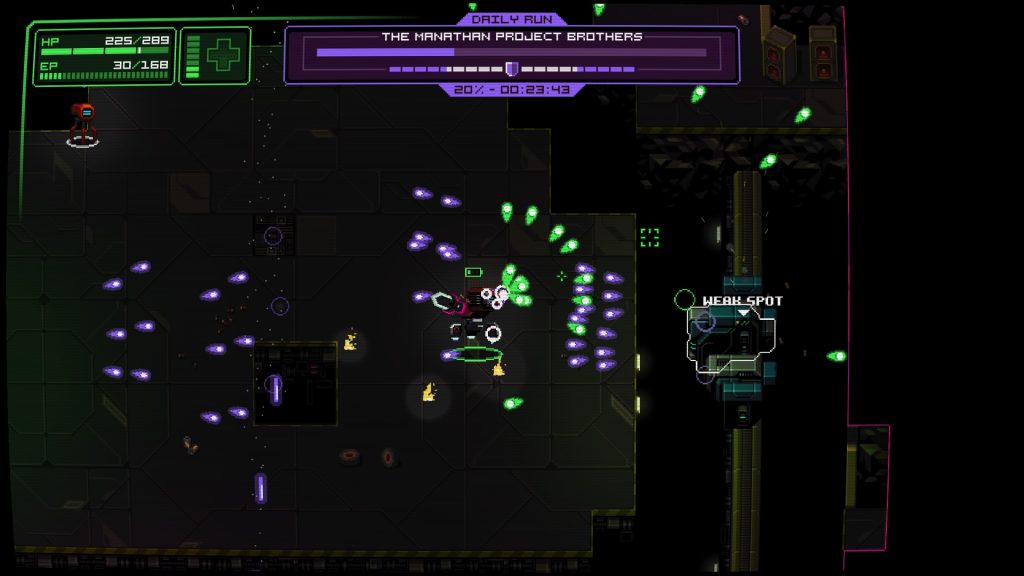 The aim of the game, if the first paragraph didn’t give it away, is to clear each level on a mission to get through the game.  In your way are a lot of enemies.  They charge at you, they shoot you but most of all they’ll crowd you.  To survive you need to choose your mech (there are three classes, each focused on either close combat, ranged or defense) and start blasting in the typical twin stick fashion.  You have two weapon slots, each mapped to a trigger, a class-specific power and a selectable other power.  These other powers range from increased offense, speed bonuses, improved loot and healing abilities.  There are loads more but go with healing.  Obviously.

At first the game seems achingly basic.  The old-school graphics are okay but we’re a bit done with scanlines and all that and the combat seems a little stilted compared to Neon Chrome.  However, with roguelites/likes you need to dig deeper.  The start of any playthrough is where you, and your enemies, are the weakest level.  However, after completing a level you are given the option to apply any new equipment you’ve found. 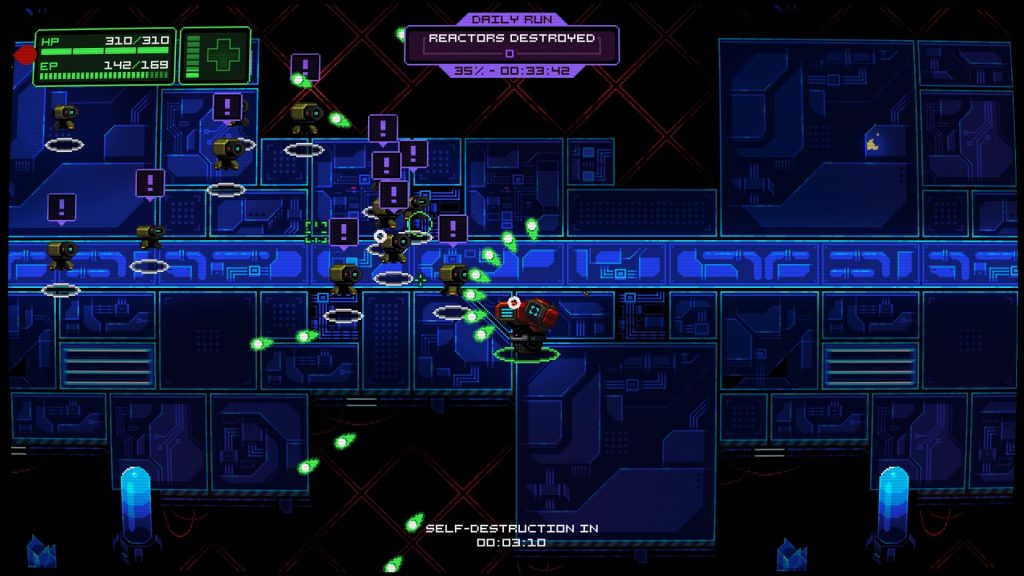 Body modifications affect your hit points, your weapon energy and speed while new weapons can be equipped to either weapon slot.  You can scrap what you don’t need and can even upgrade what you keep.  The system works well and soon you’ll feel like a dominator as you slice through levels with your upgraded kit.  However, constantly checking your loot between levels does slow things down a little.  The progress is pretty constant though and that’s the key to a good loot-based game.  NeuroVoider gets the balance right.

The progress you make when you have a good run is as enjoyable as any decent roguelike.  There’s that addictive quality that shines through, especially as deaths tend to be fair but will creep up on you if you aren’t diligent about monitoring your health and checking your Rambo-esque instincts.  It’s always your fault when you die though and you’ll know it.

Of course, when you die that’s it.  Back to the start, back to the rubbish starter weapons.   After a really good run it can be difficult to do it all again.  It’s a trapping of the genre but is very much in evidence here.  However, you’ll soon get over that when you start making progress again. 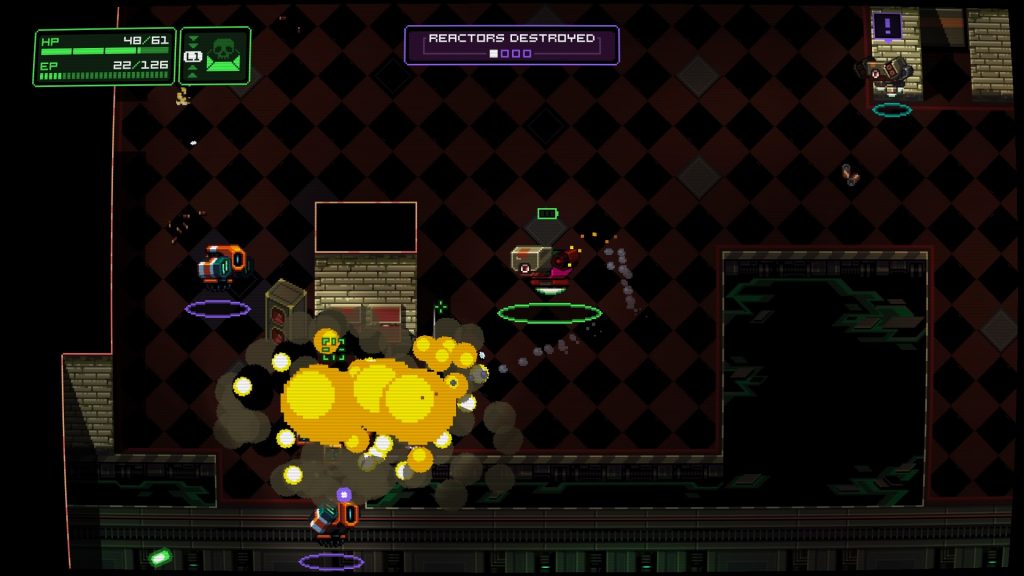 The game also supports four-player co-op.  Offline only (boo!) but it’s there if you need it.  And the competitive players out there get to test themselves against the daily challenge leaderboards.

As mentioned before, the presentation is all a bit retro.  Isn’t everything these days?  Luckily the lovely dark synth music evokes those old VHS memories and it does all create a relatively pleasing effect even if it is all a bit familiar.  However, the visuals never get in the way of the action and the action is pretty good.  A little hectic, a tad too clunky but overall this is a good game.  It won’t be displacing Neon Chrome as my Blade Runner ’em up of choice but I can see myself coming back to NeuroVoider a lot.  There’s just something too enjoyable about upgrading a laser and using it to cut through robots like butter.

NeuroVoider
7 Overall
Pros
+ Okay twin-stick shooting
+ Excellent loot progression
+ Quality soundtrack
+ Four player local co-op
Cons
- Another retro-flavoured rogue-like
- Motivating yourself for a fresh playthrough can be a struggle
- Action is a bit clunky
- You spend as much time comparing loot as you do shooting
Summary
NeuroVoider isn't going to stand out in a sea of retro-flavoured roguelikes but it's one of the better ones. While the shooting mechanics aren't perfected, the upgrade system is pretty addictive and makes a fairly ordinary game hard to put down.