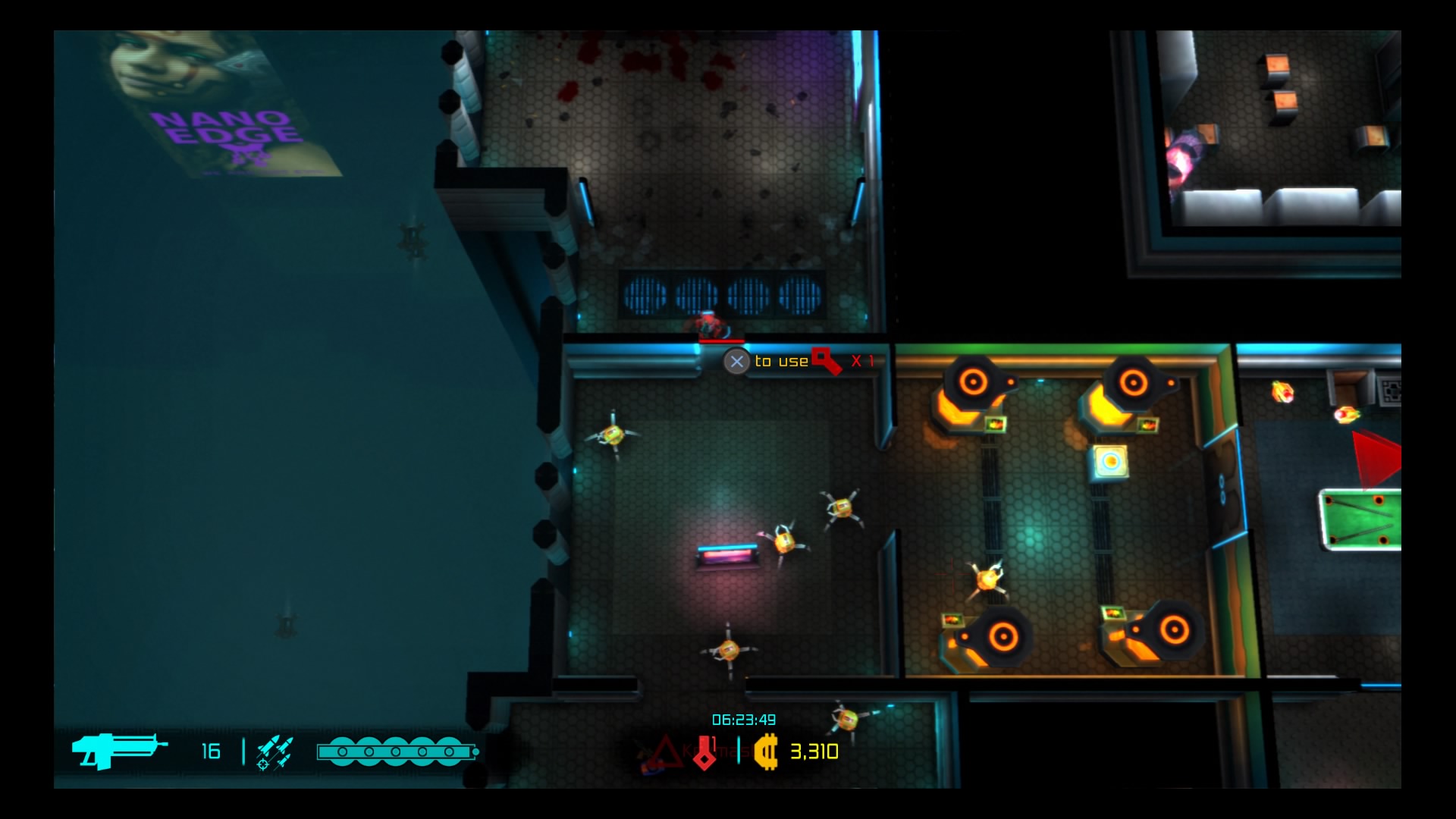 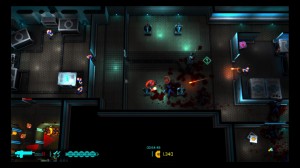 We’ve always had a soft spot for 10Tons Ltd but their PS4 output has generally been simple games that seem designed for mobile devices.  Titles such as Baseball Riot and Tennis in the Face were enjoyable enough but Neon  Chrome represents a significant upgrade in terms of ambition and presentation.  Neon Chrome mixes a kind of Blade Runner aesthetic with top-down roguelike gameplay and sees you storming your way through a tower (similar to a Mega-Block from the Judge Dredd comics).

Thirty or so floors filled with angry soldiers, killer robots and big bosses face you and death comes very easily at first.  However, each time you play, you’ll collect money and money can be used to upgrade you.  The good news is that these upgrades are permanent and, much like Rogue Legacy, this means even a run where you eat a bag of dicks is still going to be a step in the right direction.

In fact, when it comes to its Roguelike game, Neon Chrome is full of decent decisions.  When you begin a game you’ll start in an area where you can buy upgrades (health, damage, luck and so on), one-shot abilities and new weapons.  It’s all quite nice (although the price of upgrading does keep rising) and keeps the addictiveness high.  You then plug into a Matrix-style chair and wake up in a new body (with a choice of classes such as the combat-focused soldier class, the sneaky assassin or the excellent hacker who is good for making cash).  It’s all quite stylish and well-considered and shows you right away that this isn’t a throwaway indie title at all. 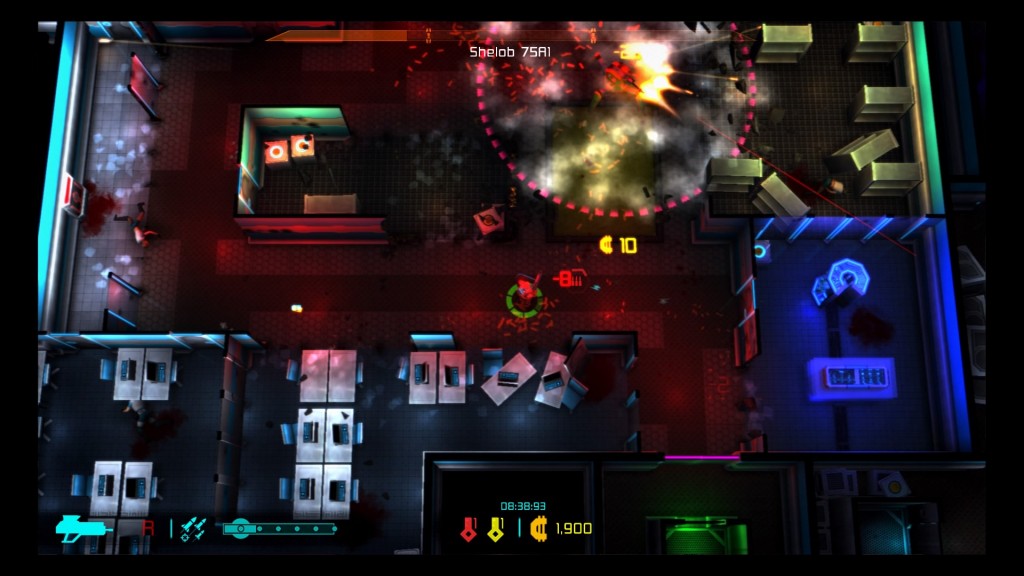 The in-game action is constant.  The game plays like a standard twin-sticker and gives you a little opportunity for stealth but for the most part you be blasting away and retreating when the enemies start to charge you.  Completing levels is usually a case of finding the exit (usually behind one or two colour-coded card key doors) or destroying a certain number of er… orange things.  To be honest, it’s hard to tell sometimes as the game is big on its PlayStation 1 aesthetic and if you’ve ever played Loaded, you know what to expect.  Darkened rooms and corridors highlighted with stabs of purple and other neon colours.  It takes a little getting used to but the effect is okay.  Not that the game couldn’t use a bit more polish but it looks pretty good for a budget indie title.

The ’80s synth soundtrack completes the dystopian picture perfectly.  Neon Chrome feels like a homage to ’80s sci-fi and ’80s gameplay and it works.  It echoes the likes of Syndicate and Blood Dragon (albeit without that game’s gimmicky humour) which is no bad thing.  The Roguelike stuff is good and gives you lots of options (as well as giving you a reason to keep playing on) and new level starting points are unlocked as you go along, again adding to the sense of progression (although you’ll be better of eschewing those options as a long run will earn you plenty of cash and some handy upgrades for that particular playthrough. 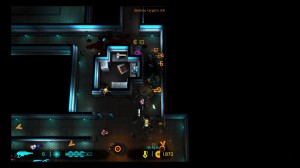 There are downsides though.  Firstly, the game is tough.  The progress may be constant but you’ll still be getting your arse handed to you on the early levels even with a few upgrades in the bank.  Also, there’s not a ton of variation to the game.  The levels seem to be randomly generated which I’m not a fan of either.  These elements all combine to make the game a little less fun than it maybe could be.  A top down Rogue Legacy rival would be a great thing but Neon Chrome doesn’t quite get things as perfectly right as that game did, mainly down to the fact that it knows very well just how hard it is.

But it’s far from being a stinker either.  There’s good action here, addictive elements and any ’80s kids out there should love what they are trying to do even if Neon Chrome doesn’t elevate itself in a genre that is now getting very over-crowded.  It’s definitely worth a look though.

Neon Chrome
7 Overall
Pros
+ Good Roguelike progression + Solid top-down shooting gameplay + Decent cyberpunk aesthetic
Cons
- Is a little too tough to be actual fun - Gets repetitive - A bit too dark
Summary
Deliberately dark and brooding, Neon Chrome is a surprisingly well-polished roguelike with a decent Cyberpunk feel. However, the focus on grinding your way to success starts to get tiresome pretty quickly.