Neonwall is an arcade puzzle game from four-man Spanish indie coders Norain Games.  That term is usually used for anything from Tetris to Lemmings but it makes sense here as this game definitely has that arcade feel but it will also give your brain a workout too.

The premise of the game, one that carries on through the entirety of the game’s  one and one mode, is that you need to get a rolling ball from the start of the level all the way through to the end.  The ball rolls ever onwards, only going backwards if it bounces off of something.  Obstacles will get in the way and these have to be dealt with in various ways. 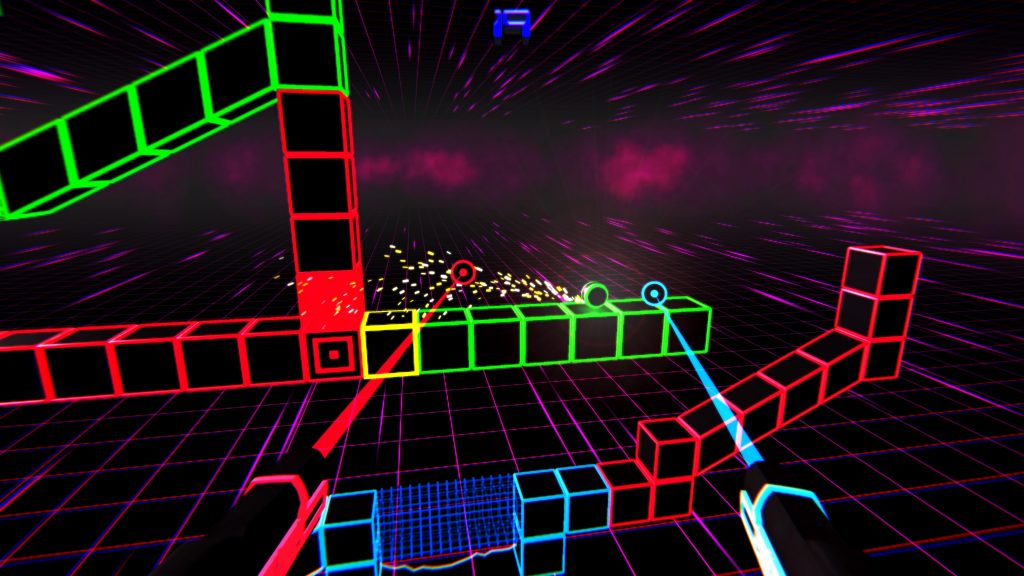 The initial gameplay mechanic revolves around colour.   The ball will be one of three colours (red, green and blue – although these are customisable in the main menu) and it rolls you can change the colour either using the shoulder buttons on a DualShock (if playing in non-VR mode) or the 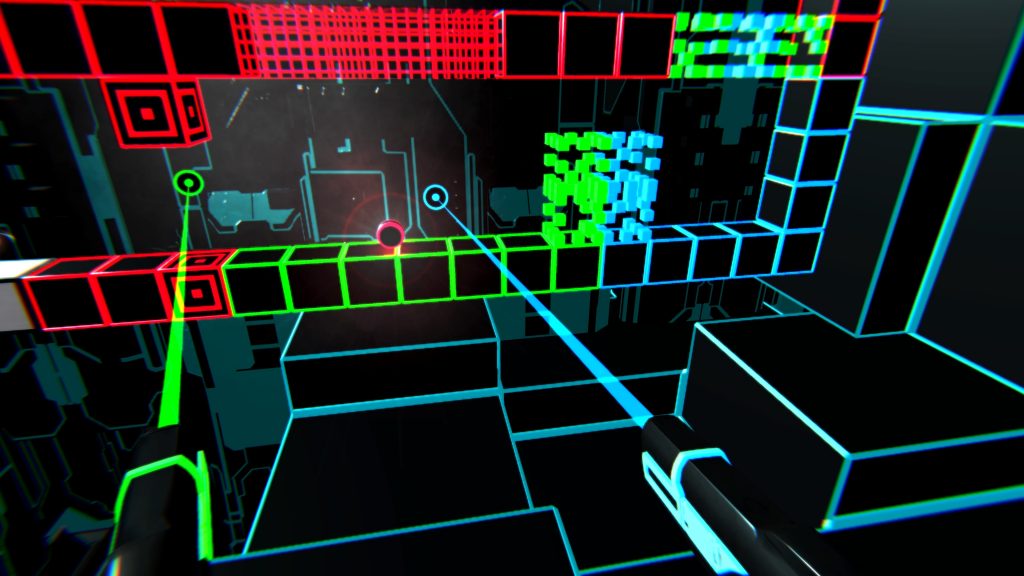 The game then brings in more gameplay mechanics such as plane-switching and, more immediately, shooting.  Certain obstacles can only be shot at (using the Move triggers or

).  If you’re using the DualShock you’ll be aiming with the analog sticks but with the Moves you just point and shoot.

The game starts off being pretty straightforward and the level requirements aren’t too bad whether they are puzzle levels (where you have a set number of lives and have to try not to lose your ball too many times), runner levels (where you are being chased) or time trials.  However, the game soon turns on you with level nine being a particularly tough son of a bitch and the game not laying off after that at all. 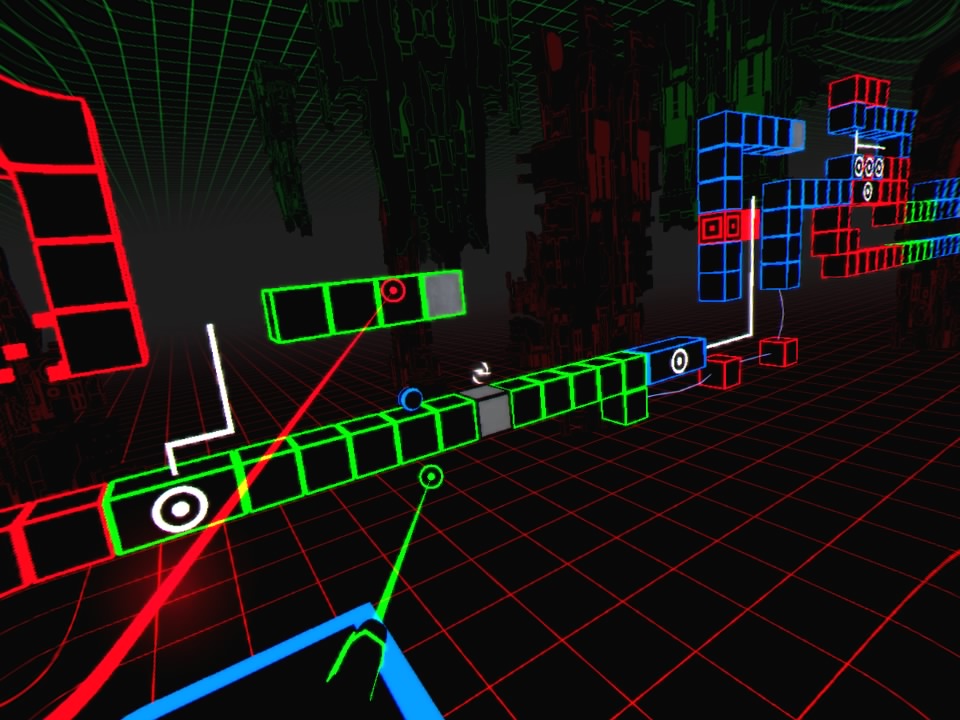 The levels get trickier requiring a lot of brain power as well getting close to demanding a bit of muscle memory from you as the need to switch colours and shoot out obstacles becomes harder.  You’ll also be dragging and dropping blocks around the level too which means they act as gates or even lifts.  Add to that that the levels start to get a lot longer and more convoluted in terms of their routes and the game goes from being quite interesting to straight up fiendish.  Gamers who like tough puzzle games will be catered for but people just looking to have fun might find themselves getting frustrated.

The controls aren’t bad but it can feel like you’re spinning plates at times, kind of like when you get one of those games where you’re controlling two players at once (like Brothers) and sometimes I found my performance on a difficult level was getting worse the more I played it.  We’re not going to mark a game down for difficulty though. 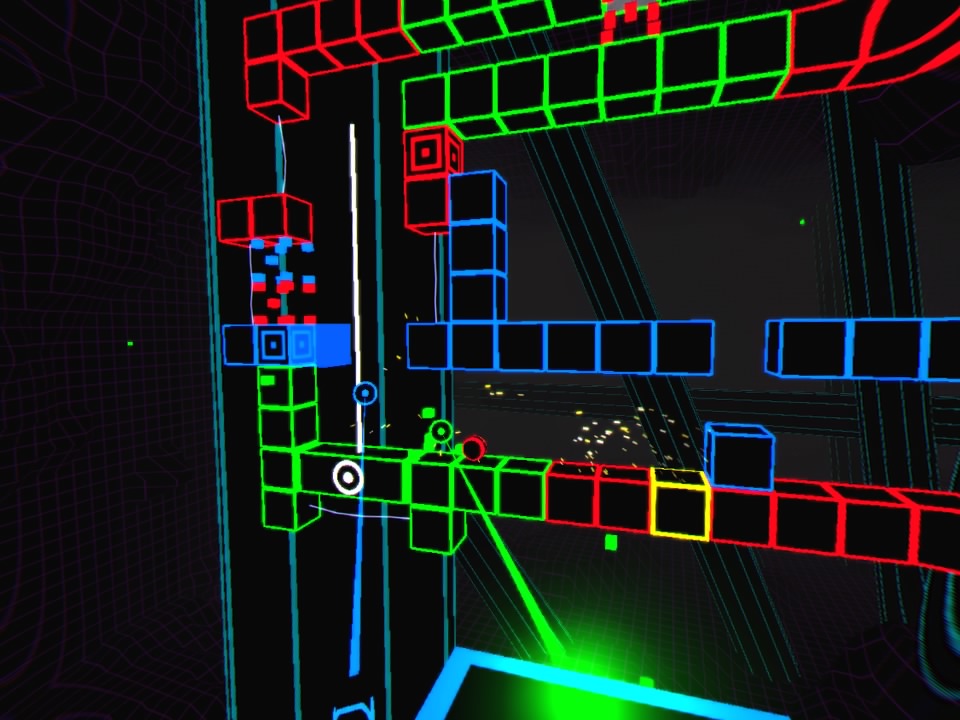 Although you have a choice, playing in VR really is the only way to go with Neonwall.  Aside from being able to see more of the level, the Move controls are much better than trying to wrestle the analog sticks on a DualShock.  Unfortunately though, the game’s basic Tron-like visuals are pretty uninspiring, including the VR effect which is fairly minimal, and the lack of variety in the visuals when combined with the lack of variety in the gameplay meant that the game struggled to impress us.  The game’s electronic music soundtrack is pretty good though with plenty of songs on offer to complement the otherwise fairly sparse sound effects.

If the levels were a bit shorter and more focused and the difficulty curve a little more relaxed, we’d have probably enjoyed Neonwall a bit more but if you’re looking for a puzzler that will test your dexterity a lot and your puzzle-solving skills even more then this is worth a look, especially given how cheap it is (£7.99).  It won’t be a game that we’ll be coming back to in a hurry though.

Neonwall
5 Overall
Pros
+ Simple concept but one that works
+ Definitely taxes your brain
Cons
- Controls can be confusing and feel a bit tangled up
- Uninspiring presentation
- Non-VR mode is significantly less playable
- Difficulty curve is too harsh
Summary
There isn't much that sticks out about Neonwall apart from how tricky the game gets. Fans of difficult arcade puzzle games might enjoy it but the game's lack of variety, uncomfortable controls and lacklustre presentation is definitely a problem.