Neon Abyss is a rogue-like plaformer-shooter from Chinese coding crew, Veewo Games.  It actually released in 2020 but we’ve ended up with a review key for it and so let’s take a look at this already well-regarded game.

In Neon Abyss you play as part of the Grim Squad, a team of vengeful souls who all have a grudge against the New Gods.  If you’ve ever seen/read American Gods, they’re a bit like that.  Gods based on modern day concepts like video, social media, street racing and reality TV singing competitions.  Anyway, they’ve killed you and so now you want pay back.  Thankfully, Hades (essentially the devil) gives you a chance at revenge and you are summoned into Purgatory, which is now styled as a nightclub. 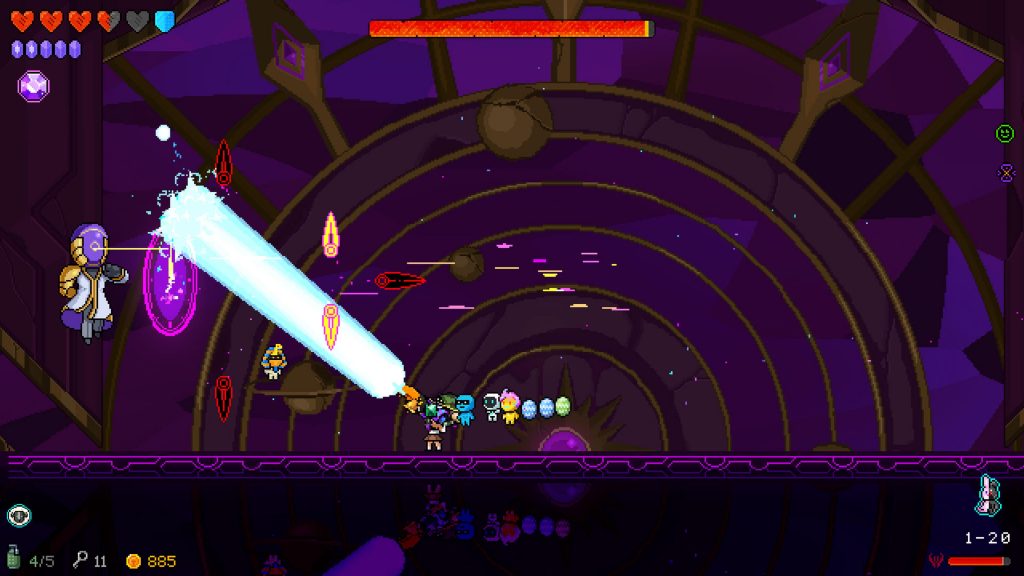 There are a few things to look at in Purgatory, information about playable characters, items and so on but what you’ll mainly be doing there is either buying permanent upgrades or jumping into the abyss itself.  Doing the latter gets you into the main meat of the game.

Here you’ll be in a series of interconnected rooms where you’ll need to jump and shoot your way to the exits.  A system of handy teleporters lets you quickly navigate back to previous rooms (think: Returnal) and like any good rogue-like you’ll be looking to prepare yourself for the boss battle that awaits in each level.  You can, of course, stumble upon the door to the boss quite quickly but you’d be well-advised to explore first so that you can find coins, keys and items that will help you beef up your offence a little first. 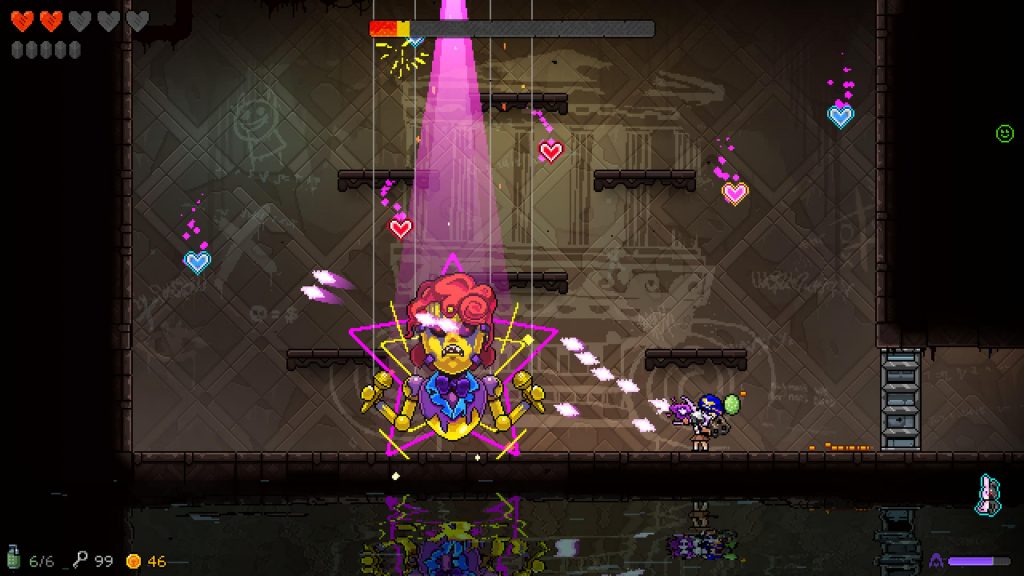 Most rooms involve combat.  Enemies will spawn in and you’ll have to clear them all out in order to be able to leave the room.  Combat is pretty straightforward in that this is a twin-stick shooter.  Thankfully, the right stick aims and shoots (something we always appreciate) but you’ll be using the triggers to jump and use items while

is mapped to character-specific abilities.

For example, Matt can do a dodge roll, Saya (a DLC character who is free) can switch between her gun and katana while others have other abilities to explore.  We generally found that keeping it simple and went for characters with the most health.  But it’s nice to have options and new characters are unlocked as part of the upgrade tree. 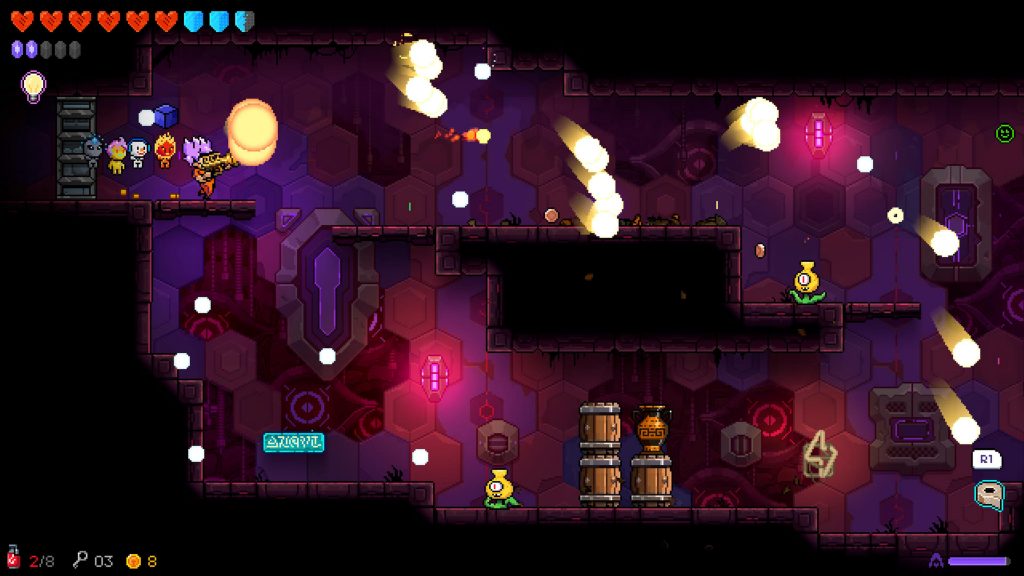 To get those upgrades, you’ll need to kill bosses as they’ll drop the gems you need to trade for upgrades.  But you’ll also be finding new weapons and perks in-play that then get added to further playthroughs as random drops.  It’s all very standard rogue-like fare but well-implemented.  Of course, this does mean that some runs are luckier than others.  On one run you’ll be dying a peasant’s death armed with some weak-assed gun that’s basically not much more use than a pea-shooter (ask your parents) while on other runs you’ll be filling the screen with so many bouncing death lasers that success is pretty much a formality.

After five levels, you’ll have basically killed your ultimate target and then the next time you jump in the abyss you’ll get a new end target and a new set of levels (although everything is randomly-generated).  As you progress through each of these short campaigns, the number of levels and difficulty both increase, making it a bit harder each time to complete the mission but that’s why we have perks, weapons and upgrades to unlock.  That said, the upgrades here are often mostly new room types that give different bonuses based on completing mini-games.  You won’t be getting a lot of permanent boosts to your character.  So do expect things to start getting quite tricky a few hours in. 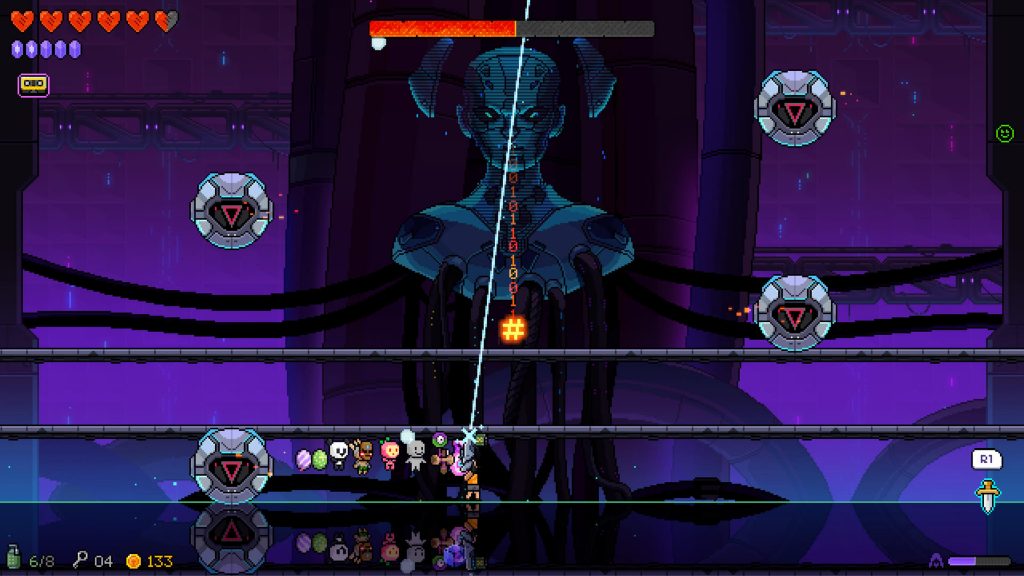 The DLC from the original PC release is included.  This gives you a whole new mode that gives you a series of four-room levels to complete.  It’s not as engaging as the main mode but is fine if you want to basically remove the exploration part of the gameplay from the equation.  There are also the two DLC characters (you’ll have to download some separate free DLC to get them though).  So this is a reasonably complete package.

While the shooting and platforming gameplay is maybe a little too hectic and imprecise we didn’t have any problems with it.  Sure, we prefer the pixel-perfect shooting of something like Geometry Wars when we’re twin-sticking but the erratic combat here is all part of Neon Abyss‘ charm.  In kind of reminds us of the old coin-op classic Rod-Land in some respects in that the weaponry eventually just gets silly. 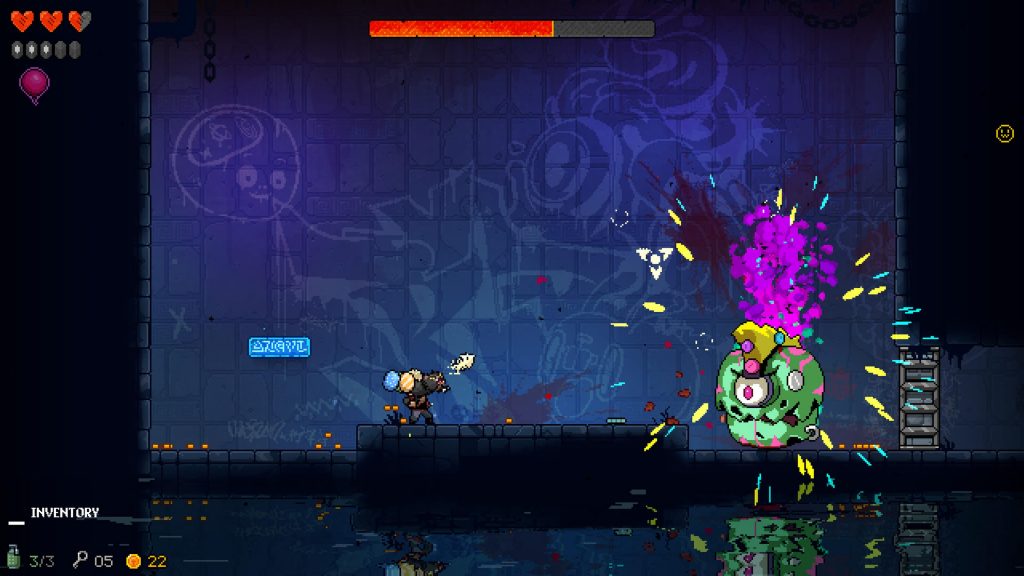 The visuals do a decent job of keeping up with the action though.  Everything is presented in a neo-retro, 16-bit style with the neon nightclub stylings doing a good job of keeping things interesting.  A banging soundtrack also helps to keep the energy up.  You might be disappointed if you’re hoping for any kind of meaningful story but we’re not too fussed about that.

So overall, Neon Abyss is a bit of a gem.  It might not offer the rogue-like perfection of, say, Rogue Legacy but it adds a hectic charm that makes the game entertaining and the gameplay is definitely fun and solid.  The overall rogue-like issue of having to keep starting from scratch might grind after a while, especially as the perma-upgrades aren’t as immediately gratifying as they are in rogue-lite games but you’ll have a lot of fun before you ever get bored.

Neon Abyss
8 Overall
Pros
+ Fun, hectic gameplay
+ Tons of weapons and perks to explore
+ Good presentation
Cons
- Permanent upgrades aren't super gratifying
- Shooting can feel a little clumsy
- Luck does play a bit of a factor in success
Summary
Neon Abyss combines fun running and shooting mechanics with decent rogue-like mechanics and puts it all in a quirky setting. We like it a lot.