Originally released on PC in 2019, Rick Henderson is the latest porting effort from EastAsiaSoft.  Described as an ‘endless horizontal-scrolling shoot ’em up’ the game combines 16-bit visuals and classic shoot ’em up gameplay in a package that is kind of traditional but not entirely lacking in its own ideas.

You play as the titular Rick Henderson or one of his two buddies.  Each character has their own ship and these have varying levels of speed and shield duration while also have their own special ability.  Rick can generate a decoy while Ben has a not very useful teleport move and Thorax, who has the heaviest and more durable ship, can call in an artillery strike.  He’s our guy, basically. 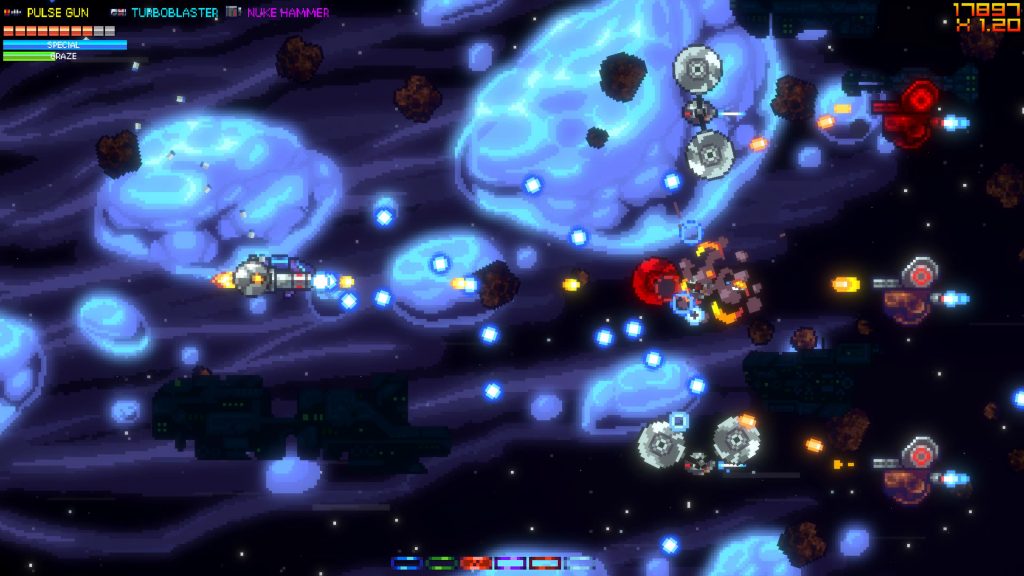 The main control set up is a little odd at first.  There is a tutorial that explains this stuff but you have to go looking for it.  Essentially you have three weapon systems.  Bullet weapons are mapped to

and these are best for standard enemies.  By default these work like a standard machine gun.  Energy weapons are mapped to

and these do regular damage to normal enemies, double damage to shielded enemies but only half damage to armoured ones, by default they have a decent spread.  Finally, missile weapons (mapped to

) do half damage to shields and double damage to armour.  These behave, as you’d expect, like missiles with a slower fire rate.  You fire off those special abilities with the

As you fly through the levels in the standard left to right horizontally-scrolling fashion, you’ll be attacked by various enemies that you need to blast out of the sky.  You’ve played games before, you get that.  So it all feels quite normal and standard.  There are a couple of quirks though.  For starters, the levels are all randomly generated.  You essentially play through loops of five levels at which point the game gets tougher as you start the next loop. 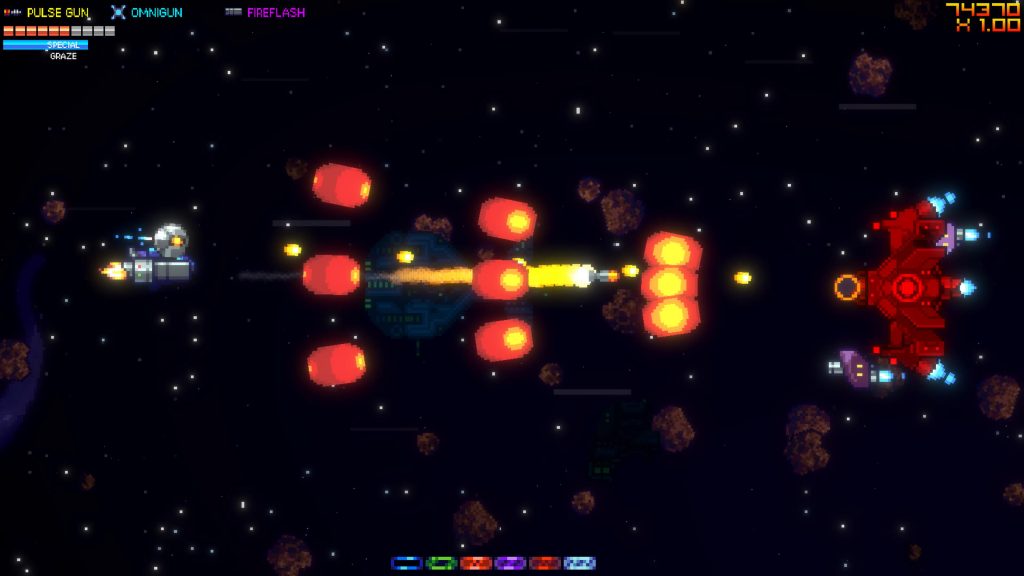 Each individual level has a boss battle (with each boss having one of three variations) and when you defeat the boss, you get to pick a perk to continue with.  These generally improve your speed, armour, firepower or add other more quirky perks.  And on top of all that, there’s a bit of a grazing mechanic where your ‘graze’ bar fills up if bullets narrowly miss you (it resets if you get hit).  Fill the bar and the two other characters show up and start shooting randomly into the play area, giving you a little bit of support.

The graze stuff is a good idea, after all we really love risk vs. reward mechanics in our games, but your ship’s hitbox isn’t clear (it might be the whole ship) and there’s no visual feedback for a successful graze (apart from the tiny bar in the corner) so this doesn’t feel great in practice.  Also, we found that it was more trouble than its worth for the additional air support that you get.  Anyway, it’s there if you want to try to master it. 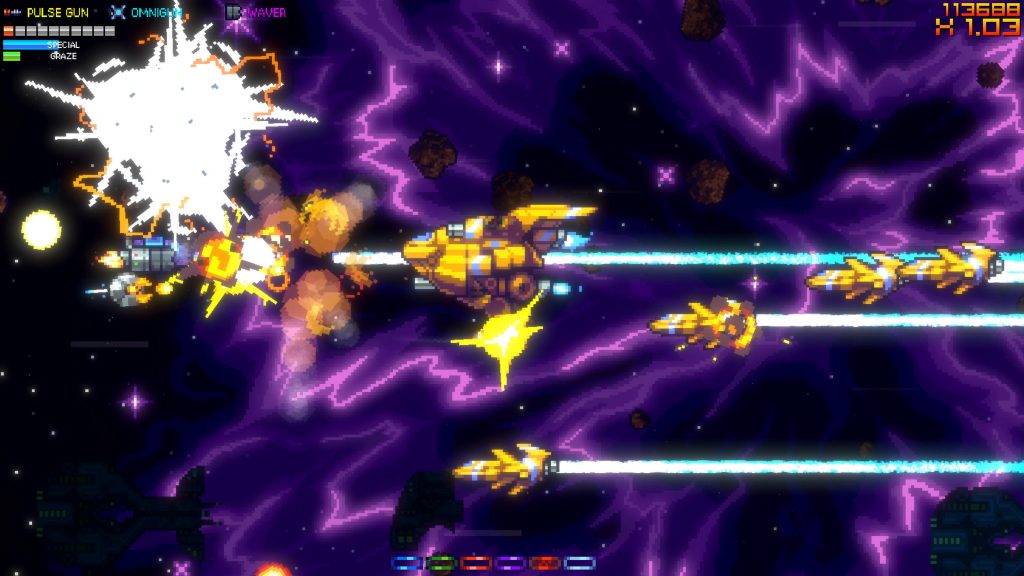 The best thing about Rick Henderson is that it throws lots of weapons at you.  New weapons float into the play area ready for collection and they’ll replace one of your three weapon types.  As you’d expect, some are much better than others, but its always nice to get a firepower boost and there’s a good degree of variation to each of the new weapons so it’s fun to explore their capabilities.

You’ll need all the help you can get though as Rick Henderson does ramp up in difficulty quite significantly.  That’s mostly by design of course but there’s an element of that randomness that makes us feel as though some situations are just a little outside of the main difficulty curve and that could be caused by the algorithm.  Also, your weapon drops and perks will make a difference to your chances of completing the levels and loops.  We found that most of our runs were ended by later bosses too, so there’s definitely a spiking situation there. 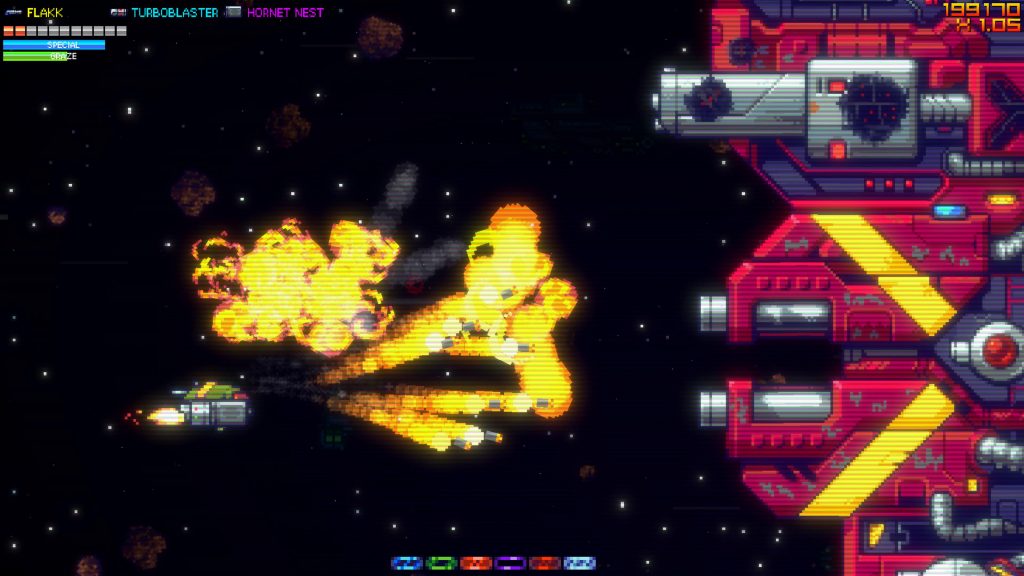 The game plays well enough though and has quite a nice chaotic feel.  The levels do all feel quite samey though with no environmental hazards or level design quirks to speak of.  It kind of feels like a mobile shoot ’em up that’s just scrolling along and randomly throwing enemies at you but it’s satisfying enough to play and feels a bit more ambitious than some of the cheaper PSN shoot ’em ups we’ve played (and we’ve played most of them).

In terms of presentation, the game opts for a pixelly retro look but with enough style and definition to look like a modern game that’s trying to look retro (as opposed to looking like some sort of NES nightmare).  It all moves along smoothly enough and the visuals are clear enough to not cause any issues with the gameplay.  There are some weird visual modes that have the advantage of making things clearer by clearing out the backdrops but these are weird, monochromatic filters that look kind of ugly.   You’ve also got scanline options if you like that sort of thing. 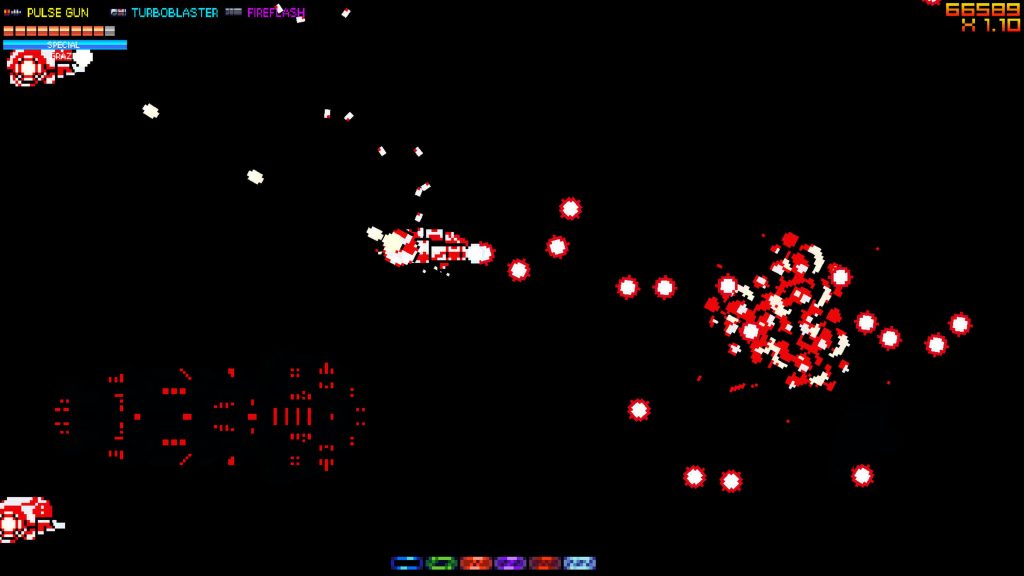 The game’s music is really decent with some booming tracks on there.  Unfortunately, the sound effects are very weedy with explosions sounding more like people clapping.  It’s weird that so many shoot ’em ups don’t beef things up with heaps of bass when things blow up.

Overall, we’ve enjoyed Rick Henderson for the most part.  It’s not memorable but that’s because of its random nature, it never throws set-pieces at you but if you want a straightforward shooter that pushes the action and has plenty of weapons to try out, you could do a lot worse than this game.