As more years go by, Visual Concepts’ NBA 2K series feels like a stuck record. Whilst it is uncontested, the basketball they deliver is largely of astounding quality. Last year’s effort felt like a backwards stumble. The changes to shooting appeared to backfire and many post-release patches were handed out in an effort to address it. You only really get to review something once in this gig and here’s hoping NBA 2K22 is ready to go. 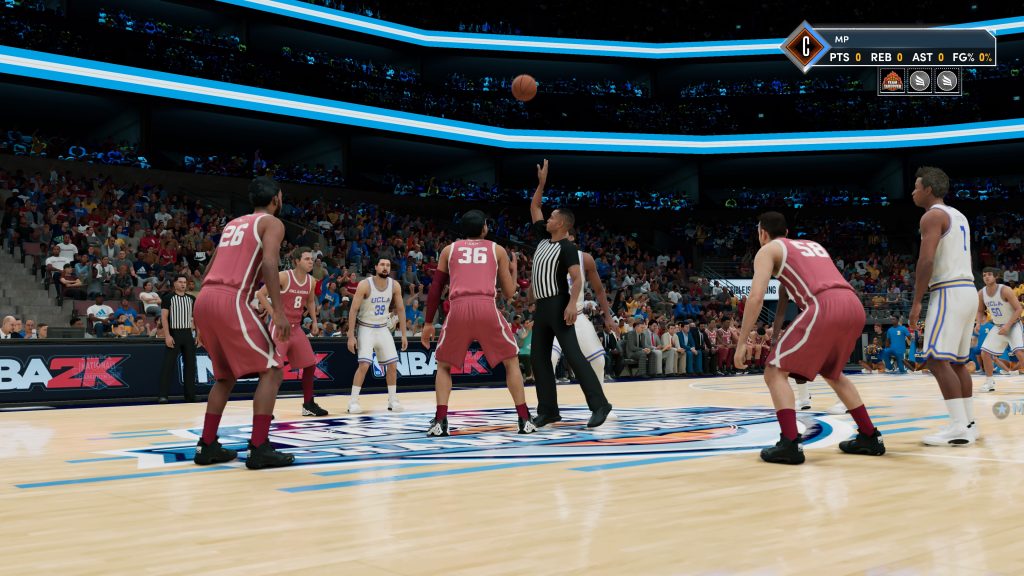 The good news is that the issues over shooting are now resolved. It’s a lot more consistent whether shooting with square or with the right stick and allows you to be more adventurous when it comes to selecting your shots. I’m no longer relying on close-range efforts to keep the scoring up and the meters are a lot easier to handle. I’ll never be good at basketball but at least I can feel reliable when going for relatively easy baskets.

Elsewhere on the court, it’s as fluid as ever. AI plays smartly, moves well and can provide everyone an appropriate challenge. The sport itself is lovingly created and remains one of the most in-depth sports games on the market. Novices like me can jump in and compete although I do wish the 2KU mode had a bit more to it. Running drills and showing off the controls just doesn’t feel as beneficial without some context to explain why I should be running these plays. Admittedly, I play NBA 2K22 as if it was 5-a-side soccer. Defensively, I cover my opposite number and just try to delay the opposition as long as possible. I would love to dig a little deeper into it but never really commit to these games as much as I should. 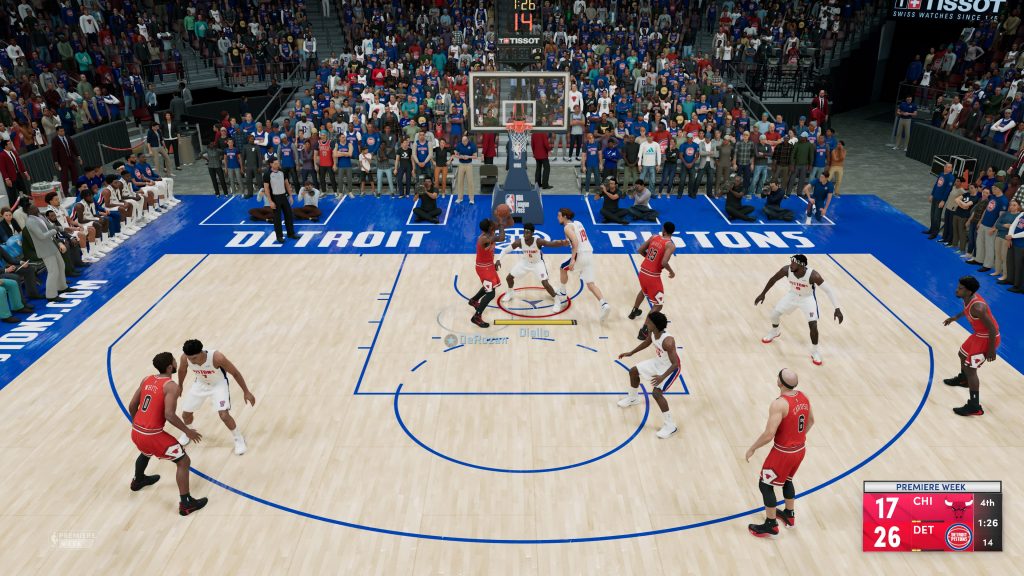 Those deeper options are there and it’s a credit to Visual Concepts for how good their foundation has always been. Running plays, hitting dunks, alley-oops and lay-ups are satisfying to pull off. Defensively, timed blocks and capitalising on rebounds are fun to nail and the action never stops. Players animate really well and and it’s great to see players grow in confidence during a game. It’s a shame that doesn’t always feel organic. I’ve had tight games go completely sideways in 4th Quarter blowouts without really knowing what I was doing wrong. As a sport, basketball loves to hinge on numbers and streaks and I’ve found myself caught out more than a few times.

That feels, in part due to the way stamina now impacts shooting. I’m guilty of keeping my starters out for way too long and those tired legs do start to show. It does lead to focusing more on teamwork and smarter movement. Brute force doesn’t work as often. It feels a lot better than last year and it’s nice to see Visual Concepts getting back to a more impressive simulation on the court.

Presentation continues to be stellar. Framerate is buttery smooth on the Playstation 5 and the sharper image does shine through. It’s not leagues apart from the Playstation 4 version but it’s clear lighting has an upgrade and textures carry more detail. Loading into a game is very quick and the menus feel slick. Above all else, the TV-style broadcast remains phenomenal. All the courtside action, reporters, half-time shows and atmosphere is top notch. I take it for granted with this series but 2K really put their best efforts into making the court feel alive. Commentary does well to match the action and helps each game feel like an event. 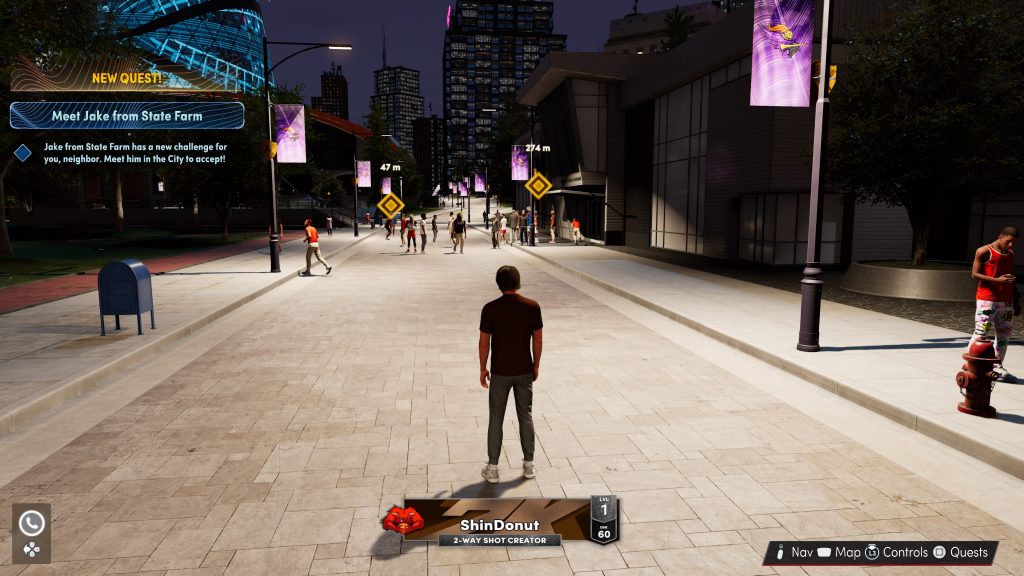 There’s nothing new in terms of modes this year. MyCareer carries a little less fanfare this year without an explicit story mode to follow. The City, traditional social space for the series, takes more of a centre stage. After creating your player and stats you’re shown your apartment and introduced to you manager. From there you can pick whether to start at a college team, G-league or go big and enter this year’s NBA draft. It is interesting to give you the latter option right out the gate. It has the potential to speed the process up for veterans. Picking the other two almost alludes to a thin narrative but, in reality, it’s not as concrete as the story attempts of yesteryear.

On the one hand, it’s nice to strip that stuff back and just get on with the basketball. Out in the city, you can complete quests. These range from backyard scraps to training drills or taking on a college game with a single objective in mind. I do miss a more explicit narrative and, when it was an explicitly single-player effort, it was easier to ignore the more insidious aspects of 2K’s business.

Encompassing it within the City can’t help but draw attention to the microtransactions as every player walks by with their badges and perks on full display. Every time I boot the game up, I’m informed of new events either relating to MyCareer or MyTeam and it can be overbearing. Sure, you can earn that gear without spending a penny, but the game really, really wants to let you know the other options. On top of that, the old problems persist like being unfairly penalised for defensive breakdowns beyond your control. Otherwise, the on court stuff remains compelling. Should you wish, you can take on some off-court excursions to build your brand. Celebrity endorsement deals are fun diversions but you can dismiss these entirely if you just want to stick to the day job.

For MyTeam, the card-based team-building mode remains rife with this. It can be fun to put together your own dream starting line-up but I’ve never really liked these fantasy modes as they seem much more limiting than playing out your general manager efforts in single-player. It’s still a relatively new mode for the series but it seems to bear the sting of putting money down. It does carry a different flourish but it’s not a mode I feel like getting into. 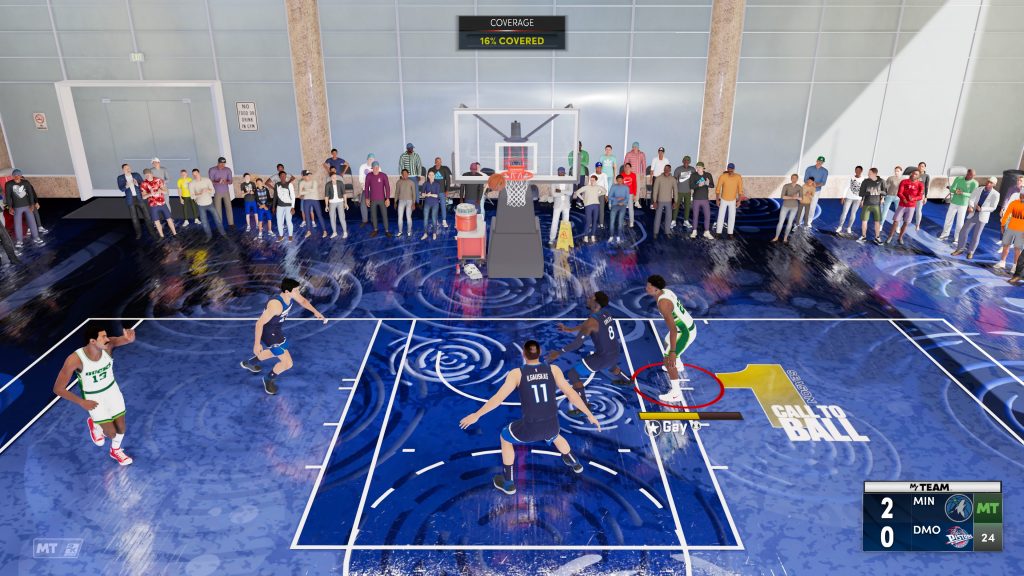 The WNBA does continue to become more substantial, although you can see it’s been crammed into the male counterpart’s framework. It’s doesn’t quite feel like it’s own thing yet and the menus make the mode still feel like a sideshow, rather than a main event.

Overall, NBA 2K22 does take some steps to recover from last year’s stumble. The on-court action feels more refined and the stamina changes now reflect a much more thoughtful game. Shooting now feels a lot more reliable and the presentation continues to be absolutely on point. It’s a shame the microtransactions seep in from every angle but I can ignore it as a guy that predominantly keeps playing solo.

NBA 2K22
7 Overall
Pros
+ Shooting works as intended this season. Reliable and consistent.
+ The stamina system promotes a more thoughtful offense.
+ A thoroughly solid basketball sim that is stunningly presented.
+ A wealth of content to try out.
Cons
- The prevalence of microtransactions can be very overwhelming.
- MyCareer still suffers from some unfair performance grading.
- The WNBA doesn't quite feel fully fleshed out.
- Menus remain occasionally clumsy to navigate.
Summary
NBA 2K22's basketball feels more refined than last season. The revamped stamina meter leads to a more tactical team game and shooting is consistent and reliable. It looks as sharp and well-presented as ever and those wanting some quality time on the court will be well served. Unfortunately, the familiar encroachment of microtransactions dominate the MyCareer and MyTeam modes. The old problems with judging your performance also still persist.