Embr is a first-person firefighting game that comes to us from New York natives, Muse Games.  Originally released on PC in 2019, the game has finally made it across to consoles and with cross-platform multiplayer to boot.

There have been a few firefighting games in the past, including a few simulators that are serious in tone but Embr approaches the subject in the same way that Overcooked is about cooking and Moving Out/Get Packed  handle furniture removals.  That’s right, it’s all very silly.

The idea here is that fighting fires has gone the same way as taxis, it’s now all through an app (the titular ‘Embr’).  You work as a private contractor and each level is a building that is on fire and your performance translates to progress and, more notably, payment.  The more people, and possessions, that you rescue, the more you’ll get paid.  The money can then be used for upgrades and new equipment which, hopefully, will improve your performance. 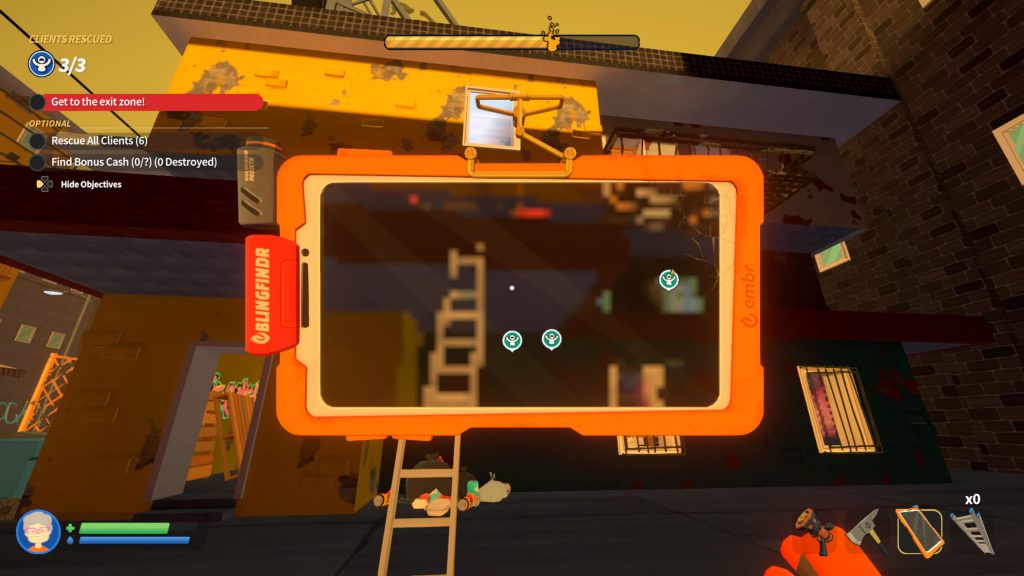 You start each level facing a building fire and are armed with a hose and an axe.  Axes are used to smash through doors and obstacles and the hose, of course, is used to clear fires.  That said, you’ll really just be clearing a path through fires rather than putting them out as these buildings go up quickly.  You’ll need to be careful around electricity unless you have the right type of extinguisher but using water to conduct electricity is also used for some puzzle solving too.

You are also equipped with a tablet that highlights the locations of people trapped in the building and to finish a level you’ll need to rescue a minimum number of survivors.  To do this, you pick them up and have to take them back to the rescue zone outside.  You can carry them there or throw them.  The area is padded so you can throw them out of windows upstairs but if you miss the target, they’ll die which will affect your level rating and money.  You can also do the same thing with objects in the house.  Anything you save has a monetary value and will earn you tips but sometimes you’ll need to take shortcuts and try to throw that TV to safety rather than carry it through the fires downstairs.

Accessing higher levels of buildings is usually possible via staircases but you also have a ladder that you can place and climb.  This lets you access upstairs rooms more safely, at least until they catch fire too, but is quite a fiddly process 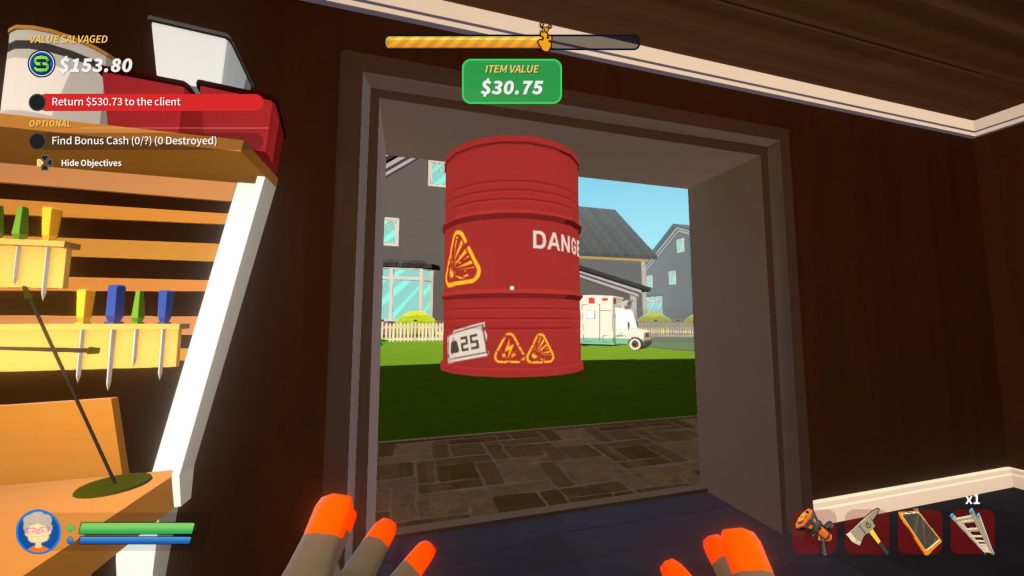 thanks to Embr‘s slightly exaggerated physics.  Much like Moving Out/Get Packed, part of the fun comes from how manic everything is and how excitable the physics are.  Initially it feels quite clumsy (we had to tinker with the sensitivity settings in the Controls Menu) but when you get used to it you realise how deliberate the feeling of the controls is.

After a while you’ll be able to purchase a nifty grappling hook and better equipment but getting to the survivors is always just half the battle, so while it’s fine Batman-ing your way up to the 2nd floor, getting a survivor out might be tricky.  Thankfully, objects and people alike can be thrown (through windows if needed).  So if you can get them to land on the rescue zone, it’ll be fine.  Misjudge it though and they’ll die as they hit the ground.

In terms of the core gameplay, it’s actually surprisingly tense.  The fires do rage with quite a bit of intensity and will cause joists to collapse and block your way.  They’ll even cause entire floors to collapse, making navigation even more tricky.  You’ll usually have to exit the building and then re-enter several times through various windows because before long, big sections of the house will be lost to the flames but if you do have to go through a room that is entirely on fire, it’s a pretty daunting thing. 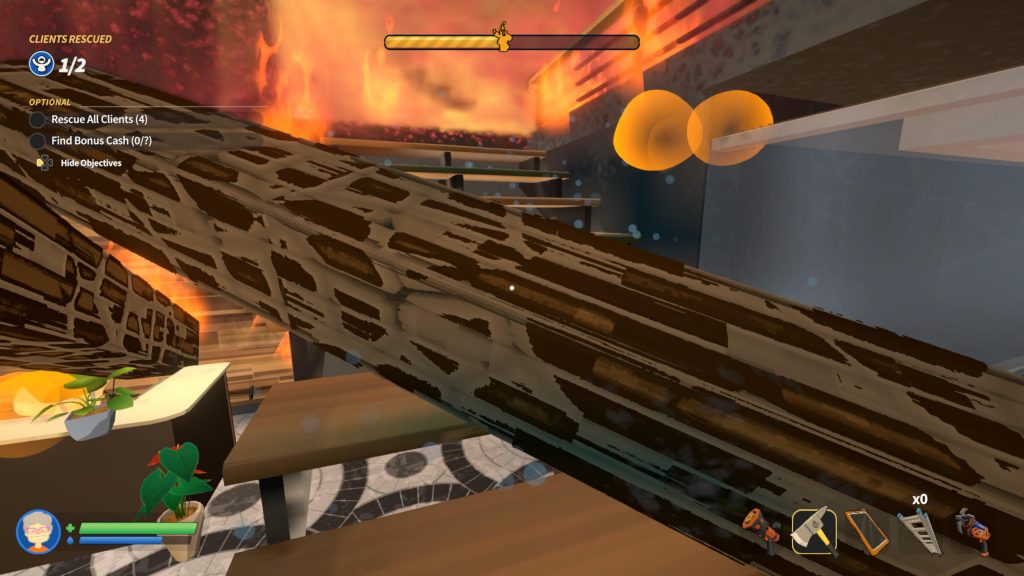 The five star rating system and all the equipment upgrades do offer up some good replay value though and Embr does a good job of mixing things up by throwing in different types of mission.  Aside from the usual rescue missions there are also missions where you have to find a specific object, do as much damage as possible, salvage as much as possible and so on.  The game also throws escape missions at you.  These are pretty tricky as they’ll put you high up in a burning building without most of your equipment and you’ll need to escape.  These function more as puzzle levels as you’ll be trying to clear specific hazards, open doors and activate equipment.  A lot of this is done by conducting electricity using your hose.  It’s good to see them switch things up like this but we have to admit these were our least favourite levels.

At the time of reviewing there’s really no-one playing online but hopefully that will change as the game supports online fire crews of up to four people.  We weren’t able to test the netcode (although you can play solo while being in the online mode and it worked fine) but it’s a nice addition to have.  Local split-screen might have been nice but given that we’re still in a bit of a pandemic, it’s not essential.  That said, unlike Moving Out, Overcooked and Get Packed, Embr feels like an entirely credible single player game and doesn’t feel as though it really needs multiplayer. 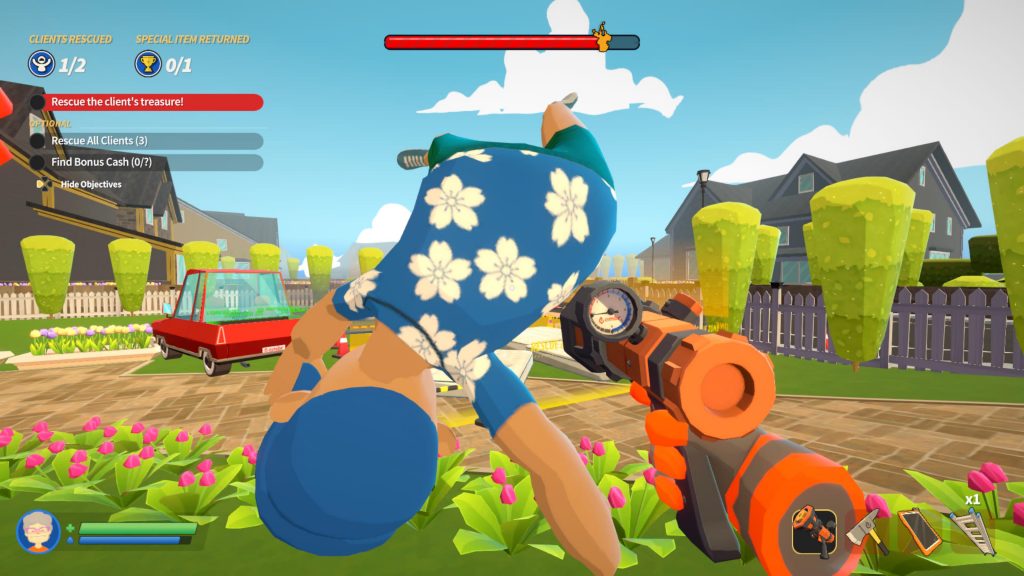 Visually the game is pretty simple in design and looks very much like a cheap and cheerful indie port.  The destructible environments make the simple graphics a bit of a necessity but the game is bright and colourful and does a pretty good job of relaying all the visual information you’ll need to be successful in your missions.  There is definitely a sense of danger, you know that you’re in a fire and that things could go south pretty quickly and the presentation is complete enough to take advantage of its silly corporate comedy stylings.

The worry here though is that the cheap and cheerful nature of the game, and the fact that there is a glut of barely curated trash on PSN being released all the time, might limit the appeal of the game to potential purchasers.  This is the sort of game that would benefit from inclusion on PS+, giving it a ready made online base but, as we said, solo firefighters are well-catered for with this one and there’s a lot of fun to be had from Embr.  We’d like to see this type of game with a real budget behind it but the game’s charms are pretty evident as it is.

Embr
7 Overall
Pros
+ Good core concept
+ Decent replayability
+ Breezy presentation
+ Online play is supported
Cons
- Controls are sluggish
- Feels like the PC port that it is
- Escape levels weren't particularly enjoyable
- Visuals are a bit basic
Summary
Embr is a fun firefighting game with a true sense of silliness. We've seen the physics-heavy party game done a lot recently but Embr's originality and focus on replayability make it stand out as one of the more unique games in the genre.