Stillalive Studios managed to impress with me Bus Simulator. The relaxed and charming running of a bus company managed to resonate with me as a regular public transport peasant. Despite this, it had some clear issues with meeting mission objectives and technical issues. Now three years have passed and the time spent tweaking the formula seems to have worked out for the better. 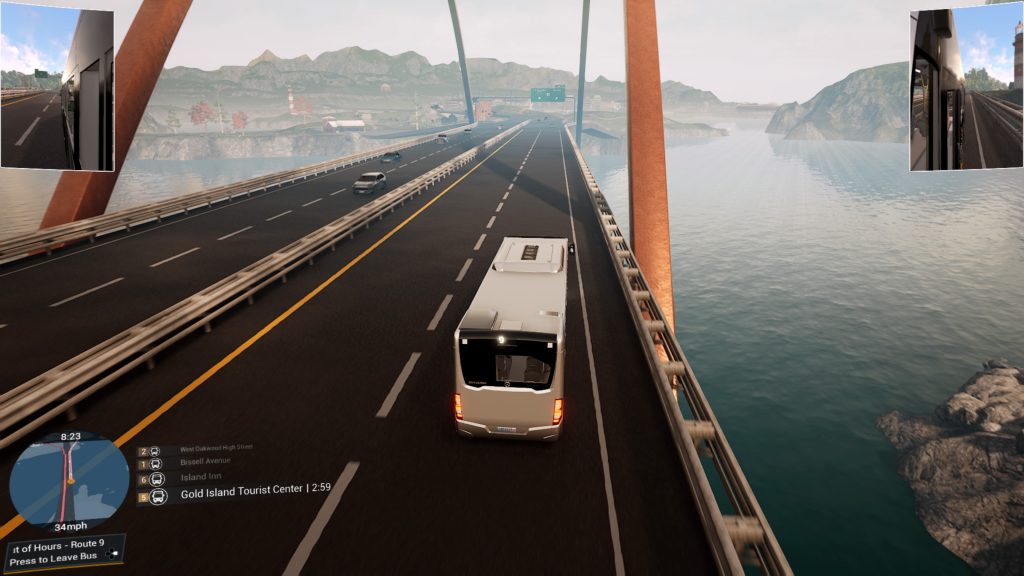 Bus Simulator 21 makes a change in location. There’s both European and American maps on offer. The latter appears to be a San Francisco facsimile with a Chinatown district and some neighbouring villages that surround a bay area. Unlike the Californian city, it’s a largely flat locale, not too dissimilar from the last game’s map. It is larger and certainly seems to carry more life. People move about, there’s a lot more traffic and parked cars and it looks more animated than in 2018.

Visually, it looks slightly more polished. Movement of pedestrians is still fairly robotic but the sunny weather opens things up for some scenic vistas. It’s not pushing many boundaries but it holds together on a technical level. There’s some texture pop-in but I’ve tended to notice it less and less as I’ve played more. Crucially, it’s a much more stable experience with no crashes or glitches to speak of. 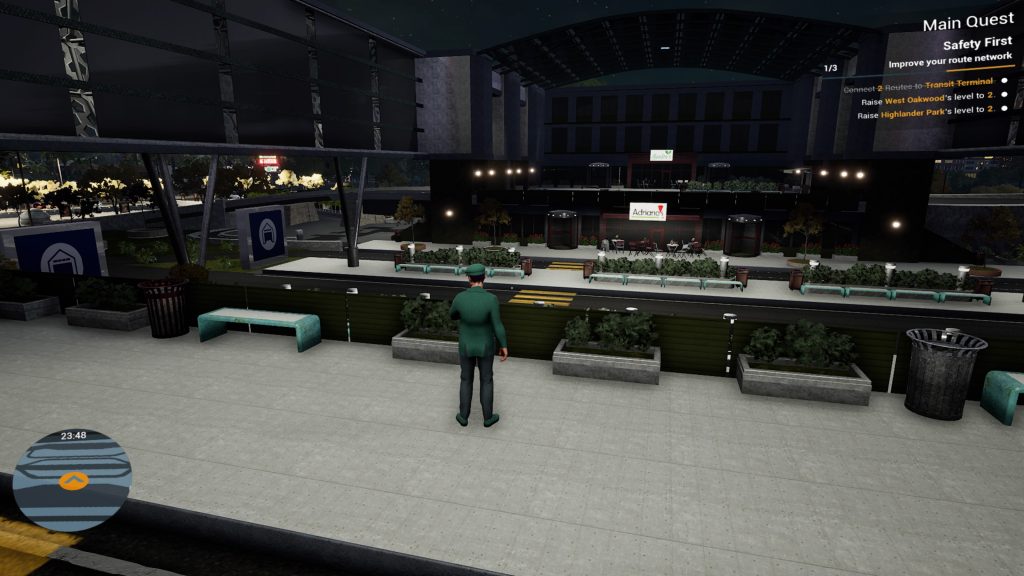 The structure of Bus Simulator 21 has resulted in something more streamlined. Previously, you spent a lot more time in menus as you set up routes and accomplished missions. There was plenty of time spent loading and feeling somewhat disconnected from the world. Now, you’re largely out driving buses and missions come at you with a lot more frequency. There’s no confusion over objectives and it all moves more fluidly from one job to the next.

Mission objectives are easy to grasp. During the campaign you’re mostly tasked with building a bus network by connecting the city’s districts to existing routes. I enjoyed the territorial aspect as more streets come under your wing. As your company owns an uncontested monopoly, you can really see control you have over the bus routes. Seeing one of your own buses flash at you as you work a route always feels nice and the length of the campaign does remind me how much more ground you cover. 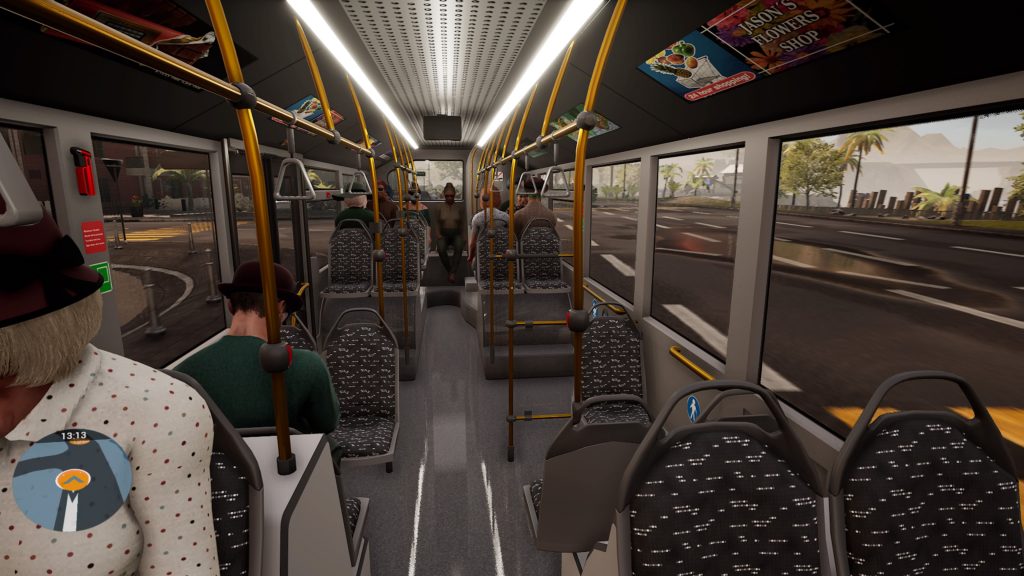 Driving is a fairly leisurely experience. I keep the default options so kneeling at the kerbside and other intricacies are automated. I like to keep things simple and driving still leaves plenty for me to do. Indicating and handing tickets out take up most of your duties but there’s plenty of other tasks to be taken on. Upgrading bus stops is now something you can manually do from the menu. Servicing passengers at stops allows them to level up. I don’t see any cosmetic upgrades but more experienced stops are capable of handling more connections.

There’s been a change in what maintenance tasks you do whilst behind the wheel. No longer do you clean up at the end of a route or return lost packages to passengers. Instead, you have the more familiar noisy passenger or person blocking the door. Some customers will ask you to drop them off as they’ve missed their stop and it’s all very familiar. These can be minor inconveniences, especially if you’re behind schedule but the timing window seems very generous. I’ve not had to abandon a route due to poor timing yet.

The menus also offer more information in how you can tailor a route for maximum profit. You can find out their most profitable times and how balanced a route is. This will help any bean counters make the most of their network. I like when Bus Simulator 21 uncovers the economics of mass transit, and whilst it’s not especially complicated, it shows another facet to the game. Not that you’ll be struggling for funding. 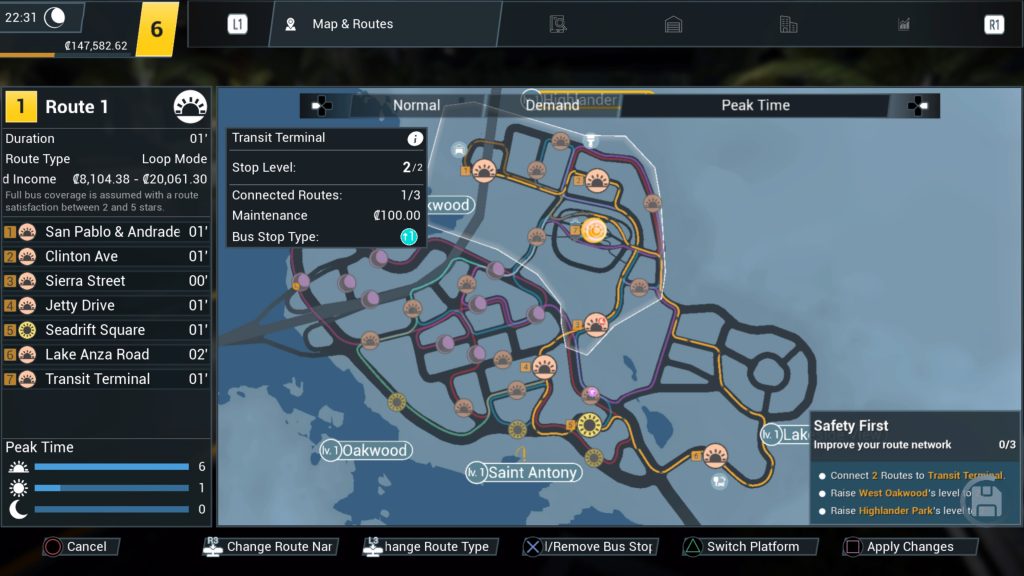 Sound is largely as it was three years ago. There’s some repeated jokes and lines of dialogue that, whilst charming at first, quickly becomes routine and boring. Oddly, you still get this chatter on empty buses. The buses themselves sound absolutely fine. I don’t think they sound particularly unique but they all carry an authentic look. Bendy buses are still nightmare to navigate tight streets with. Double-deckers and electric buses make their debut which gives the garage some variety. Buses are also more customisable. You have to unlock colours and decals in the campaign but you can tweak interiors and give your company and specific routes a sense of branding.

Bus Simulator 21 does improve over the last effort in some meaningful ways. The driving remains fairly straight-forward and relaxed but the economics of running a bus company have been expanded upon. The overhauled missions really help the game flow and removes some of the headaches of the previous game. It’s well done, if still rough around the edges.

Bus Simulator 21
7 Overall
Pros
+ Missions are now much more manageable and straight-forward.
+ Driving is simple and relaxing.
+ Plenty of new buses and areas to explore.
+ The economics of route-building has been expanded in significant ways.
Cons
- Still rough around the edges visually.
- The passenger chatter can grate fairly quickly.
- Can feel repetitive at times.
- Traffic and pedestrians can prove a nuisance with their sometimes slow movement.
Summary
Bus Simulator 21 remains relaxed in its driving but a few key tweaks to the mission structure makes for a more flowing experience. The new buses give you plenty to new toys to tinker with and the new locations show a touch more life to the city. It's still got some rough edges but I had an enjoyable time. The flow of the campaign is greatly improved and makes for a much smoother ride.