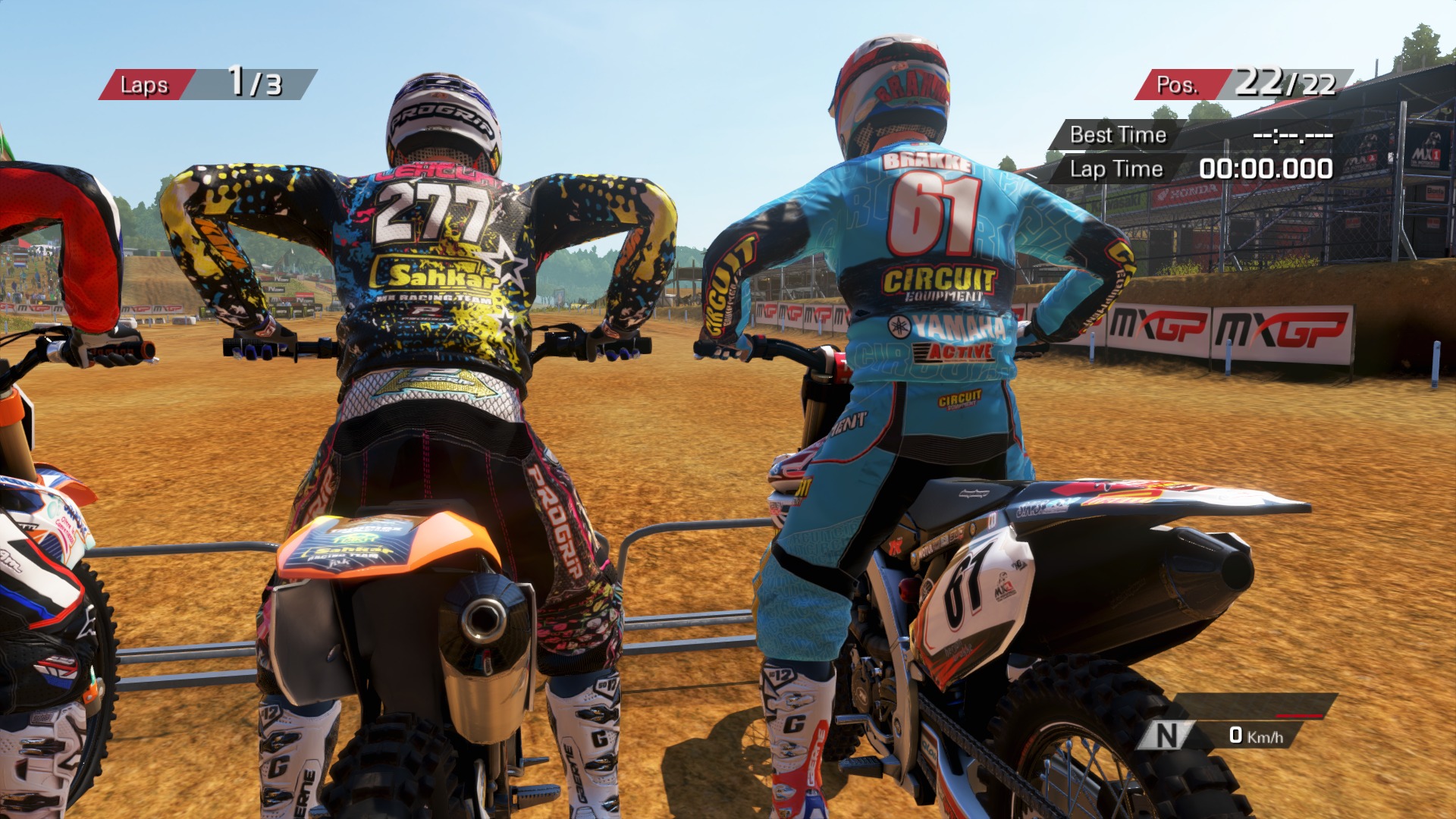 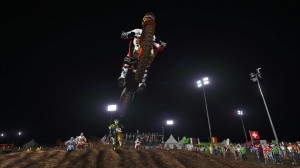 Now, despite being a crotch-rocket fan, I’ve always favoured the relative sanity of tarmac so I approached Milestone’s latest Motocross simulation, MXGP, with some caution.  Its not a sport I’ve kept in touch with since my youth so entering the tight, hectic pack racing of Motocross initially felt a little daunting.

Luckily, the game offers several short but insightful tutorial videos for rookies which, unlike other sports titles, seems intent on explaining why you’d want to do things like the scrub which, I’ll be honest, I just thought riders did to show off.  Its very apparent from this introduction that it wants to  include new players whilst also trying to provide plenty for the experienced.  There’s still a little bit of a learning curve, particularly if you’re new to the tracks but there’s great satisfaction nailing the rhythm of new terrain.

Visually, its not one to dazzle.  It’s functional at best.  Milestone have never really been ones to push hardware for maximum fidelity.  In their defence, the track list offers some fairly varied locales and everything is condensed to convey a bit of life.  What they do offer is some decent track deformation so seeing grooves form after a couple of laps of competition is neat and its nice to see its not just cosmetic.  Crowd noise does a little to convey some atmosphere but its mostly your constant farting engine dominates your ears   Its nothing spectacular and could really do with some polish but the riding itself does enough to compensation for the presentational blandness.  Trying to react to the changing track surface does feel engaging and mastering it makes you feel accomplished. 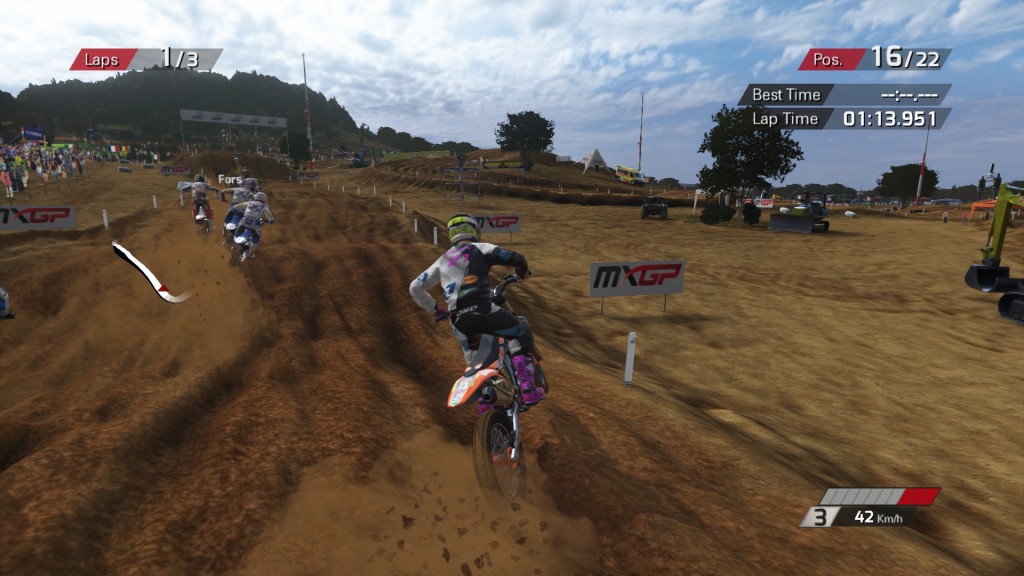 Game modes are standard fare.  You’ve got your usual quick race, Grand Prix, Championship and time attack modes to hone your skills and a rather excellent career mode that follows on from their great work on the MotoGP games.  You start your rise to the top with the occasional wildcard entry in an effort to land a secure race seat for the next season.  It portrays an authentic progression with race-by-race goals to meet and new people to impress and, once on the main roster you start to climb the ladder of MX2 in an effort to impress the big factory teams of MX1.  Its a lengthy, meaty challenge that will certainly keep players coming back for more.

The on track action is predictably packed and tight with spills guaranteed.  Regular crashes can be frustrating but the game resets you swiftly enough to keep you in the fray.  Its a shame there’s rare instances where you’d wish you could reset manually.  The game takes track limits quite liberally.  You’re not punished for corner cutting but if you wind up jammed next to a sign and have to spend five seconds trying to get back on track you’ll wish you could just reset.  Its a minor annoyance but one that could’ve been ironed out.  I’ve also noticed that AI on the medium difficulty is fairly easy to hold at arms length so, those wanting competitive racing should bump it up to hard.  You can also alter racing assists and physics models to provide further challenge. 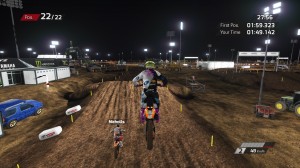 Multiplayer modes are strictly online so anybody fancying something local are going to be disappointed.  You can participate in ranked single events or online seasons which work similarly to FIFA’s counterpart modes.  Placing well in these gain you points which in turn take you into higher divisions.  Along with career mode, I can see this being a compulsive diversion you could sink hours into.  With the AI being so casual, you might get more out of online competition.  Online is fairly active at the moment so getting into games hasn’t been an issue.

Racing fans on this platform have been really starved and in MXGP we have something different from a rarely trodden path which, whilst not pushing the bar technologically, has compelling on-track exchanges which earn the game a look.  A robust career mode, coupled with a interesting online component and enough accessibility for the curious make this title a welcome surprise. 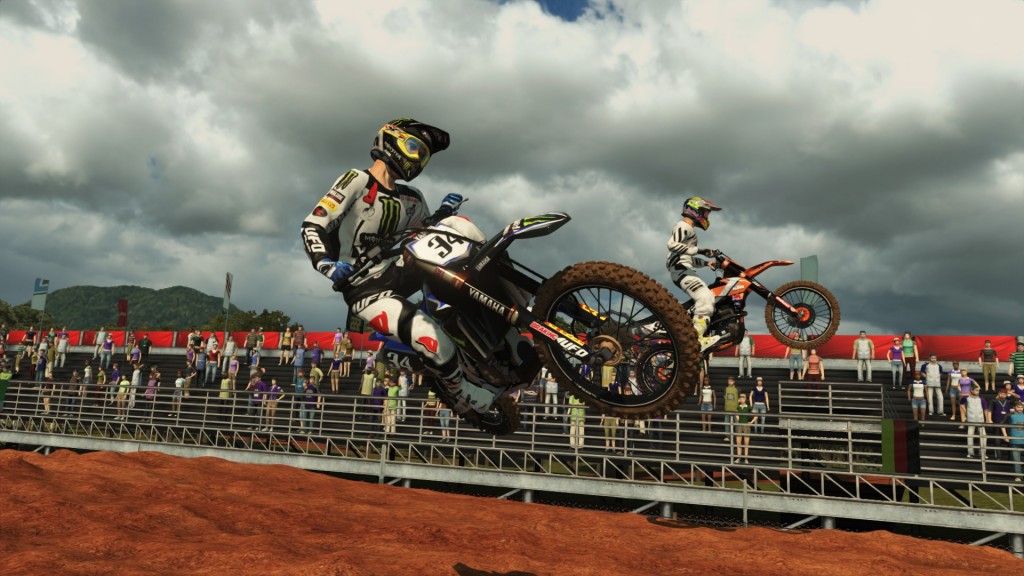 MXGP: The Official Motorcross Videogame
7 Overall
Pros
+ Easy to pick up and play, difficult to master. + Plenty of content to sift through. + Fun, intense racing.
Cons
- AI offers little challenge. - No local multiplayer. - Lacks polish.
Summary
As a guy used to the tarmac circuits of Milestone's other work, its great to see how it compares on the muddy hills of Motocross. It transitions well and, whilst the AI doesn't offer much opposition, the racing remains entertaining and occasionally tense. There's a lot to look at and the career mode gives you something to persist with, even if the game has some rough edges.
We use cookies on our website to give you the most relevant experience by remembering your preferences and repeat visits. By clicking “Accept”, you consent to the use of ALL the cookies.
Cookie settingsACCEPTREJECT
Manage consent