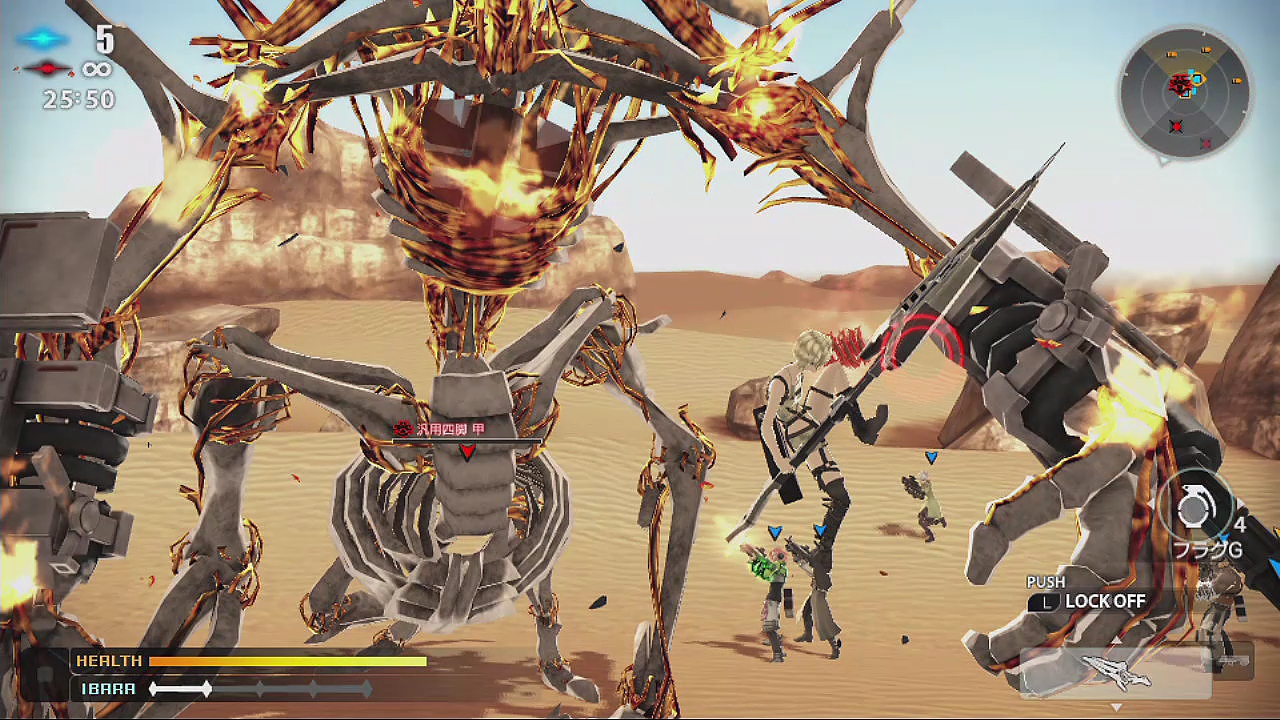 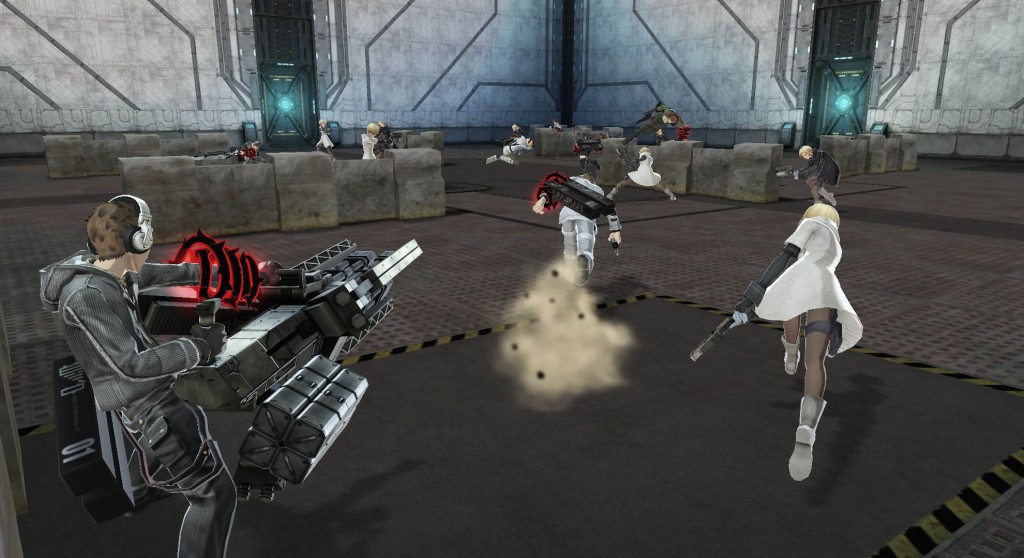 What’s that, you’ve lost your memory? You don’t have the right to do that. Have a prison sentence of 1,000,000 years! This is how Freedom Wars starts it could have been subtitled Crime and Punishment as it’s all about doing time.

You take the role of a Sinner, a member of one of the city states in a future Earth that has been ravaged and the rest of the population live in Panopticons which are huge underground bunkers. Most of the citizens of these Panopticons are working to support the state, and must make regular contributions in the form of resources for the upkeep of the state. Think George Orwell 1984.

Given the scarcity of resources the Panopticons are at war with each other, and this is where you come in. You are branded a criminal, given a prison sentence and have had all your rights removed  such as the right to pace in your cell or even lie down to go to sleep. In order to work off your sentence, and regain your rights, you need to complete missions.

As a third-person action game the missions have you running round maps and killing most things that get in your way. You are never alone though as often you are joined by a squad of fellow Sinners, or your very own companion droid called an Accessory. Each of your squad mates will have separate roles, such as healer or heavy and can be relied upon to help you when you need them. There is also an online aspect to this game where you can go head to head in team battles with up to eight players. This works well and I had no issues finding games to join.

Your Accessory droid is also your prison guard and outside of missions they will tell you what you can and can’t do. You’ll need to seek their approval to do almost any action in the game, from embarking on a mission through to saving your game. This all works well within the fiction of the game as it makes you feel trapped and gives you a decent sense of how the Panopticons work. During the early stage of the game you are given the ability to customise your Accessory and you can change what they look like, provided you want them to look like your typical JRPG emo character (you certainly get a nice selection of spikey hair to choose from). 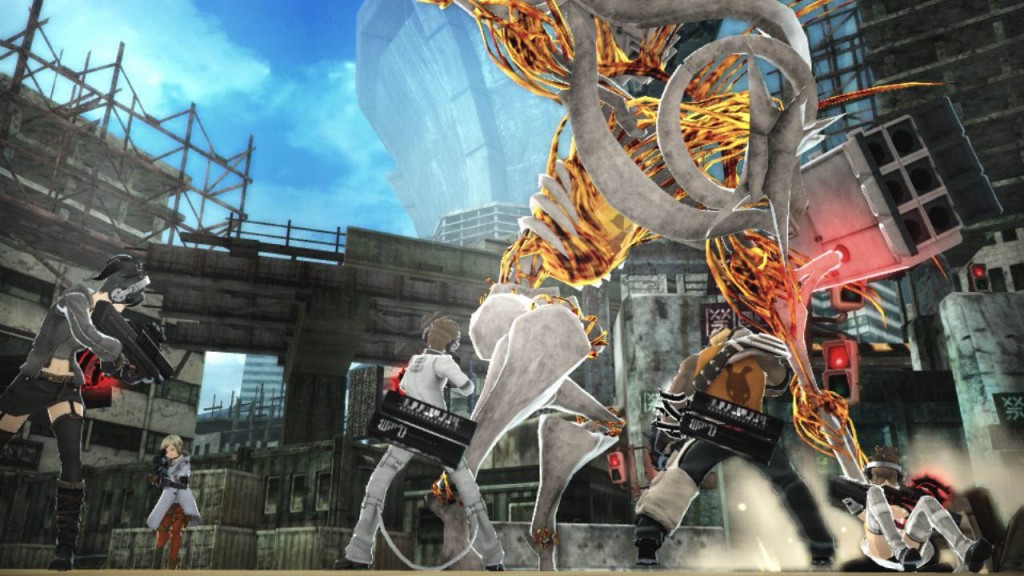 During your missions you and your squad run around the maps fighting enemies and securing resources. Most maps have fellow citizens to rescue, and this forms the main goal for each level. The citizens aren’t just roaming about though as they are trapped within giant bipedal robots, called Abductors. The Abductors carry different offensive and defensive loadouts and the only way to rescue your citizen is to destroy these Abductors .

Before each mission you are given three weapon slots to play with and accessory slots. Ideally you’ll want to use one slot for a melee weapon and one for a gun. Your third and final slot must carry your Thorn, although as the game progresses you get to select which Thorn to take. There is a huge range of customisation on offer here with each weapon not only having different characteristics but also being able to be further customised with scavenged items. As a nice twist the construction of upgrades take place during real time relying on your Vita’s internal clock. 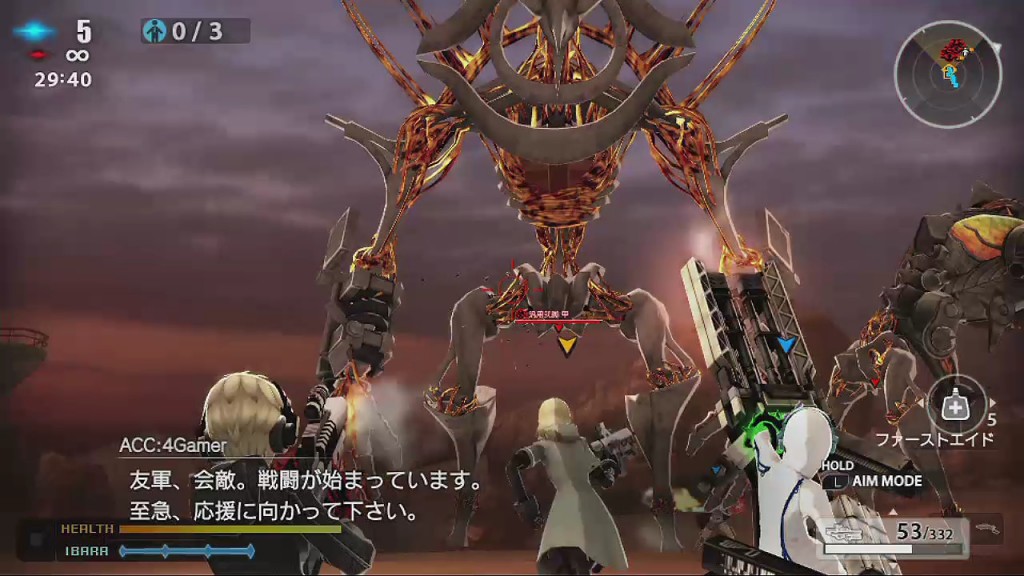 The guns and swords on offer are fairly self-explanatory, but it is the Thorn which really makes this game stand out from the crowd. Your Thorn acts like a turbo charged whip, and you can use this to grab items, scale the scenery or attack enemies. You can also unlock additional Thorns which provide different effects such as healing or defence. Using your Thorn against smaller enemies like humans allows you jump towards them and attack them with your melee weapon. The real fun though comes from using it against one of the large Abductors. Upon targeting an Abductor you get to choose the location to attach your Thorn, dependant on the choice you make you can attempt to pull the Abductor over onto the floor, or jump up on top of it and brutally sever a limb or weapon.

When you are tackling an Abductor the rest of your squad can join in to help you, either distracting the Abductor or healing you. Should you be successful in bringing the Abductor to the ground you’ll all charge in and give it a good twating before it can get back up.

The action in this game is very enjoyable and quick paced, particularly when facing one of the large Abductors. You are also given a large range of customisable weapons and outfits allowing you to really make your character unique. Outside of the missions the pace of the game slows somewhat and there is a menu for everything. There is also an odd base building aspect to be found here, where you can chose what buildings to create in order to help you in upgrading your weapons and character. 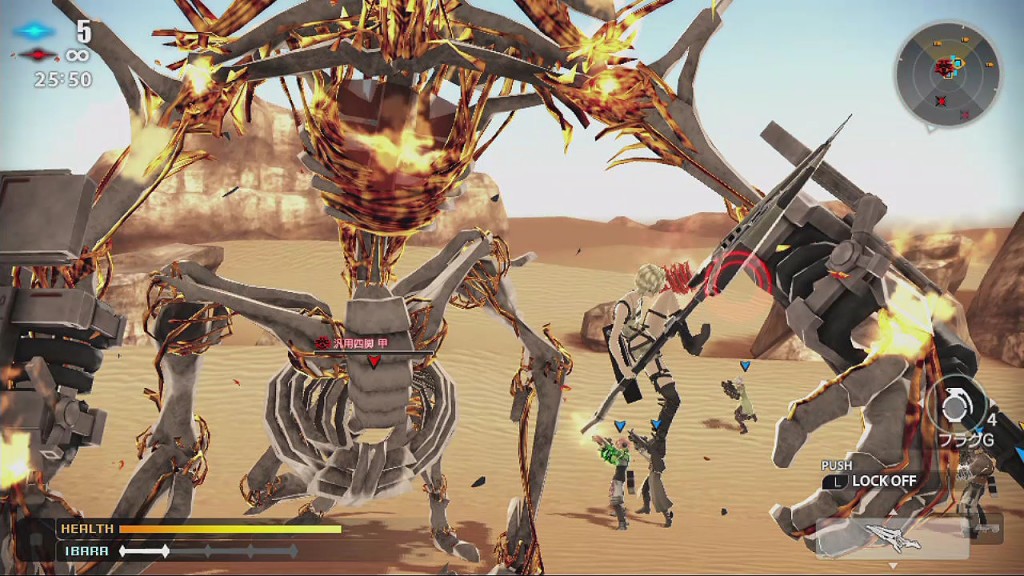 However given the fact you need to earn your right to do almost everything in this game it can sometimes become frustrating as you constantly need to unlock more privileges in order to fully explore your options available to you. Everything outside of your missions is completed through dull menus, and the overabundance of these menus result in them quickly becoming a chore to navigate.

There are some nice additions to this game such as the way your sentence is displayed above your head and how you have to provide your fingerprint by touching the screen to accept official documents.

Also you are able to see a league table of the global Panopticons, seeing which ones have donated the most. This adds a nice touch as it gives your individual missions a place in the larger wars being raged.

Overall then this Freedom Wars offers some decent action and an engaging if somewhat frustrating universe to play in. The customisation options on offer allow you to express yourself and the inclusion of the Thorn weapons make this game stand out from the crowd. It’s an odd mix of action and RPG but manages to pull it off pretty well.

Freedom Wars
7 Overall
Pros
+ Lots of fun using your Thorn to pull down the giant Abductors
+ Decent online game to be found
Cons
- Action outside of the missions gets bogged down in menus
- Frustration in having to unlock some actions
Summary
Overall then Freedom Wars offers some decent action and an engaging if somewhat frustrating universe to play in. The customisation options on offer allow you to express yourself and the inclusion of the Thorn weapons make this game stand out from the crowd. It’s an odd mix of action and RPG but manages to pull it off pretty well.