Music Racer Ultimate is a rehash of a prior 2020 PS4 release by Abstract Art, that port being down to publisher Sometimes You and Light Road Games. The idea is that you can play using your own music to generate your own unique levels. At least that’s the idea. Sorta like Vib Ribbon on the original PlayStation, only without music by Laugh and Peace.

The problem is down to the fact that to actually do so, you have to set up a WebDAV server on your local network. We tried but our Windows 10 PC was fine to set it up, but no good for allowing access via the firewall shit. So instead we stayed with the default tunes available. 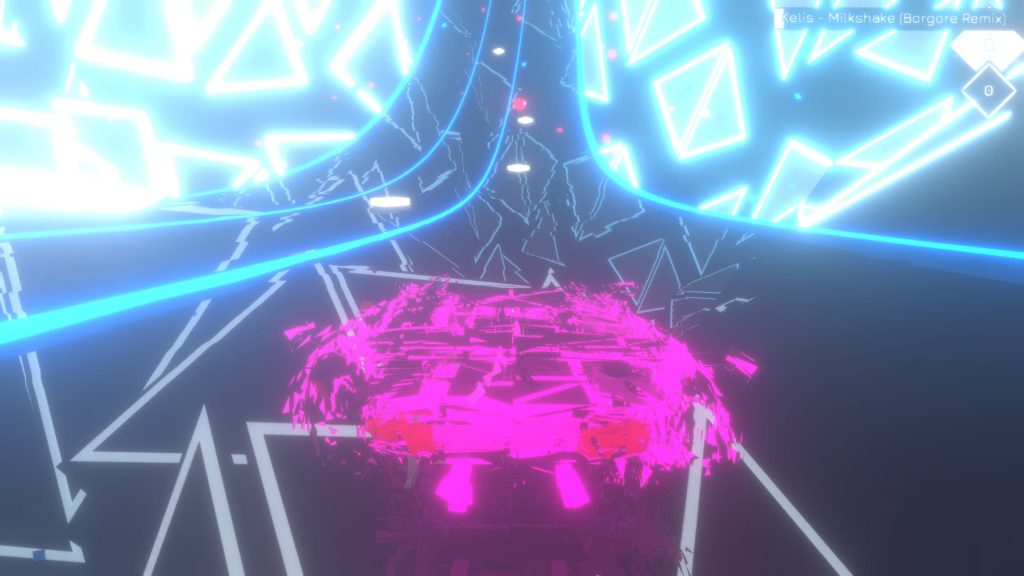 There’s another option too, some sort of indie Spotify-analogue called Audius. Though all that serves to do is make us wonder why there’s no actual Spotify integration. Back in the day we’d have expected to perhaps plug our iPod in and access the library, but that ship has somewhat sailed.

The Audius option sheds a little light on possibly why Spotify isn’t on the cards here. Music Racer Ultimate appears to locally cache music as MP3 and then use that to create a track for you to follow. Were this a couple of generations ago, we’d expect CD audio integration but the bloody PS4 doesn’t support audio discs either. Shut up, we like our media physical. 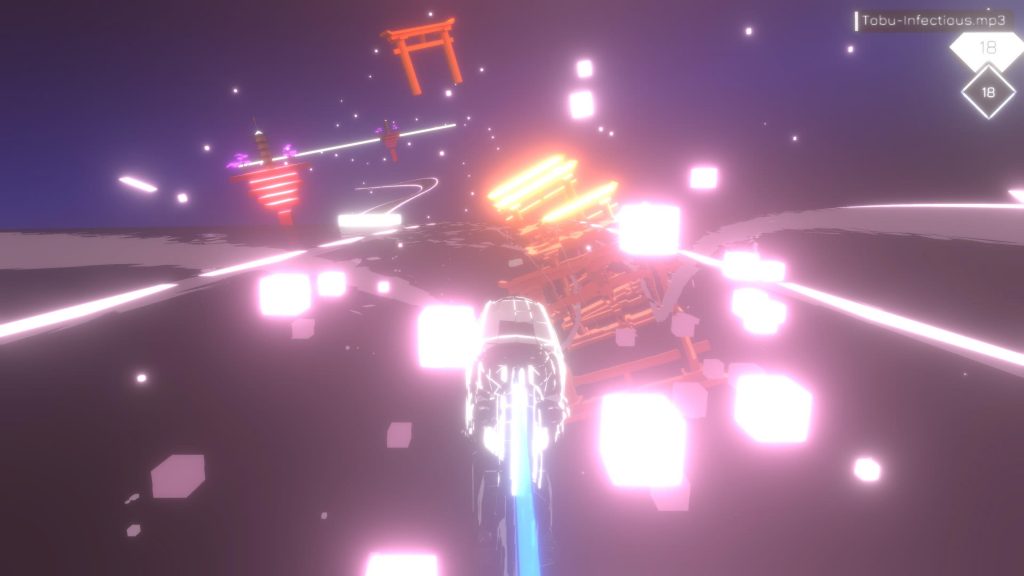 Thankfully the built-in tracks from the half dozen indies are pretty good and fit the general dreamy synthwave aesthetic quite well. Or at least they would do if you had a bit more of a user friendly interface on offer. You see, apart from the top right corner showing the track name during an event and the post-race summary you’ll be hard pressed to remember which track is which. We kept going back to a drum and bass track though. There’s no preview before doing the track in question either.

Gameplay is best described like venerable old PC game Audiosurf, only with unlockable tracks and vehicles. Or travelling into the screen like Rock Band or the Guitar Hero games. Except rather than tapping a button to correspond with one of the three lanes, you simply tap left or right in the standard control scheme. This has the unique effect of making Music Racer Ultimate entirely playable with the d-pad and your left hand while drinking the beverage of your choice with your right. We’ll have a cup of tea thanks. 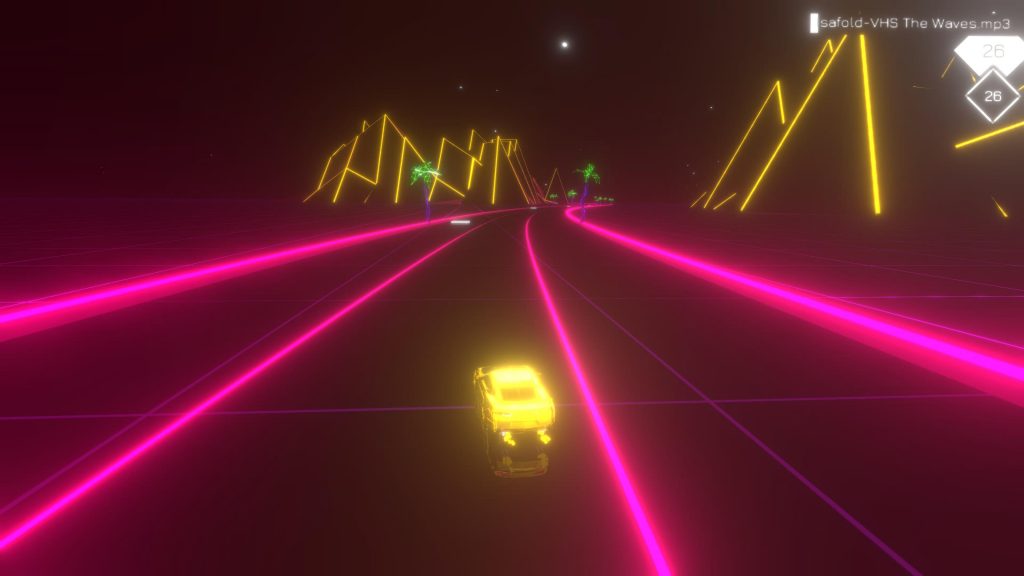 As the music tempo changes, so does the speed of your car. For the most part it’s a nice sensation, especially when coupled with controller rumble. It becomes a distinct problem when you encounter the occasional obstacles and hence the combo system. You see, when you hit the obstacles, often propelled into them by an acceleration, your combo resets. Fair enough, you carry on. Only the scoring when you finish a run is determined by the number of notes you’ve collected added to the current active combo.

It’s the game scoring analogue to pitching a no-hitter like amazing ’80s pitcher Dave Stieb only to have your pitch break into the outfield off a divot and bust your perfect game. This feels like being the best pitcher in the AL by a long way but passed over for a Cy Young nomination over and again in favour of a flashier yet statistically inferior player on a team that doesn’t have crap batters. Bear with us, watch this video and you’ll understand our rambling train of thought. It’s amazing. Now you understand. 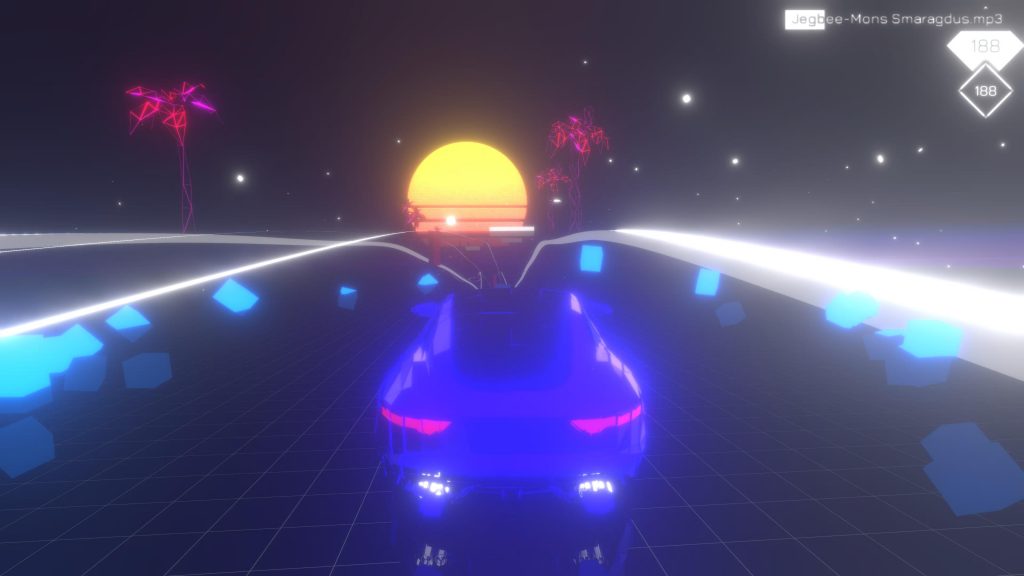 In effect, you can near-perfect a level but if you hit a combo breaker, get next to fuck all for your combo bonus. It’s really shit. Why not the biggest combo you had during a run? It isn’t so bad when you only need to accumulate five thousand points for your next unlock. But when you get into the vinegar strokes and need a hundred thousand points for the most expensive vehicle remaining, it’s as welcome as a Gran Turismo 7 server outage.

Coupled with the fact that the more complex levels have undulations that make the combo killers leap out at you with alarming ease. You’ll find yourself unlocking levels and playing them a couple of times to enjoy the show, but you’ll inevitably return to the flatter levels so you stand a chance. 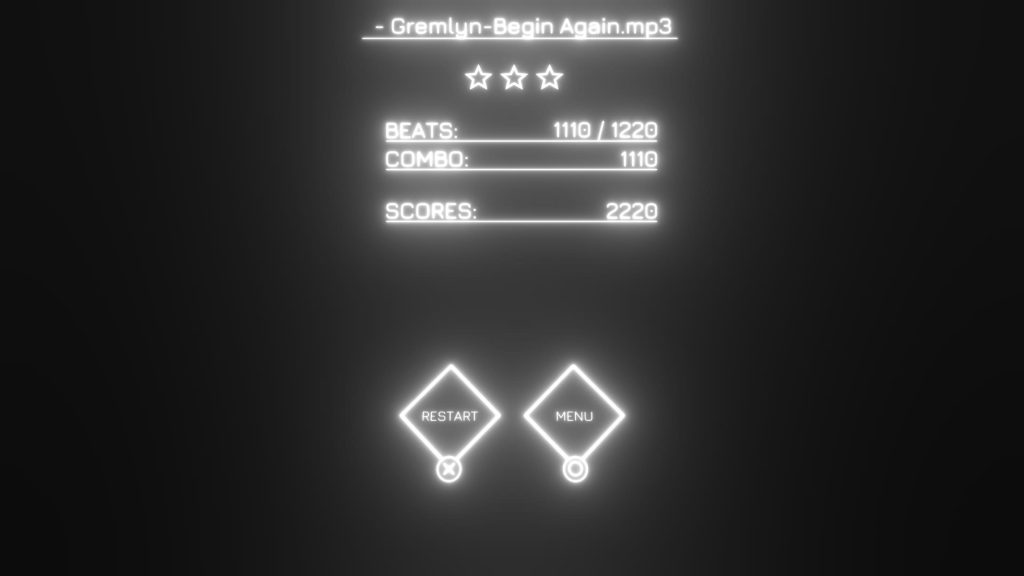 Other daft little things niggle with regards the UI. Your progress through a stage is shown by an indicator in the top right of your HUD. It’s just far enough out of your preferred cone of vision that a single glance in its direction can be enough to mess up your run. It’s a shade annoying.

Another annoying little usability issue comes to light when you pause the game for a breather. Somewhat counter-intuitively, to us at least, we found ourselves inadvertently quitting out to menu on multiple occasions without warning. Our mistake was tapping

it seems, when we should’ve tapped

instead. No prompt exits to menu are never welcome. What Music Racer Ultimate does right when you exit correctly is to count you back in with a little timer. 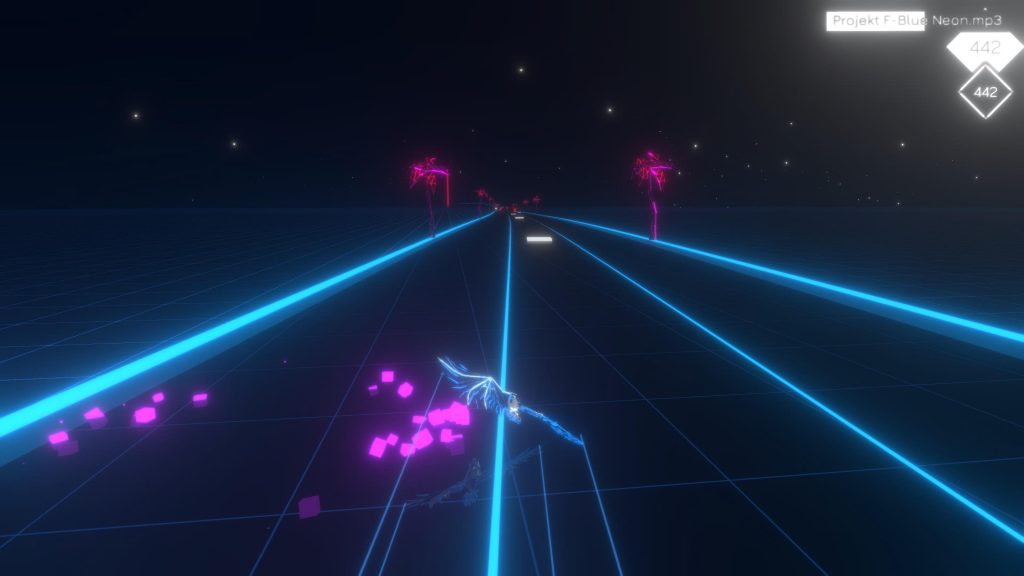 Ultimately though, Music Racer Ultimate is fun enough but is let down by the combo issue and the fact that connecting to your music collection is a ballache of sorts, though that’s exacerbated by our not being that arsed. Not having Spotify integration given its prevalence is a bit of a baffling omission, but as we surmised it’s probably a technical reason.

Music Racer Ultimate
6 Overall
Pros
+ Nice synthwave aesthetic
+ Included tracks are pretty good
+ Playable with one hand (shurrup)
+ The unpause timeout is a nice touch
Cons
- Combo scoring is terribly implemented
- Connecting to your own music collection is overly fussy
- Daft UI issues
- No Spotify integration is a bit baffling
Summary
Music Racer Ultimate is a fun enough diversion but the combo scoring is shocking and the fact you'll likely struggle to listen to your own music unless you're persistent. No Spotify integration will be an issue for many.