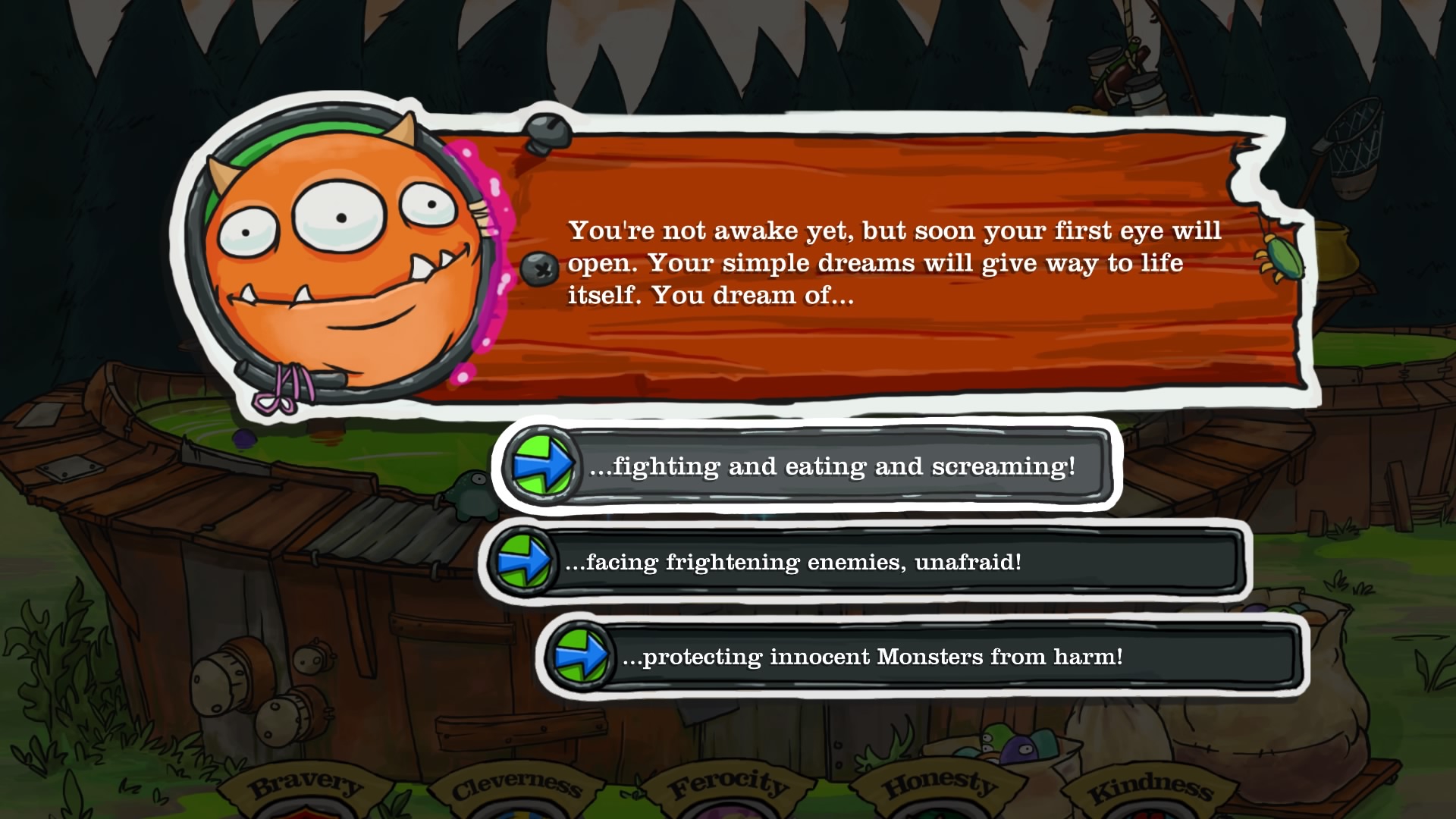 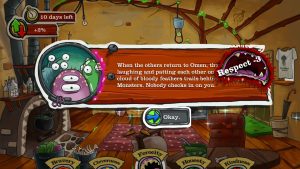 Once again we have an interesting release for the PlayStation 4 in Monster Loves You! Originally released in 2013 and on ever platform under the sun what we’ve got here is a visual novel style game. The aim of the tale is to shepherd a monster from birth to death, and guide the monster community as a whole.

As with previous visual novels I’ve played interaction is pretty much non existent.  If you want to you could fly through the game just hammering the X button and get to an ending in around 5 minutes.  So taking this into account Monster Loves You! is a game you really shouldn’t rush through.

The game progresses through all the stages of a monsters life, from a baby blob to an elder of the tribe.  Each stage of life presents opportunities to guide your monster’s personality across stats such as bravery, cleverness, ferocity, honesty, kindness, and respect.  These opportunities are in the form of little story scenarios and are generally pretty well written, changing in tone and consequence to suit the situation.  What I mean here is that in the early teenage stages the scenarios are things like making friends or standing up for yourself, whereas the later elder stage covers more weighty situations about the monsters relationship with the neighbouring humans. 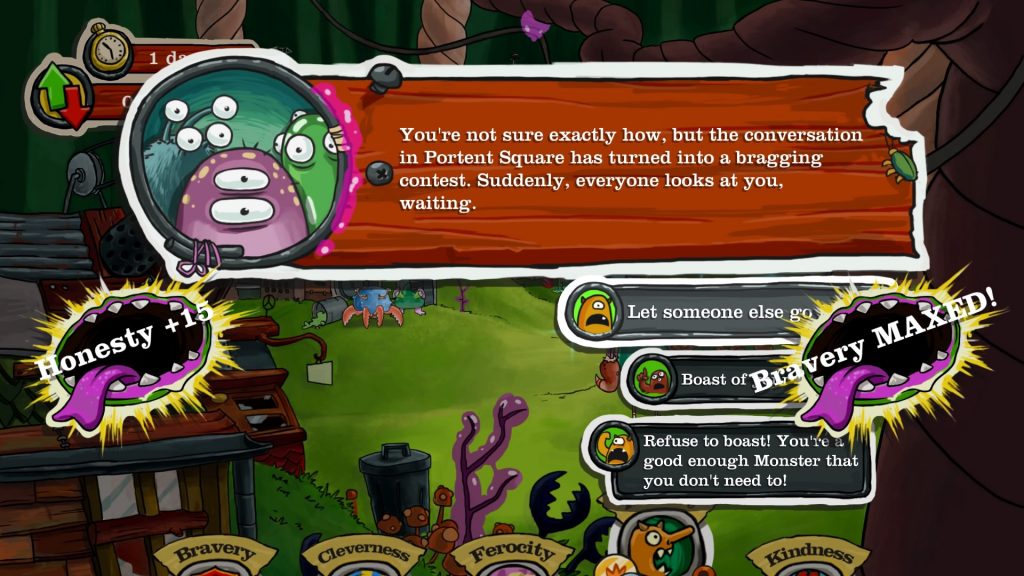 The game promotes itself as having over 900 of these choices available clearly showing that while the game may lack interaction it more than makes up for it in variety.  Some of these choices are dependent on your stats too which gives the game a lot of scope to replay in a different way in order to get one of the twelve or so endings.

For me a visual novel style game will live or die on it’s story.  Stuff like Steins;Gate has a really deep story full of drama and some really emotionally complex sections.  Code Realise Guardian of Rebirth goes for a more light hearted approach but still manages to give some emotional depth to the characters. Both of these games tell compelling stories over the course of 20 odd hours.  Monster Loves You! doesn’t manage to build a compelling reason for you to invest in its tale.  The whole story feels lightweight and disjointed.  Some of the individual scenarios are quite funny, riffing as they go from popular folk tales, but these never seem to join up to the overall narrative arch.  In fact the real narrative arch only comes to the fore in the last section of the game.  The options available to resolve the story are based on the stats obtained during the earlier sections, but this is really the only aspect which carries through. 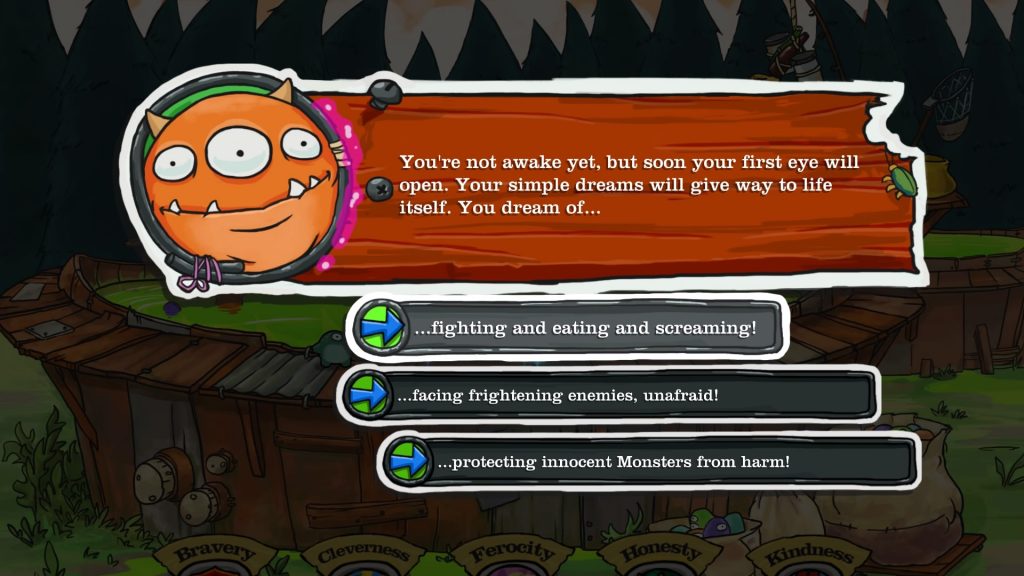 Visually things look fine with some clear 2D art on display, the music is also passingly enjoyable.  It’s a nice style which is bright and breezy to look at.  The DualShock 4 also gets a great work out with loads of sound effects being pumped out of the mic, it was a lovely surprise.  I did have some issues though with understanding the various icons within the game.  When the game is setting out to make you care for the stats being raised, the icons for the various scenarios don’t make it easy to guess which stat will be affected.  This was a little annoying.

I’ve seen this game being referred to as a visual novel for kids, and in some ways I do understand this given the fairytale nature of it.  However I’m not sure if this works in practice, as the amount of text in this game makes it unsuitable for the very young and once kids can read they’ll generally be wanting to play much more interactive stuff.  So I remain unsure as to who this game is aimed at. 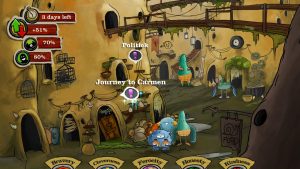 That’s pretty much all there is to Monster Loves You! then.  It’s a very short visual novel style game with a story which never quite hits the mark.  It does have a very pleasant style though and has bags of charm.  How much milage you’ll get out of this depends on whether your willing to replay for the multiple endings, but considering the brevity of the game you’re still likely to be done with this within a weekend.

Monster Loves You!
5 Overall
Pros
+ Nice art style + Great use of mic on the DualShock 4 + The individual stories can be quite amusing
Cons
- It is very short - The overarching story lacks any real depth - Even though aimed at kids the amount of text will make this unsuitable for none readers
Summary
Monster Loves You! Is a very short visual novel style game with a story which never quite hits the mark. It has a very pleasant style though and bags of charm. How much milage you'll get out of this depends on whether you're willing to replay for the multiple endings.