Monkey King: Hero is Back is the latest in a line of games based on the classic Journey to the West saga. Following on from the PS1 Monkey Hero and PS3 era Enslaved, those two being a couple we can remember. Only this time there’s no gurning Andy Serkis motion capture performance. Nor does Trippitaki hold you in direct thrall.

Monkey King: Hero is Back is an oddity by way of the circuitous route in which it reaches the western audience.  Originally developed by Sony Interactive Entertainment themselves for the Chinese market, it’s been left to THQ Nordic here. It’s almost as if Sony didn’t expect their own product to make any sort of splash over here. Sadly, this lack of expediency on Sony’s part shows a little in terms of some of the omissions and design choices. 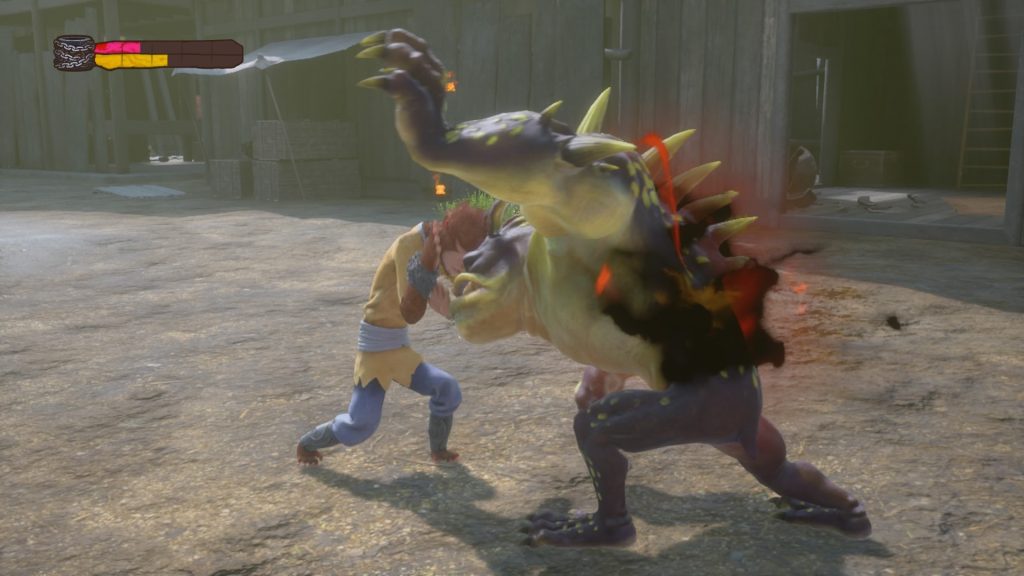 Based as it is on the 2015 CG animated film, the graphical style and music were produced in conjunction with the originators of said film, Oct Animation Studio. It gives the game a very definite visual edge along with beautifully evocative soundtrack. As we type this review, we have the game paused, it’s that lovely.

Monkey aka Dasheng aka Sun Wukong is released from a five-hundred-year imprisonment by a small child lost in a cave. That last name is his Buddhist honorific and Dasheng means ‘great sage’. Anyway, this child Liuer soon finds himself surrounded by monsters, so it’s up to you as Monkey to see them off. Most of your abilities are initially limited by the magical wristband, unlocked only by your efforts throughout the game.

Your mischief in past eras compels you to do good. By doing good, get red souls. In doing so, you gain the currency you need to unlock your previously gated skills. The first of which is entirely unlike Detective Vision from the Batman Arkham games. They’re kidding nobody, it’s a direct rip-off. It’s helpful in terms of finding collectibles at least and once levelled up a useful tool for spotting hidden enemies. You’ll get a feel when to deploy it, particularly in rectangular areas devoid of activity that might as well have a flashing red sign saying “hidden monsters here!” To avoid running your whole magic meter down you can cancel out of this mode when you’ve surveyed your surroundings. 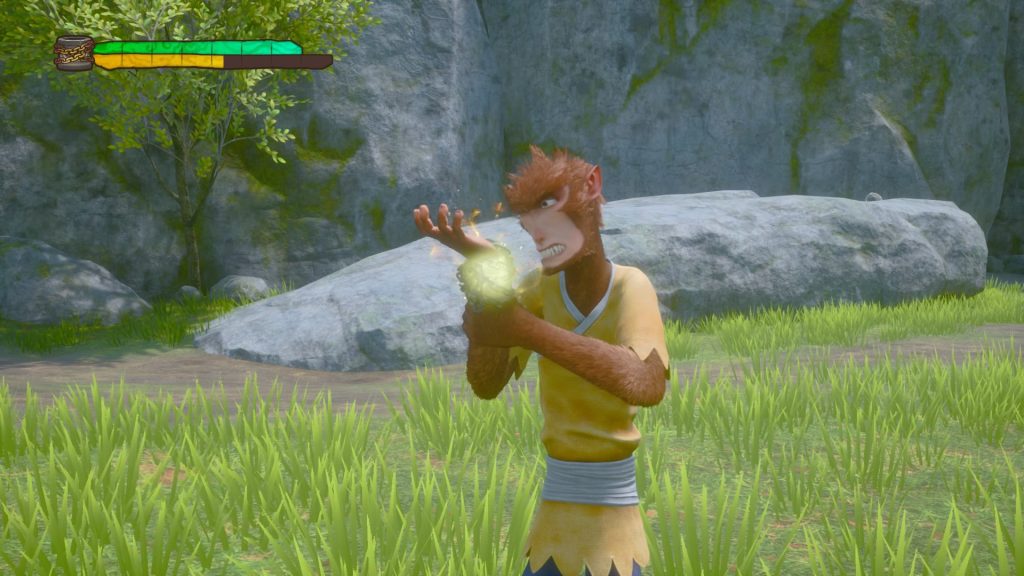 Back story is well filled out with scrolls you’ll find dotted around the environment, some giving hints as to how to face particular enemies. The otherwise inanimate conjured fighters can be disabled by plucking their enchanted scrolls from their foreheads for example.

Besides the items you collect from the environment to exchange for potions et al from the in-game shop, there’s hidden Earth Gods. These are hidden inside rings of earth, little pots and statues to name a few locations. They are essential in terms of your being able to increase your spirit, health and combo duration. They along with red souls and the ingredients for Madam Hare’s shop can be exchanged at the convenient one stop hub areas you’ll run across.

These hubs are handy but also a pain in the chuff. You can only save your progress manually at goddess statues, these being placed too infrequently. We had one long sequence of exploration and tricky combat we had to redo due to a game ruining bug. Don’t try taking screenshots during while in fights if you haven’t saved recently, put it that way. 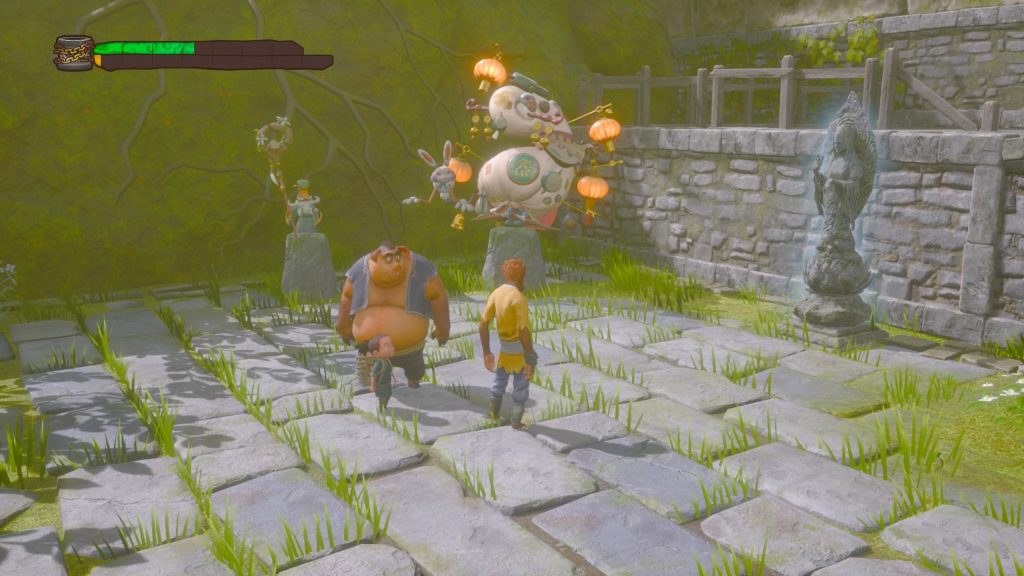 We didn’t relish having to replay that whole area all over again, but we had no choice. Annoyingly, if you die during a fight your progress is checkpointed. But it’s only a temporary save state and if you encounter a crash like we did you’re shit out of luck. Well not so much a crash as the UI overlaying a handy white screen. Either way, manually closing the game via the XMB was our only approach.

Given this is an adaptation of a game previously released in China, it’s a little baffling to us the only available audio track is fully English. The lip sync is clearly still Chinese so it’s a shame it’s not included as an option. It’s not so bad when it comes to Monkey & Pigsy. It’s the child who is voiced by someone who’d sound more at home on countless identikit kids TV shows on Nickelodeon et al. This is a really jarring bit of casting that jerks you out of any immersion you might feel. This is exacerbated further still by every time you encounter an enemy. He exclaims “Monster!” without exception, never mind you’ve already clocked them. It’s more than a bit annoying.

The collectibles are the Earth Gods, flora and fauna from the environment and drops from enemies. The standard mobs drop items that are usually used as reagents in at Madam Hare’s emporium, but occasionally you’ll happen across small but hostile rare insects. They don’t hang around very long, so you have to unload on them quickly before they do. Once they flash brightly you have a limited window to finish them with a heavy attack and get a valuable Rare Insect Stone. These give you the opportunity to craft Spirit Crystal Petals that give you an immediate red soul boost upon redemption. 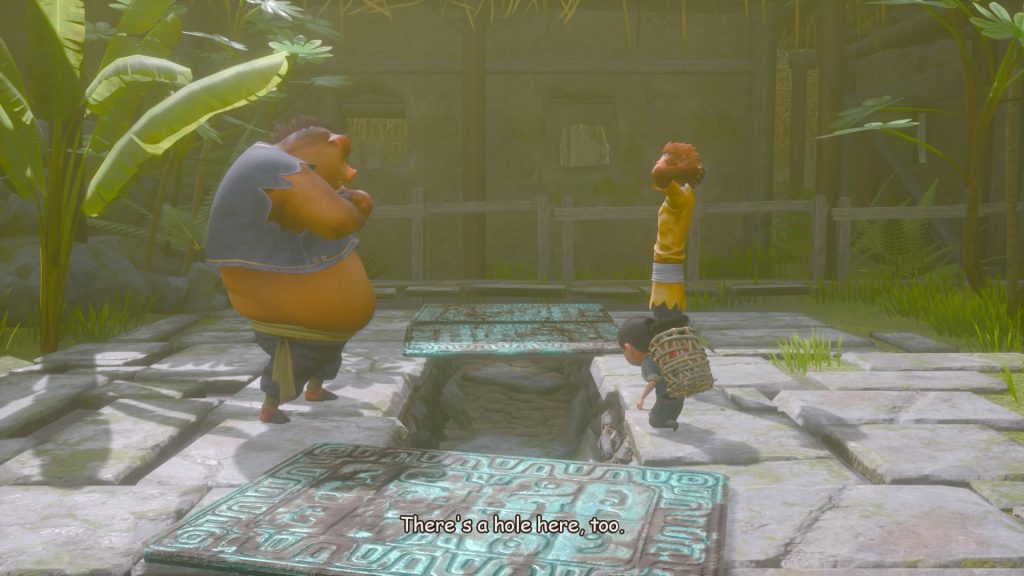 You can gain additional items by sending Lieur down tunnels too small for yourself or Pigsy to navigate. One sequence through a village has you sending him down what turn out to be dried out latrine channels. It’s grimly satisfying given his irritating nature. Monkey has a nice line in idle animations, soon lapsing into a slouch and yawning if you leave the controller untouched for anything longer than a few seconds. Pigsy also tries chivvying you along if you hang around too much.

The combat is  generally well done with standard attacks mapped to

and strong attacks mapped to

. There is considerable heft to your attacks with satisfying visual and auditory feedback. Tougher enemies require outflanking as well as deft use of combos to take down quickly. You can also pick up rocks and in certain circumstances perform one hit kills on lesser enemies. Using extra items like this is often key to defeating the larger enemies. Occasionally you’ll defeat an enemy and send yourself into a frenzy mode of sorts, this coming in very useful during battle with lots of enemies around. What slightly breaks the experience is the fact you have to pause to use consumable items. It’d be handy if you could use an item while in combat. It’s not like the Dualshock 4 is particularly short of buttons to use. Every so often you’ll get lucky and find a power crystal that sends you into a limited time frenzy where you can lay the beatdown on any remaining enemies. It’s great fun to give them a good shoeing, but we kept getting them on the final kill in a skirmish. 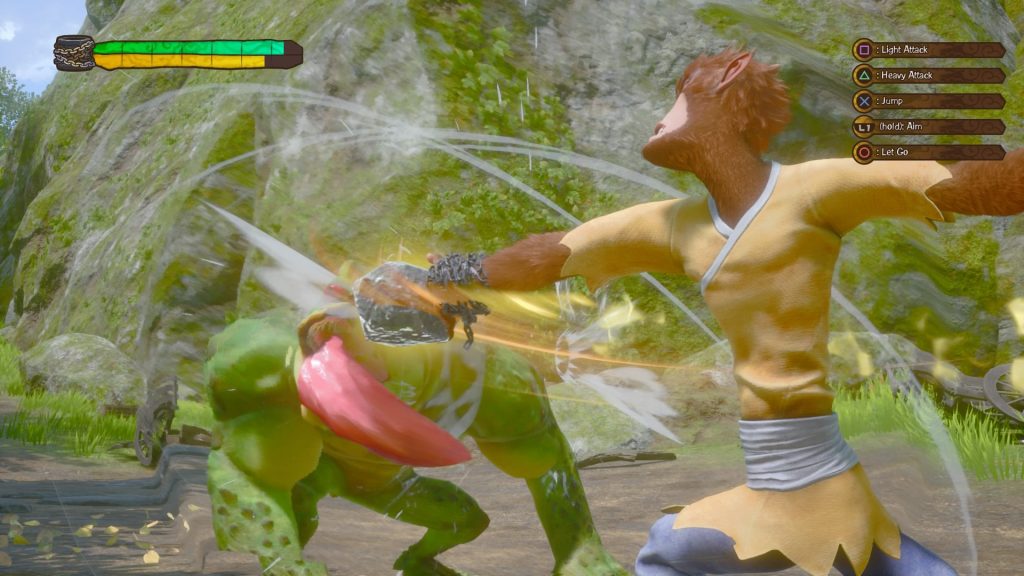 You can sneak up on unaware enemies by holding down

and perform stealth attacks. On weaker enemies this can make for an instant kill, on those a little harder you can still take off a hefty chunk of health. In the case of scroll enchanted enemies, you can get rid of them without their aggroing you at all if you avoid their field of vision. Every so often you’ll trigger a short QTE in a fight, be it to perform a counter or similar. One pesky character steals your energy and you have to wiggle the thumbstick as well as hammer a face button to escape. You’ll learn to throw rocks at this particular mob to avoid getting to this stage, they’re that annoying. Some boss fights have a similar mechanic, in one instance against a rock monster.

When it comes to other negatives, they are few. Some areas need you to jump from one roof to another, but ill-defined edges make some jumps harder than they should and you end up on the ground. It’s annoying once, but several times it gets old. Also, the camera can be wayward, but only generally in enclosed areas. One odd thing in terms of traversal, you can run around to your heart’s content but when it comes to ladders you get a canned animation. It’s a bit weird, even on minor changes in height. Talking of such, you’ll often be the only person able to access an area to begin with, having to open a path for your companions. 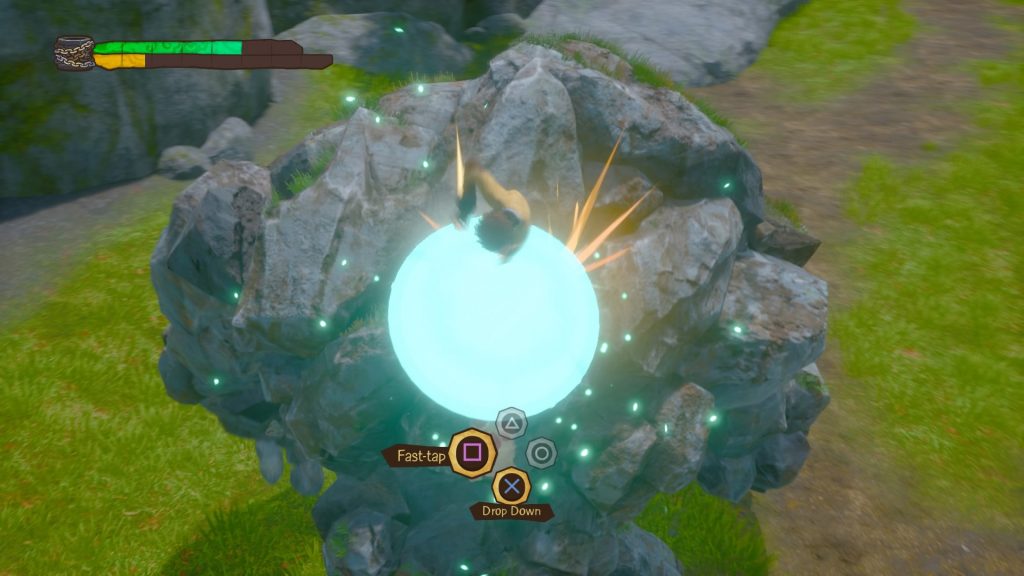 You can access a map by tapping the touchpad, it’s not something you’ll use all that often but some early levels particularly come over a bit too sprawling. Also you can spot what what you might think is a little alcove with loot but upon trying to explore a little extra you get pulled back by a canned animation and lightly scolded by Pigsy for going off piste. Why include little areas but have them out of reach? Make them obviously impassible. As well as the generic kid voice actor for Lieur, the subtitles are in Comic Sans. The font so beloved of Geocities homepages circa 2005. We half expected a visitor counter and marquee scrolling text too. It’s all a bit jarring and comes over a bit sloppy.

To conclude, Monkey King: Hero is Back is a great action adventure with a few rough edges. It’s well worth playing despite the flaws it has. We just wish the original audio track was available as an option and that kid would shut up shouting MONSTERS! We’re looking forward to playing this more once peak review season has eased off a bit, put it that way.

Monkey King: Hero is Back
8 Overall
Pros
+ Graphically & sonically beautiful
+ Combat and spells have satisfying heft
+ Collecting your own ingredients for consumables gives nice agency
+ QTEs aren’t actually that irritating
+ Voice acting mostly good
Cons
- Some levels are just that bit too sprawling
- Manual saves can lead to big chunks of lost progress
- No original language audio option and Comic Sans for subtitles
- Occasionally fussy platforming
- Camera angles can go awry
Summary
Monkey King: Hero is Back is a good action adventure based on the successful CG movie made in conjunction with the movie's producers. High production values are tempered slightly by sloppy execution.

3 thoughts on “Monkey King: Hero is Back – PS4 Review”