We knew as soon as we saw a gameplay trailer for Milo’s Quest that it was the work of lightUP AKA Juliano Lima. Very graphically similar to his previous games Wiloo and Box Land, Milo drops the Super and Demake prefix and suffix. For illustrative purposes, Super Milo’s Quest Demake would be nonsense wouldn’t it? So we should be grateful for the brevity  afforded by lightUP in this instance.

Unfortunately the plot, such as it is, is complete nonsense. Milo is a cute dog, he finds a bone. But it was a cursed bone? Milo freed the Evil King Old Skull apparently. Righto. The king’s minions are the ghosts that now bedevil the land.

This translates into a puzzle game, very similar in gameplay to Super Box Land Demake. In fact, were it not for the attacking ghosts and boss fights, Milo’s Quest could well be seen as a rehash of the earlier game. 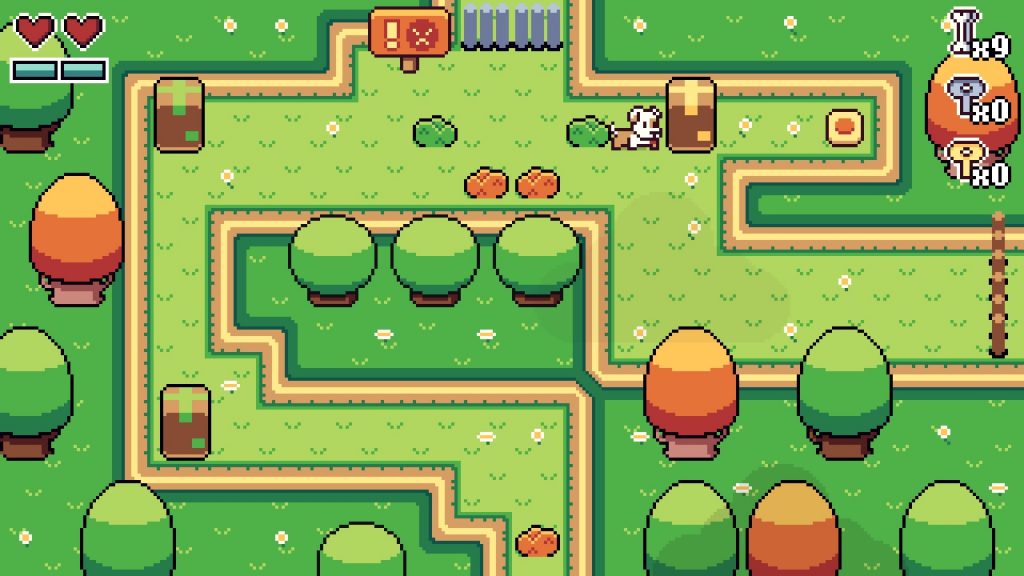 Milo loves bones as has already been established. They are collected as you solve some basic box pushing puzzles, providing your primary currency. They are used for unlocking health and stamina upgrades as well as accessing the odd key.

Gold keys unlock treasure chests and grey keys unlock gates. It’s a simple enough formula, though to this reviewer at least, the second wasn’t quite so obvious. It seems daft having got the double platinum now, but at the time there being no particular guidance that the grey fence was in fact a gate. Confused further by the fact there was a gate at the bottom of one screen with a keyhole shown on it.

As you proceed you’ll unlock items that allow you to negotiate the cursed world that bit easier. Only barring the gloves (for shifting boxes) and football helmet (for performing  a rushing attack) they’re functionally useless. You’ll find binoculars upon beating the first boss, ostensibly used to survey levels. In practice the levels are simple enough that you won’t need them. 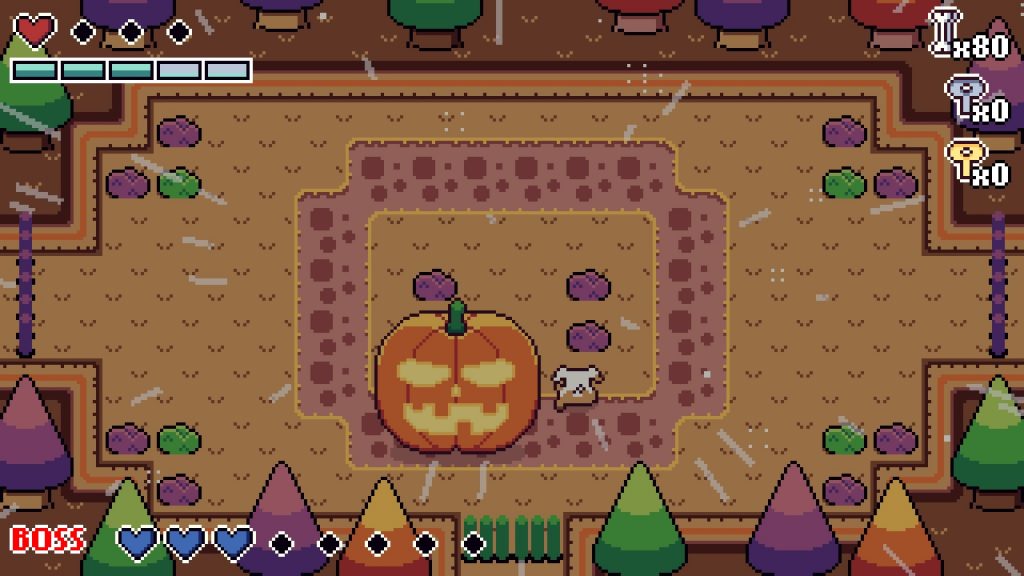 When you beat the second boss you’ll unlock glasses that reveal secrets along with the remaining three trophies for the platinum. Only we carried on playing for a good half hour and we didn’t see any discernible application of the item. The pause menu seemed to indicate the ability it unlocked was passive, but it’s possible a button needed to be pushed to activate them.

Going back to the useful items, the football helmet is your offensive weapon to attack ghosts. By doing so you’ll gather more bones and unlock purple gates that would otherwise impede progress. Kill all the enemies on a screen and you’ll open the gate.

All well and good, but the imprecise manner in which you’ll attack means you can career into an enemy, miss and take damage. Combined with the punitive manner in which you’ll lose exactly half your bones upon losing all your hearts, this can feel particularly harsh. Especially when you have to gather bones to unlock gates to other areas. Maybe capping the amount of bones you lose would be better. In addition, if you barge into two adjacent enemies, you’ll damage one, but take damage from the other. It’s a crap implementation if we’re honest. 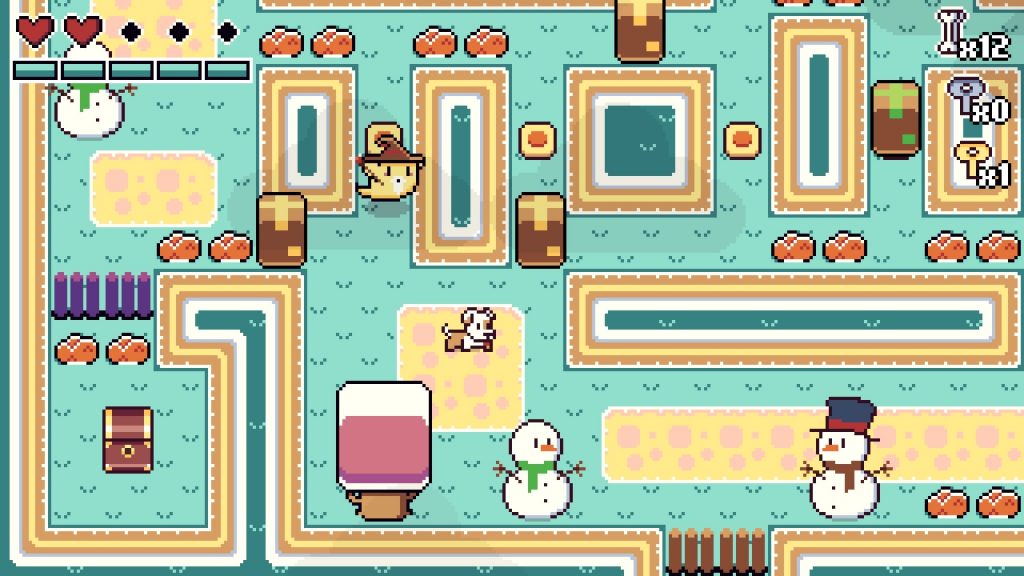 Enemies have a tendency to lurk behind scenery such as waterfalls and trees so you can come unstuck on that front too. Never mind that a screen respawns all the enemies when it reloads if you exit by mistake (this happens easily with the rush attack) or lose all hearts. On a screen with a big payload of enemies it feels like unnecessary makework.

As is the usual norm for Ratalaika releases, there’s PS4 and Vita versions bundled. The Vita version works better as the d-pad seems to cope better with the pernickety precision required. Some areas have paths that you have to be lined up with perfectly to get through. Almost to the pixel in fact, there being zero margin for error.

This is fine if you can butt up against a wall, but when you have to line up by eye in the middle of a row, it sucks. The precision needed is like trying to select an image for cropping on a laptop trackpad in an earthquake. 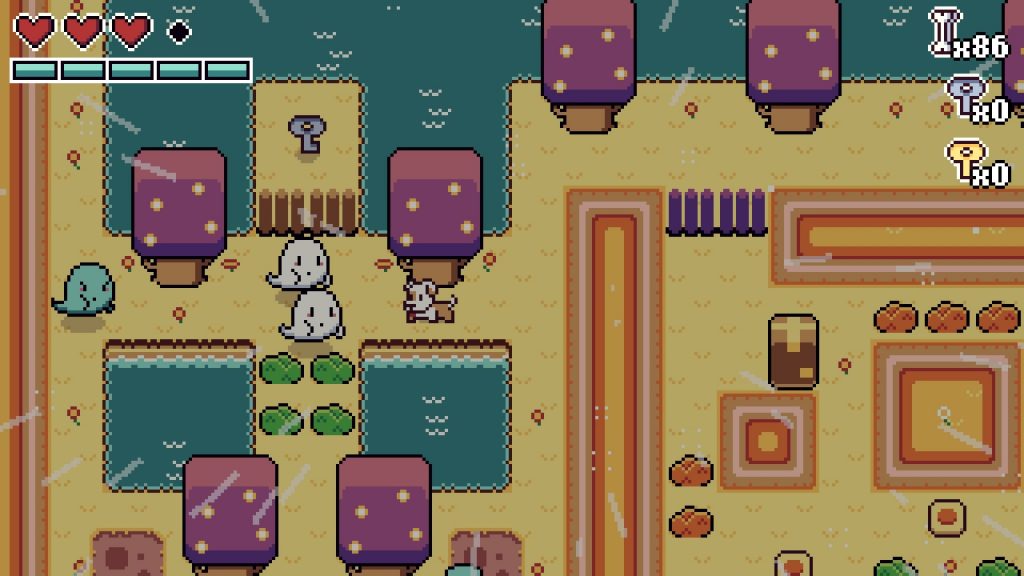 Finally, there’s a lot of back and forth required to get keys etc, especially the further you progress in the game. But there’s no ingame map so you’ll be wandering around aimlessly a fair bit. The tile layout wouldn’t be too hard to map, even if it just showed where chests or gates were.

In conclusion, Milo’s Quest is a typical Ratalaika-by-numbers effort with a straightforward double platinum. It plays a reasonable game but combat and movement is fussy and, on occasion, frustrating. Once you’ve got the platinum trophy after the second boss there’s also little impetus to continue. It becomes boring far too quickly.