It Came From Space and Ate Our Brains is a top down, twin stick shooter from Polish developers All In! Games.  As you can probably guess, it has you facing off against hordes of aliens during an invasion of Earth.

You, and up to three other players if you play in split-screen local co-op, start with a basic pistol on the rooftops in a city.  You press forward shooting aliens and destroying glowing boxes that offer power-ups.  At first there is just a trickle of enemies but eventually you’ll be fighting for your life, backtracking from aliens and trying to make enough space to destroy them before they get to you.

The aliens are glowing magenta creatures that mostly head directly towards you in as straight a line as possible.  The game’s levels offer a few obstacles with which you can try to get more distance from your alien oppressors but for the most part you’ll just be running to whatever part of the screen doesn’t have an alien there. 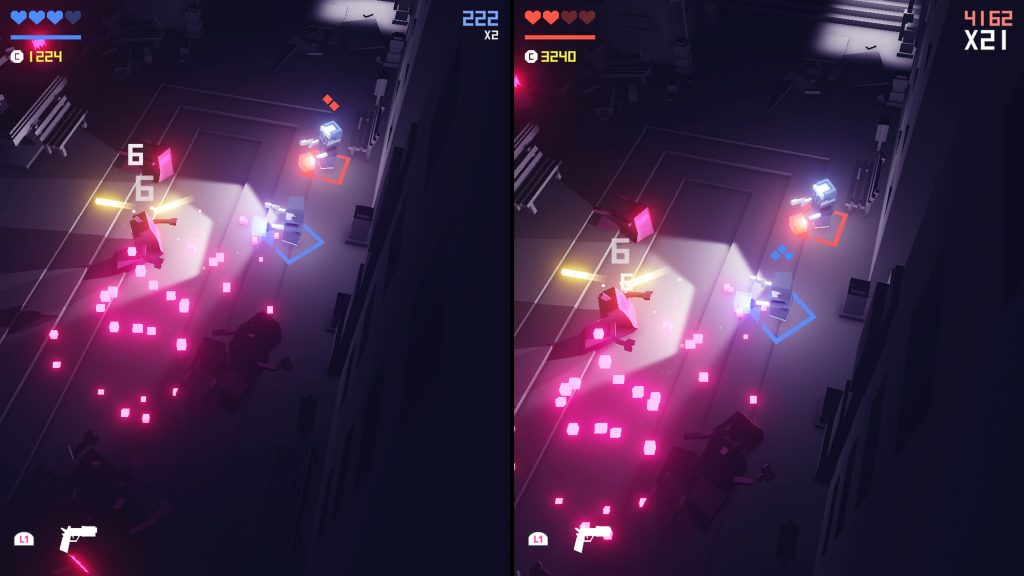 To even up the odds you get a choice of weapons to unlock with money that you earn from killing enemies or find in those glowing boxes.  There are six guns and these include shotguns, lasers and rocket launchers.  We found most of these to be a bit unwieldy and mostly stuck to anything fast firing but it’s nice to have options and you can further upgrade each weapon several times before you max it out.  Weapons and upgrades only last for that level though so when you break through to the next you be back to using the basic pistol.

You can also find temporary upgrades that give you one of the weapons full maxed out for a few seconds and secondary power ups such as shields, mines (mines are never good in any game), weird circling laser beams and a turret.  One annoyance, and in a game this simple there shouldn’t be any, you can only hold on power up at a time but the slots for power ups also hold medkits.  So you’re constantly having to waste otherwise useful medkits if you want to play with the fun stuff. 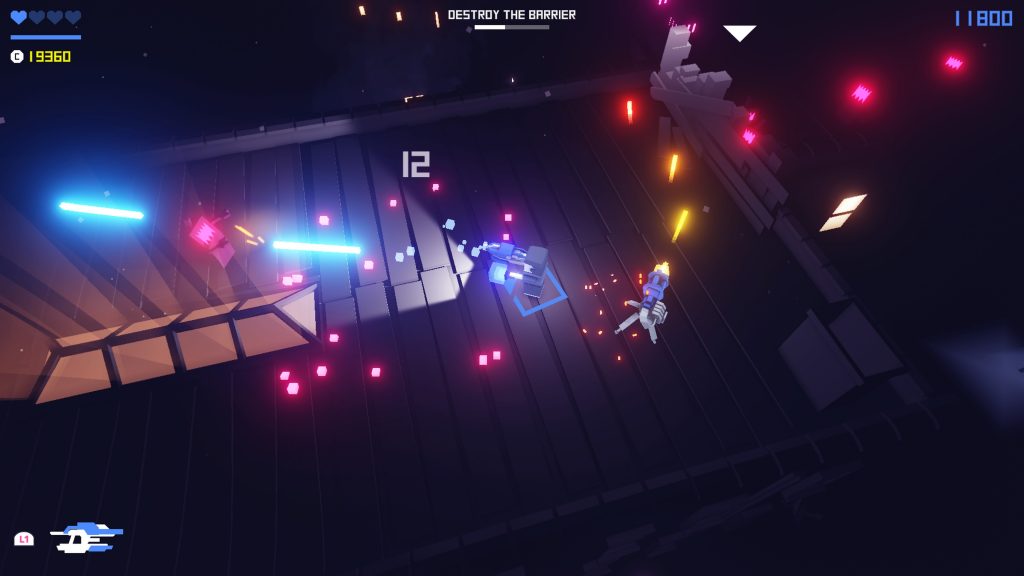 There are six levels – rooftops, clinic, alleys, sewers, riverside and cave – each locked out until you beat the previous one and these are all represented at night, mostly in black and grey.  Your player has a torch lighting the way ahead but this has limited range although it has to be said the lighting is actually pretty good in the game.  The aliens generally glow and so there are always bursts of colour which helps to make the game look more stylish but it does kind of make it a little harder to see what’s going on as well.  A few day time levels might have to helped to mix things up a bit.

Also, other games that use this blocky, voxel style look usually employ it to allow destructible scenery but that’s not the case here.  And indeed, some of that might have helped make the game a bit more dynamic and tactical.  Instead it just feels a bit flat.  Even down to the fact that the enemies just teleport onto the play area, so there’s not even any capacity for strategic play because an enemy can just appear behind you.  Their attacks aren’t fast enough to make that unfair but it does limit any requirement for planning and thought. 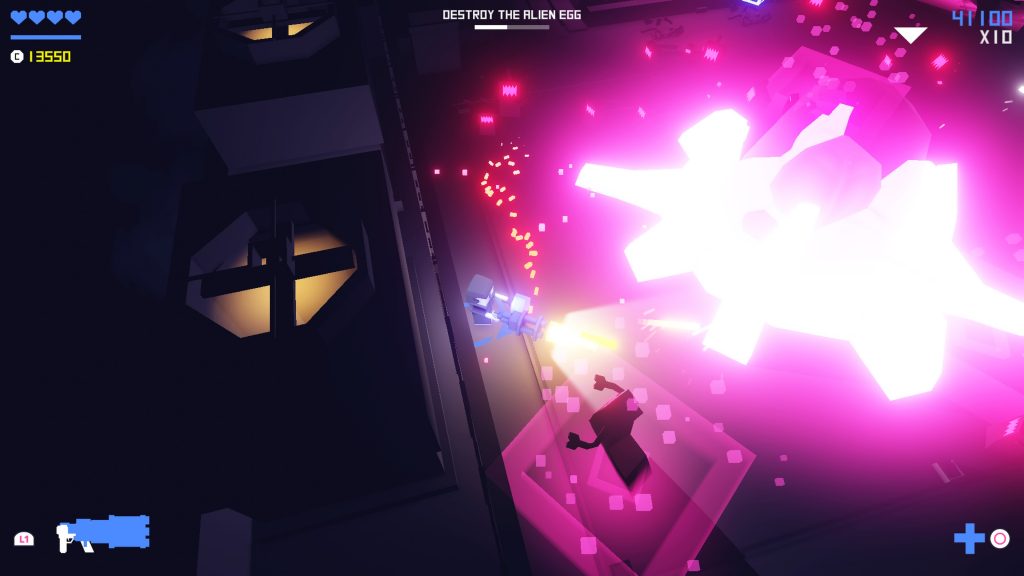 While it is fun to go around blasting enemies while getting lots of power-ups to play with, It Came From Space and Ate Our Brains does have issues.  Firstly, the game is a little slow.  You walk slowly, enemies approach you slowly.  This means you’re not really evading enemies with skill but rather just trying to do enough damage per second to keep them off of you.  That works fine in zombie games but here it just seems a little unexciting, especially as there aren’t really any massive hordes to deal with.

Also, each level feels the same to play and it’s all over after a few hours at which point you’ll not really have seen anything that interesting or done anything other than blast the same alien types.  Combine that with the simple, blocky visual style and it’s quite easy to get bored of the game.  It is improved by playing it in co-op (as is the case with most games) but the game only offers local co-op and as we always say with games like this, will your friends really want to play and obscure indie shoot ’em with you when they come over?  Probably not.

But, when you’re playing the game and making progress, it does offer some enjoyment.  While it may not be very inspiring, it offers solid gameplay and when the action builds up, which does take a while, and the game starts offering a bit of challenge then the game gets more interesting to play and more enjoyable too.  There are better twin-stick shooters, even if you categorise it by co-op, on-foot ones but It Came From Space and Ate Our Brains isn’t a bad one it just needs a bit more variation.  Visually, gameplay wise, in terms of the enemies.  But for a cheap run and gunner, this is okay.