I think losing my memory might be the one part of getting older that would terrify me. Reminiscence in the Night comes from Team Soletude and plays on those fears. What follows is a very brief narrative that maybe doesn’t quite hit the right notes about losing grip of the past. 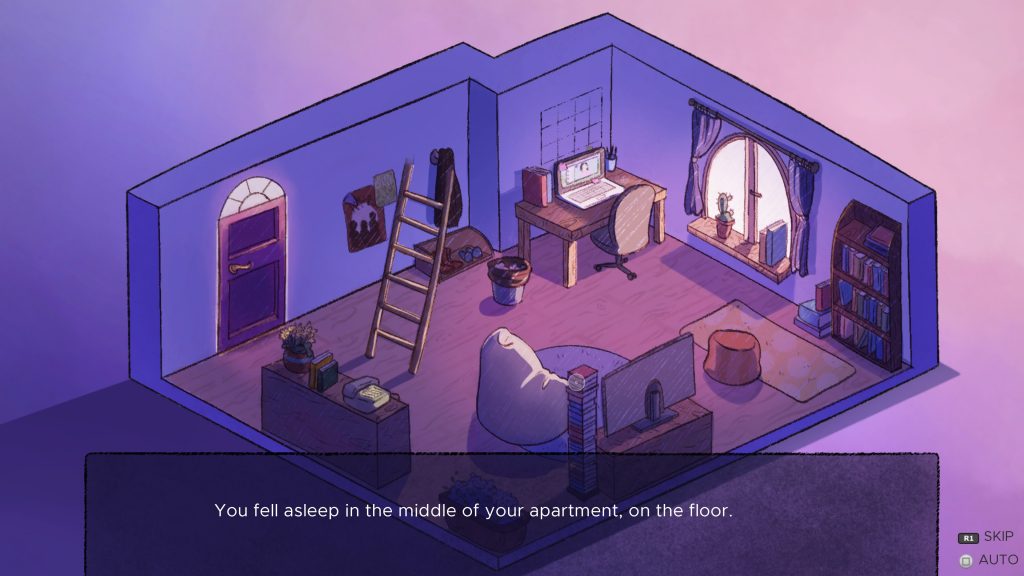 Reminiscence in the Night is primarily a game about losing one’s memory. The game takes place almost exclusively in a one-bedroom apartment. It’s a tiny setting but it’s presented in a nice isometric perspective. You have a phone and a PC for company and this becomes the main point of contact with the outside world.

Sophia is your friend from university who becomes your main confidant. She’s there to help fill in the blanks of your memory but can act cold and indifferent to her, if you wish. Your mother is a phone call away but she also appears to be losing her memory. Looking into a mirror in your bedroom also opens up conversations with your mentor. It’s another chance to find more stuff about your character but I don’t feel these relationships are developed fully. 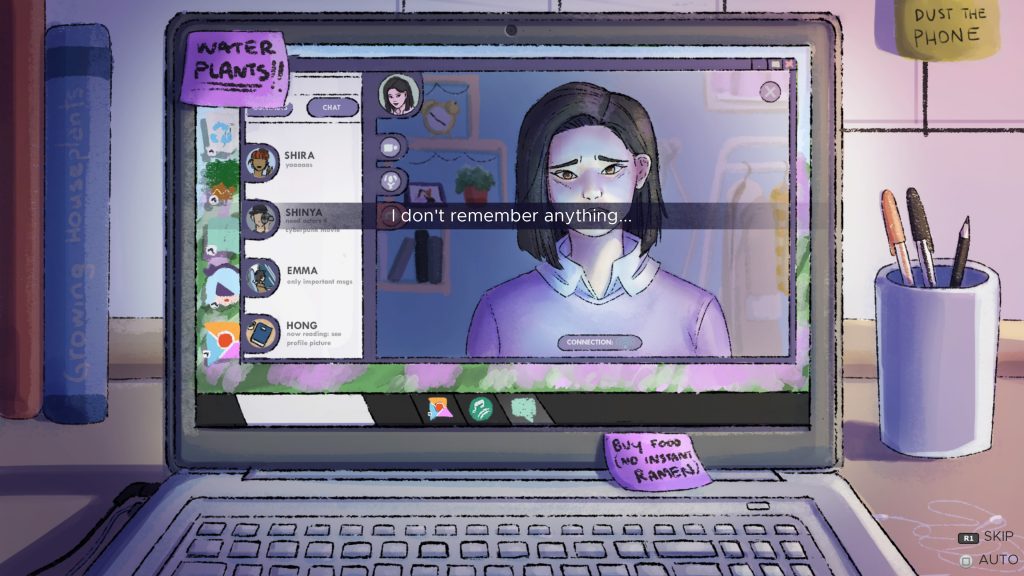 The whole game takes place over a few days with one of four endings coming in as swiftly as twenty minutes. In that time, you get a few scant opportunities to talk to the cast about your previous life. There could’ve been something interesting in a person piecing together their past but this is all over very quickly. Recovering your memory is more likely to be a long, arduous process. Unfortunately, this instance has everything resolved very swiftly. There’s barely any time to build relationships in a substantial way and it all feels incredibly rushed.

Initially, it’s treated with the grand brevity losing your memory should have. Your character is confused, scared it won’t recover but it’s also wrapped up this bleak tone that makes certain encounters feel otherworldly. On the one hand it’s appropriate but it seems so downtrodden and mopey that can make the protagonist feel very self-centred.  The post-it notes around the PC monitor imply this might be a more prolonged experience so maybe this narrative is more focused on the final stages. 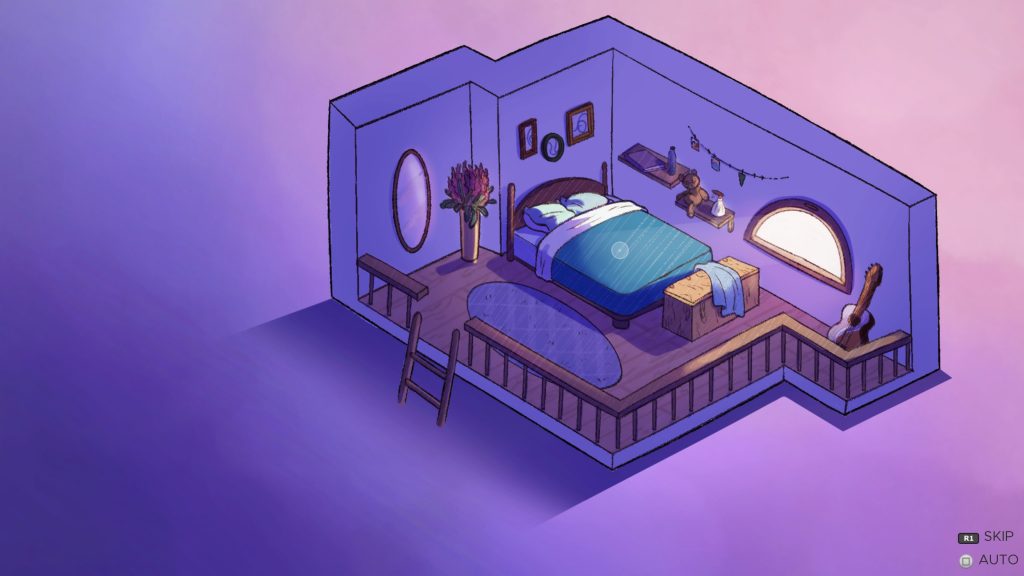 It doesn’t work for me. The story has the feel of something larger in scope that was ultimately confined into a tiny box. The four endings do pad the proceedings out but you’re still revisiting the same points, seeing the same people and having the same conversations. Replaying the game just reminded me how a journey was missing from the narrative and that none of it really mattered. There’s not a lot to talk about when nothing’s really being said.

I do like Reminiscence in the Night‘s look. There’s a lovely hand-drawn look to it with a pastille palette that works really well. The isometric perspective keeps everything you need on one screen and helps portray a person who is isolated and boxed in. The mirror world and nightmare sequences have a distinctive feel and it does at least give the eyes something harsher to view. The piano score nicely hammers home a brain struggling to get into gear.

With the short runtime, it is paced very quickly. The days can take minutes, even if you do decide to explore the room for changes. There are decisions to make which dictate your ending and some of the writing does try to be poignant and thought-provoking. The tone is very self-serious and takes the amnesia as the most important thing in the universe. 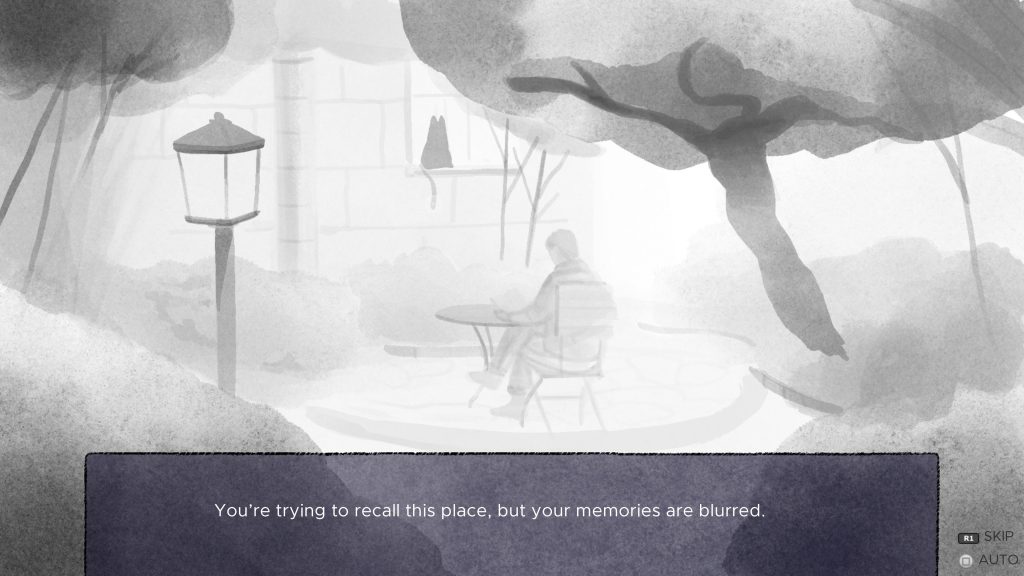 Your character seems to wander around the apartment in a malaise. There’s no connection to the media and books they own, no real empathy towards friends and family. Getting that past back should be a substantial undertaking. It’s certainly written as a world-shattering event. Unfortunately, I don’t feel the brevity is earned. Not when there’s so little time to play with. By the time you’re settling into a daily routine, the game is over.

I really don’t have a lot else to say about Reminiscence in the Night. Platinum hunters will probably rejoice at a simple effort but, as someone who wants a good story, I feel short-changed. The visual treatment works perfectly with the subject matter and the piano score escalates as the story moves on. It’s just a shame they don’t do more with the subject matter. It’s over before it gets interesting and It’s not something I can recommend.

Reminiscence in the Night
5 Overall
Pros
+ Has interesting, moody visuals.
+ Has a good piano soundtrack.
+ Moves at a swift pace.
Cons
- Incredibly short.
- Doesn't really take the time to develop the main character's condition and past.
- Doesn't feel like there's much of a journey here.
Summary
Reminiscence in the Night suffers from being an incredibly brief experience. With a fairly heavy-handed tone, not a lot is really done with the premise. It has a fantastic look and really compliment's the main character's malaise. The soundtrack stumbles as they try to regain memories and your decisions do feel impactful. It's just a real shame it's over before the game really plants its feet.