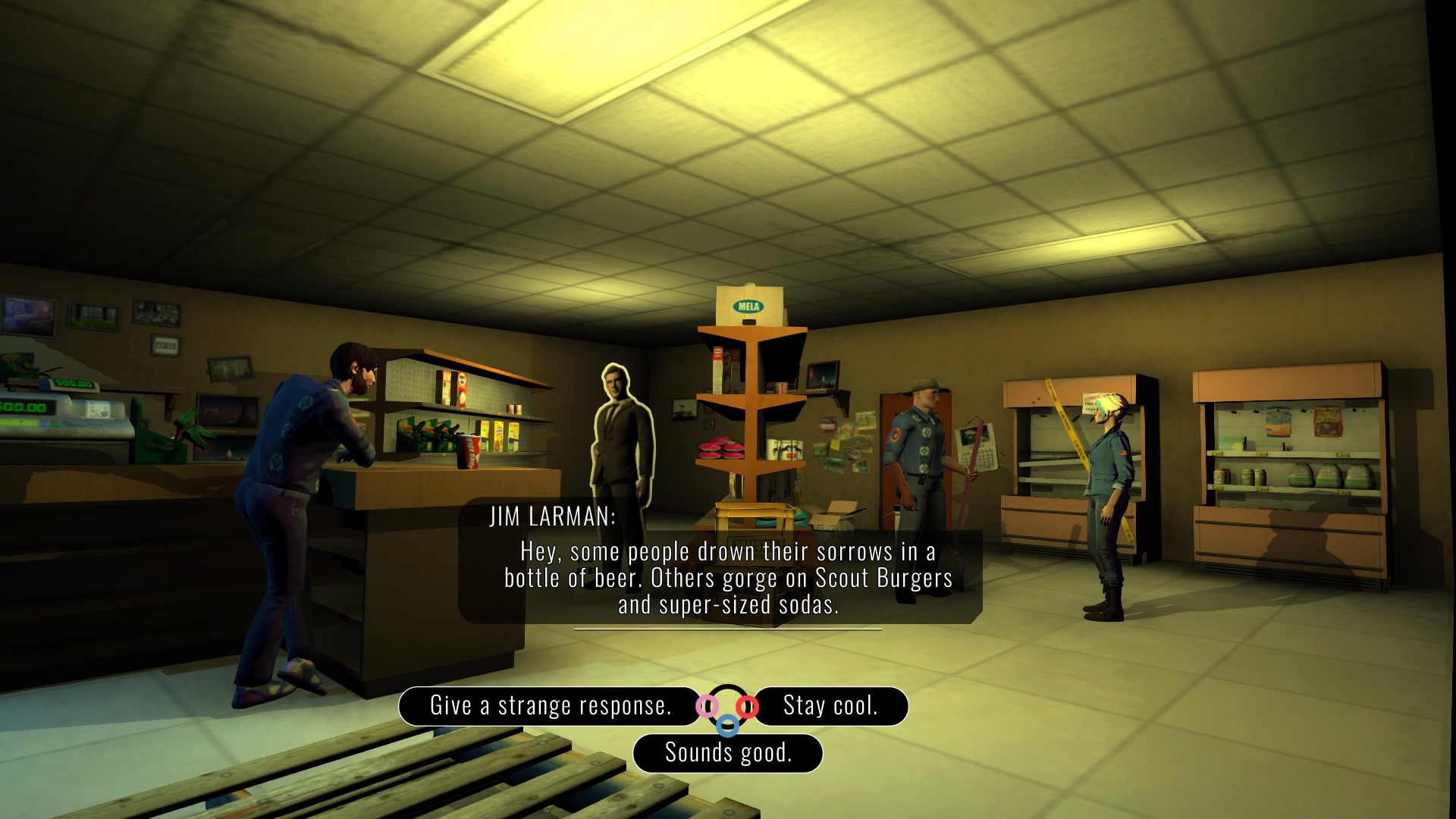 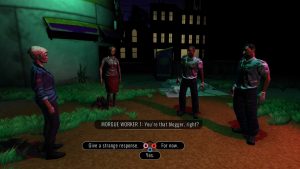 like a bit of a narrative driven game and am fully up for the whole range of the genre, from visual novels to the output of Telltale.  Knee Deep manages to pull off another way of doing a narrative driven game which is both unique and visually interesting.  Coming from a developer called Prologue Games, Knee Deep is a detective drama which tells the tale of an apparent suicide of a local actor and is set in the Florida swamps.

Easily the first thing which grabbed my attention about this game was the overall unique presentation.  Rather than playing a traditional videogame role Knee Deep presents itself as a stage play and casts the player as the audience.  As the audience I had no direct control over the three lead roles in the play, although I was able to influence what they said and how they said it.  There is a brief introduction to explain how this works, which details that the play will be directed though choices I could influence at key points, and I’ll come back to this later.

The graphics are nothing to write home about in general but the little touches like the limelights and rigging really sell the idea of being in a theatre.  Knee Deep also does something interesting with the audio here as for the most part the game is pretty silent.  Rather than having music blazing out all the time it relies on a score which fades into the background, only truly coming to the fore at moments of dramatic tension.  This is a nice conceit and really manages to give the game a unique feel.  This score is complimented by audience reactions which once again just add that little flavour to the overall presentation. 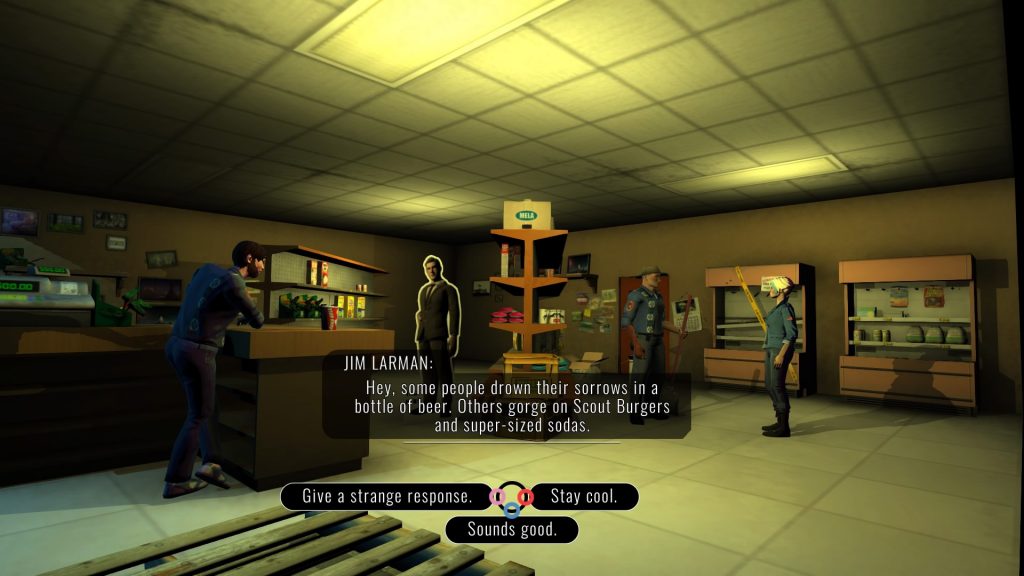 Having established this as a play the game takes place on one giant stage, with scenery set up in discreet locations to indicate different scenes.  The stage can also rotate through 180 degrees allowing for another set of locations.  The game focuses in on three leads and each of the three characters have distinct approaches to solving the crime, and their own baggage.  This makes each character different to direct and genuinely gives them their own personality.

The way the characters move around the stage informs the very feel of Knee Deep as the stage lights will sometimes either follow the characters, or let them walk in darkness towards the next location.  Once at the location the scenery will open like a clockwork box in order to allow the drama to move inside.  This whole treatment is successful and was unlike anything I’d seen in a game before, it genuinely made the experience feel like being at a stage show.

Whilst Knee Deep has been successful in presenting itself as a stage show it hasn’t been so successful on presenting itself as an interactive game.  Outside of some very basic minigames, interaction is limited to selecting responses during conversations and occasionally posting a report.  These choices aren’t as clear as four different responses spelled out on screen, instead they are presented as more vague options.  It is therefore never 100% clear exactly what the characters response will be.  Whilst this does play into the idea of the player being able to shape the play, I was left frustrated when the responses I chose didn’t mirror what I expected. 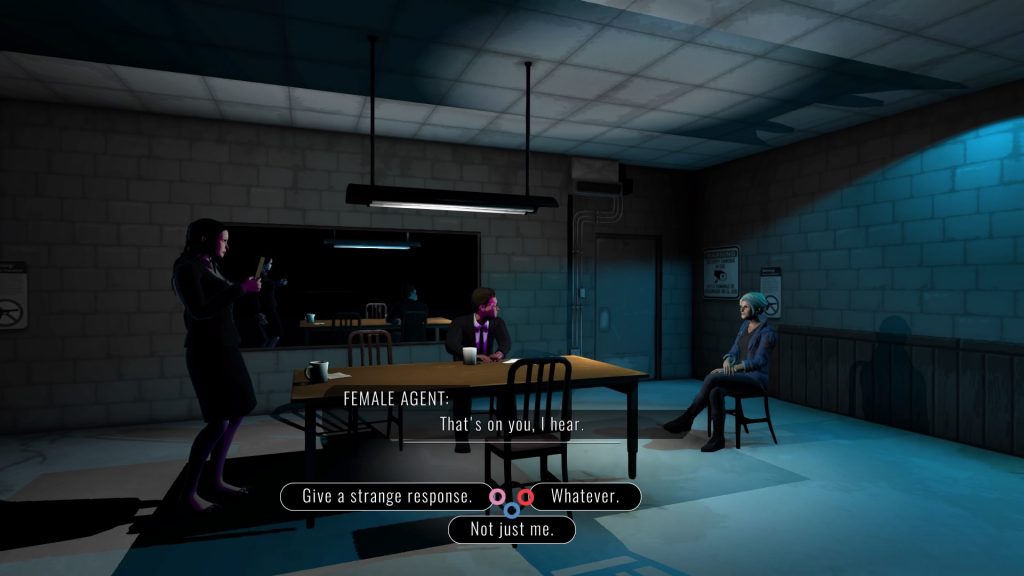 Another aspect which frustrated the gameplay was the character animation.  As a game modelled on the theatre Knee Deep lacks all of the dynamism to be found in a stage production.  The character animation feels unnatural and wooden and the characters often stand stock still when delivering lines of dialogue.  The poor animation actively worked against getting me engaged with the story which is a shame as the story being told is decent.  The only saving grace here was in the voice acting which is generally pretty decent.  In particular I thoroughly enjoyed the inclusion of a Chorus before certain scenes as this really made the game feel like a play.

Being set over three acts Knee Deep clocks in at around four hours, so it isn’t a long game by any stretch.  Unfortunately though there are some terrible pacing issues with the first act in particular feeling overly long and plodding.  Happily though the second and third act are much better paced and by the time I’d finished the game I was sufficiently invested in the story to want to know how it would all resolve. 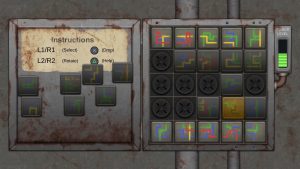 I initially started Knee Deep I was confused by the odd design choices and the lack of interaction.  However having persevered past the clunky first act and got my head round the fact this is a game aiming to mimic the theatre I really began to enjoy the tale being told.  Despite some clunky animation and pacing issues Knee Deep just about manages to bring the theatre to the PlayStation 4.

Knee Deep
6 Overall
Pros
+ The ways it brings the stage to the PlayStation 4 is great to see + I love the chorus before some of the scenes + Tells a decent murder mystery story
Cons
- Sometimes the dialogue choices didn’t provide responses as I’d expected - Lack of interaction will put some off - Pacing issues in the first act make this drag more than it should - Poor character animation gets in the way of the drama
Summary
Dont be confused by the odd design choices and the lack of interaction. Knee Deep is a narrative driven game aiming to mimic a play, and despite some clunky animation and pacing issues it just about manages to bring the theatre to the PlayStation 4.