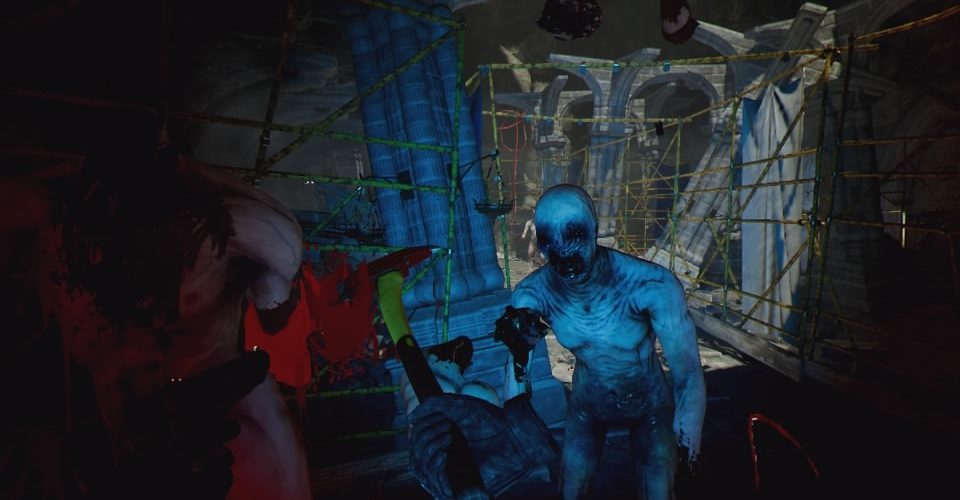 Killing Floor: Incursion is a PSVR title in Tripwire Interactive’s ‘travel to Europe and kill zombies’ series and is available now with 2016’s Killing Floor 2 as part of a bundle called Killing Floor: Double Feature.

We previously reviewed Killing Floor 2 here and we enjoyed the game, especially when it became a PS+ freebie some six months later which meant we could all get involved. As the least likely to like it, I personally even got a lot of fun out of it.

But we’re here to talk about Incursion which takes that well-worn plot device of ‘you’re in a simulation’ but fills it out with a bit of extra plot as it turns out the simulation has been hacked and now you are trapped in it and a lot of people will die if you don’t kill all the virtual zombies and harvest the virtual DNA. 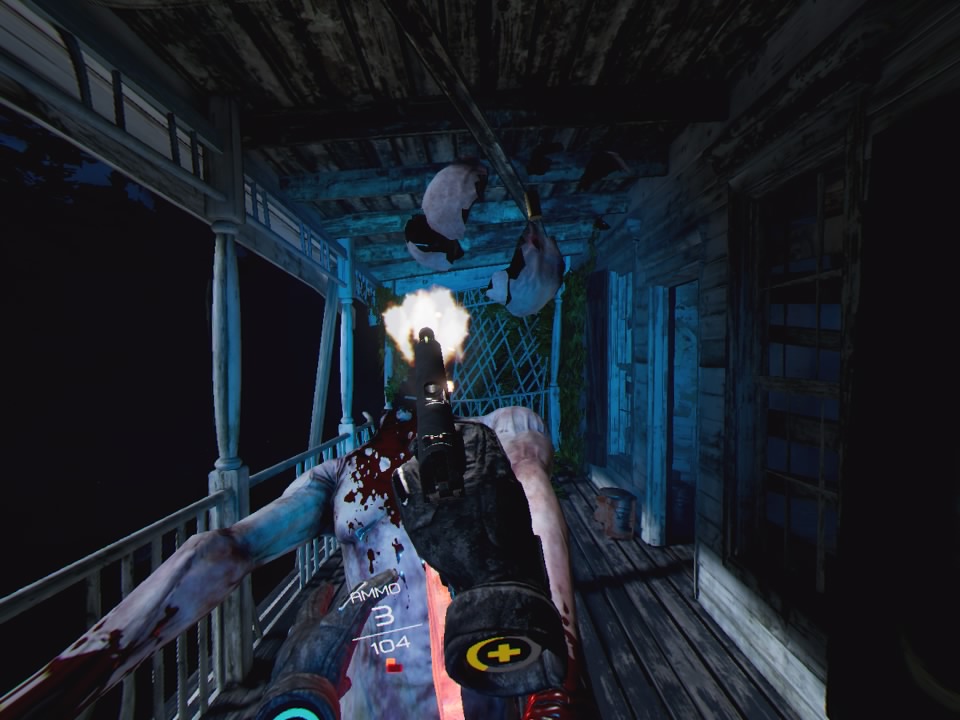 The story plays out over just a few hours (some have said three but we had issues that dragged it out a little) and has that mixture of stern and irreverent dialogue that echoes games such as Portal and Headmaster. There’s definitely a good sense of humour on show here and that’s a good thing because Killing Floor: Incursion is a quite a scary game at times.

The game requires two Move controllers, one for each hand, and has a reasonably clever system for managing your gear. You can equip two pistols which can be stored in side holsters as well as a melee weapon such as a knife or axe on one shoulder and a two-handed weapon on the other which are accessed by flailing your arm there and pressing the trigger. A handheld torch is attached to your chest armour also.

It took us a while to figure this all out because the tutorial which teaches you all of this glitched out on us and wouldn’t let us continue. So in the end we dived into the main campaign, got stuck (because we couldn’t figure out the torch thing) and sacked the game off for a day because it was doing our head in. Especially the side holster thing because looking directly down when you have a PSVR headset on and you’re sat on a sofa doesn’t really work all that well. We didn’t like it in Arizona Sunshine and we don’t much like it here. 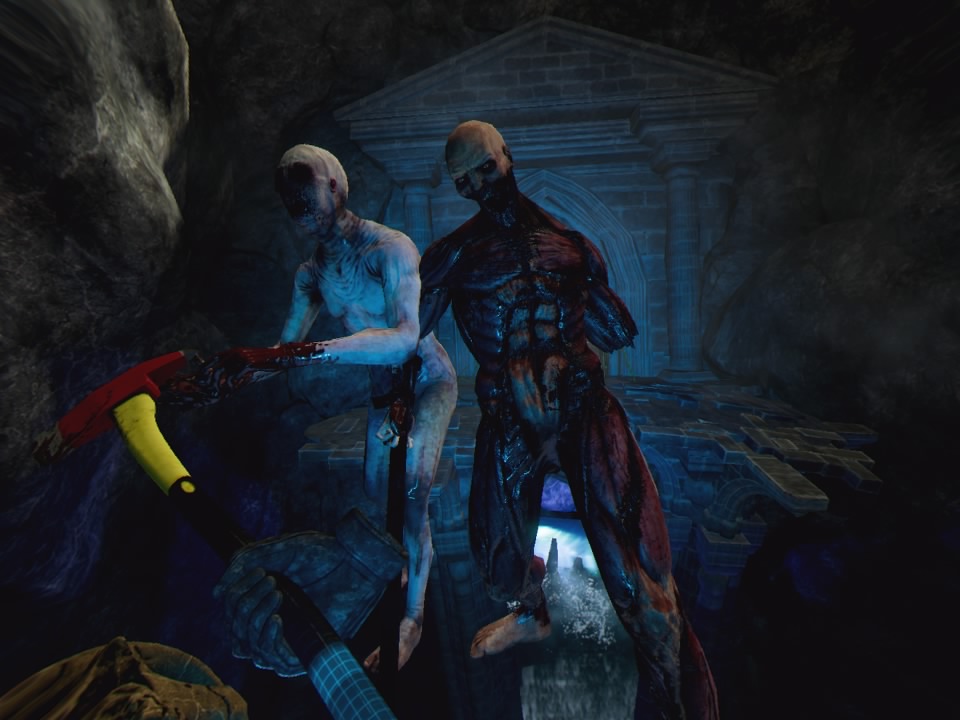 So, we slept on it and tried it the next day. Things got a lot better. For one, the impossibly dark farmhouse stage that opens up the game ended up being the only one that was set in pitch blackness. Later levels are a bit better lit which makes them easier to play and *whimper* a little less scary.

Once the game clicked it all fell into place. We got used to switching out a more practical torch and pistol set up for a more combat based one when the situation called for it and there’s something genuinely satisfying about fending off a zombie horde with an axe in one hand and a gun in the other.

Being set in a simulation, the zombies can just warp to where you are sometimes which isn’t great. You’re playing a soldier and the tendency is to find a corner and defend the exits but that doesn’t work so well if a zombie can just appear behind you and start wailing on your head. 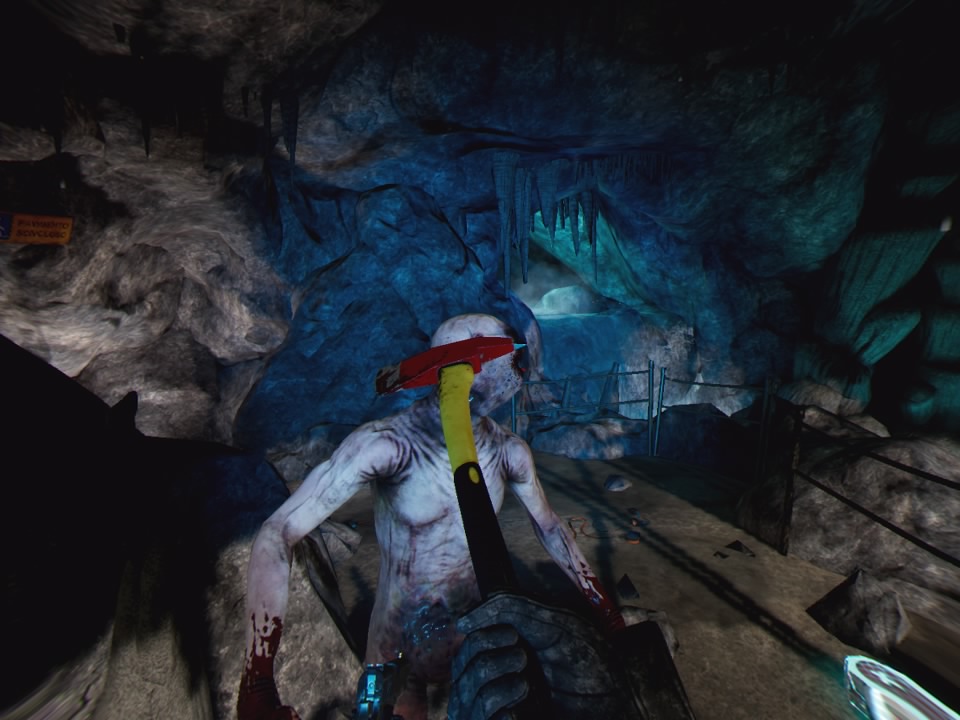 But those battles are pretty exciting it has to be said. There are no laser pointers on your guns and so we tended to favour letting the Zeds get close before shooting them in the face. Getting a clean headshot triggers a satisfying little slowdown, giving you a split second to compose yourself.

If the game was just a wave shooter, it’d be a pretty satisfying title and indeed the game does offer that with its Holdout mode but the story mode does also require a lot of moving around and puzzle solving which can get in the way of the fun a little bit.

Puzzles tend to involve pulling out your flashlight and using its secondary scanning mode to find objects which you then take to another place in order to open a door. In a non-VR game that kind of light puzzling would take a second to figure out and execute but VR games tend to have faffier controls and that can be the case here. 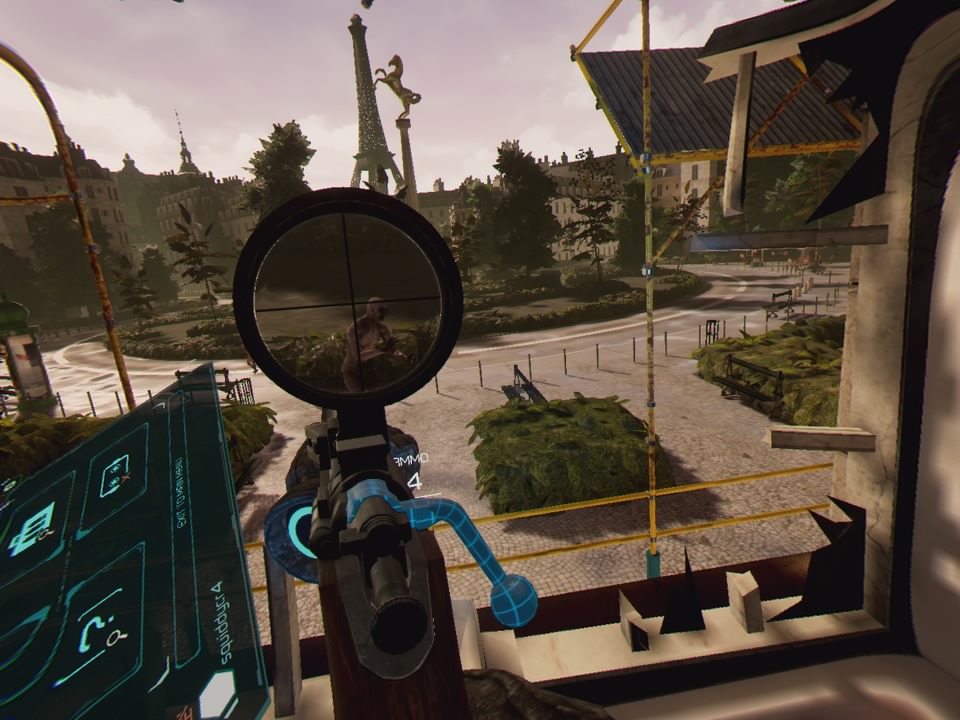 The game’s second level is a case in point. At one point you need to use the torch to find skulls, then you need to holster the torch to grab the skull in order to take it a square platform thing while being attacked by zombies. Mix in the need to use the torch to scan for “corrupted data” while using your gun to defend yourself and then having to drop something to be able to pick up spare ammo and it all gets to be a bit of a faff. Doom 3‘s duct tape mod exists for a reason.

This all came to a bit of a head when we got to the end of level 2 and started the descent down to that level’s boss when all of a sudden we got stuck in the scenery and had to restart from the mid-level checkpoint which is before all of that skull bullshit which meant we had to do that twice. UGH.

This is because the game uses a teleportation mechanic. You use your left Move controller’s Move button to activate your teleportation indicator and release it when you’ve pointed where you want to go. This is never a great option in games (we far prefer rolling the sickness dice by turning on smooth movement and navigating with an Aim or DualShock but that’s not an option here) and here it just leads to frustration as you continually get stuck in walls. Most of the time you can get out eventually but in this case we couldn’t. 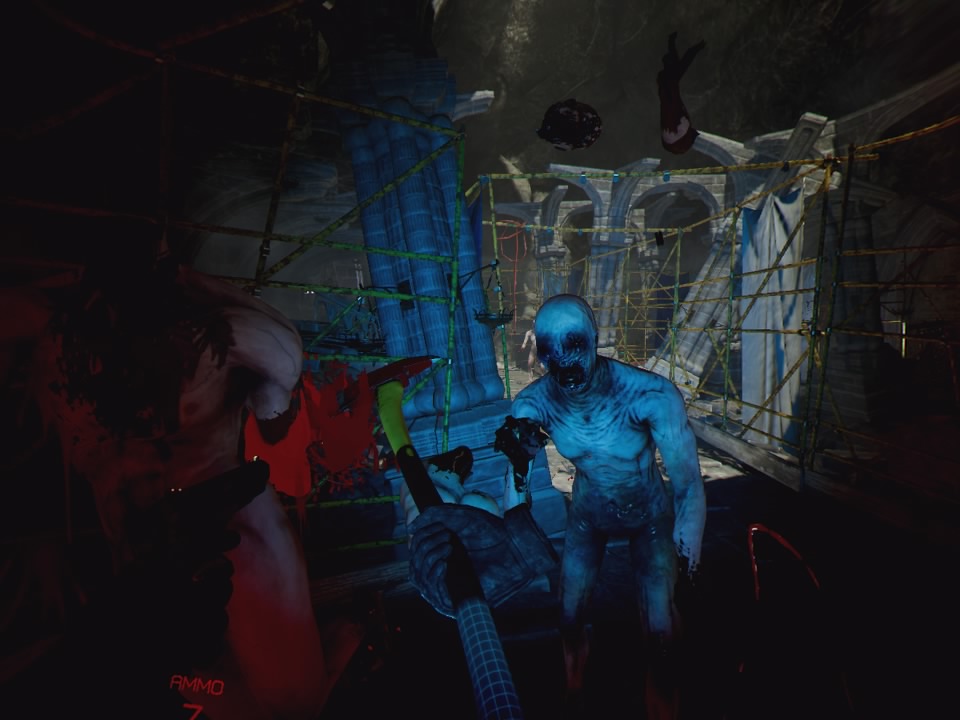 Also, while the game gives you options for sitting or standing, you can’t really configure things accurately and we couldn’t even do the lean forward, hold Options, move back trick which usually lets us set the camera a bit ahead so that we’ve got a better view. Between that and the faffy arm mounted touch-screen menu, the UI is pretty horrific.

However, when the game is flowing and the controls are at their least obstructive, Killing Floor: Incursion is a really good, scary shooter that does a decent job of making you feel equipped while also putting the odds in the zombies’ favour. Some of the enemy types are pretty disturbing as they lurch towards you in the dark and the story actually isn’t all that bad.

With just four levels, this isn’t the longest game and that’s fine because VR games shouldn’t be long.  The game does mix things up a bit though with some interesting set pieces including an interesting, if lengthy and frustrating, sniper battle in Paris.  It occasionally throws a new weapon at you as you progress and these are usually fun to play around with. 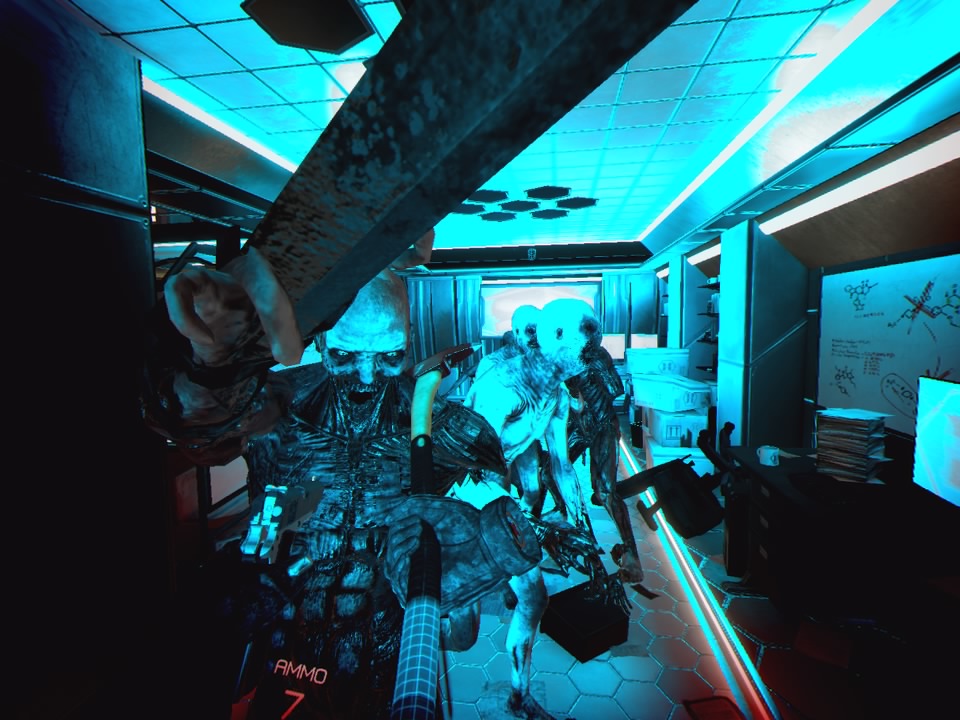 Visually the game uses VR reasonably well but the textures aren’t always the best, there is also a lot of clipping in evidence which makes the game feel less solid than it should (the ‘it’s all a simulation’ excuse doesn’t really cut it) and the game does lack a real sense of scale and awe some of the time but there are a few sections where this isn’t the case. Rush of Blood is still the bar for games of this type though which is odd given that that was a launch title.

The audio fares a bit better with some good voice acting and lots of desperately creepy noises to deal with.  However, there was one massive issue for us.  Occasionally you are given instructions by Emma who is the lady leading you through the simulation.  Unfortunately, her instructions were always one action too late.  Like she’d be offering you advice on the action you’d just done rather than the next one and sometimes the puzzles were vague enough that it wouldn’t be obvious what you had to do.  The final boss battle in particular has a very illogical puzzle element to it that is terribly handled and the guidance on offer was ridiculous.  Thankfully, the checkpointing on that battle was pretty generous.

Despite the frustrations, Killing Floor: Incursion grew on us.  By the time it was over we were glad to have played it but glad it was over too.  It might be a while before we go back and do it all again in hardcore mode and unlock the other ending but the game leaves us with some fond memories.  When it comes to scary shooters in VR, Rush of Blood is still the most immediately gratifying one and Arizona Sunshine offers the better story mode but this isn’t a bad option if you want to shoot some zombies in the face.

Killing Floor: Incursion
7 Overall
Pros
+ Satisfying shooting
+ Good choice of weapons
+ Amusing story
Cons
- Puzzles are weak
- Controls can be a struggle
- Teleportation movement is buggy
- Audio cues are mistimed
- Textures are a bit clippy
Summary
If you can get past the fiddly controls, the underwhelming first level and the occasional progress-stopping glitches, Killing Floor: Incursion is an occasionally funny, often scary and generally fun VR shooter.