Disney Dreamlight Valley is a chilled-out life-sim/adventure game from veteran French publishers Gameloft which looks to take the well-loved gameplay mechanics of Animal Crossing and Stardew Valley but with an abundance of Disney characters and lore.

The concept of the game is quite straightforward.  All your favourite Disney characters live in the titular valley but over the years the once green and pleasant land has been taken over by thorns that cause the characters there to forget things.  Indeed ‘the forgetting’ as it is called has turned the place into a bit of a nightmare, like one of those hoarding programmes on Channel 5 but more purple. 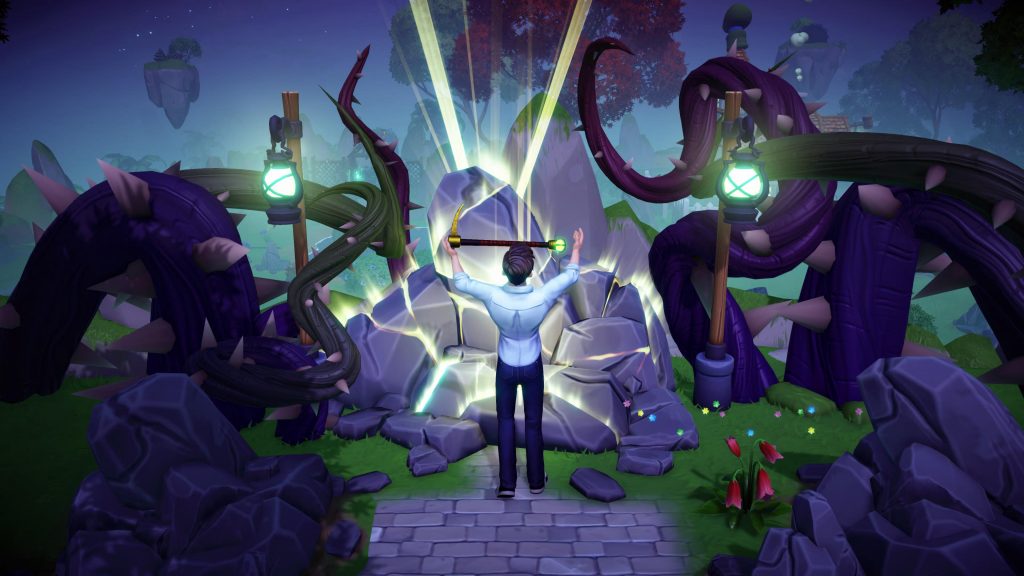 While dreaming you are brought to valley where Merlin does his best to explain to you what has happened.  He’s losing his memory too though but the idea is that the valley was once looked after by ‘The Ruler’ but when they left, everything started to crumble into ruin.  The houses, the castle, the gardens all lost to these thorns.  Now obviously that ruler was you but you grew up and forgot the magic but that’s okay because now you’re back and you’ve got enough magic of your own to start removing the thorns.

From this point on, the game focuses on two things:  repairing the world around you and making friends with the inhabitants.  From early on, you’ll see some of Disney’s biggest hitters.  Merlin, Mickey Mouse, Scrooge McDuck and Goofy all give you various tasks that bring back some of the facilities of the first area.  Goofy’s little garden shop, Scrooge’s furniture store and Mickey’s community garden all give you the opportunity to buy and sell various things.

You’ll unlock tools early on such as a pickaxe for breaking up ugly rocks, a spade for gardening, a watering can for feeding your plants and a fishing rod.  These are all easy to use and never run out or break, so it’s very easy to just potter about if you fancy doing some landscaping.  The only thing that’ll let you down is your own stamina.  Run out of that and you’ll need to eat something (which is fine because you can harvest fruit from bushes all over the place) or go back to your house. 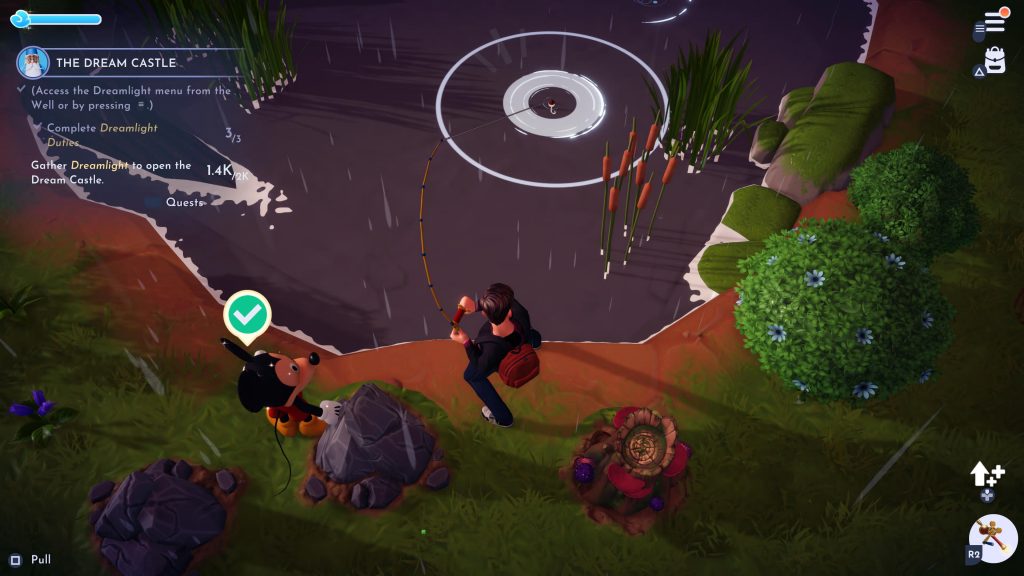 Everything in Dreamlight Valley has a purpose.  Food can be grown and then eaten or sold.  Or you can cook it into meals and then eat or sell those.  Or you can gift meals to the other characters which will boost your friendship levels with them.  Going up the levels also gives your max stamina a boost, so it’s all worth doing.

In terms of your own areas of focus, the game has a few areas.  You can focus on making your home look nice (and kitting it out with decent equipment), you can garden or fish to raise money, you can go around clearing the area of thorns or you can complete the various quests the characters set for you.  This is very much a game that you can play at your own pace. 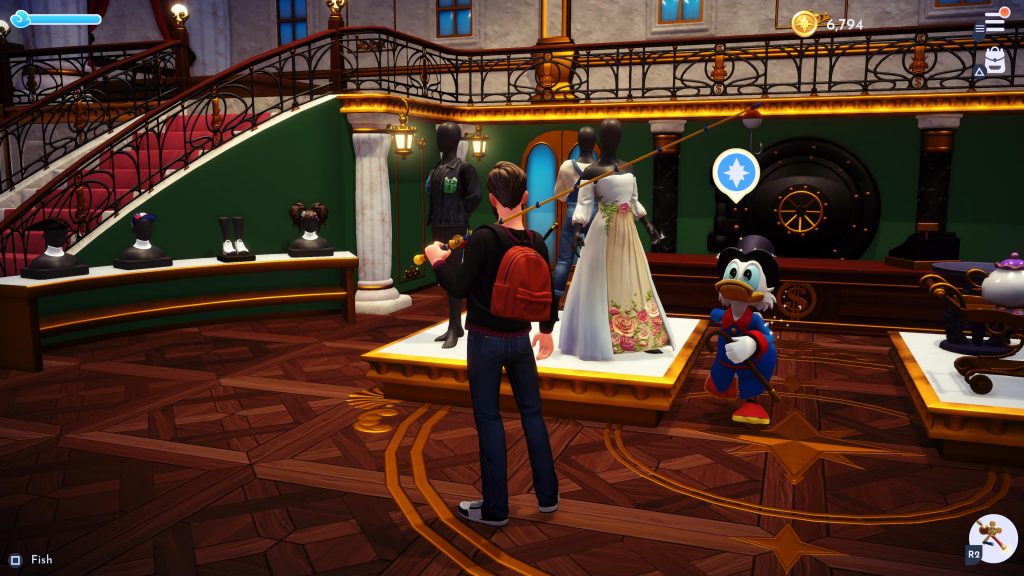 Whatever you do, any completed tasks such as fishing, selling, buying, clearing up will all add up and can be checked in to earn ‘Dreamlight’ which is then used to unlock new areas such as the big Disney castle that has fallen into disrepair.  There are just a handful of these areas that cover beaches, meadows, the obligatory frozen area and so on but each has big names to meet and befriend and, to be fair, it’s all really quite charming.

If you’ve played the likes of Animal Crossing then you know what to expect.  It’s basically a survival game with no stakes but that’s fine, sometimes its just nice to potter around with a game and relax.  Older gamers might want a bit more to do in terms of maybe having some deeper building management (the game could use some Kingdoms of Keflings style resource management) but younger gamers will quite happily run around in the world Dreamlight Valley provides.  Their only issue might be that sometimes your quest objectives aren’t very clear.  We struggled to figure out what Mickey Mouse wanted from us early on.  There’s also a whole restaurant quest line from the rat in Ratatouille that had us a bit stumped until we figured out the quirks of what it wanted from us.   Generally though the game is reasonably intuitive, even if it does give you a lot of information up front. 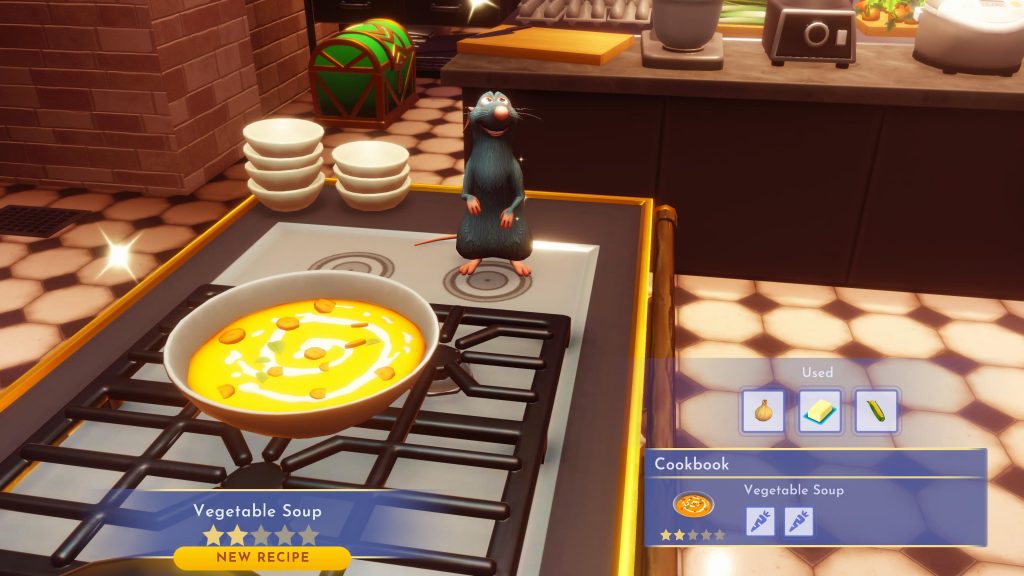 In terms of presentation, the bold and colourful visuals do a pretty good job of giving you that Disney atmosphere.  We’d maybe have preferred something cel-shaded, just to give that cartoon look but generally everything looks okay.  The chunky style reminded us a bit of the latter Saints Row games or Dauntless and while it won’t wow players, it’s all okay if a little uninspiring.  Similarly, the game uses familiar melodies to hark back to tunes you’ll remember from the films but characters aren’t voiced (beyond their cheery greetings), so you do feel a little detached from them.

There’s a ton of stuff to do in Disney Dreamlight Valley and it’s not really a game you want to plough through quickly (like if you’re reviewing it for example) but rather one where you can dip in and out off or just play when you want to relax and let the Disney charm flow over you when you’re having a tough day.  The only worrying aspect is that the game will be switching over to free-to-play in 2023 and we’re not really sure what that’ll entail.  After all, Disney’s familiar charm is tied to one of the biggest corporations in the world.  But for now, at under £30 for the basic version, there’s plenty to like about Dreamlight Valley and hopefully it’ll stay that way.

Disney Dreamlight Valley
8 Overall
Pros
+ Full of Disney charm
+ Relaxing but there's always tons to do
+ Lots of opportunity to make the world your own
Cons
- We're worried about the free-to-play aspects next year
- Quest goals aren't always super clear
- Presentation won't wow anyone
Summary
It's easy to be cynical about Disney but they've got a hundred years worth of characters to draw from and they use them to great effect here which gives this charming life simulator a special feel. We're not sure how the future planned free-to-play economy will work but, at the moment, the game offers players a fun, relaxing time.