I don’t know many people who don’t enjoy the John Wick series of films. If you like action then that’s basically all you get with just enough plot to have a reason to keep more movies coming. John Wick Hex is a rare thing these days in that it’s a licenced game. Once the bane of gamers the world over you couldn’t move for licenced tat clogging up the shelves in game stores (remember those?) but now they’re far less common simply down to budgets. Released about six months ago on PC John Wick Hex used the small budget as an excuse to experiment, this isn’t an action game in the vein of Max Payne as you might expect. This is a time based tactical game. 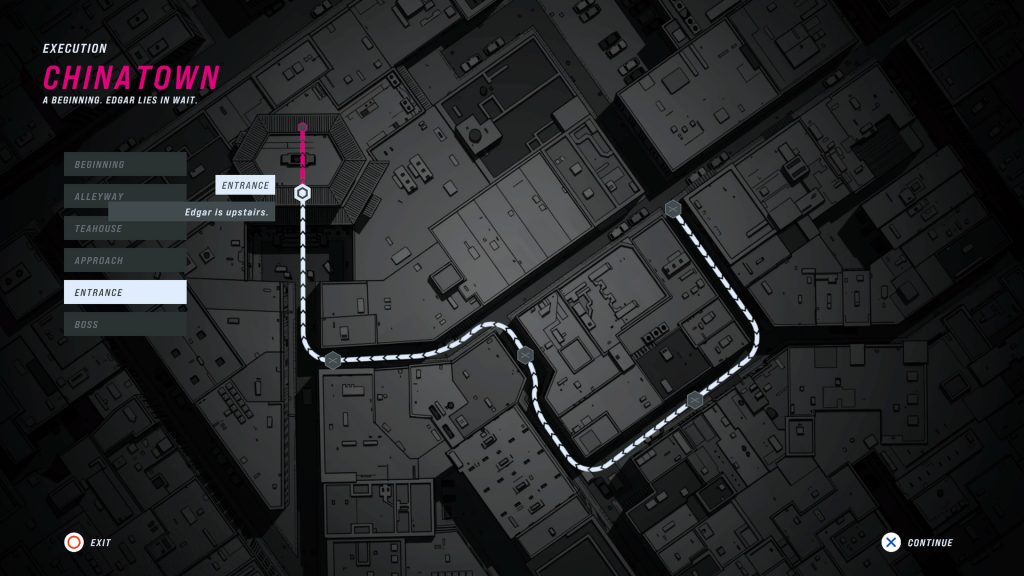 Set before the first movie the titular villain Hex has abducted Winston and Charon from the New York Continental (voiced by the actual actors) and the High Table has put a contract out on him. You play as John Wick (silent) in his prime, making his way through Hex’s henchmen on the way to his secret location. There are cutscenes before each area but they are merely stills like a comic book, with no animation but made up of stylised 3D models.

Once into the game proper you’re greeted by a paused, top down view of the action. You move a cursor around to select where you want John Wick to move and you’ll notice a timeline at the top of the screen. Rather than having action points here every action you make takes time and you need to manage your position and timings to get through each stage. You start the chapter with your custom handgun and one spare clip to reload with. Much like the movies John Wick double taps his shots so each shot will generally take two bullets so you’ll quickly chew through your ammo. Luckily you’ve a few more options up your sleeve.

There are a range of enemies to face, some will have guns whilst others will be purely melee. If a gun-toting enemy spots you they’ll take aim but this too will take time depending on the weapon. The timeline is reasonably detailed so you can see who’ll act first, if you can take your shot first then if you land a the hit (a percentage chance based on multiple factors) then it’ll cancel the enemy’s action. If the enemy is going to get their shot off first then breaking line of sight by moving behind a pillar or ducking behind cover will cancel their action, but the same rules apply to you. Melee enemies can’t attack from distance so it is up to your whether you want to use up some bullets to take them down or get in close and use a range of melee abilities. 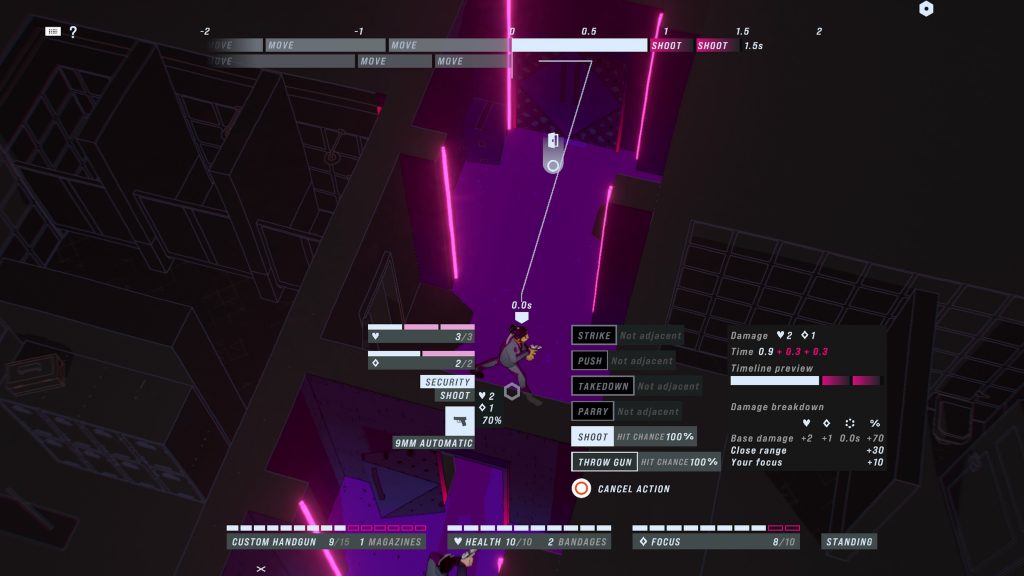 You have focus points which boost your abilities or can be used to do special abilities like a takedown which is more powerful than a simple punch and can change your position or if you’re in close and are about to get hit then a dodge will save your bacon. You can refocus when your run low on points but this, as with everything, takes time. Eventually you will run out of bullets and after your initial reload your custom handgun will be useless, except for as a projectile weapon itself which you can throw at enemies. Instead you’ll need to pick up a downed enemy’s weapon which can range from handguns to revolvers to shotguns and assault rifles.

The balance of time, focus and ammo management and positioning gives the game a similar feeling to the films. You can certainly see what the developers were going for, trying to replicate John Wick’s conservative approach to combat whilst still dispatching hundreds of enemies. It is mostly successful and popping a guy with your final bullets, throwing another that got too close to the ground, tossing your empty pistol, stunning another enemy before picking up another pistol and finishing off the dazed enemy without a scratch on you is very satisfying.

There are seven chapters altogether, each broken into six or seven quite small areas. All you have to do is get to the end, with the final level generally featuring a boss, but if there are enemies present you can’t leave the level until they are dealt with. Each level is persistent in a chapter so whatever health or ammo you have when you finish one section is what you’ll start the next one with. There is a planning stage at the very beginning which lets you apply perks or stash guns or bandages in upcoming levels but it’s quite stingy so not the game changer you hope it to be. 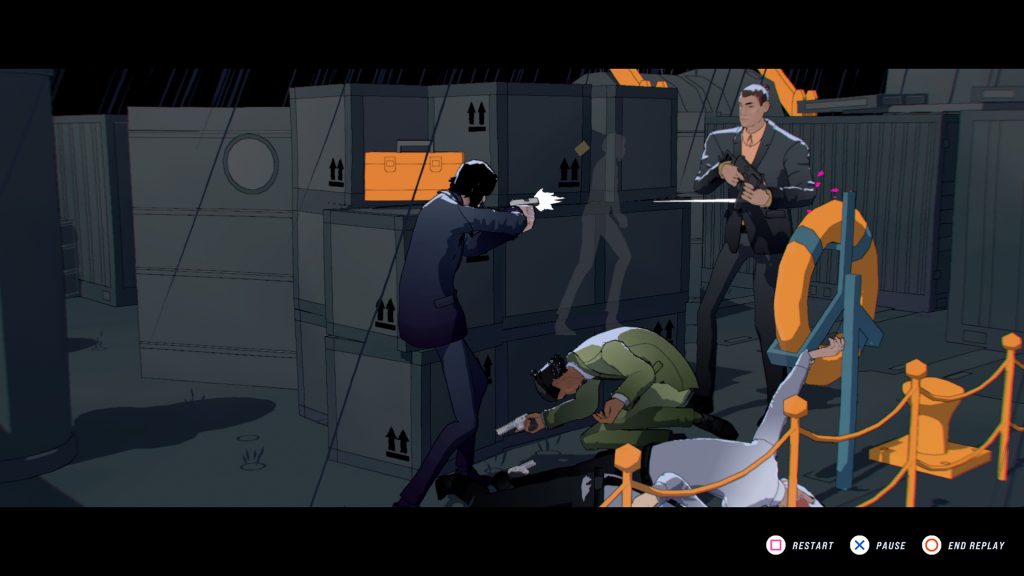 Once you do finish a level you can watch a replay of the action with camera shots closer to the action and no pauses. It’s here where a little more budget would have been appreciated. The graphics are stylised, which is fine, but the stilted movement and basic animations, which are bearable when playing, don’t look great when played back. Here I’d have loved for the movement to be smoothed out and some canned, context sensitive animations to play out, even if they didn’t in the level itself so that it would look like a scene from one of the films. Instead you get John Wick zigzagging through the level, doing the same attack animations with camera angles that seem to only get it right through luck. It didn’t stop me watching them each time (it crashing and making me play the level again did though) it just could be a lot better, instead of almost comical.

You’re rated at the end of each level based on time taken, whether you healed or not, variety of guns used and accuracy and if you nail each then you get the title of Baba Yaga. It’s pretty tricky to do so there’s some replayability there. You can also play in a mode where your turns have a seven second time limit forcing you to rush somewhat. More of a challenge for those who like to consider their actions but fast movements can lead to misclicking near an enemy rather than on him meaning you walk towards them instead of shooting them dead.

Depending on how much you struggle (the penultimate level felt like a massive difficulty spike to me) the game isn’t super long but you are incentivised to replay the levels and it’s far from a full priced title. I enjoyed my time with it and have gone back to try the speed mode and hopefully get those Baba Yaga ranks. I will say that once you get the hang of things you do end up approaching things the same way, but as I wasn’t getting the highest ranks maybe I still have more to learn. 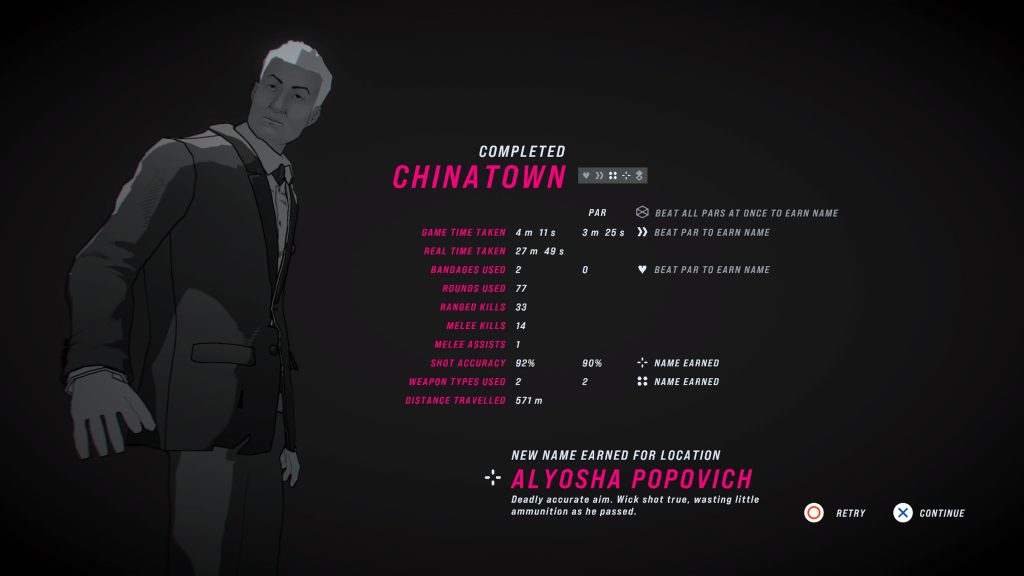 Those hoping for an action game will no doubt be disappointed with John Wick Hex but I have to say the approach taken here is successful. With a bigger budget we could have had replays of people’s ‘scenes’ flooding the internet and rivalling the movies but as it is it does a good job of making you feel like a badass (when you succeed) but the spectacle isn’t there. Tactics fans will enjoy it, fans of action may not appreciate what it’s trying to do.

John Wick Hex
7 Overall
Pros
+ Puts you in the mind of John Wick
+ Ratings encourage replayability
+ Feels fantastic when you come through an encounter unscathed
Cons
- Presentation is very low budget
- Gameplay doesn't evolve too much
- Replays could have been so good!
Summary
John Wick Hex is an unexpected take on an action franchise but it mostly works. With a bigger budget you can imagine the possiblities, but what we have got really does put you in the headspace of Baba Yaga.