I’ve come around to the idea of rogue-likes, though I prefer a rogue-lite if I’m honest, I like to see some sort of progression. It’s taken some classics to convince me that losing your progress every time you fail isn’t always a bad thing but that means newcomers have a tough act to follow. Enter Fury Unleashed, a run and gun rogue-lite. 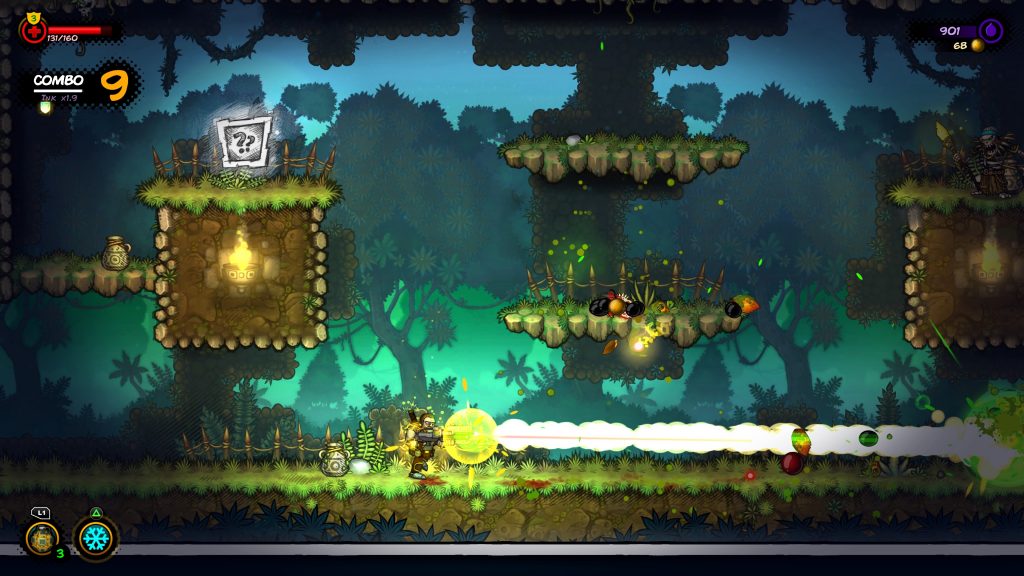 You play as Fury but the story is more about Fury’s creator. See Fury is a comic book character and he’s fallen on tough times. Once super popular he’s now past his prime and people have grown up and moved on. You don’t see any of this in the gameplay but as you complete levels little story beats pop up in the form of emails between the comic book artist and his publisher and forum posts. These only appear the first time you reach a certain milestone, otherwise it’s action all the way.

Being a rogue-lite the levels, referred to as chapters, are randomly generated. Each chapter is made up of multiple comic book panels which are separate screens containing enemies, hazards and, if you’re lucky, events which can grant you items or give you the chance to purchase or earn items or upgrades with a test of skill. It’s these random events that will grant you better weapons, armour or even just give you a stat boost. If you want to progress then you’ll need all of these. Or a friend in local co-op.

Fury is quite well equipped by default. You can aim with the right stick to fire whatever gun you have equipped, throw a grenade with

to swipe with your melee weapon. He can double jump by default and dash both in mid air and across the ground. Finally if he’s in the air he can slam down, if you land on the head of an enemy it’ll generally kill it instantly with only stronger types being immune. 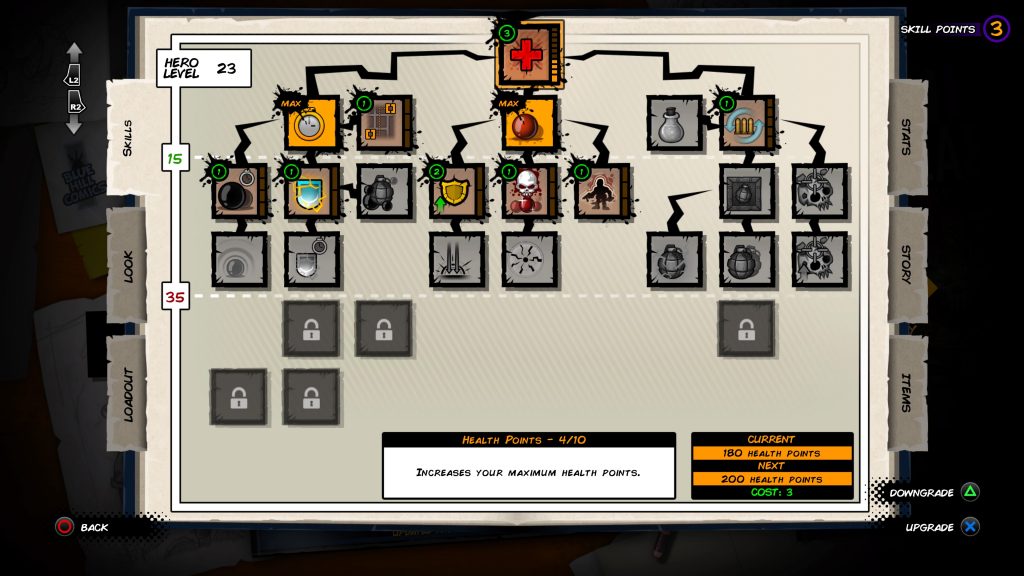 Using these skills to quickly move around the levels and dispatch the enemies is actually a key component as you have a combo metre that drains rather quickly and disappears if you take a hit. Getting your combo high and keeping it there is vital as you gain more ‘ink’ this way and can even gain shields that will protect you from damage or increase your reload speed.

Ink comes in a few forms, with red being quite rare and replenishing your health, gold is your currency to use at events and black is used to upgrade Fury outside of the game, once you’ve died (or completed it, I guess). Needless to say more of all of these are going to be useful, with a skill tree you can travel down improving Fury’s abilities, though there are no game changers I’d say. No doubt a combination of me getting better at the game and the upgrades, which come at a steady and fair pace, had me progressing further and improving my combos each time.

The game is split into three comic books plus a final level. Each comic has its own environment, enemies, sub bosses across three chapters and one final boss fight from a choice of three. If you beat all three of a comic’s final bosses on separate runs then you unlock the ability to start a run from the following comic, which is a nice feature but you forgo the chance to upgrade on the earlier chapter. 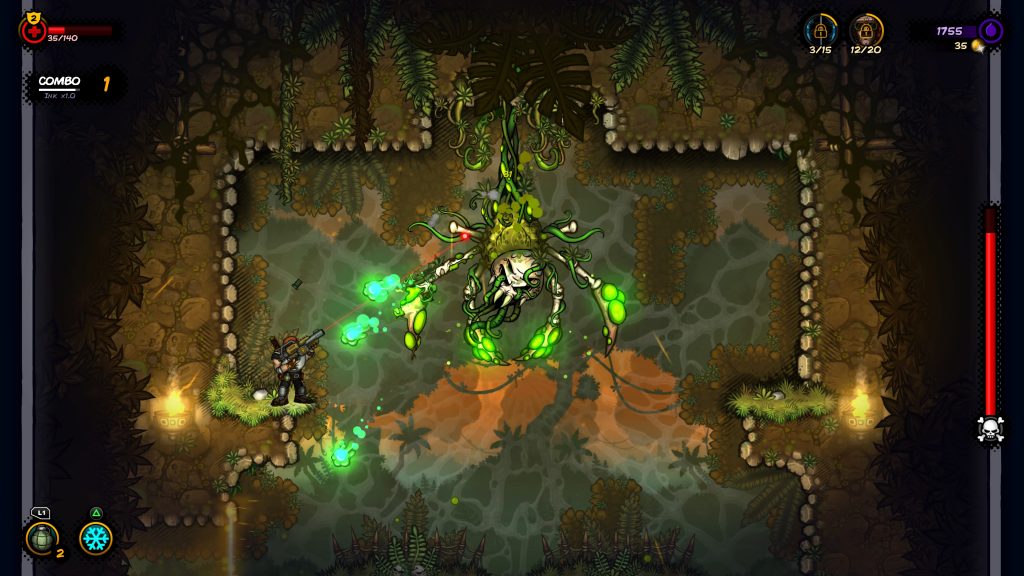 As with all good shooters the bosses have very recognisable patterns and it’s just a matter of recognising those patterns and executing. Similarly you’ll learn to quickly identify the enemies within a level and determine who is the biggest threat, can they attack from distance or are they coming for you, whether they explode upon death whilst also taking note of the hazards around the levels and leaping around destroying everything in your path without taking a hit. As those trophies pop for hitting certain combo milestones they’ll take you by surprise as you’ll be so zoned in on the action that you’ll not actually realise how well you’re doing.

Chapters are both horizontal and vertical and to aid getting around quickly if you run into a dead end you can teleport a limited number of times to panels you’ve already visited so managing a combo is always possible. Everything seems to be built to aid the combo mechanic with a lot of the upgrades being based around it and it feels awesome to pull it off. There’s a trophy for completing the game in one long combo which right now seems unlikely for me but I bet it’s a sight to behold.

I quite like the visual style as everything does look like it’s from a comic book and when the odd sketch enemy pops in they’ve got a good style too. Fury himself animates in quite a cut out way which I’m not a fan of but since you can customise him slightly and each weapon and piece of armour changes his appearance I can understand why they took this approach. I will say there are often times where things will get rather hectic and I’ll take a hit and not be sure from where, which is a shame but as I’ve improved at the game these have become less common though not eradicated completely. 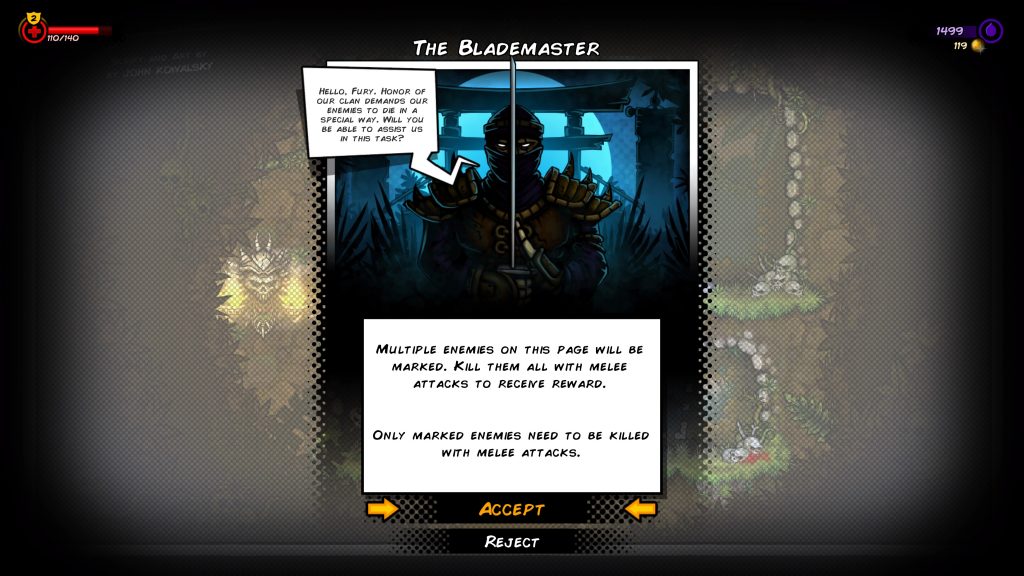 Sound-wise things seem a little sparse until you realise the music is tied to your combo so the better you do the more the music ramps up. It means the early going tends to be quite quiet but as you get better and and raise your combo the tension goes up with it as the music pushes you along.

I’m going to add Fury Unleashed to the list of rogue-likes/lites that I’ve had a good time with. It’s quite tough early on but the skill ceiling is high. I’ve finished the game on Hard (the default setting with Easy giving you lots of options for an easier time) and yet could have done better and I haven’t unlocked all the perks yet. This unlocks another difficulty with another beyond that.

Interestingly this changes the rules where you can no longer upgrade Fury outside of levels but instead upgrade from a base level between chapters choosing from random perks. Who knows what the final difficulty level offers but I hope to one day find out (by myself rather than through the internet). It provides a longevity which rogue-likes can struggle with once you’ve beaten them. I will say though that as you get towards the end of the game it becomes less stable. There was a common area with sound glitches and graphical glitches which I can live with but it did freeze losing all the progress from that run at the end of the game once. Only once, but not cool. 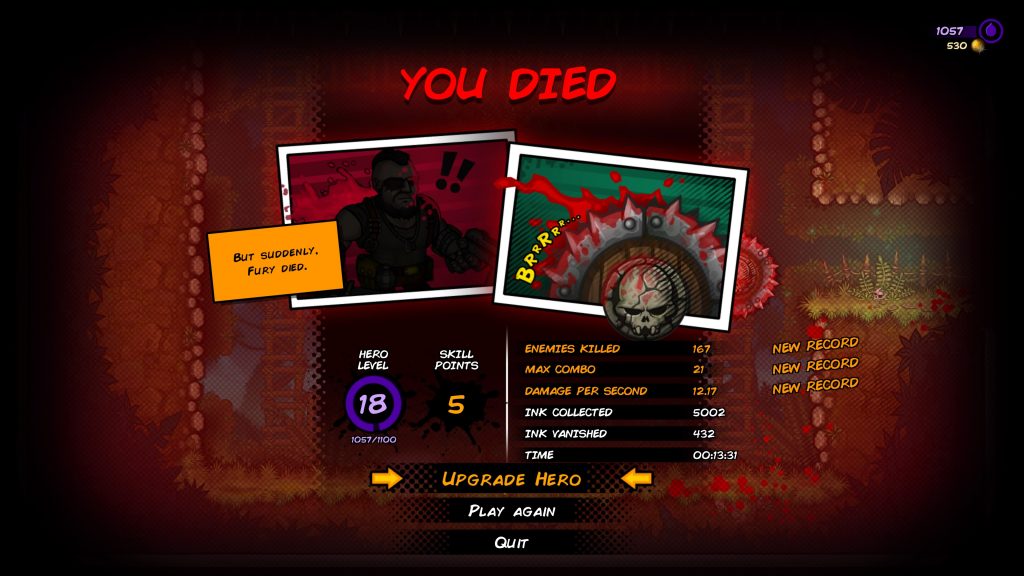 Fury Unleashed was a surprise to me. It was enjoyable from the off but once the combo play clicked suddenly the whole game opened up to me and I would very much like to see an expert play it, seeing what choices they make to keep a combo going. As with all rogue-lites the random element can help or hinder you but the overriding factor required is skill and because of that the gameplay shines through.

Fury Unleashed
9 Overall
Pros
+ Controls very well
+ Upgrades flow at a good rate
+ Lots of replayability
+ High skill ceiling
Cons
- Some hits seem to come from nowhere at times
- Sound is quite sparse until you get good
- It does become a bit unstable towards the end of the game
Summary
Fury Unleashed is a superb rogue-lite where your skills grow alongside your character's. Stringing together a long combo is rewarding in itself but also rewarded by making Fury more powerful, in theory helping you continue the combo. High level play will be something to behold.