Jagged Alliance has a long history. The first two games are seen as tactical classics but since then there have been multiple attempts to revive the franchise that have fallen flat. Now it’s the turn of Jagged Alliance: Rage! to try and bring the series back and maybe pave the way for a true Jagged Alliance 3. By the developer’s own admission it is a small spin off and has a lower than full price tag but does it have enough tactical chops to bring the franchise back to its glory days? 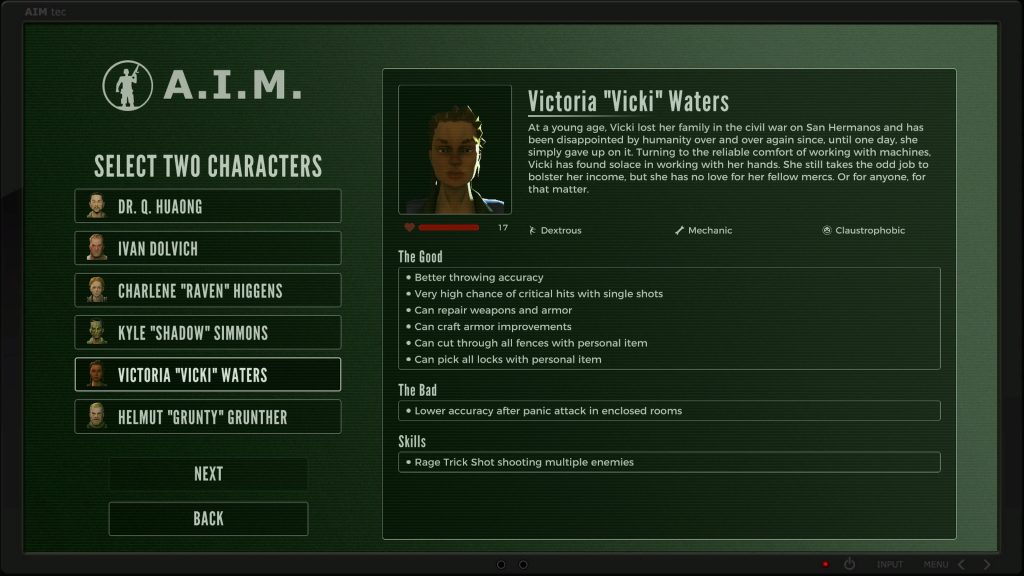 In an attempt to rescue a fellow mercenary from a helicopter crash on an island a couple of mercs from AIM land on the island but are quickly apprehended. Just before being experimented on they are freed when one of the doctors has a change of heart and they must escape the island, helping the locals defeat this mad dictator along the way.

Set twenty years after the first game, those who played the early titles will recognise some of the mercenaries you can take control of. Interestingly they have all aged and are all the worse for it. Each character has their own specialities but also weaknesses. You pick two to start the game and choosing a pair who will compliment each other is very important. I went with Shadow and Raven. Shadow seemed more suited to stealth gameplay, with the ability to use throwing knives to stealth kill from afar and his stealth take downs being silent. Unfortunately he’s also got a weak immune system giving him a higher chance of catching infections. Raven on the other hand is excellent with sniper rifles and in the dark and can disarm enemies. She is quickly demoralised by seeing innocents die however and is physically weak, making her unable to use heavier weapons.

There are six characters to choose from initially, each with their own abilities and personalities. Seeing your two chosen characters interact with each other is fun with their personalities shining through, though the acting is suspect across the board. In fact the presentation is lacking in all aspects, with weak animations and low quality character models. The game can be quite colourful from a distance, but the graphics betray the game’s low budget roots. Dropped frames happen often, affecting the controls and the UI in general can be a little laggy. 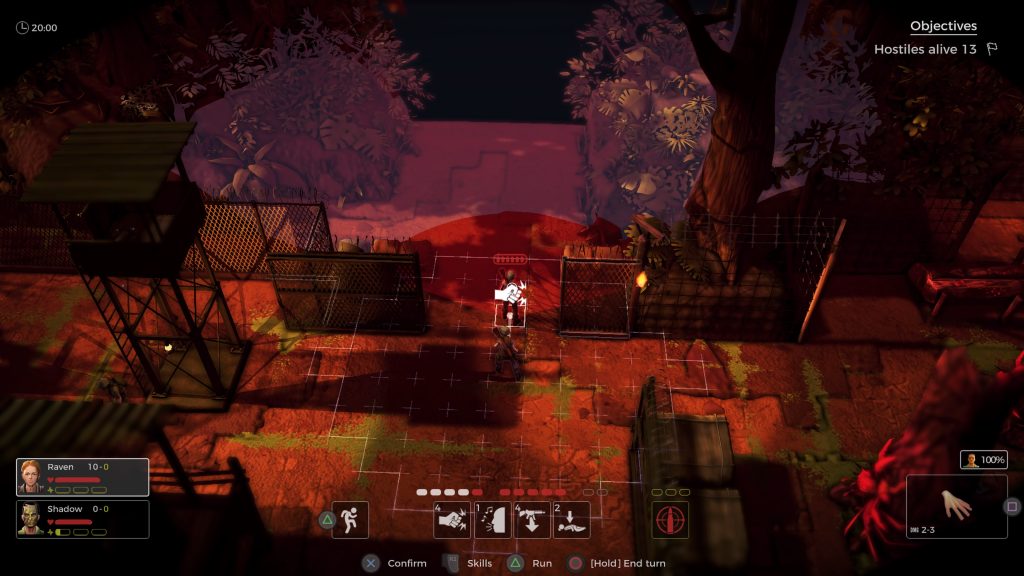 Luckily this isn’t an action game, so as long as you’re not too quick to confirm actions a little slip here and there isn’t a problem. This is a tactics game, the best example of which recently on consoles is XCOM (and its sequel) but there’s also been Phantom Doctrine. Similarly to those games you move your characters on a grid using the analogue stick to control what is effectively a mouse cursor. Here you have Action Points (AP), so you’re not locked in to two actions but can move or act as often as you like as long as you have the AP to do so. Stealth plays an important role so you’re given a lot of options for cover and movement.

Running will let you cover the most distance with AP but is noisy, sneaking is slower but silent, whilst crawling along the ground reduces the range at which enemies can see you. Beyond that walls block the enemy’s view and tall grass makes for a great hiding spot, obscuring the enemy’s view unless they’re close and actively looking for you. Depending on your characters or equipment taking out enemies silently is another matter. You can whistle to attract their attention although they become far more alert when you do this and even if you do get behind someone the kill may not be silent or may even fail resulting in only a punch.

If an alarm is raised then a gunfight will probably ensue. Cleverly if one character is discovered the other is not magically found as well, they remain hidden to continue sneaking around and picking off enemies that are preoccupied with your other character. Similarly unless an enemy raises an alarm they can be taken out without anyone else realising unless they find the body. Aiming a gun follows the same percentage based probably of hitting as XCOM, though you can spend AP to increase the chances of a hit and can aim at different parts of the body for different effects.

Weapons degrade with use and can be modified with scopes, extended magazines and the like. In fact there’s a surprising amount of survival elements that I’m not a particularly large fan of and feel they’re a little tacked on as the developers didn’t feel like the tactical side of the game was enough. Outside of missions you’ll be on a map screen and can move from point to point, deciding between areas to attack if multiple are available. Here you can worry about infections, dehydration, shrapnel as well as gun and armour maintenance. You have a limited inventory so having to carry around water (preferably fresh as dirty water promotes infections), medicine, bandages, med kits, weapon and armour repair kits can be a pain. Your mercs are constantly getting thirsty which just feels like busy work to me. 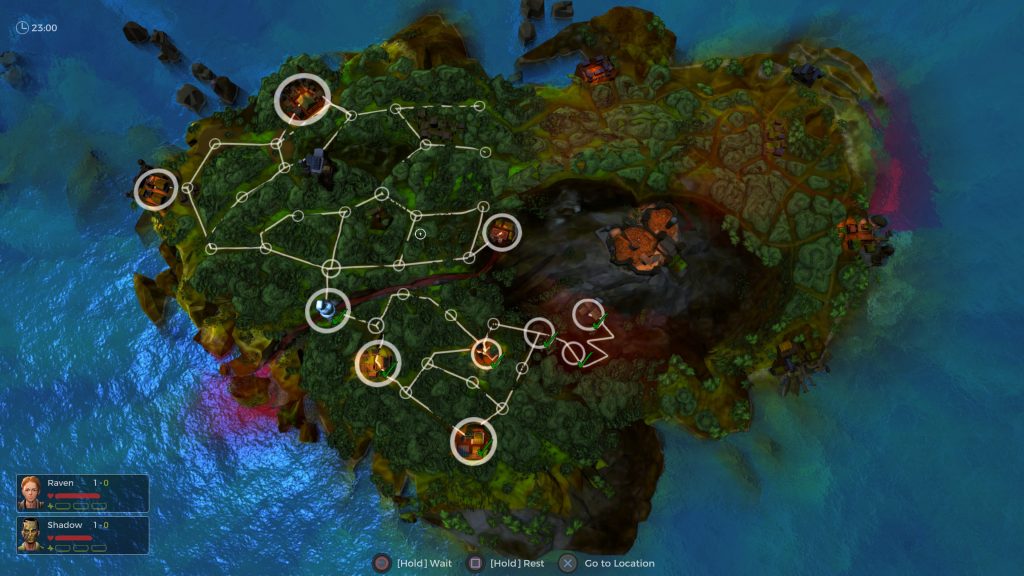 I did like acquiring equipment from missions however. Starting with next to nothing and then infiltrating an enemy post and coming away with better armour, weapons and items to improve your inventory size is rewarding and they continue to improve throughout the game as you fight stronger enemies. You can loot fallen foes and boxes but if you wait until you’ve defeated all enemies then you can ‘Remote Loot’ which lets you loot without having to be near to the item in question. This is good as you have to continue moving using AP despite there being no threat which is an odd decision but it still takes a long time to check everything and loot what you need to and it becomes a little tedious, especially as everyone has their own individual inventory.

Tedious would have been a key word in this review after my first few sessions playing Jagged Alliance Rage! Wanting to play stealthily as that’s my preferred style and finding combat to be a drain on resources, ammo, weapon degradation and health, that’s how I approached every mission and it was painful. Enemy AI was erratic to the point of broken, walking in literal circles making it difficult to get an opening. The rules seemed illogical. You can hide in tall grass, but an alerted enemy (remember that whistling to draw attention will alert an enemy) can see a dead body in tall grass from across the map. I’ve had enemies spot bodies that were both above their possible eyeline and behind sandbags. The vision cone doesn’t deform based on where the enemy can and can’t see so you just have to guess what blocks their vision and what they can magically see behind. It’s a massive pain which requires constant use of the save/load feature.

However, I’ve banged my head against it enough times now that I think I get the rules. I also found a crossbow which made Raven far more useful, allowing for silent kills from a distance whilst Shadow snuck up behind people for the close range kills. I had to reload saves far less as my approach tended to work more often than not and on the whole things just went more smoothly. As you progress the resistance takes over the map more and you gain abilities that make that less of a chore as well. Unfortunately I’ve had the game fail to load save games, stuck loading forever whilst my PS4 fan winds up and I’ve had it crash too. With the frame drops and unresponsive menus it feels like it could break at any moment which isn’t great. 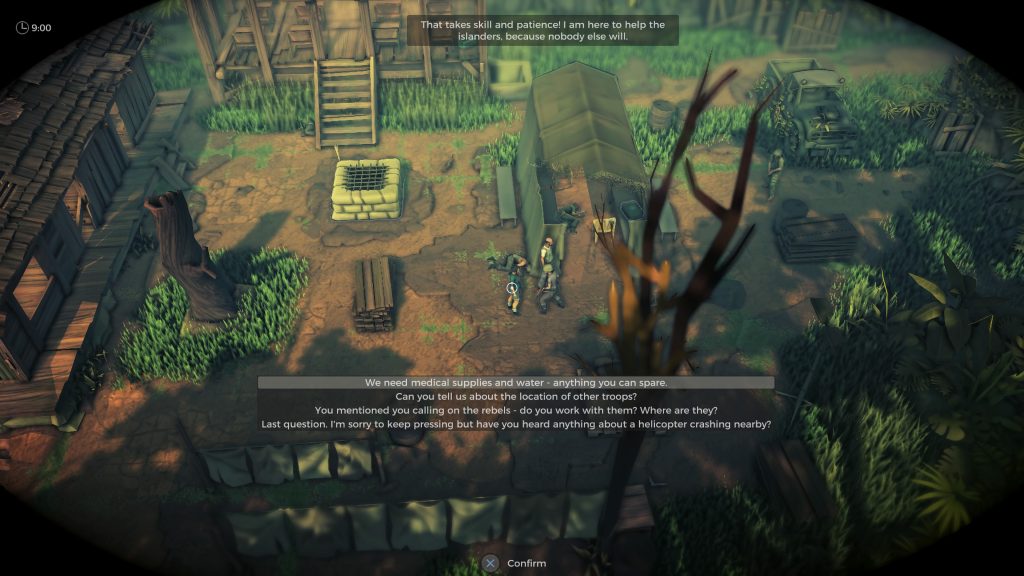 A snappier control scheme and a little more development of the gameplay mechanics and Jagged Alliance: Rage! could be talked about in the same breath as XCOM 2 and Phantom Doctrine as a cheaper alternative. However as things are it asks a lot of the player to learn to live by its rules whilst suffering through technical problems. I’ll continue to play it, to see how the other starting mercenaries change my approach and there are multiple difficulties and you can even play through the whole thing in online co-op if you fancy, but as a fan of tactical gameplay Jagged Alliance: Rage! was ultimately disappointing and failed to reach the tactical highs of the best in the genre.

Jagged Alliance: Rage!
6 Overall
Pros
+ Six unique characters to start with
+ Clearing out a base stealthily is rewarding
+ Can be fun once you've figured things out
Cons
- Presentation leaves a little to be desired
- Laggy interface
- Stealth rules don't come naturally
Summary
Jagged Alliance: Rage! is a solid tactical game once you get your head around its systems. It's a little buggy and far from a smooth experience but when everything goes to plan and you clear out a map it can be fun.