From CreativeForge comes Phantom Doctrine on the PS4. To look at the pictures you may think it to be a game in the vein of the recent XCOM titles, but you’d only be partially right. There are similarities but also many differences that make it a unique game in its own right, but XCOM with Cold War spies would be a handy shortcut to describing it. 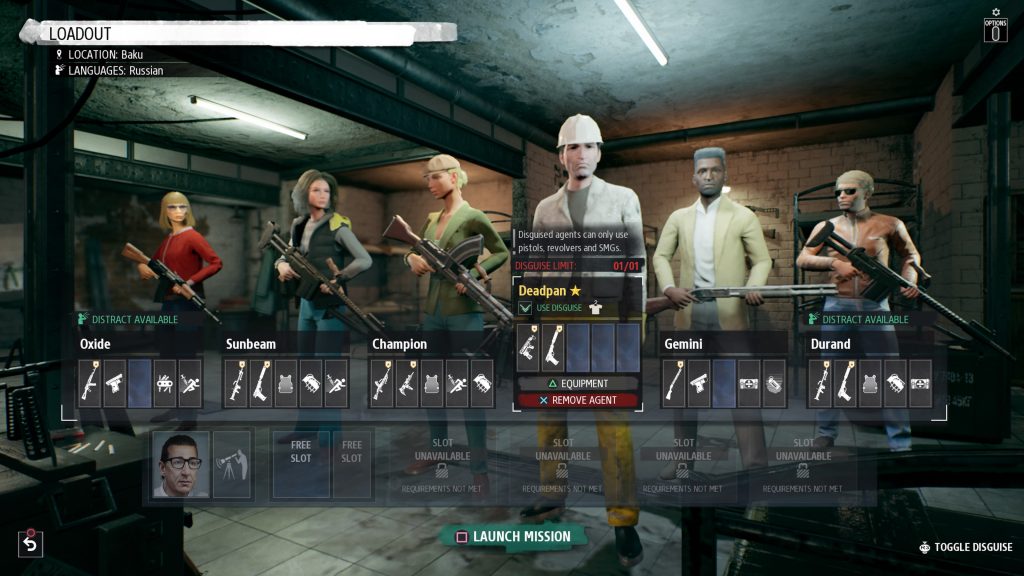 At the beginning of the game you get to create a character from either the CIA or KGB (with a third to unlock) with some limited character customisation. Although you’ll be controlling the whole of the Cabal organisation, this character (CIA agent ‘Deadpan’ in my case) will be the lead. After a brief, undercooked tutorial you’ll be at your secret base where you get the run of your organisation. You can hire new agents, kit them out and research new departments and boosts. These can allow you to forge money or passports for exposed agents, interrogate enemy agents or even experiment on your own with stat enhancing drugs. These are gated by story progress and each take time and money to research.

You move time forward on the world map where you have an overview of your agents and enemy activity. If you have a tip that something might be going down in London, for instance, then you’ll have to send one of your agents to check it out. There they may find an informant who will gift you knowledge or an enemy agent who if left unchecked will get a step closer to discovering your base, forcing you to move at a large financial cost. If you’ve enough agents in range and can get there in time then you have a few options. You can send some agents to take care of it without you, you can get some agents to tail the enemy, hopefully revealing their hideout, you can scout the area ready for an attack giving you vital information on the locale or you can just attack straight out. 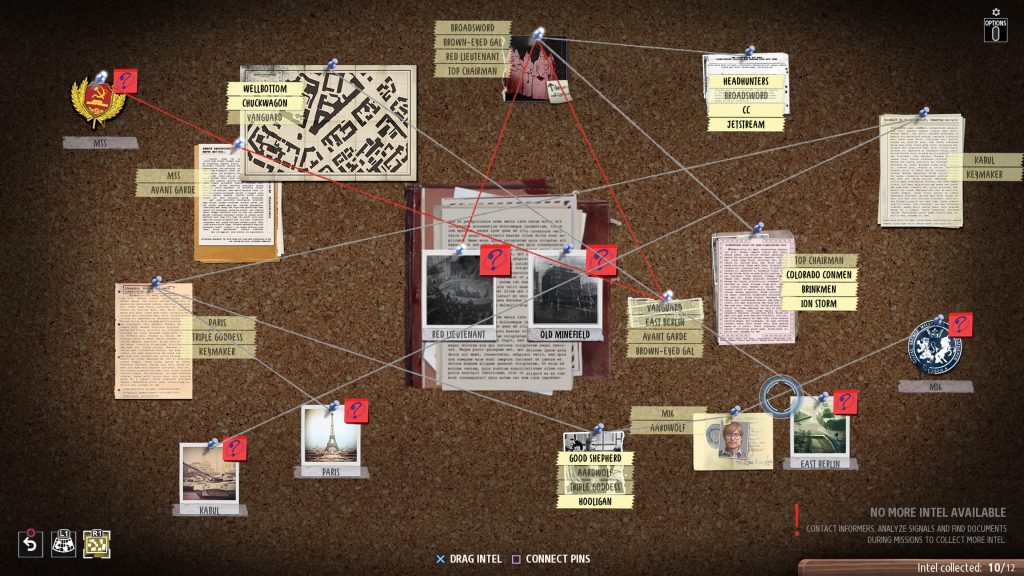 Attacking will drop you into a map with a group of agents, the mission will dictate how many. Here is where the controls will seem familiar but the game actually diverges from XCOM quite a bit. You can move your agents one at a time on a grid like system, and have two movements points and one action point to use. Sounds similar, but as long as you stay out of restricted areas you can move about as you please, undiscovered. This allows you to scope out areas, finding the perfect time to slip past an enemy patrol or take them out with a silent melee attack if you have more HP than them or a silenced pistol to stay hidden.

Get spotted or fire a loud weapon and all hell will break loose as everyone on the map will know where you are and reinforcements will come in at turn intervals. When this happens the game takes a step away from XCOM again as although there is full and half cover depending on what you’re hiding behind there are no random chances to hit. As you aim at an enemy you’ll be given a maximum damage number and a minimum. Every character has ‘Awareness’, friend and foe, which can be used to perform certain skills but it also determines your ability to dodge. Leaving your awareness low will guarantee that the next hit your agent takes will hurt, whilst using attacks which lessen the enemies awareness (and also using clever play like flanking) will ensure every shot counts.

Throughout the levels will be loot (weapons, armour and attachments) and intel to find if you want which will give you a leg up back at base, but also enemy agents. These are far tougher opponents than your regular grunts with more health, better weapons and more awareness. The ability for some of your agents to wear disguises allowing them to walk freely throughout the levels is incredibly strong but won’t fool an agent and if you start taking out enemies willy-nilly then an agent will start to search the level wondering why their patrols aren’t calling in. 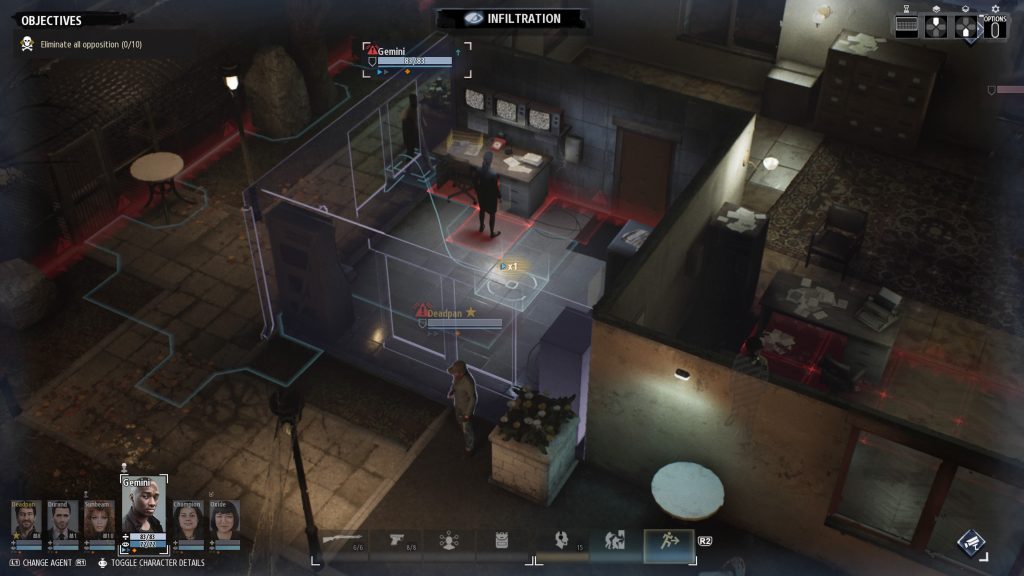 Planning your approach is very important and the ability to fully stealth a level is incredibly welcome and something I have wanted from XCOM. My early missions were spent save scumming a lot as, mentioned earlier, the tutorial isn’t up to the task of explaining how things work so I was left to poke and prod at the mechanics to see what worked and why it did or didn’t. You do eventually ‘get it’ however and once you do you’ll be sneaking around enemy vision cones like a pro.

The missions do become repetitive however. The story, which isn’t incredibly engaging anyway with very poor voice acting, slows to a crawl as you’re constantly having to take out enemy agents or the cells they belong to. The maps are randomly generated but will start to repeat very quickly though I can’t say I ever didn’t enjoy completing the levels, it was just the slow progress that was disappointing.

Using intel to connect the dots back at base also starts to wear thin quite quickly, as you place info on a cork board and connect them using pins and string. It seems cool at first but then the intel starts repeating and you realise that the intel doesn’t matter, you’re simply connecting words until the game says you’ve solved it. 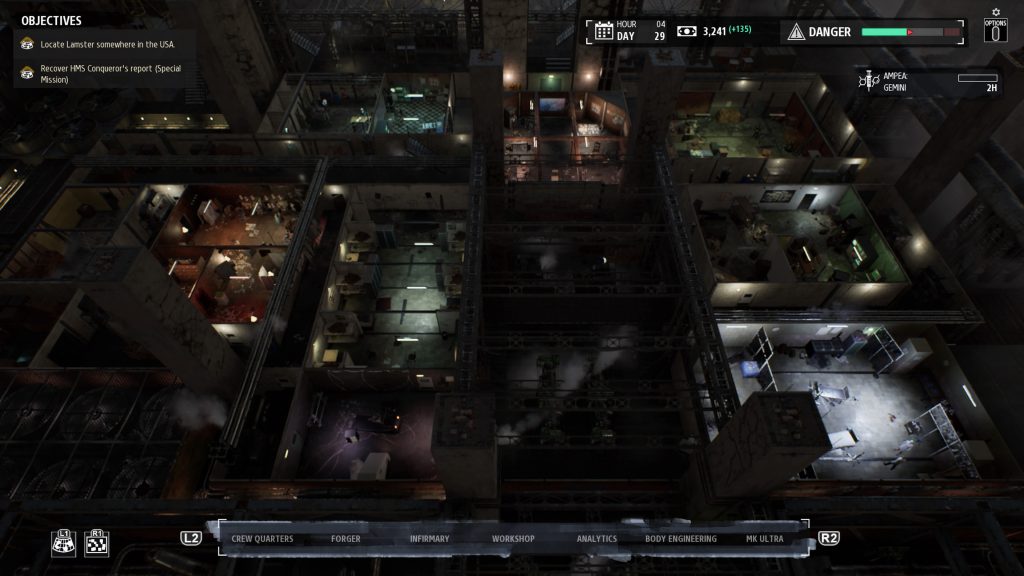 Combine these issues with the fine but unimpressive visuals and the type of performance that one expects from this type of PC port (some frame rate hitching and bugs, some of which have been fixed in a patch already) and you’re looking at a game that has plenty of potential and some great ideas but doesn’t quite get it all to gel together. It might be a little unfair that I’ve been playing XCOM 2: War of the Chosen recently, but Phantom Doctrine doesn’t reach those heights of tension and excitement. Fans of the genre should check it out though as a different take, both gameplay-wise and in its setting, which gets more right than it does wrong but requires a little forgiveness from the player.

Phantom Doctrine
7 Overall
Pros
+ An original take on the XCOM formula
+ You can stealth entire levels
+ Lots to unlock
Cons
- Weak tutorial
- Progress is slow
- Repetitive missions
Summary
Phantom Doctrine offers a different approach to the XCOM formula and is unique enough for genre fans to give it a chance. The missions do become repetitive and progress is slow but the ability to fully stealth levels is very welcome and rewarding.