Attempts to make World War I’s trench warfare compelling have been made before but I’ve never really seen them as great successes. At best, they recreated the meat grinder nature of an attritional conflict and, at worst, they become a lesson in frustration. Taking a more vertical approach with less of an emphasis on hunkering down, Isonzo takes the fight to a different frontier. Focusing on the Italian front, the latest effort from Blackmill Games transplants the drudgery of Belgian fields to a more mountainous location. 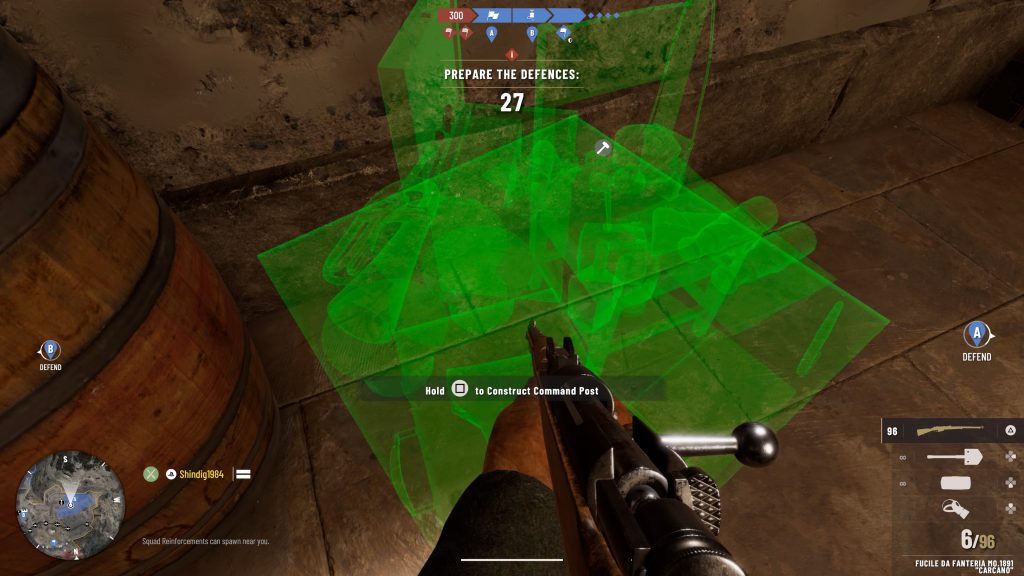 As the name suggests, Italian towns and villages form the stage for battles. Gone is the dreary mud baths of Verdun in favour of a more lush seaside aesthetic. Blue skies dominate and there’s a more focused sense of elevation. There are two combatants to side with: Astro-Hungary and the Italian forces. Both feature the same classes and only their uniforms really distinguish them. From a distance, even that isn’t certain.

Right off the bat, the lack of a tutorial level can make it hard going for newcomers. Each class has its own special abilities and it would be nice to be taken through them in a controlled environment. Even the basics aren’t covered like they were in Verdun.   Instead, text tutorials take you through the mechanics, although these can be tough to read whilst in the heat of battle.  Each map has an objective which is clearly labelled but the lack of any learning tools does mean that education is very much down to experimentation and on the job.

Admittedly, the attritional nature of combat is right on brand for the Great War. It was a truly horrific conflict that traded lives for barely any gained ground. You get that grind from Isonzo. Time is not really a factor in matches but each side has a set number of soldiers. These are eaten up by deaths and the inevitable respawns which means the focus is on containing objectives and wiping out the opposition. 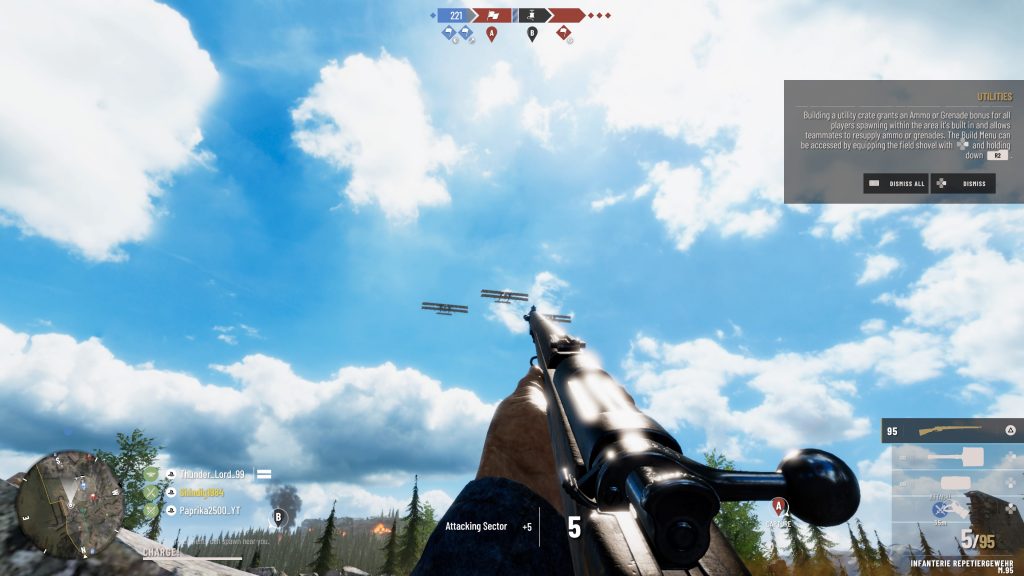 Out on the battlefield, you’re largely tasked with duties of defence or attack. Defending or controlling points is the main focus with the occasional bomb planting or disposal thrown in. Whilst there much to push towards, the key areas are regularly under contention. It led to me feeling I was always on the move, providing I wasn’t shot en route to a goal. The different classes could call in strikes, build defences or buff compatriots which do give everyone something to contribute besides a kill count.

Online competition is savage. I get the feeling the hardcore nature of Isonzo chimes with a very specific person that’s been honing their skills since Verdun and Tannenburg. There’s a cumbersome nature to the guns of the era with rifles being single-shot and with small clips of five bullets. Readying your weapon has a process to it which is just long enough to get caught out. Understanding that is part of the charm but it leads to a game where reactions and mixed with anticipation. You can be overwhelmed quickly and opposition rarely travels alone.

There was a constant fear of exposure I had when playing Isonzo. On moments where I needed to traverse and leave the trenches, I was always looking for cover. There are parts of the maps that become a hive of activity but I danger felt ever present. Everyone can die in one shot so you’ll be lucky if you can spot where shots are coming from before being downed. It can be thrilling, at times.  Sound design does an okay job of pointing out near misses but the tan and blue nature of the uniforms can make friends and foe difficult to spot from a distance. 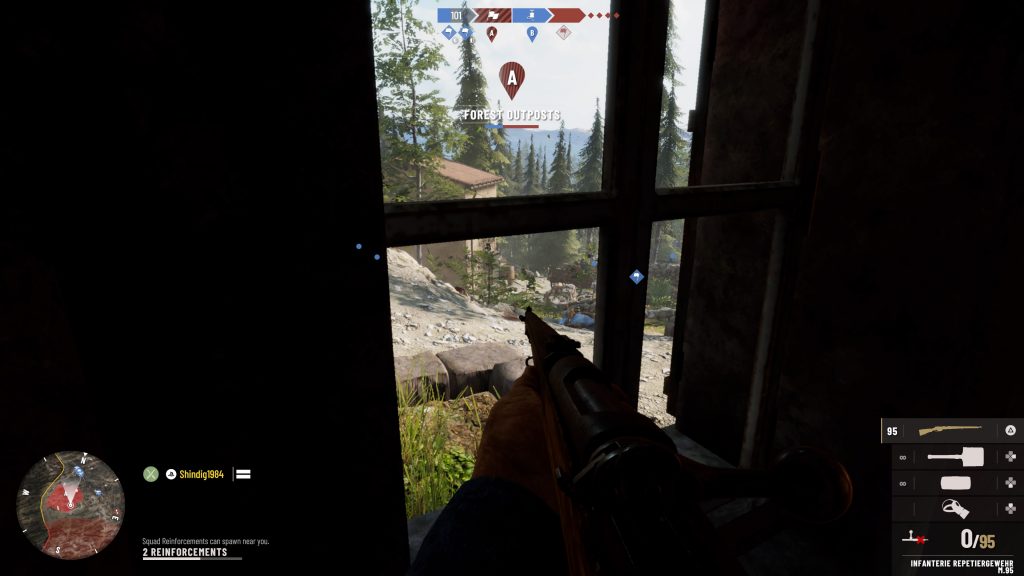 The HUD does place blue dots over your teammates which helps them stand out. Unfortunately, it’s blue for everyone. When I switched from the Italians to the Astro-Hungarians, the blue markers naturally drew me towards blue uniforms. It’s a muddled presentation that really had me second guessing where my objectives were. I found myself looking at the colour of my sleeve before deciding to go guns blazing.  If friendly fire was disabled, I’d often shoot first just to be safe.

There is the ability to play offline with bots. I do find this a good way to get a foothold with the match flow and composition of the maps. They can be robotic in behaviour but they do offer a more forgiving challenge. They’re drawn unrelentingly towards objectives and, once an objective has been diffused, all them seem focused on heading towards the other. This neglect has resulted in some matches being drawn out unnecessarily. They seem reluctant to enter certain interiors, allowing anyone to camp and pick them off with regularity. At least their focus does give matches a sense of progress.

One thing I really like is the verticality of the new maps. There’s only a handful of locations but there’s enough diversity on hand. It makes the high ground much sought after with town houses often providing cover. It deliver a slice of urban warfare within a largely rural setting. The horrors of war are still present with corpses of fallen comrades hanging around long after death. Barbed wire provides a dangerous hazard but there are set points where the wire is cut away. Not having to breach the lines allows troops to move more freely, although it does funnel them through the same areas, rather than a more free-form offensive. Planes often fly overhead to provide bombardments and mustard gas which the officer class can call in. 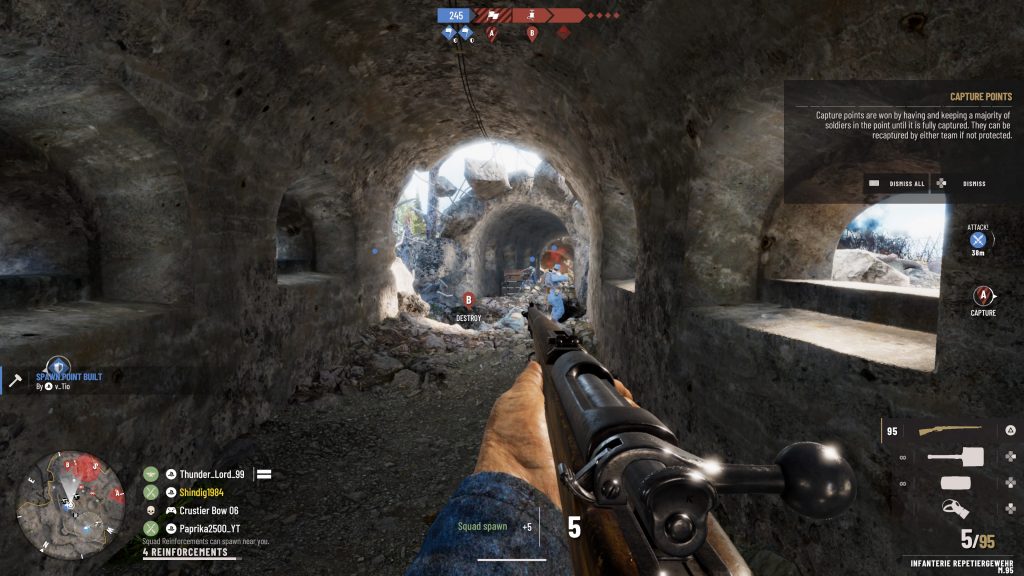 The chaos is accompanied by cries of your teammates and gunshots which do effectively ring out. You can bark out orders to your teammates which does allow some rudimentary communication. Orchestral music effectively swells as the match wears on but it doesn’t intrude and overpower the action. You need to hear where shots are coming from, given that there’s so few other indicators. It’s just a real shame there’s not more maps to discuss. I saw everything Isonzo had to offer in short order and, whilst I was weary of the online futility, I did want to see more maps.

I find Isonzo to be a frustrating shell of a game. One the one hand, it does a good job of showing the attritional nature of World War I and the new front gives us more interesting locales to fight in. Unfortunately, the combat would often have me preferring to hang back and build defensives rather than take people out. I felt matches often outlived their welcome and gaining a foothold always felt like a tenuous exchange.  It feels like a game that thrives on cooperation and I struggled to find that with strangers.  With a lack of structured tutorials, I felt thrown right in at the deep end. That said, there’s nothing quite like it on the market.  It does deliver something unique in setting and tone with each iteration building on the last.

Review 0
6 Overall
Pros
+ Still feels like a unique take on online first-person shooters.
+ Times of exposure can feel tense.
+ The maps now have a much needed sense of verticality to them.
+ The classes give players plenty to do on the field.
Cons
- Combat can feel occasionally futile.
- Matches can stretch out for far too long.
- Lack of any structured tutorial means learning in the heat of battle.
- Distinguishing friend and foe can be tricky at times.
Summary
Isonzo injects some much needed verticality and colour into attritional World War I conflict. The class types allow players plenty of ways to contribute, although online competition can feel like a meat grinder. A way to gradually introduce new faces would've been very welcome, although there isn't that much to Isonzo as a package. For offline combatants, the bots do provide a more forgiving opposition, if a touch predictable. Online with strangers, I struggled to find organisation amongst players. Still, there are moments where it shines with a mix of tension and victory. More maps are forthcoming and it is cheap which could entice someone to give it a shot.