Shoot ’em up fans are well-catered for on Sony’s store and Iro Hero, a vertically scrolling shooter from Spanish devs Artax Games, is the latest addition to the genre.  It sets up the story with some screens that explain that humanity is being exploited by aliens who want to us as batteries, a’la The Matrix, and after his mother dies (or at least runs out of energy) the game’s hero, Iro, decides to end the alien threat once and for all.

With no animated cutscenes (apart from some zooming in and scrolling) or narration, the story is instantly forgettable and so you’ll be more interested in getting started with one of the game’s three modes – story, normal and arcade – each of which plays the same but offers a different number of credits for continuing. 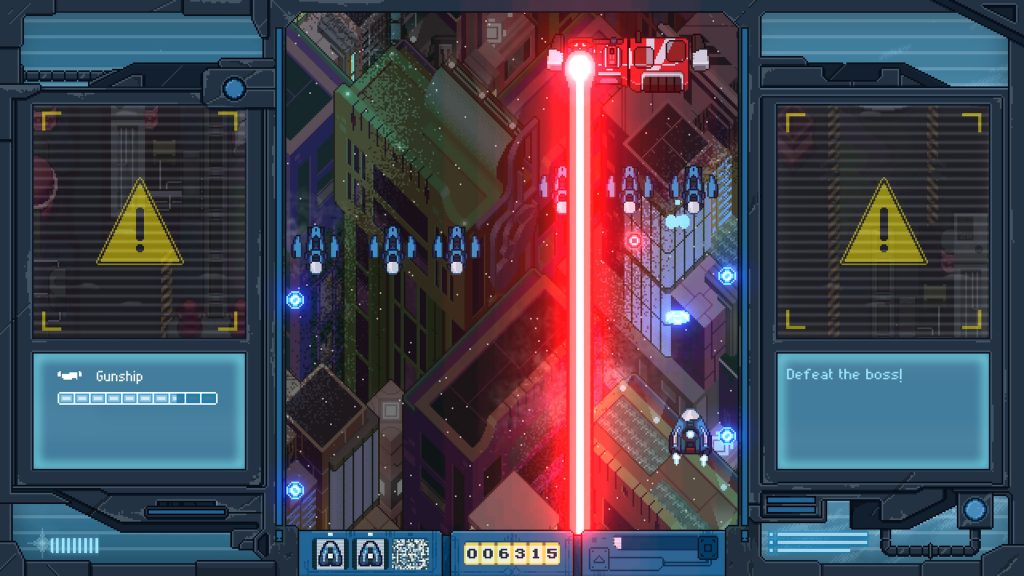 Once you get into the game, it plays much like any other shooter initially.  You control your ship with the d-pad or left stick and use the X button to shoot at enemies swoop down into the play area either looking to shoot you or crash into you.  You’ve got three lives but you can buy back lives at the end of a level if you’ve got the points.

Every shoot ’em up should have a unique characteristic and Iro Hero borrows its from Ikaruga which is to say that it uses the same colour-switching gimmick.  Pressing the shoulder buttons switches you between being red and blue.  Enemies also come in those two colours.  If you’re blue, you shoot blue bullets which will only damage red enemies.  You’ll also be immune to blue bullets (but not collisions).  Likewise, if you’re red the opposite is true. 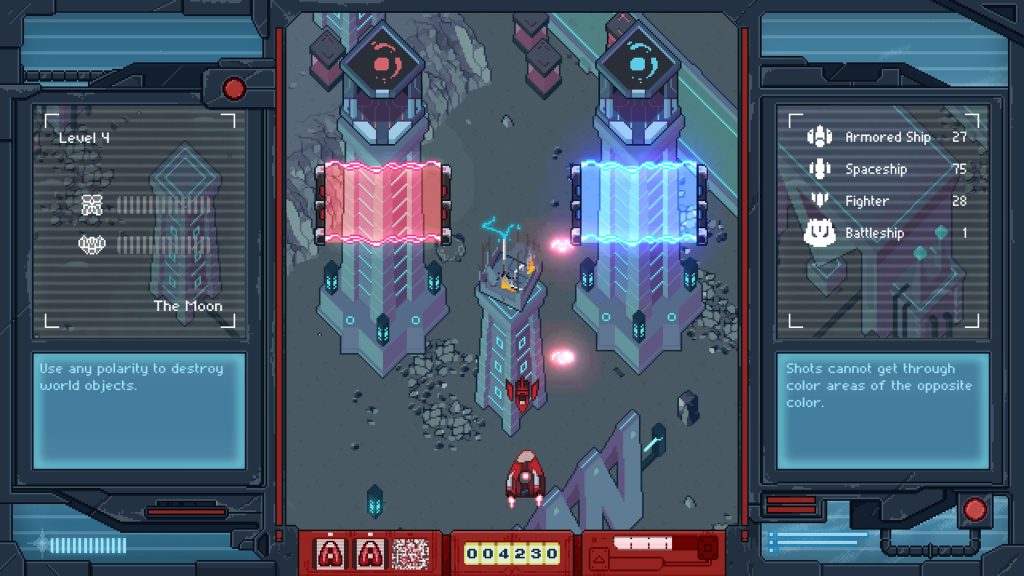 You can also gather up energy for special weapons by absorbing same coloured bullets although the game does a terrible job of explaining any intricacies like that.  Especially as one of the special weapons only gets unlocked later in the game and so you’ll spend ages wondering how the hell you get it.  Also, enemies drop some sort of power-up things at you and it turns out these are awarded for scoring combos and increase in value if you keep the combo going.  If it explains that, I missed it.  I had to get that info from some other site’s review.

Opting for red and blue rather than Ikaruga‘s black and white colour scheme does make the action very clear and the chunky sprites mean that you’re never in any doubt as to what is going on.   The scrolling backdrops are relatively muted too and so they don’t present any problems visually. 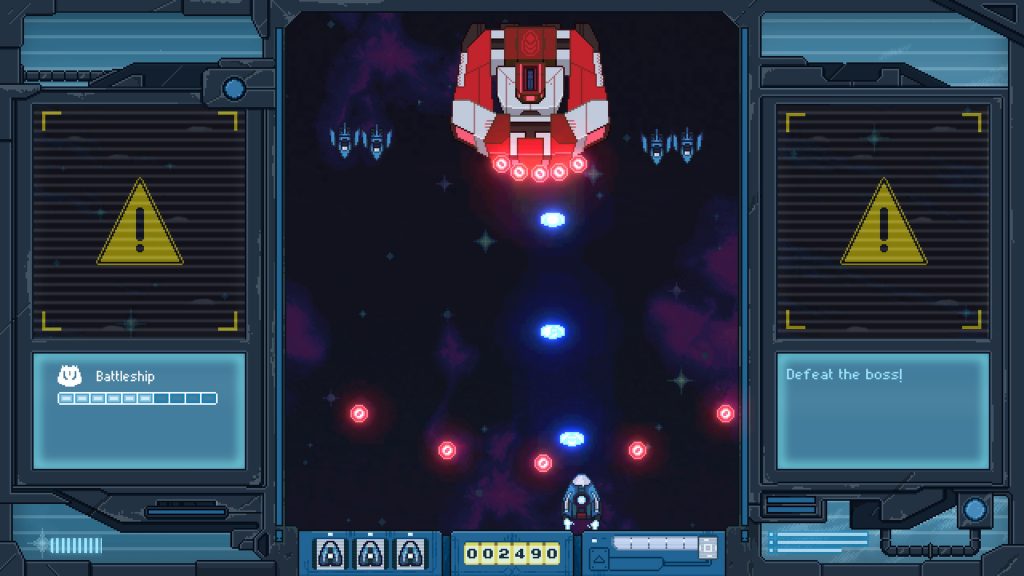 Now, if you liked Ikaruga and fancy a cheap version of the same thing then Iro Hero may fill that niche for you but by presenting the same sort of gameplay, without the slick presentation, you also get the same problems.  Namely, Iro Hero like its main inspiration isn’t a game about reflexes and action but rather one about memorisation and there’s a conversation to be had there about if that sort of thing is any fun or not.  There are nine stages which only add up to around half an hour of gameplay but that’s still a lot to memorise and if you don’t then Iro Hero will slap you down every step of the way with harsh and often cheap deaths.

Enemies sneaking in from behind or the sides, or speeding from the top while bullets and obstacles of both colours came at you, it can all be too much to deal with reflexively and so you’ll need to start committing it all to memory.  If that’s your thing, then you may get a bit more out of this.  Even with that, this is still a very solid challenge.  It may not do the bullet hell thing and is more of a European style shoot ’em up but it will give most players fits.  And of course, even if you get through the tricky levels, there is still a boss battle at the end of them which will often undo all your hard work. 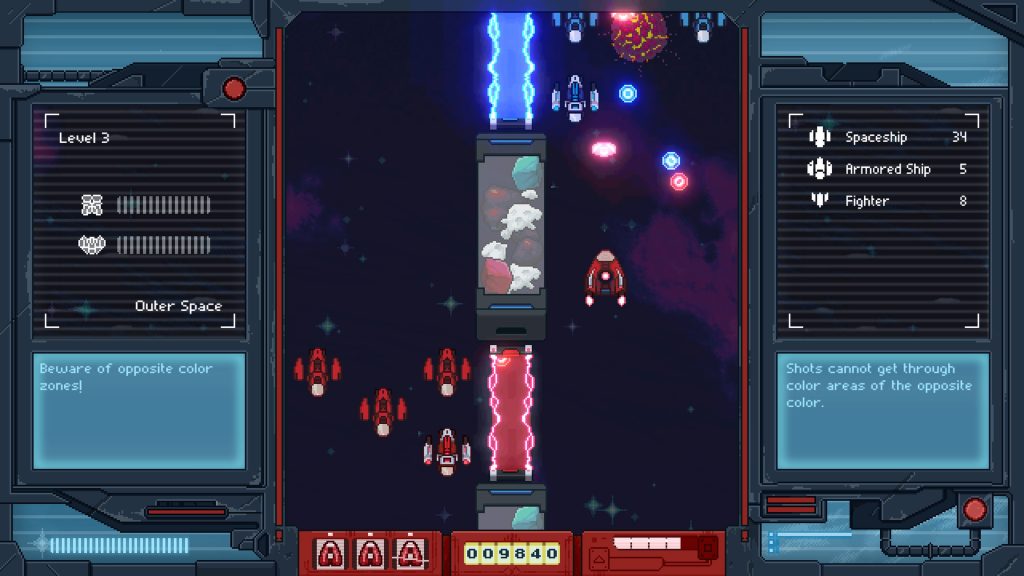 With Ikaruga you were more likely to stick with it because of the promise of seeing something interesting later on but Iro Hero looks like any other shoot ’em on PSN really with flat, bold visuals that don’t really impress and we weren’t really sure the juice was worth the squeeze as we found each level was just doing what the previous one did but with a few more new things that were there to kill you.

It’s pretty clear what the game needs.  Firstly, some interesting weapon power-ups.  You do occasionally do pick up a thing that doubles your firepower or lets you shoot sideways but they aren’t particularly exciting.  Think R-Type, think  Nemesis and give us something that makes things interesting. 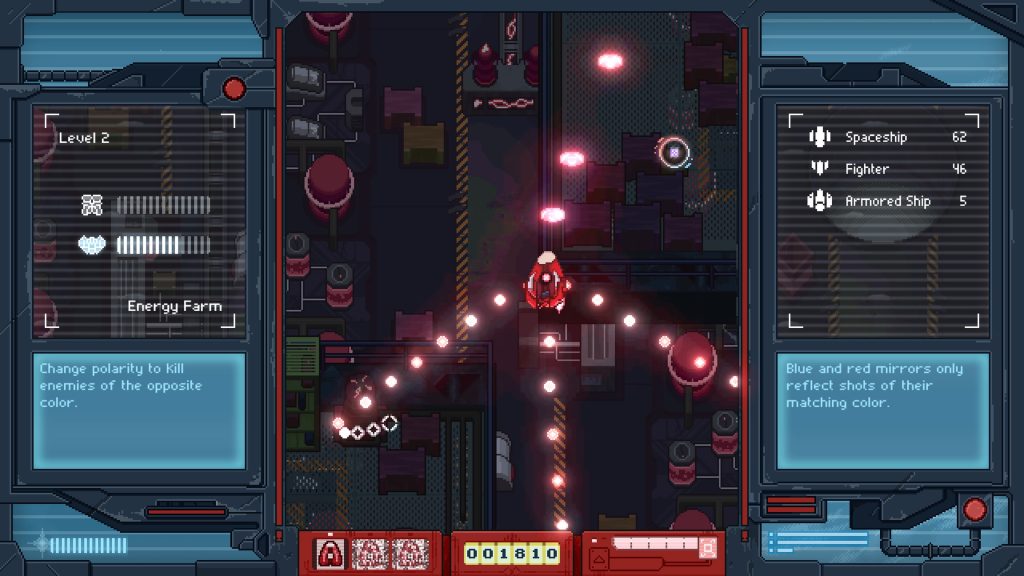 Also, don’t put bits of story in the side panels when you can’t actually look at them for fear of dying.  And throw in an easy mode for those who want it.  It’s all well and good being all about the challenge but that is somewhat undermined by the fact that the game couldn’t be more in a hurry to throw its trophies at you.  You’ll have the platinum in fifteen minutes and the constant popping of trophies in the opening three minutes is both distracting and gives a cheap first impression, especially as you’ll have no idea how you unlocked them.

At £4.99, Iro Hero is a good option for people who like this specific type of memory-based shoot ’em up but Ikaruga is £7.99 and at least offers a bit more eye candy, and far less annoying music.  And there are far better shooters on PSN than Ikaruga.  So we can’t give this one a strong recommendation but hardcore fans of the genre may well get something out of it.

Cons
- Requires a lot of memorisation
- Very difficult
- Underwhelming visuals
- Music is a bit much
- Game mechanics are not well explained
- Gives up all its trophies without a fight
Summary
Iro Hero is a very challenging shoot 'em up that uses Ikaruga's colour switching gimmick but offers very few ideas of its own and doesn't do a very good job of explaining its intricacies.