If there’s one thing I’ve got from the PS Talents programme is how experimental the games tend to be. They all carry this very European sensibility whilst all feeling not far off being student projects. The label helps manage expectations but there’s always some curiosity to see what can come of this. Aces of the Multiverse from Gammera Nest presents a condensed soccer game with some Xplora watch integration. It’s an intriguing twist but can the game itself really encourage younger players to move more? 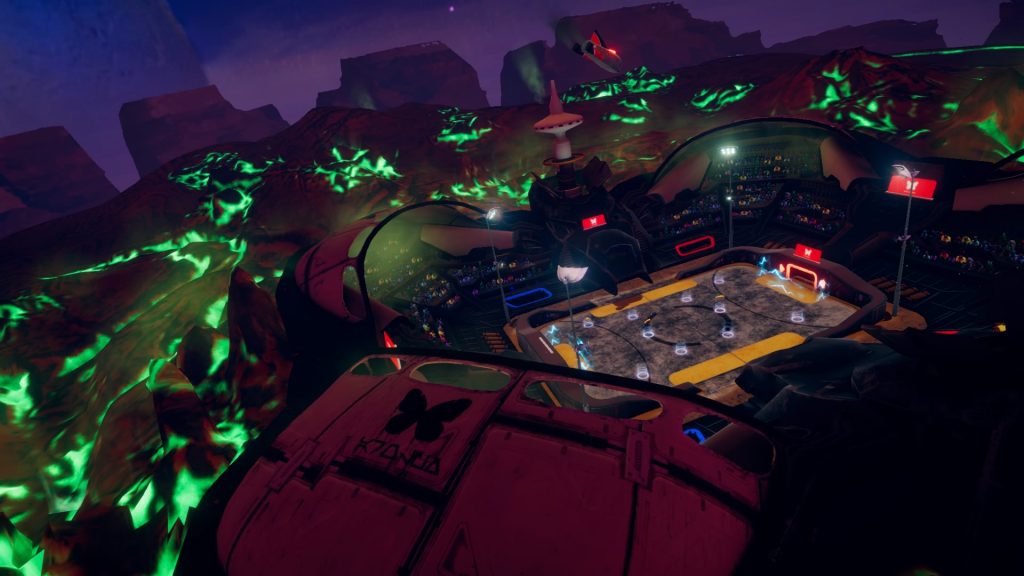 Aces of the Multiverse is effectively an intergalactic five-a-side game of soccer. The rules are familiar with only the venues really showing something otherworldly. The walled arenas have a fair amount of colour with two small goals either side. Under the surface, it’s the sport I love but I do wish some more liberties were taken when it came to the setting. There is one arena where the goal is guarded by two anthropomorphic plants. They’re the most effective goalkeepers in the game and give the action a much needed twist.

I would’ve enjoyed seeing gravity being toyed with and more arena-specific quirks. Sadly, it all just fizzes out. The players add cosmetic peculiarities but, at their core, they play soccer much like humans. The controls are competent and some decisions have given it a unique feel. The power of your shots and passes seem quite lenient with sustained button holds needed to really put some weight behind it. Otherwise, the ball most spends time going to feet and staying grounded. 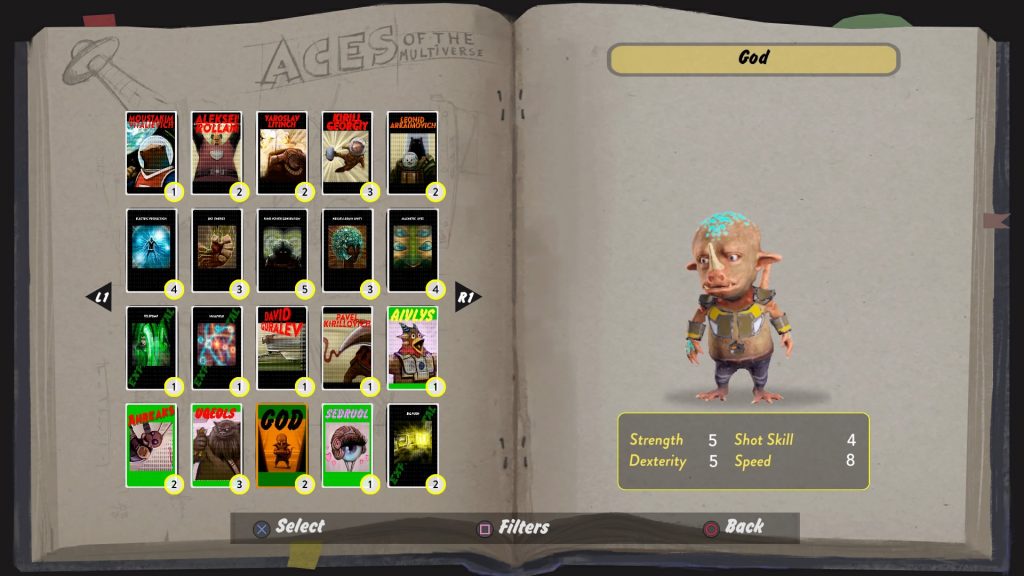 Defending initially caught me out with your teammates seemingly not cooperating and getting into positions. As it happens, Aces of the Multiverse gives you direct control over your teammates with the right stick. This does allow you to bring the team back as a whole and get some defensive re-enforcements. The system’s quick to get used to and, once you need to make a tackle, a dash button is on hand to simply dispossess the opposition.

The action is quick with tight matches resembling the counter-heavy nature of basketball. For the upper hand, each player has two special abilities to utilise. They all seem useful with some great for making space, stunning players around you or slowing down the opposition entirely. They don’t last very long but the tempo of each match makes them meaningful. There’s also a speed boost you can activate which builds up over time.

Missed shots can cannon off walls and instigate a counter-attack and there are nice moments of panic that happen when you have to hastily bring players back. The goals at each end have a forcefield which can deal damage to players and everyone on the pitch has a health and stamina bar. Depleting them knocks a player out of the game, leading to a substitute being teleported into place. 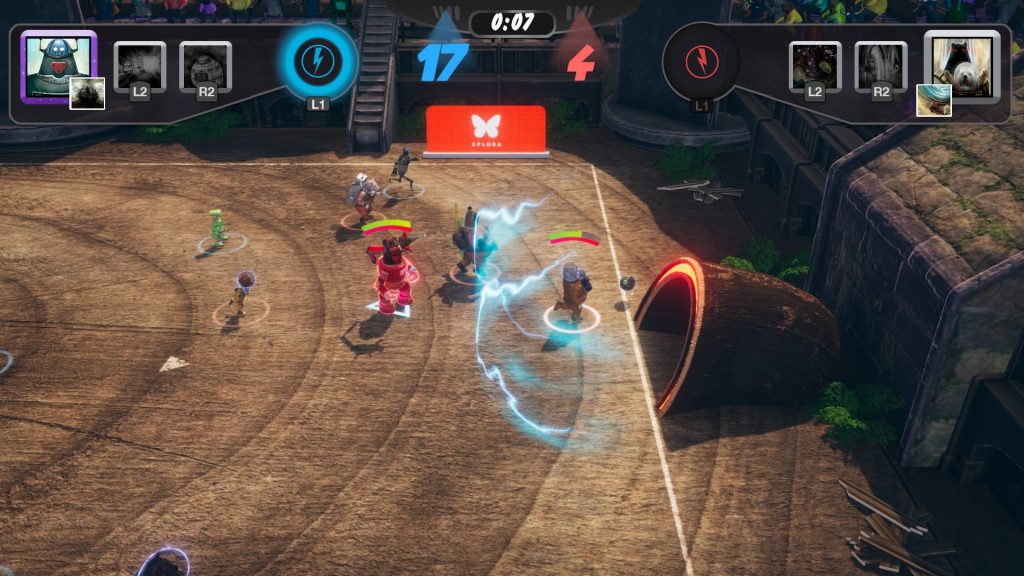 There’s a handful of teams with some being variants on a theme of mutants, aliens and dog space cadets. I feel like the former has the biggest charm with a proper cosmonaut uniform straight out of the Soviet Union. The robots and aliens look more stale by comparison. There’s a team-building aspect to Aces of the Universe with cards rewarded after each victory. These are given at random but you could find yourself with a new ability, stadium, team or player. It’s not intrusive and this is where the Xplora watch comes in handy. If you or your child is lucky enough to have one, you can earn new cards as you walk around.

It’s a nice little bonus but not one that’ll hinder people without the wrist wear. The fact is, the card album fills up quickly and, in all honesty, this game is not a challenge. Once I got acclimatised to the controls, the goals and victories mounted up. The opposition players are just too passive, predictable and easy to outscore. I’d go so far to say it’s too easy for their target demographic, too. It might be more enjoyable with friends but the multiplayer options feature just a quick 1 v 1 option. 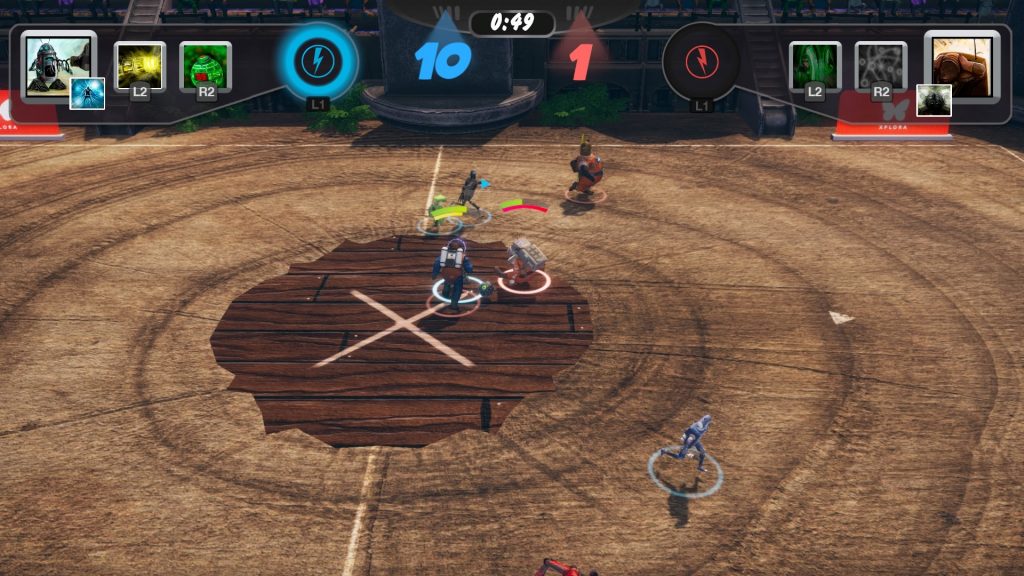 Content is lacking in Aces of the Multiverse. The story mode, whilst nicely presented with some TV style introductions, is over in three matches. This leaves you with quick matches against the AI to gain any further cards. The stadium selection is meagre and there’s no other ways, aside from team management, to customise the experience. You can’t add modifiers or even tweak some much needed difficulty.

There’s not a lot of this across the board which makes me wonder how tight Gammera Nest were on budget and time. It goes back to me feeling like games under the PS Talents label feeling like small student projects of proofs of concept. There is some charm to be had in the character designs and environments but the game feeds it to you swiftly and abruptly.

Aces of the Multiverse
5 Overall
Pros
+ The soccer is easy to pick up and play.
+ Character designs are interesting and charming.
+ The stadium environments are all unique and interesting.
+ There is a swift pace to the matches.
Cons
- Very lacking in content.
- Very lacking in options.
- With no way to alter difficulty, you have a game that doesn't offer any real challenge.
- Story mode shows some promise but is over way too soon.
Summary
Aces of the Multiverse is a thinly spread soccer effort. The fast-paced nature of the game does deliver a great tempo but there's no challenge here. There's charm to be had from the environments and character designs but there's so little content to keep children and adults entertained for long. It works, it has ideas but it all feels like a proof of concept rather than a fully-fledged effort.