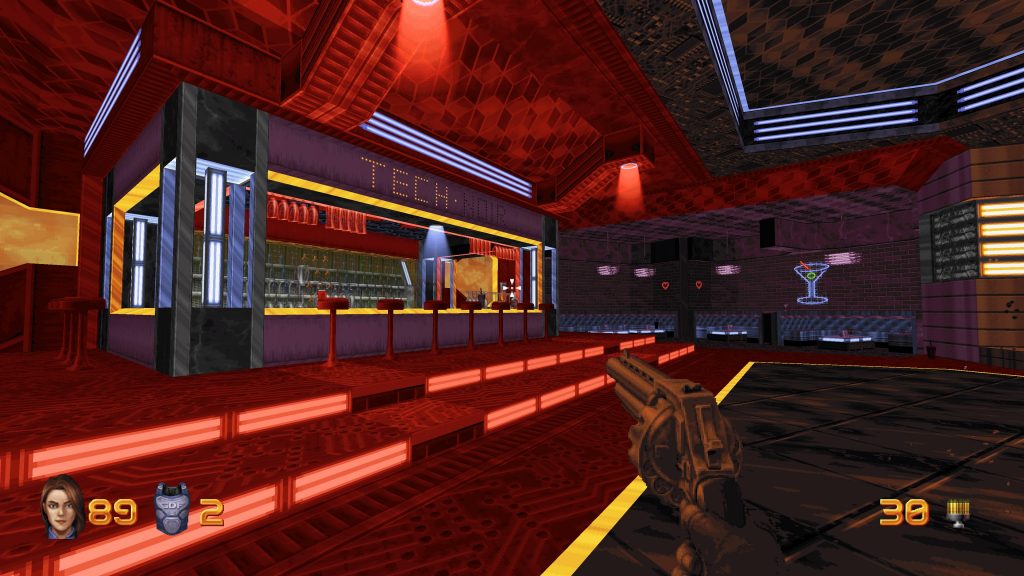 It would be a bit remiss to state that first person shooters have been ignored in recent years. It is by far the most dominant method of play and has been such since the late nineties, with technological leaps and developer focus lending itself to a whole host of innovation, ranging from the revelation that was Wolfenstein 3D, to the immersive eye-driven story of Half life and the chart bothering Call of Duty franchise that we see each year.

It’s hard to believe that at one point, a few decades ago, the FPS was considered a bit of a fad. With Doom being a fresh release back in 1993, it had a rare distinction of being the game that lead the example, with every other similar title being labelled a clone. Of course, with hindsight we all know that this view has changed dramatically after years of industry one-upmanship and a strive for innovation. But, in the early days, this stigma of being called a copy of something on arrival forced developers to think of things that would make their game stand out, despite following a very tough act.

3D Realms was one such company, with the release of Duke Nukem, they also faced this accusing tag that immediately branded their game as ‘yet another’ first person shooter in the same vein as the green marine’s first outing. This is something that I always thought was quite unfair. The team at 3D Realms pulled out a lot of stops to make their FPS standout. While yes, you did shoot demon-like creatures with weapons that increase in size as you find them, yes, you did jog through pseudo 3D landscapes while doing so. What set Duke Nukem apart though, was the characterisation, the interactable environments and a tongue in cheek attitude that turned what would be a by-the-numbers shooter into a comedic adventure with systems that genuinely felt immersive for the time. For all his faults as a character, Duke had personality and a talking protagonist that genuinely inhabited the world you played in was hard to come by. 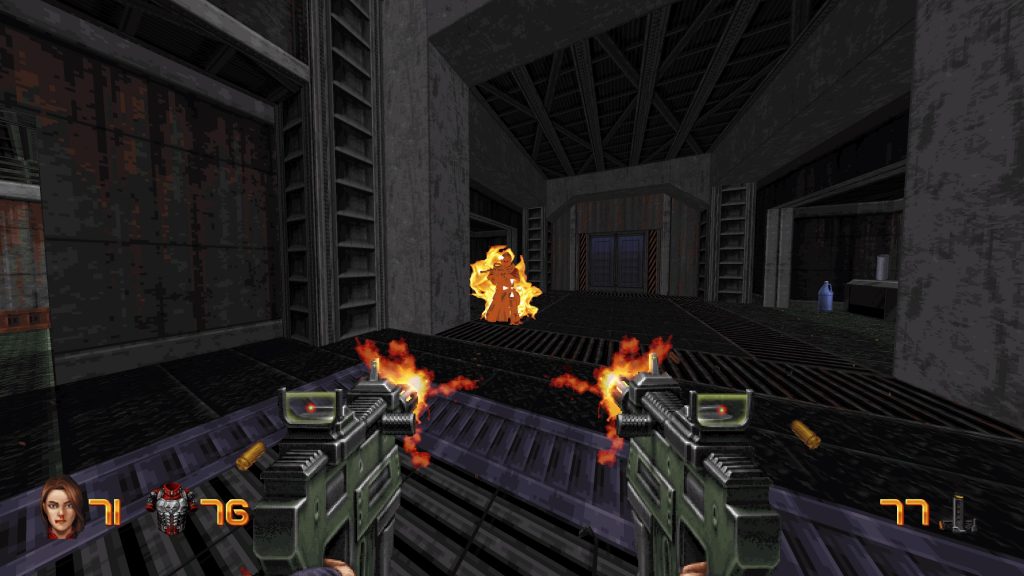 This was all made possible using the build engine. This trailblazing software was the blood running through Duke’s veins, allowing more complex mechanics, scripted sequences that reacted to player engagement and setpieces that turned the whole experience into a more congruous experience overall. It never did quite get the same love as the likes of idtech or Unreal, but It did pave the way for games like Blood, Shadow Warrior and others to come into the market. Ever since 1999, the engine has laid dormant, that is until now.

Thirty years later, the engine has been resurrected and utilised for the modern era with Ion Fury, a game by Voidpoint that is also published by 3D Realms. Ion Fury retreads familiar territory, featuring a protagonist by the name of Shelly “Bombshell” Harrison as she shoots and quips her way through various levels of traditional FPS carnage.

Jumping into a game using this tech is like being yanked back into a simpler time, where first person characters were starting to grow a personality, where events and interactions were simplistic but mundanely mind-blowing at the same time. It may seem strange to exclaim at things like this now, but this was the engine that brought you working vending machines and toilets, often leading to the character spouting phrases like Bubsy the Bobcat on a cocaine high. 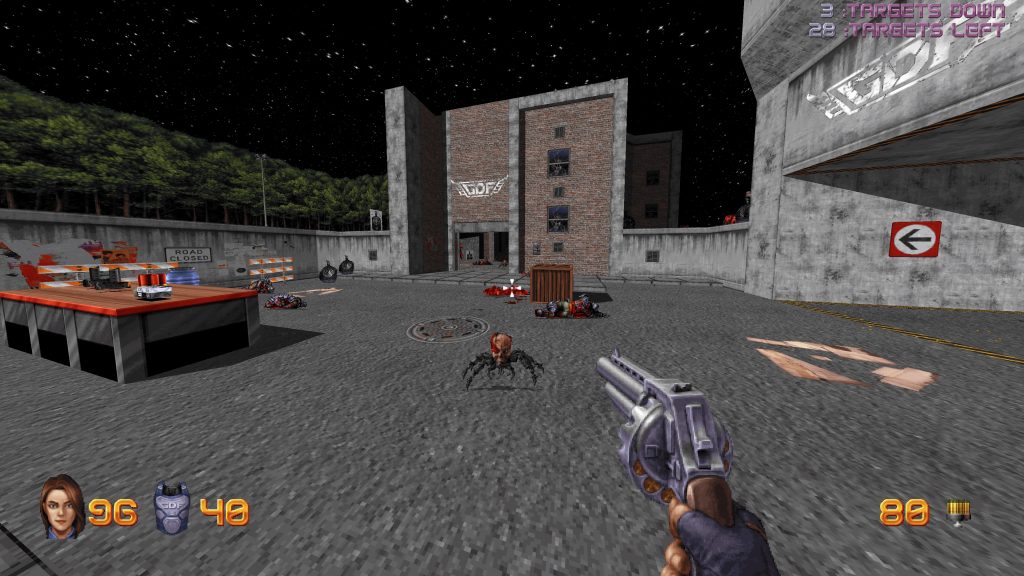 By far the most striking thing about booting Ion Fury up for the first time is in the visuals. After all these years, the engine scrubs up really well, with the locales, pickups and enemies getting a HD-4K sheen that looks great on modern hardware. This translates beautifully with the Neon enthused dystopia of Neo DC opening up to the player with wide-open and dense spaces that make each level feel believable, while also highlighting that retro futuristic aesthetic made famous by the likes of Blade Runner and other pulp sci-fi from the late 80s-90s.

This visual flair is backed up by great level design. Each area or zone pops and has a varied range of FPS styles weaved into the mix. The level that stood out for me was one that saw me navigating a large area that needed me to power a lift to get to the next. This pushed me through corridors, winding labyrinths and open no mans land’s to achieve my goal. Another saw me infiltrating the GDF base after it had been attacked by cyborgs. The level was a mix of disabling sentry turrets to sneak past, ducking into shooting galleries and fighting through canteens and office blocks.  The mere act of emerging into an open expanse and seeing this retro FPS aesthetic stretching out as far as possible really cements that this kind of game, while visually authentic, would melt the Windows 95 machines that the engine was built for.

Staying true to the formula, the story is as necessary to the experience as more water would be to the ocean. All you need to know is that your character is every bit as chatty as Duke Nukem, that there is an evil scientist creating cyborgs that invade town and you must shoot them all. When said scientist is voiced by John St John, Duke Nukem (or Big the Cat if you prefer) himself, that is more than enough.

This type of game relies on its gameplay rather than a narrative to get things done and while there are some caveats, it is mostly great. Guns feel punchy and violent, while movement around each level feels fast (ish, we will get to why later) as retro shooters do and you rely on health pickups rather than regenerating health, much like in times past. This all may come as a shock to you as Ion Fury does not mess around when it comes to difficulty. Enemies are alarmingly accurate, having that same corridor marksmanship from other FPS games, yet even in the open spaces of the city. Hitboxes on foes are small, causing even lesser cyborgs to be a nuisance in conjunction with your limited ammo supplies. 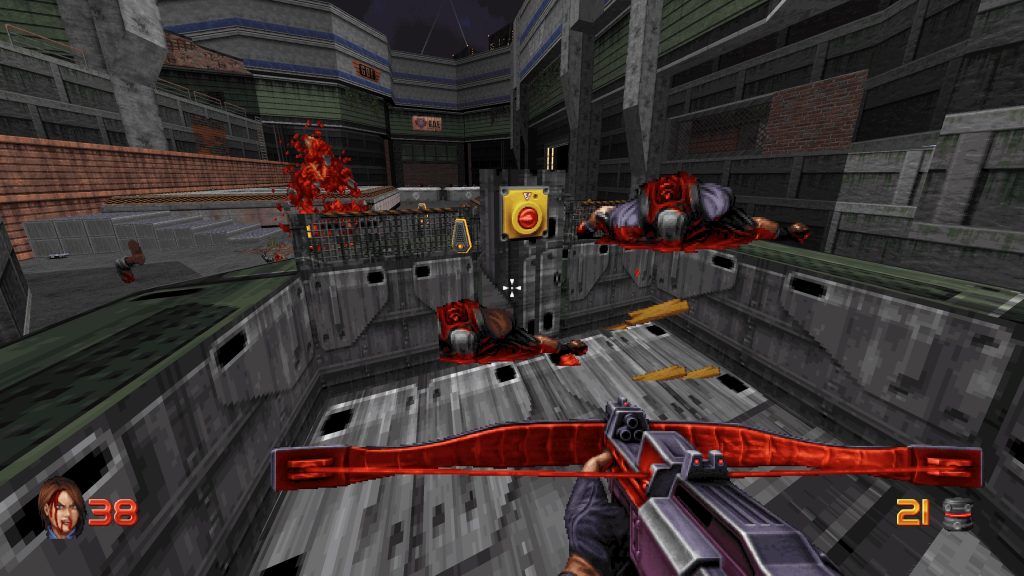 Now, while I understand that difficulty is one of those things that you would want a retro shooter like this. It’s also important for a retro shooter to retain that feel of having the right tools for the job. There is a myriad of weapons available to the player as you would expect, but the issue comes in when there isn’t enough ammo to really make the use of them effectively. Take the incredibly fun incendiary uzi weapon for example, these are your typical spray and pray type guns that eat through bullets with wreckless abandon. These should be a go-to weapon to get out of scrapes of clear out rooms of enemies in quick succession, but the clip on these things runs dry far too quickly to be an effective choice. This forced me to ignore most of the other weapons I picked up and work mostly with the revolver and shotgun as standard throughout.

Enemies being difficult to hit while also being marksmen is another problem, they are alarmingly accurate, seeing you long before you see them and being able to sap your energy in mere moments from afar and often unseeable dark areas of the map. Considering that you are relying on saving during levels, forgetting to do so resulting in being thrown back to the start of the level pushes the experience into unfair and repetitious territory. It results mostly in having to pop and shoot enemies from corners as opposed to enjoying the run and gun action that this engine was built for.

The repetition doesn’t end there sadly, enemies feel somewhat generic, with the opposing forces being represented by humanoid cyborgs, human headed robot spiders and other robotic contraptions. The issue is that most of these enemy types can be found in the early chapters of the game and barring a few boss fights later, these are pretty much the only enemies you will encounter throughout Ion Fury. Mix this with the ammo limitation, constant deaths/ saving and phrasing coming from Shelly and cyborg mouths, it all becomes samey in a short while of playing. 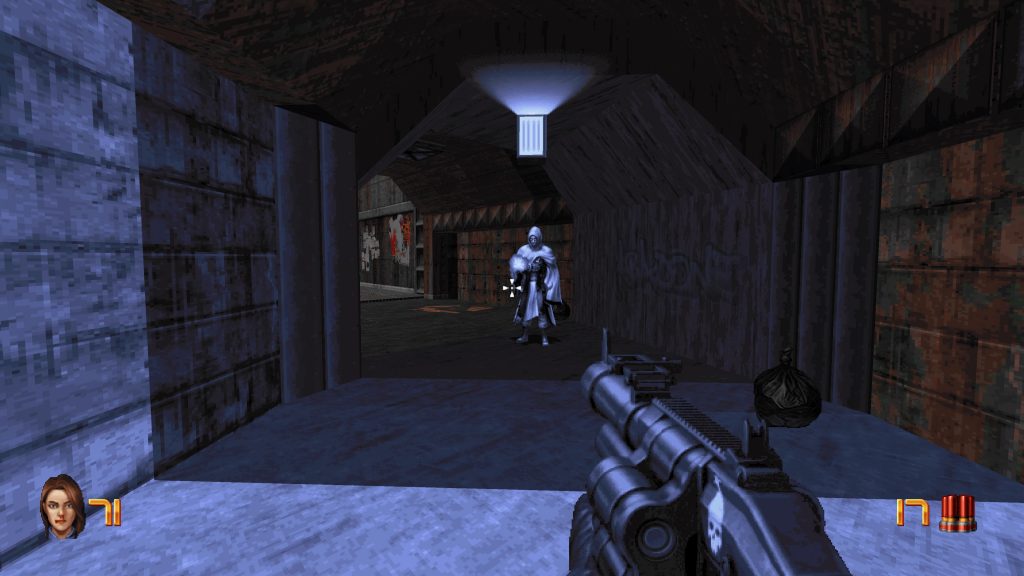 Unfortunately, performance takes a hit also, there are times where the frame rate gets choppy and this happens consistently. After a bit of reading, i found that this is a side effect of the build engine on modern hardware and that Voidpoint are working on implimenting a fix. Otherwise, the game runs at 60 FPS and feels very nippy when it stays level, lets hope that this is just a temporary setback.

That is not to say that this game is a lost cause or that there is nothing to enjoy here. This is a solid retro shooter with one of the best uses of aging engine technology that I have seen and fans of retro shooters like Duke Nukem will feel right at home here. Void Point have nailed what many love about this era of shooters. It’s just that some areas of the game rely too heavily on mechanics that have been made obsolete over the decades for a reason.

Ion Fury
7 Overall
Pros
+ Authentic retro build engine shooter experience
+ Looks fantastic, especially in 4K with great level design
+ Peppered with retro TV and movie references
Cons
- Choppy framerate in frequent places
- The Gameplay remains the same throughout.
- Enemies are samey and not nearly as iconic as other games of this ilk
Summary
Void Point have sought to recreate the Duke Nukem 3D experience that many loved and for most parts, they have succeeded. Ion Fury is a nostalgically familiar and lovingly crafted trip down memory lane for all those 90’s shooter fans that love quipping heroes and as little story as possible. However, the game suffers due to shaky performance in places and samey action throughout.