In Concept Destruction from Spanish indie dev Thinice by way of Ratalaika, we have a rare PS4 only release for this publisher. Though we didn’t try to download it on our Vita this time. Sadly it seems the developer had attempted to port this to Vita, but it simply wasn’t to be. In this instance, it’s a fair clone of early Playstation Demo 1 darling Destruction Derby. Although rather than normal cars that smash in a simulated way, your car is a cardboard model. So an actual model car, even down to being powered by a single AA battery. 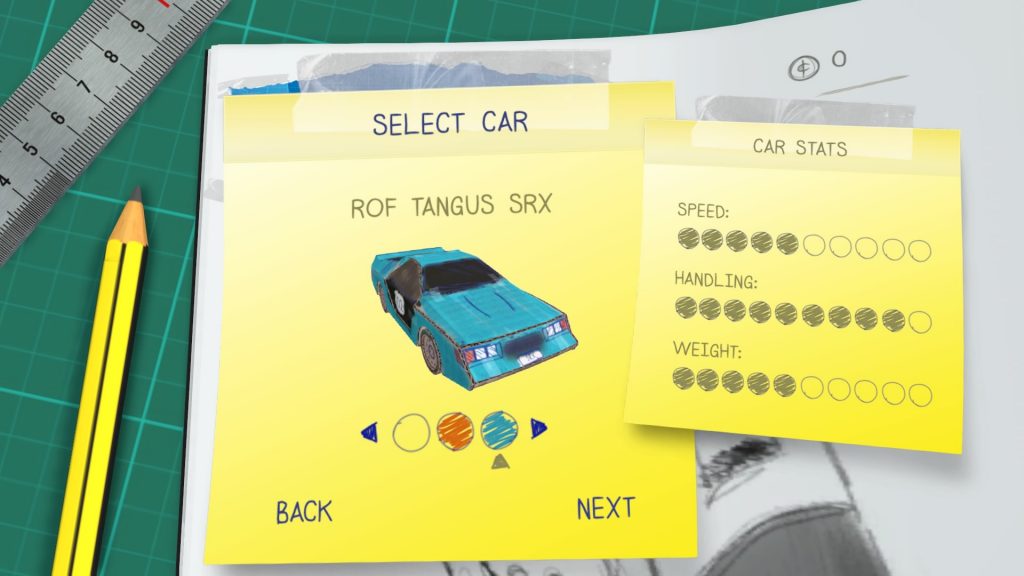 Everything is to scale, so the arenas you’ll drive around in are made from cardboard too with pencils and biros being structural. Although the late game stage where you drive around crusty pizza boxes is something of a departure. Not sure what Brian May would make of the badger pizza gag though. Unlike Reflections’ 1995 almost-launch title, this is wholly focussed on the full arena battle royales. To progress through the championship you’ll generally have to be the last man standing, at the very least still being alive when time runs out. 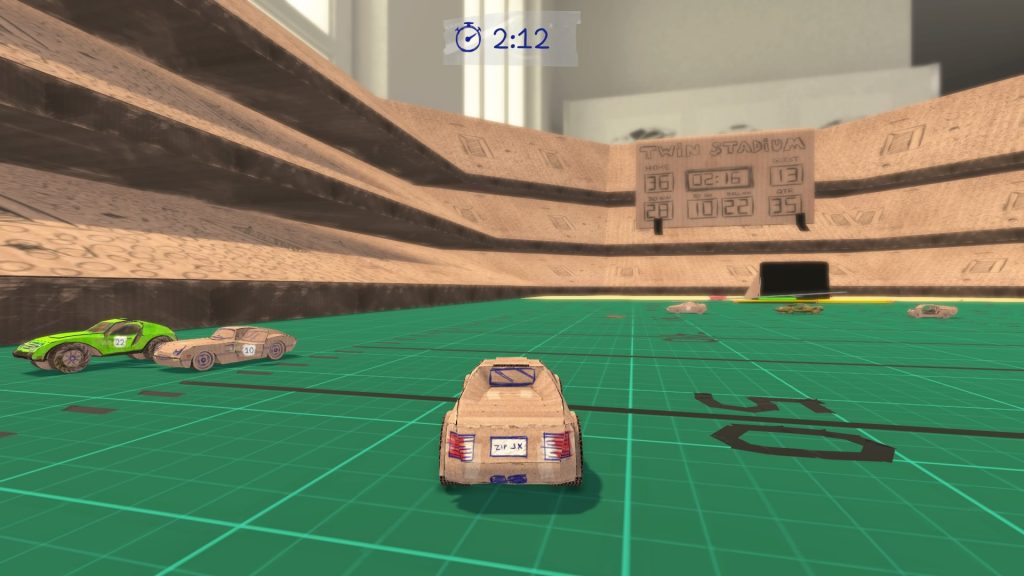 The fact that you have to be surviving at the end of each match makes winning the championship a given, as you’ll very rarely find yourself alongside the same AI drivers time and again. Much less find them threatening you at the top of the leaderboard. Your main challenge is to score sufficient points to unlock further vehicles to use in the single event and free race modes. In fact, once you’ve gone through the championship you’ll likely have seen most of what the game has to show you. Admittedly you might revisit a stage for a trophy specific to that area, but  you’ll probably get them through natural gameplay. 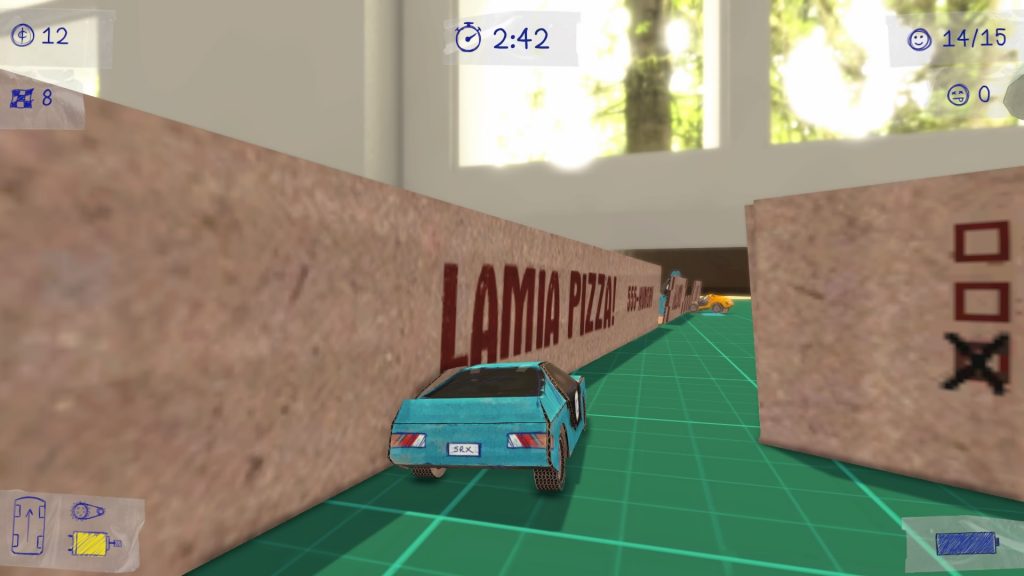 During your inevitable trophy mop-up phase, you’ll discover there’s a school mode where you learn basic skills. But with just three stages it feels like a bit of an afterthought. A better idea would have been to gate the championship behind this as an arbitrary learning. Also, it’s not exactly difficult so a little challenge would’ve been fun.

Your final trophy unlock is likely to be surviving three minutes in survival mode. What this means practically is you’ll drive around the arena to avoid getting hit until just one other opponent remains who’ll gamely keep following you. But once you get the platinum trophy, you’ll still want to play. Survival mode is great fun when you’re not worrying about trophies and just enjoying the smashing. 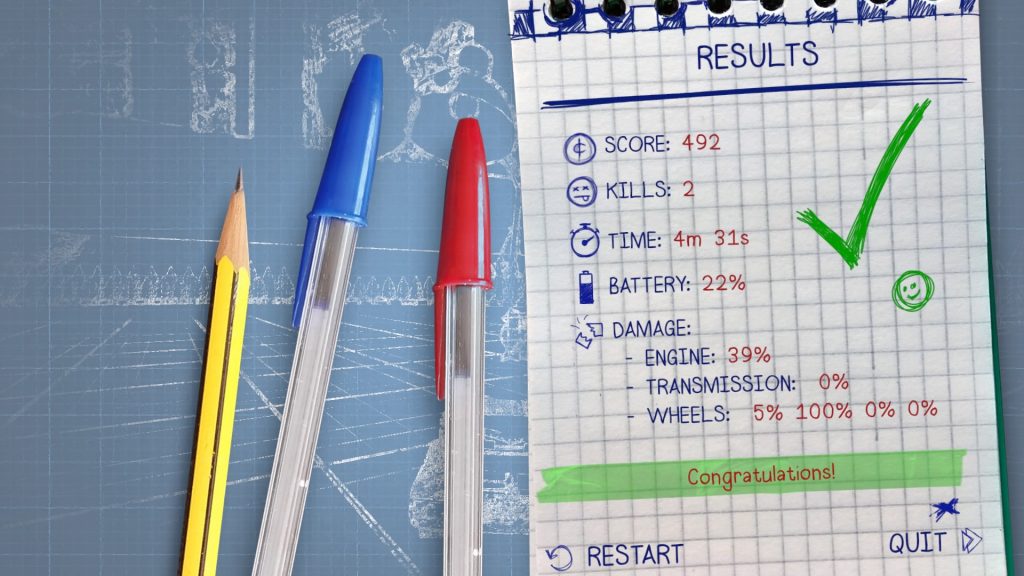 We can’t help but wonder what might’ve been had there been proper races rather than just destruction derbies. Or car models where they’re die-cast as opposed to cardboard cars that crumple quicker than a Leeds Utd title challenge.

In conclusion, Concept Destruction is a nice idea let down a little in terms of the sheer scarcity of it all.  Shame the Vita port didn’t come to pass, though we won’t mark it down for that.

Concept Destruction
7 Overall
Pros
+ Cute car models, even down to being battery powered
+ Survival mode is great fun
+ You get a definite sense of scale

Cons
- Winning the championship is but a formality
- Lacking in variety of events
- School mode is woefully underutilised
Summary
Concept Destruction is a bite-sized throwback to days of yore that leaves us wondering what might've been had the developer had more resources to flesh it out.