Falling squarely into the ‘indie games about feelings’ bracket, Inked: A Tale of Love is a remake of the 2018 PC game and is best described as an isometric puzzle game.  It comes to us by way of Croatian coders Somnium Games and tells the story of a nameless samurai who, along with his partner, venture into their world to find out why the birds are being hurt.  This is, of course, an allegory for something else entirely.

Rather symbolically, the first thing that you do, as the samurai, is finish your sword practice and then place your sword on its stand.  You won’t be needing it, Inked isn’t that kind of game.  Instead, it is about progressing from screen to screen, from level to level.  That generally means there is a gap somewhere and you’ll need to make a platform or bridge appear.  To do this, you’ll be faced with various puzzles.  You might need to weigh down a platform, get a ball to roll into a hole or fill an area with water in order to activate some sort of switch. 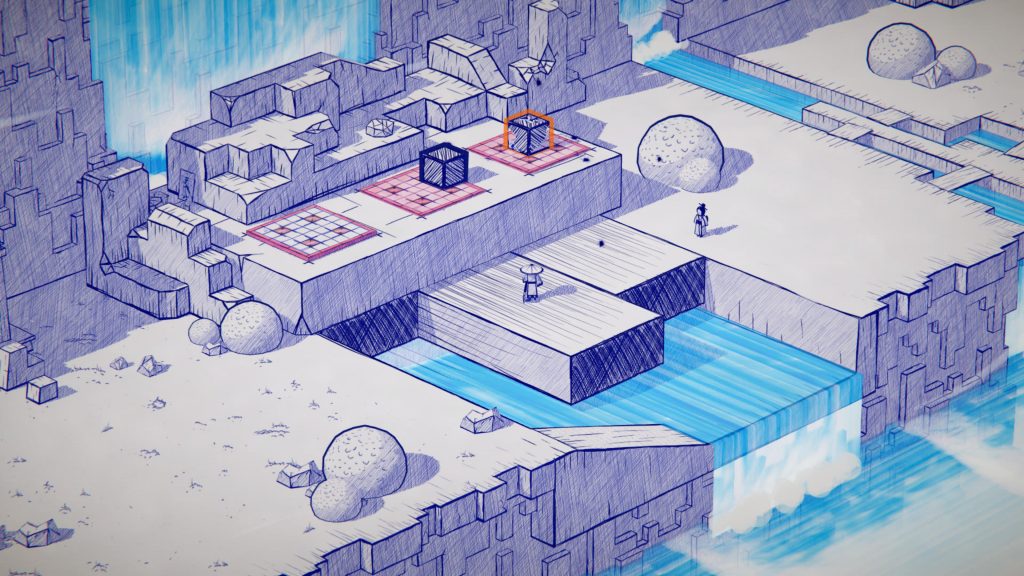 It’s a little like how puzzles work in Tomb Raider and Zelda games but in a much more minimalist kind of way.  Usually the solution isn’t too hard to figure out and the game doesn’t chain elements together to make the solutions super complicated.  This is good as games like Hitman Go get on our last nerve when they expect you to chain together a sequence of fifty moves to beat a level.  We prefer our puzzlers to be like this with logical solutions that don’t rely on a ton of trial and error.

Along the way Inked adds new elements to the vary things up a little but you’ll really still be approaching the game the same way.  There’s always a danger that games that do that can feel like extended tutorials but Inked swerves that feeling although, and this is pretty common with indie games, you sometimes get the feeling the level designers had more fun making the levels than you’ll have solving them.  At times the levels can feel like creations rather than just a series of tasks and that’s great from a cool, artistic point of view but not always a recipe for engaging gameplay. 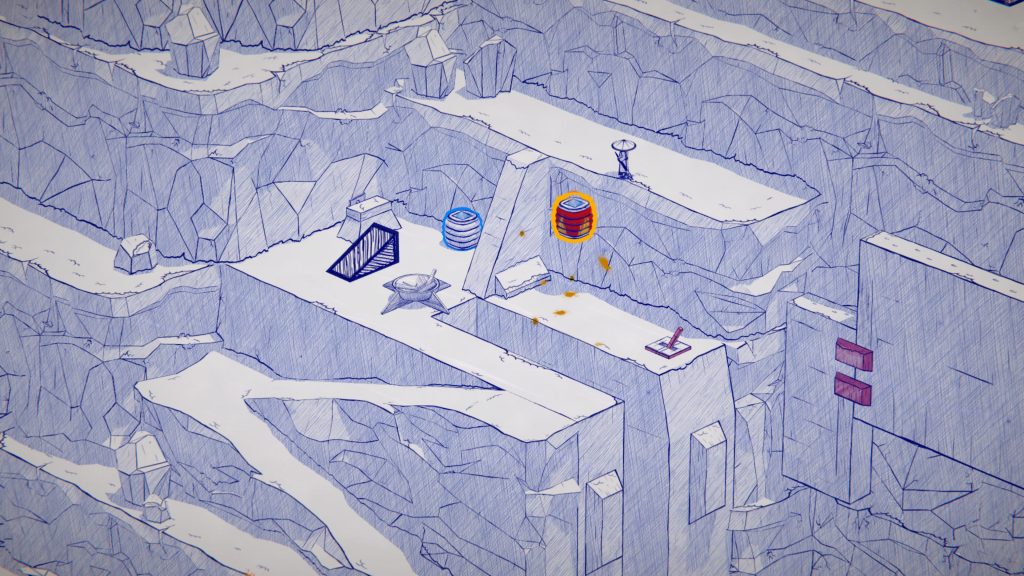 That said, we managed to get through the game without getting bored or too frustrated.  Indeed, the levels and individual puzzles were pretty light which suits us just fine, the only issue really came from the controls which aren’t terrible but they do use

to pick up and place pieces while

selects the next available piece to pick up.  We, pretty much constantly, kept pressing

which would make us drop the piece we were trying to place.  It probably works great with a mouse and keyboard set up but for some reason we never quite got used to it on the controller.  Also, the isometric viewpoint made placing pieces a little tricky too.  It’s never game-ruining but it was a minor hassle.

Curiously, as a remake of the original Inked, this game does away with a couple of gameplay elements.  There are no first-person sections (you used to be able to do things as the artist) and you can no longer jump.  The game is also really just going to last you an afternoon or two.  That said, these changes really just refine the game down to a point of minimalism that it already seemed to be striving for.  If this game was twelve hours long, it wouldn’t be able to sustain itself.  3-4 hours is just about right (although you trophy hunters will need to play it twice to get it maxed out).

But look, there are some games where the gameplay and the presentation are given equal parity of esteem and others even focus more on the latter.  Well, Inked is a bit like that.  That’s not to say the gameplay isn’t good because it is, even if it is maybe a tad repetitive and too streamlined but the star of the show here is the presentation for sure.  It’s the reason for the game’s title and certainly the best thing about the game as a whole. 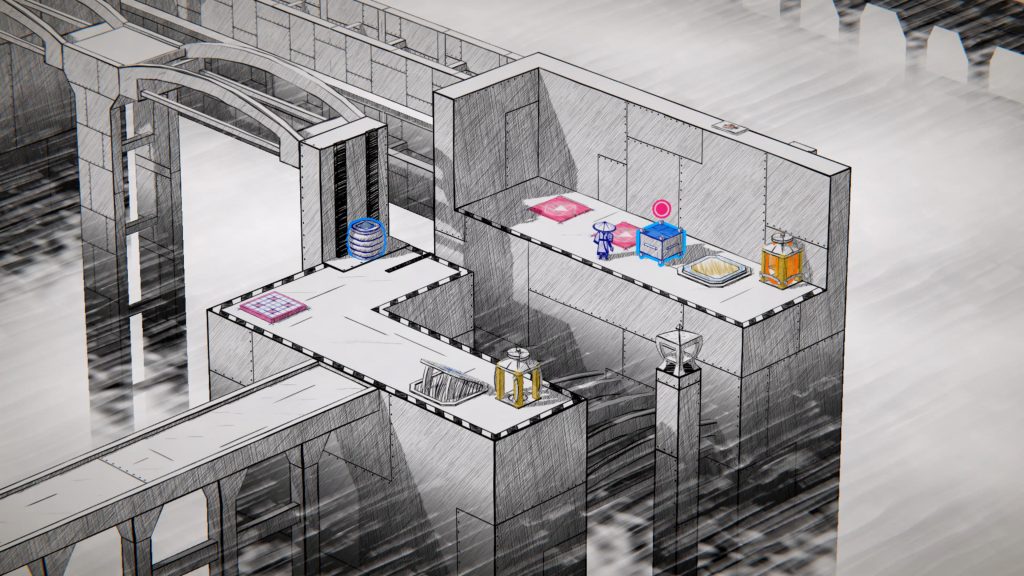 As you can see from the screenshots, the game uses a hand-sketched visual style but in a forced isometric style.  It’s a very clean look, echoing some of the isometric games from the 1980s, but really tasteful.  It looks fantastic and, thankfully, the visuals don’t get in the way of the gameplay all that much.  Occasionally, judging where you put an object can be a little tricky as we said before but there’s no real time pressure so there’s no worries if you mess it up.

Along with the game’s calming music and occasional pieces of artwork (these tell the story behind the story), the presentation is just so nice.  Sure, it could be seen as a bit gimmicky but when something looks this nice, we’re happy to just look at the upsides the aesthetics bring.   And to be honest, that’s almost enough to recommend Inked to you, almost as a piece of interactive art rather than as some sort of essential puzzle game experience.  It’s cheap, reasonably short and gorgeous and for some gamers, that’ll really work.  If you want a complex, brain-busting puzzler, this won’t be for you.

Inked: A Tale of Love
8 Overall
Pros
+ Gorgeous visuals
+ Good, streamlined puzzle gameplay
+ Game length is short but that's right for this sort of game
Cons
- Controls are a bit of a faff
- Puzzles might be a bit too simple for some
- Is a bit repetitive
Summary
We're not sure that Inked's puzzle-solving gameplay will turn many heads but its drop dead gorgeous visuals will.