Deathloop has the weird distinction of being published by Bethesda, recently bought by Microsoft, but is a timed console exclusive on the PS5. Made by Arkane Lyon it has a lot in common, gameplay-wise, with the Dishonored series but is very much its own thing. 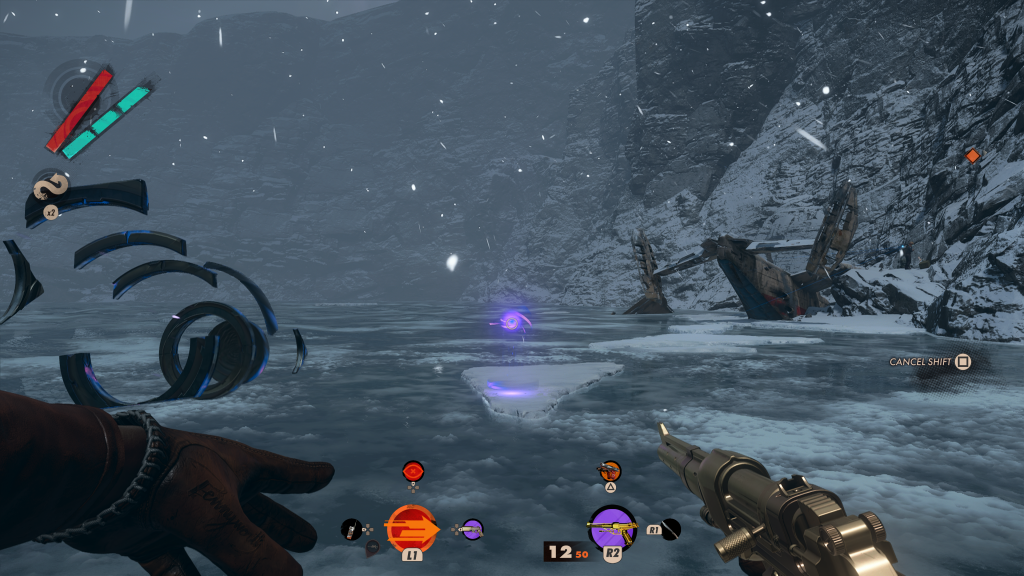 You play as Colt, who wakes up on a beach with no memory of how he got there. You’re guided to move forward and provoked over a radio by Julianna, who knows a lot more about your situation than she’s letting on. This is the tutorial area that will give you a gun, a machete, your ‘hackamajig’ which lets you hack objects from a distance, a trinket which gives you a buff and will introduce you to the concept of ‘looping’.

Deathloop has a Groundhog Day mechanic where every day is the same. Reach the end of the day and the next morning will be the same morning, die and you’ll wake up that morning again. Colt is able to remember things from previous repeated days however, so you go through the game learning new things, whether that’s codes for doors or people’s routines.

Each day is split into four sections: morning, noon, afternoon and night time and your goal is to kill the eight Visionaries in a single day and break the loop. They all want to live this day over and over, Colt wants out. The Visionaries know you’re out to break the loop and they know that if they all die then you’ll get what you want so you won’t find them in the same place, unless through repetition and learning you manipulate things to your advantage. 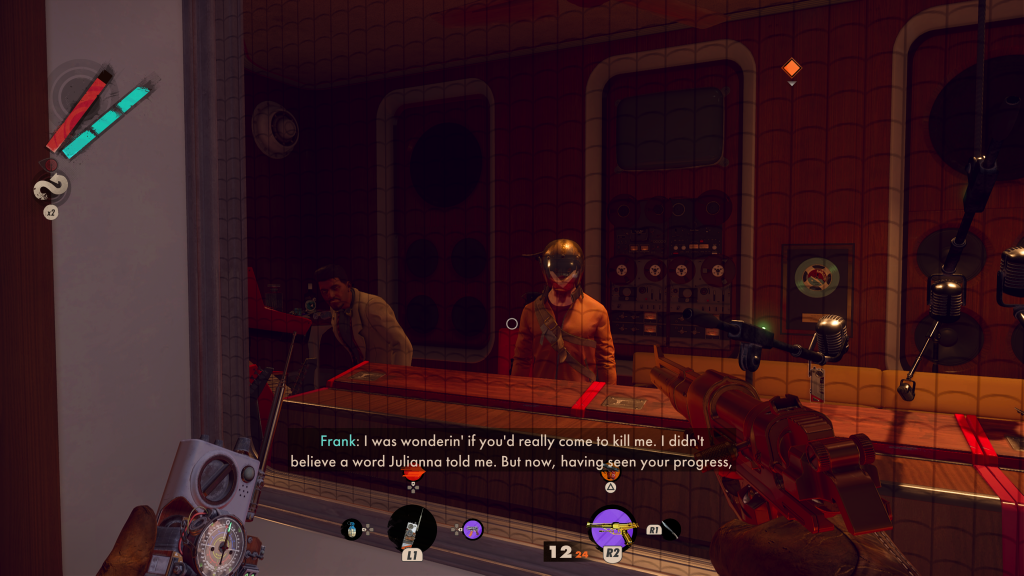 As with the Dishonored series you play from a first person perspective and have some decent manoeuvrability to get around the four different regions. There’s a verticality to the levels, as well as stealth opportunities if you want to avoid getting into a gun fight. You start with a double jump trinket and each Visionary has a slab which you can take once you kill them which will grant you another skill. The Shift ability will be recognisable to Dishonored fans as you can warp a short distance forward for the cost of some power, but others will grant invisibility for a short time or tether enemies together so that what happens to one happens to all.

Colt starts with a Slab of his own which allows him to die twice before restarting the loop. This is helpful as you can’t save mid run, autosaves only happen at the start of each time period so having that safety net is useful. Once you get a decent arsenal of slabs, trinkets and weapons Deathloop isn’t that hard but if you’re under a lot of fire Colt’s health does drain away quite quickly. You can infuse the weapons, slabs and trinkets you want to keep for future runs using Residuum, which you can collect from random glowing objects or from the Visionaries you kill. If you die you drop that Residuum but you can retrieve it as long as you don’t die permanently. 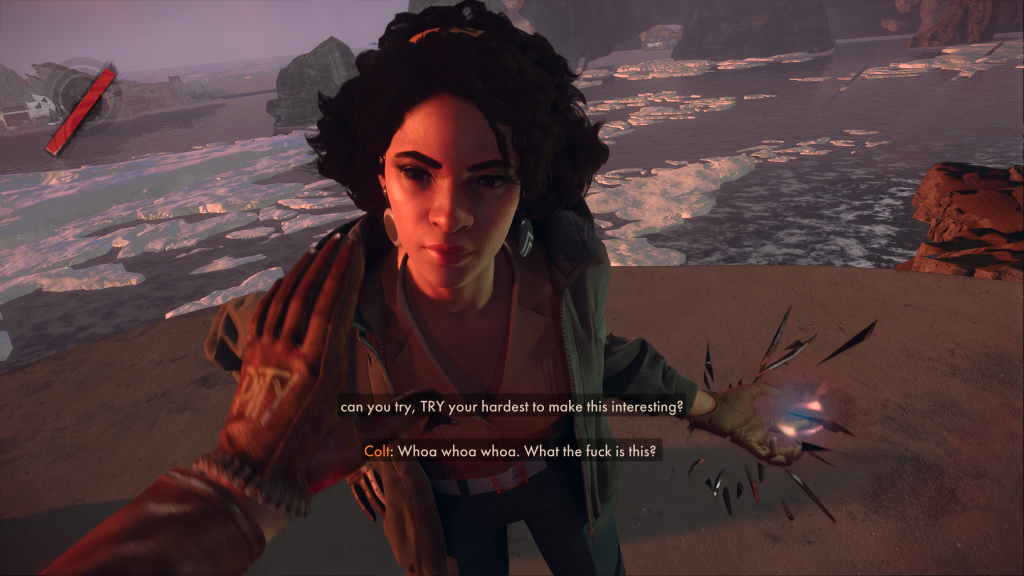 Julianna, who talks to you on the radio throughout the game, is also a Visionary but she’s different in that she’s hunting you rather than the other way around. She can turn up whilst you’re exploring and the game warns you that she’s on the hunt. If you’re in online mode then this can be another player otherwise the AI will invade you. If you choose to play as Julianna then you’ll search for a compatible game to connect to and load into someone else’s world where you must hunt them down. As you gain experience you earn all the same upgrades that Colt can find to make the battle more interesting but Colt has those multiple lives to give him an advantage. I was never one for invading in the likes of Dark Souls so after a short dabble I’d had my fill but I expect certain people will very much enjoy this mode once they’re done with the main game.

Speaking of I’ve heard people say the game is short and to that I’d say it depends how you play it. I’m the type of person who in a Metroidvania title will get a new skill and then go searching to find all the places I can use that skill, rather than progressing the story. I know that means I’ll just come across more dead ends and it’ll be faster to get all the skills and then go searching, but I do it anyway. Deathloop is similar. The game tracks your objectives and will give you quest markers to follow and if you do that to the letter and only that then you’ll get to the end reasonably quickly. If you treat each time period/area as a Hitman level, with extraneous things to find and different ways to kill the Visionaries then it’ll last you a lot longer. 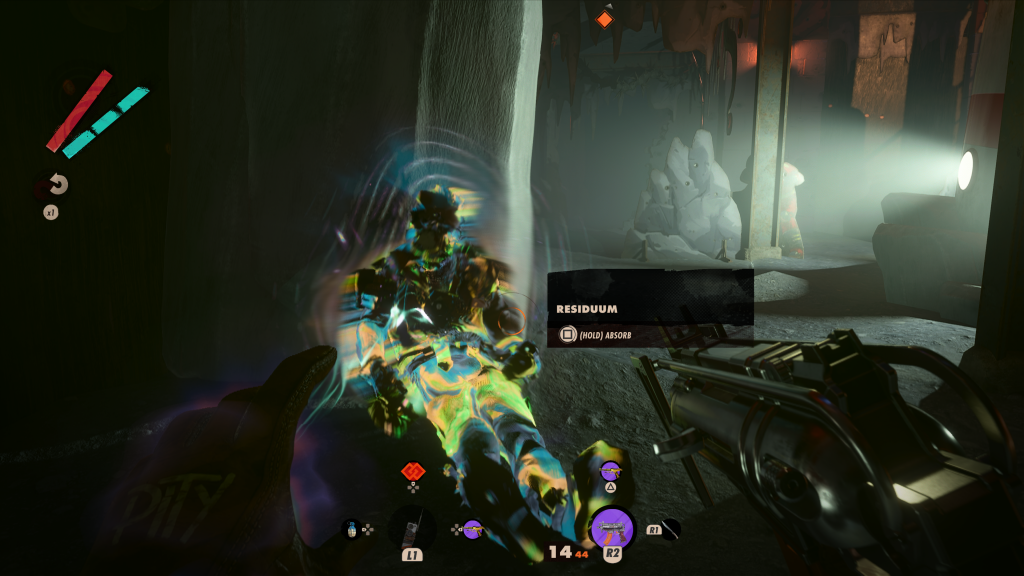 Like my approach to Metroidvanias this slowed me down and made an already repetitive game by design more so. I probably should have just followed the markers and blitzed through the story as you can continue attempting runs after the credits roll but that’s not how I tackle games generally. If you explore then you’ll find lots of opportunities for secrets, special weapons and trinkets as well as lore.

The story is one of the strongest parts of the game, with the intrigue of why the loop exists, why Colt wants out and why Julianna and the others want in. It’s not fully fulfilled by the end credits but it does drag you forward through the game. The interactions between Colt and Julianna are excellent but the other Visionaries each have their own personalities and quirks too. It elevates what is a run based game, with repetition at its heart and that’s improved further by clever time based shenanigans.

Being a PS5 game you’d expect it to look great and you’ve got a few options to choose from in that regard. There’s a mode that uses ray tracing which is limited to 30fps but does definitely look the best (in stills) with some great lighting. Then there’s a 60fps mode that doesn’t have ray tracing but a high resolution which means it doesn’t run at a locked 60. Finally there’s a 60fps mode with a lower resolution which does hold 60fps throughout. 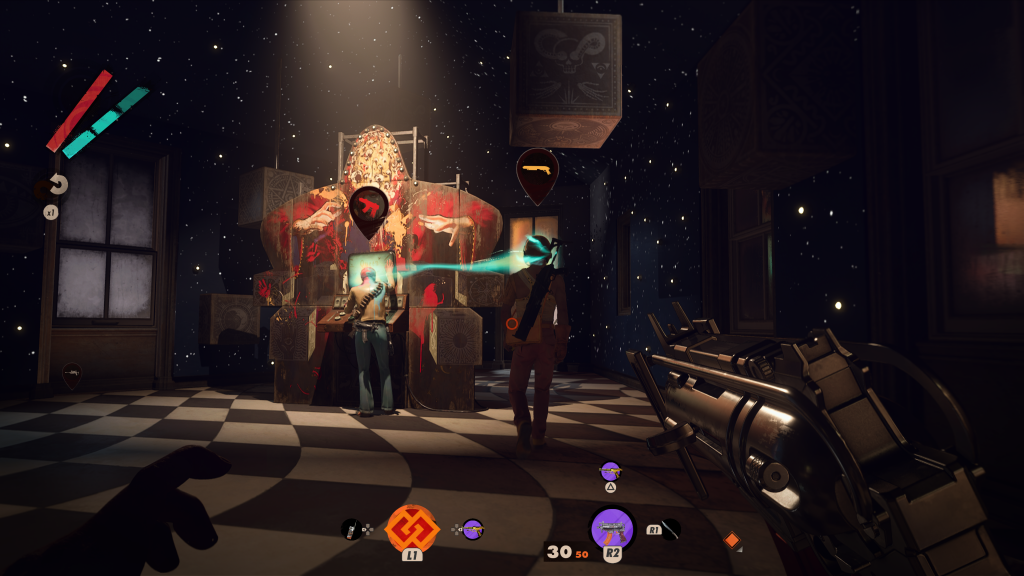 I started off with the ray traced mode and it looked very nice, but then I got into a fire fight in the early game and it turned into a slide show. Only for a few seconds which implies that it’s something other than the visuals to blame but it was awful enough for me to change it instantly. Unfortunately the same thing happened in the higher resolution mode so I turned to the performance mode and never looked back. It still looks fine to my eye, with the design being strong and only the odd flickering texture or shadow being an issue. The slideshow only happened that one time on each mode so wasn’t consistently bad and can hopefully be patched but it was unplayable for those seconds.

The DualSense gets some love as well. The radio and voice recordings come through the speaker on the controller and certain movements get some nice vibrations. If you’re creeping you can’t feel anything but if you’re stood upright then each footstep creates a little rumble and running and sliding more so. The triggers get used when firing weapons. Each use is subtle enough for you to barely notice at times but definitely adds to the whole package.

Ultimately Deathloop is a very fun game. I did find it repetitious early on and by its very nature it is, but I think if I’d just ploughed through the story and then started to experiment after that it would have been a smoother ride. The story, different situations that your actions can create and range of powers are all great though. Sure, you can kill a Visionary from afar with a gun but why not experiment with a trap or manage to sneak up for that personal touch? 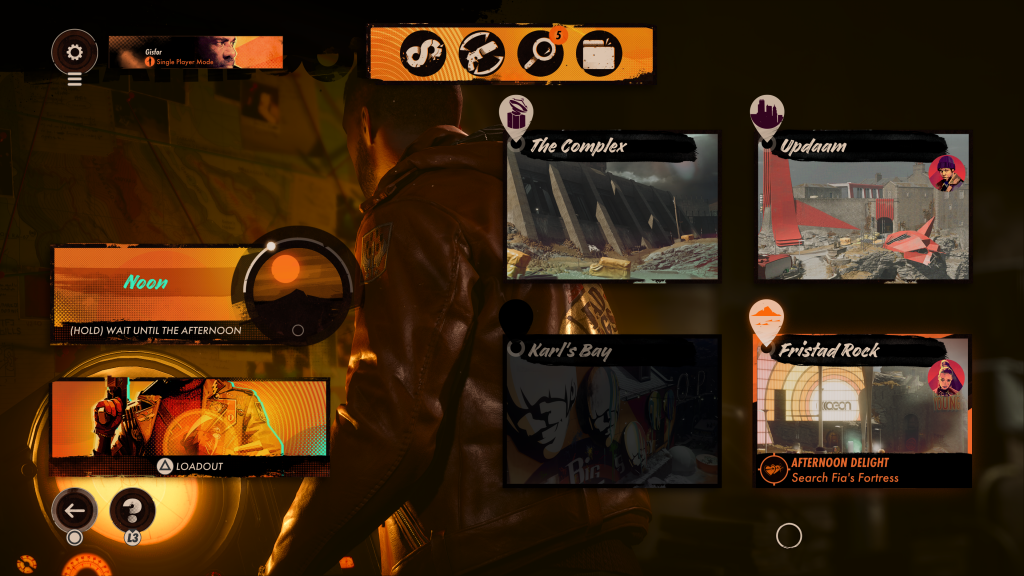 It’s a very well made game, as you’d expect, with a strong concept that mostly delivers. A couple of patches to improve performance or create a 60fps mode with ray tracing like Insomniac did would be wonderful, though I’m not sure how likely that is thanks to the Bethesda acquisition, but even as it is Deathloop is a great way to spend a day. Over and over.

Deathloop
8 Overall
Pros
+ Well executed concept
+ Great characters
+ Fun powers
+ Subtle use of DualSense adds to immersion
Cons
- Can be repetitive
- Holds your hand tightly through the story
- Some technical issues with certain visual modes
Summary
Deathloop offers a fun, time bending romp. The story is intriguing and the characters, butterfly effects and abilities are the strong points only hampered by a lot of repetition and the odd technical hitch.